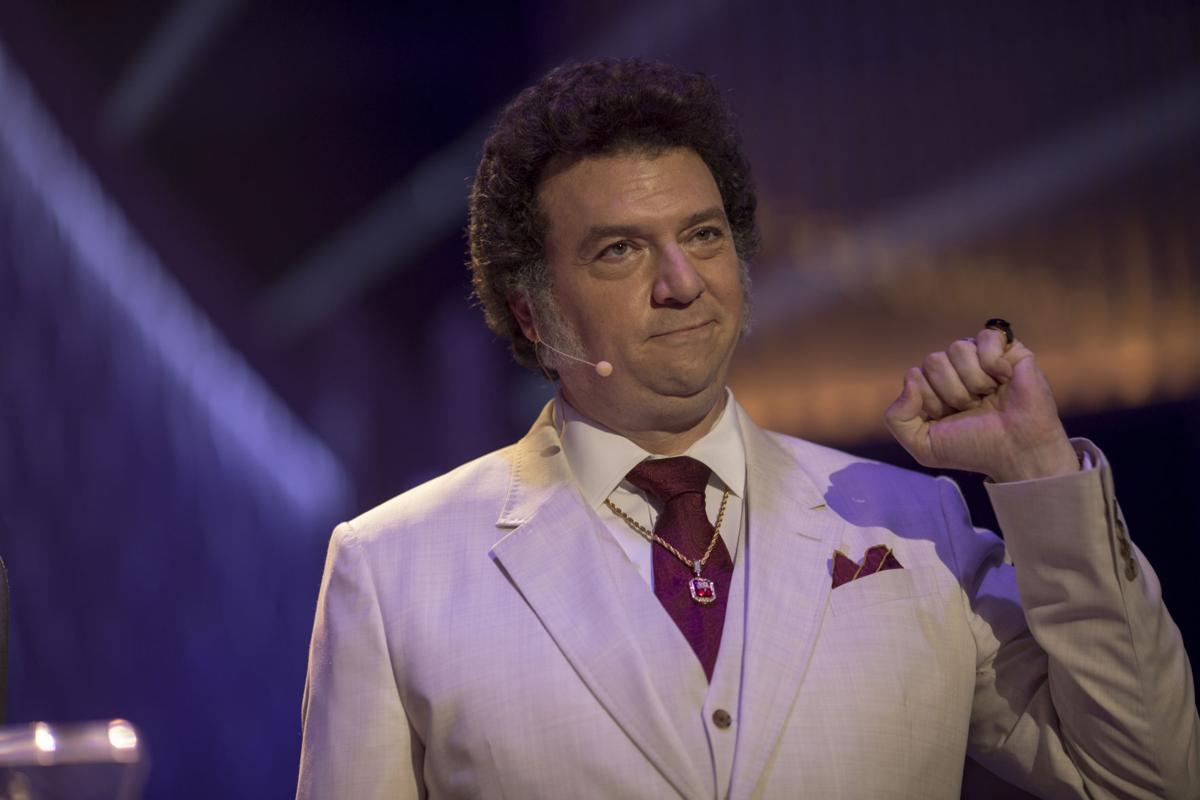 In an exclusive interview with The Post and Courier, Danny McBride talks more about "The Righteous Gemstones." Provided/HBO 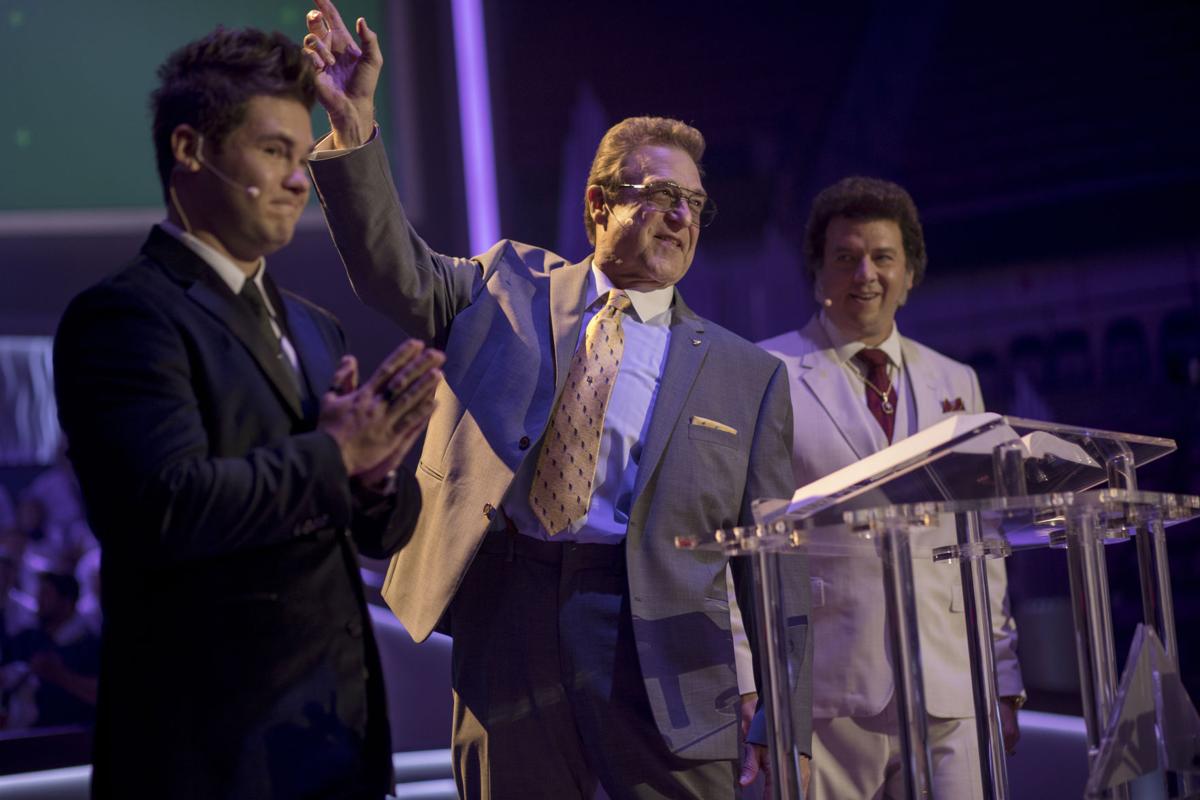 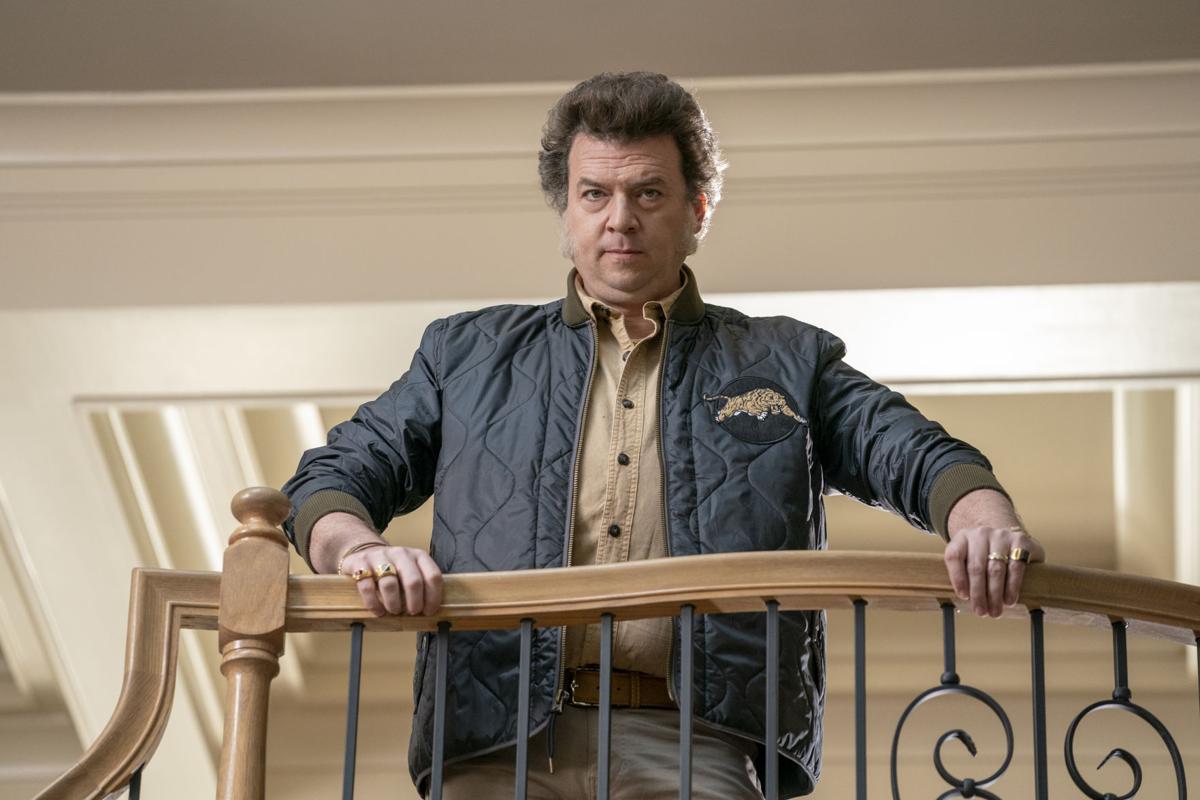 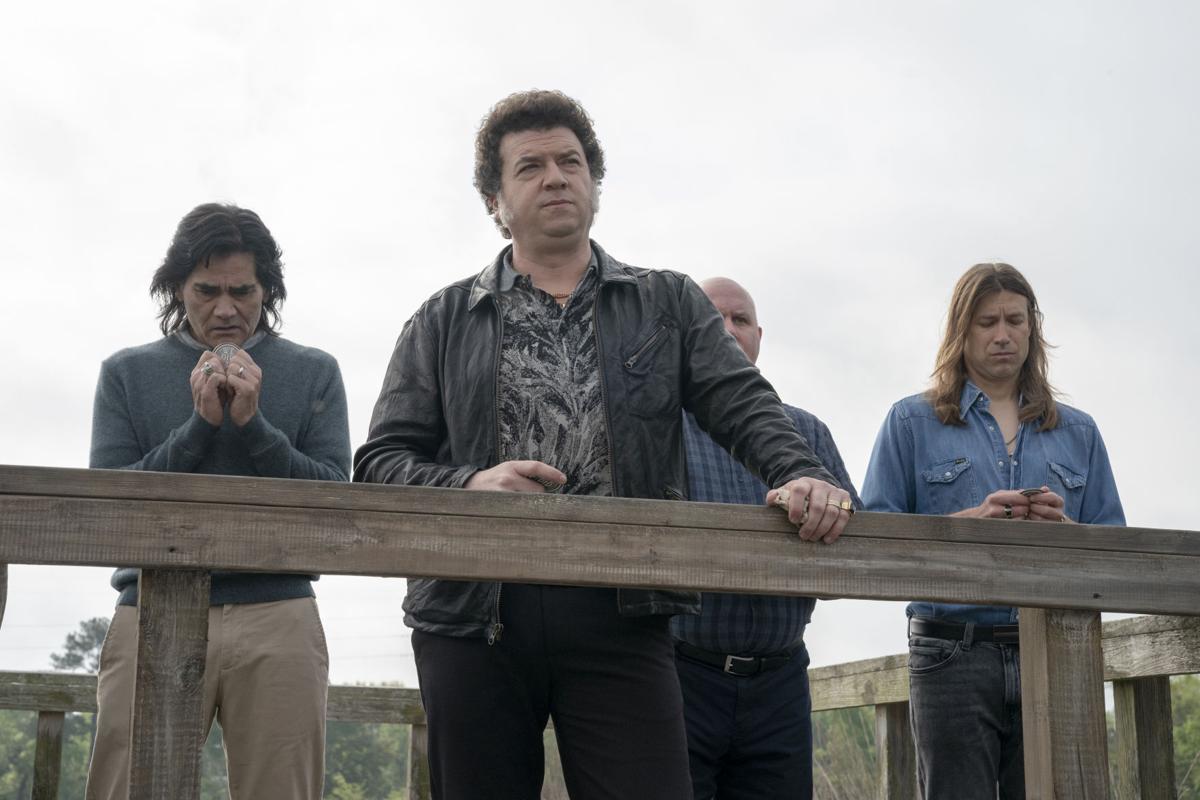 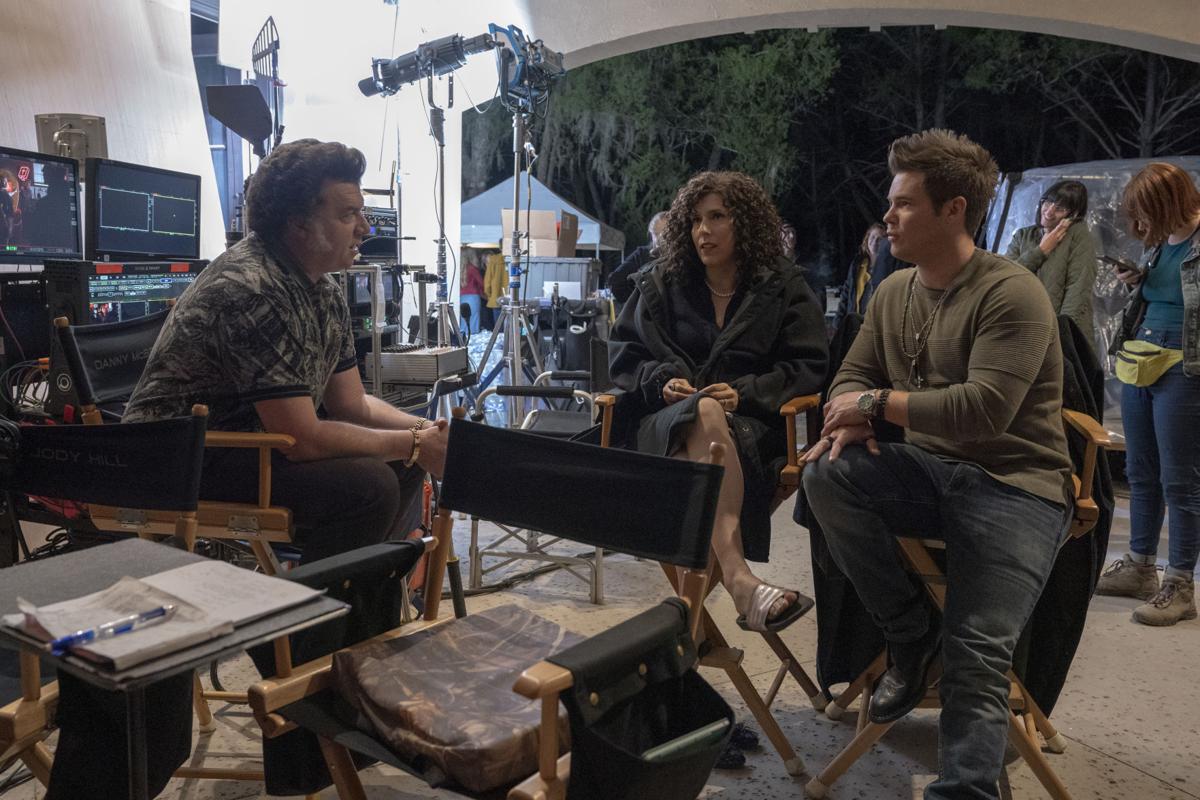 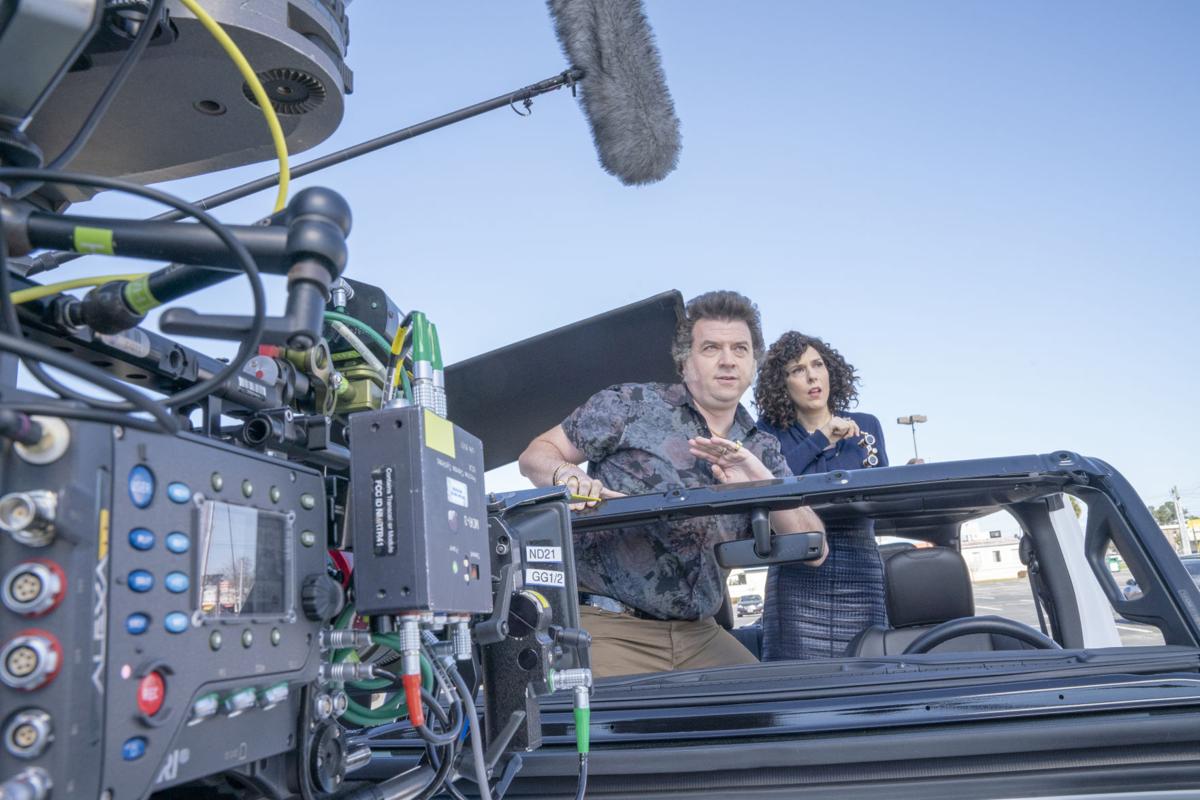 Danny McBride and Edi Patterson in "The Righteous Gemstones." Filmed in Charleston, the comedy series sought hundreds of local crew members, actors and extras to be a part of the production. A few of them chatted about their experiences on set. Provided/HBO 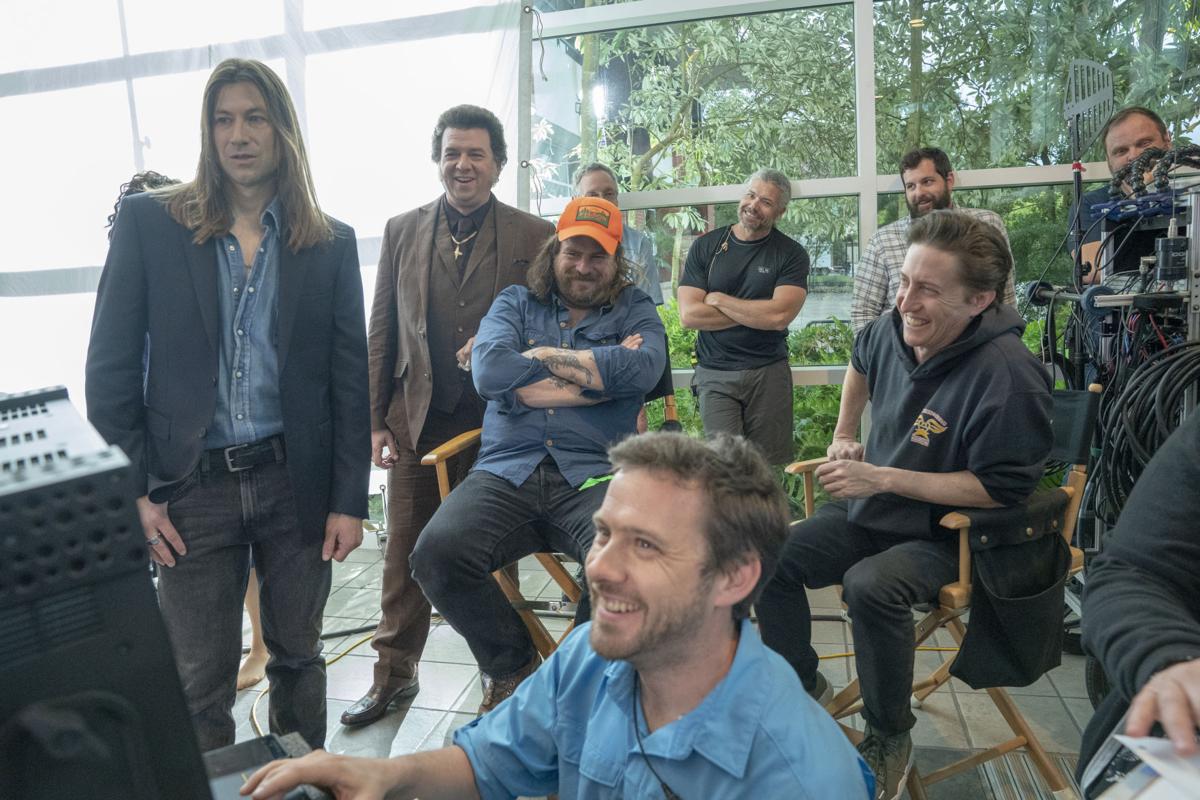 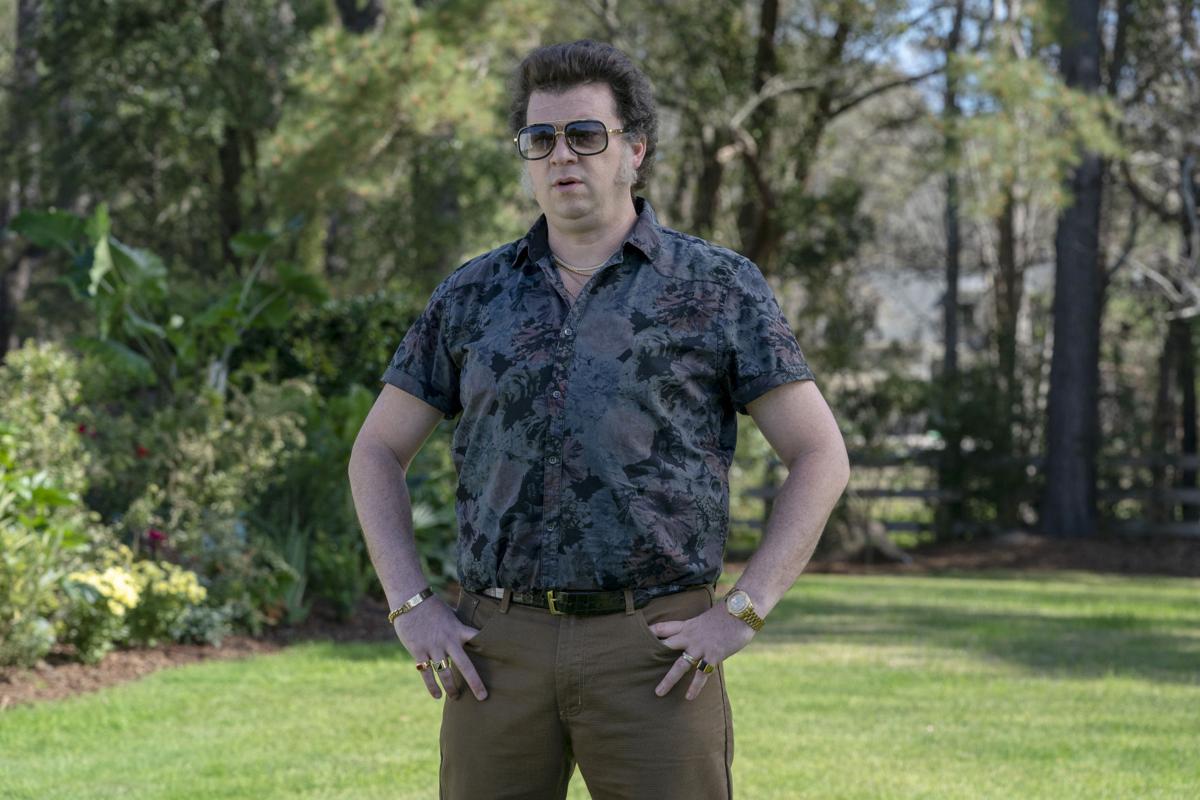 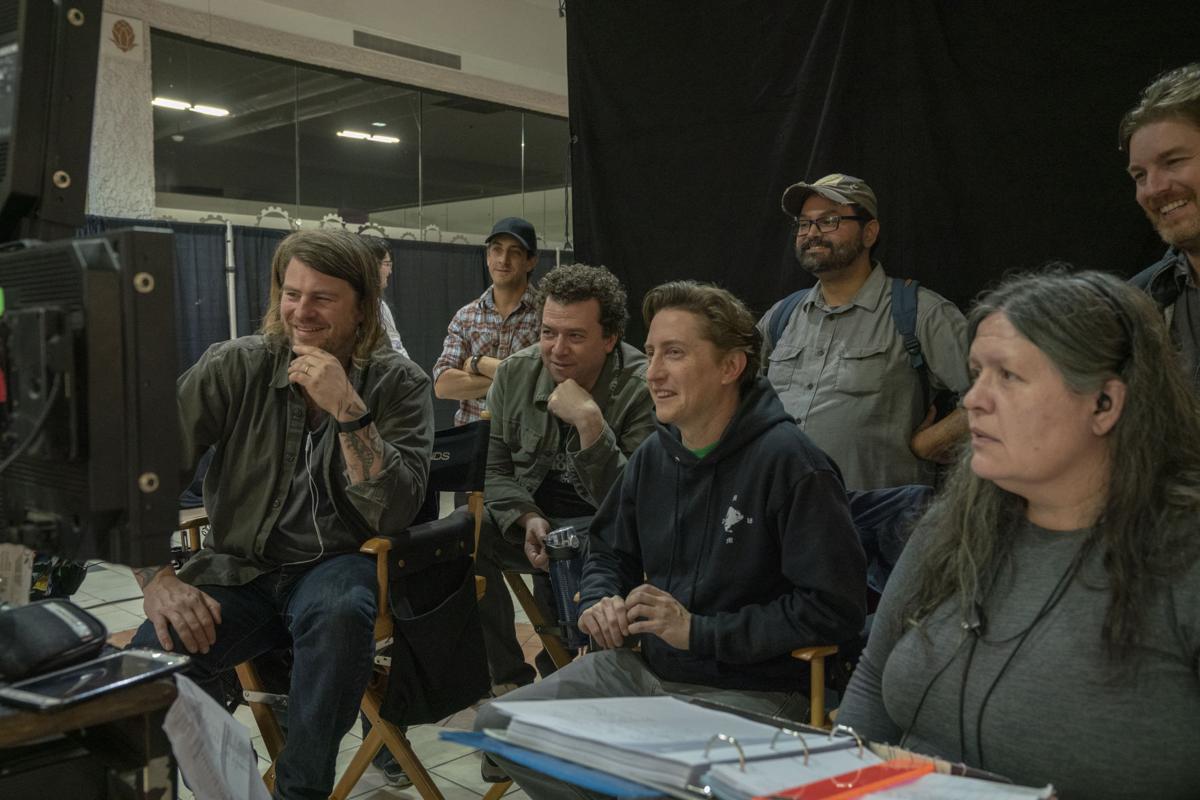 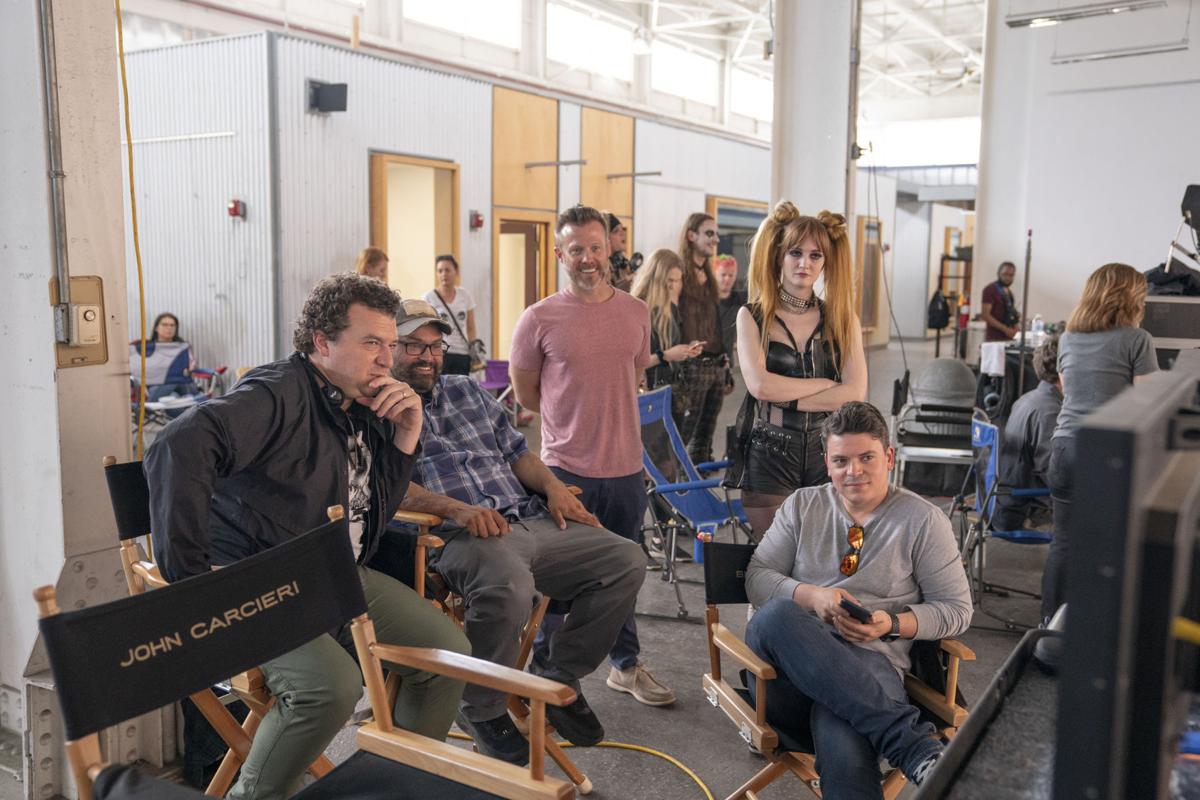 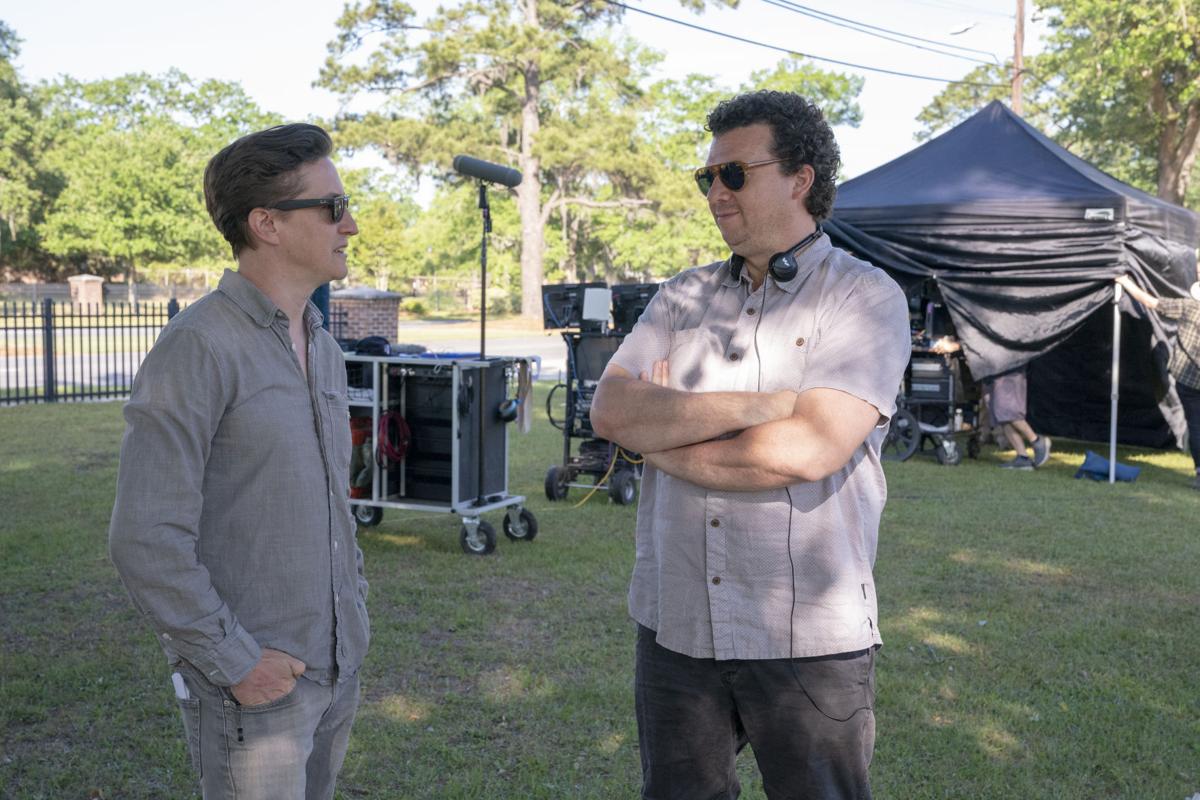 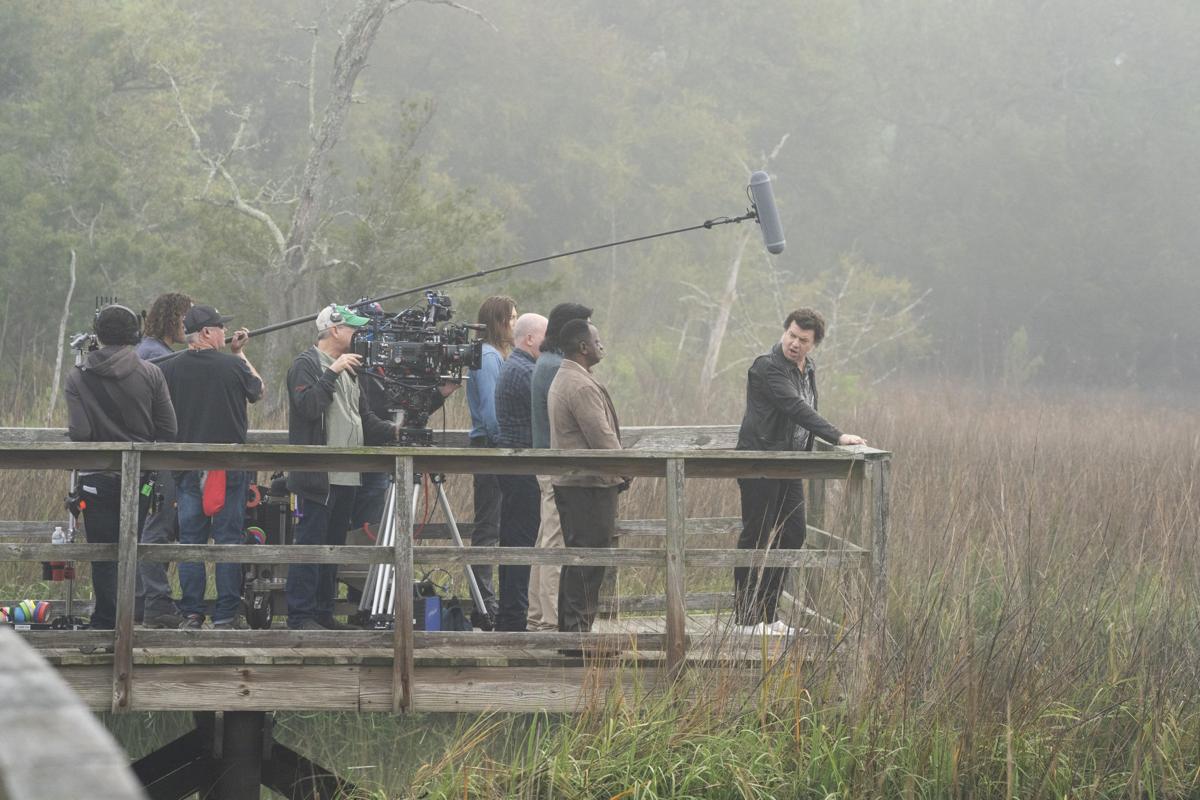 In an exclusive interview with The Post and Courier, Danny McBride talks more about "The Righteous Gemstones." Provided/HBO

Danny McBride and Edi Patterson in "The Righteous Gemstones." Filmed in Charleston, the comedy series sought hundreds of local crew members, actors and extras to be a part of the production. A few of them chatted about their experiences on set. Provided/HBO

At Danny McBride's TV and film production house in Charleston, there's a peculiar painting hanging in the entryway.

A masked kid in a red-striped T-shirt, with spray paint in his hand and a suspicious looking possum on his trail, rides his tricycle away from a burning home. The white picket fence that the tricycle has busted through could hail from anywhere, America, but the home's black hurricane shutters are decidedly Charleston, where McBride — along with his family and production partners — decided to relocate from L.A. a few years ago. The blazing building reads "Rough House," the name of the production studio.

The picture seems to sum up the quirky, no-holds-barred vibe of this up-and-coming company, best known so far for its work on the mega-hit remake of "Halloween" and HBO comedy "The Righteous Gemstones," both of which have been filmed in Charleston.

Actor-comedian-producer-director McBride saunters into the conference room wearing a black T-shirt and jeans and holding a lime La Croix. A steer skull is mounted to the wall, above framed posters of movies that haven't yet hit the big screen — one features Nicholas Cage, another Seth Rogan.

"The Righteous Gemstones," which stars McBride, John Goodman, Adam DeVine and Edi Patterson, premiered Aug. 18 to the most HBO viewers since the debut of McBride's other brainchild, "Vice Principals," in July 2016. "Gemstones" is about a family of greedy televangelists with debaucherous tendencies.

The first season's finale episode is this Sunday. The show has been renewed for a second season.

"We always set our shows in the South, so we didn't want to shoot them in L.A.," says McBride, who first got a taste for the Palmetto State when he filmed "Eastbound & Down" in Myrtle Beach in 2008.

"It always has felt more like our home here from a production standpoint anyway," says fellow Rough House producer Brandon James, who adds that his parents have lived in Charleston since 1995, and he used to visit as a teenager. Other Rough House production partners include David Gordon Green and Jody Hill.

McBride says that the Johns Island oak trees seen within the Gemstones' compound, and the North Charleston parking lot used for the blackmail scenes, helped make "The Righteous Gemstones" unique and authentic.

"They're not the kind of locations you see in the middle of Los Angeles, or even in the valleys," he says.

And businesses are a lot easier to work with here, like the North Charleston Coliseum, which served as the Gemstones Prayer Center where church services were held, McBride adds.

"We wouldn't have been able use the Staples Center for probably five minutes," he says with a laugh.

James agrees, adding, "The people in L.A. are a lot more film savvy, but people in Charleston aren’t as jaded. There's still magic in it. People here are excited about it the same way we are."

In L.A., Rough House was a small fish in big pond.

"Out here, we’re able to contribute to the community in more ways," James says.

McBride says that living here has inspired his writing. For example, the red van that the blackmailers drive in the show was parked down the street in his neighborhood.

"There would be days where we'd be in the writers' room and I'd be, like, stuck trying to figure out what we needed to do, what car the blackmailers were going to drive," he says. "And then I would remember driving to work and looking in my rear view mirror, and I would just see that red van and think about how cool it looked."

Unlike L.A., where his former neighbors from more than two years ago called him the other day to ask if his power was out (thinking he was still next door), McBride says he knows all his neighbors in Charleston. He says it's a more friendly and laid-back lifestyle — one that he, his wife and son have embraced. They go out on the boat, they eat at Leon's, they scavenge for shark's teeth at the beach.

"It makes me lazy. I feel like I've already retired," McBride says with a chuckle.

McBride was raised in Statesboro, Ga., and then Quantico, Va., as a Southern Baptist. His family is religious, one of the reasons he likes to walk the line between being funny and outrageous in "The Righteous Gemstones," without slipping into offensive territory, he says.

"We have writers of different faiths and different backgrounds, and there's even just my own background with religion," McBride shares. "I think it's just keeping them all in mind. ... At the end of the day, I think it's just, like, people who go to church are not the butt of the joke here. To me, it's just a world that seems fun to set a story in, and also the growth of these megachurches says a lot about just where America is at."

The Rough House headquarters serves as writers offices for the first part of a production and then the editing space for the second half. It will serve as the post-production location for "Halloween 2."

The first new film of the classic thriller saga, written by McBride and production partner David Gordon Green, was filmed in the Holy City. But because of the limited film incentives that South Carolina offers, the second has been moved to Wilmington, N.C.

"Unfortunately, right now, there's really only room for three productions a year in South Carolina," McBride says. "And it might seem like, 'Well, that's more than enough,' but what happened this year was all three shows were happening at the same exact time. So, like, only one of the shows can really staff locals, and then you're pulling people in for the other two. And then once those shows are done, there's like months of no work for anyone."

James says there's a big impact on local businesses and jobs when a crew comes to town, and not just in Charleston but throughout the state.

McBride says it can be the difference of a million dollars in incentives that determines which state a movie will be filmed in, especially ones that are already operating on a small budget.

"A filmmaker will probably go to wherever they'll have more time and can put more effort into the product," McBride says. "That does end up driving a lot of it."

Rough House's goal is to double the incentive money in South Carolina for next year to make the Palmetto State more competitive with North Carolina. They want to bring any future "Halloween" installments back home.

One thing we know for sure, though, is that "The Righteous Gemstones" will be returning to Charleston next season with the same crew and a lot of the same cast members and extras. Filming will start at the beginning of next year. As for the finale episode of Season 1, McBride promises it will be a "wild ride."