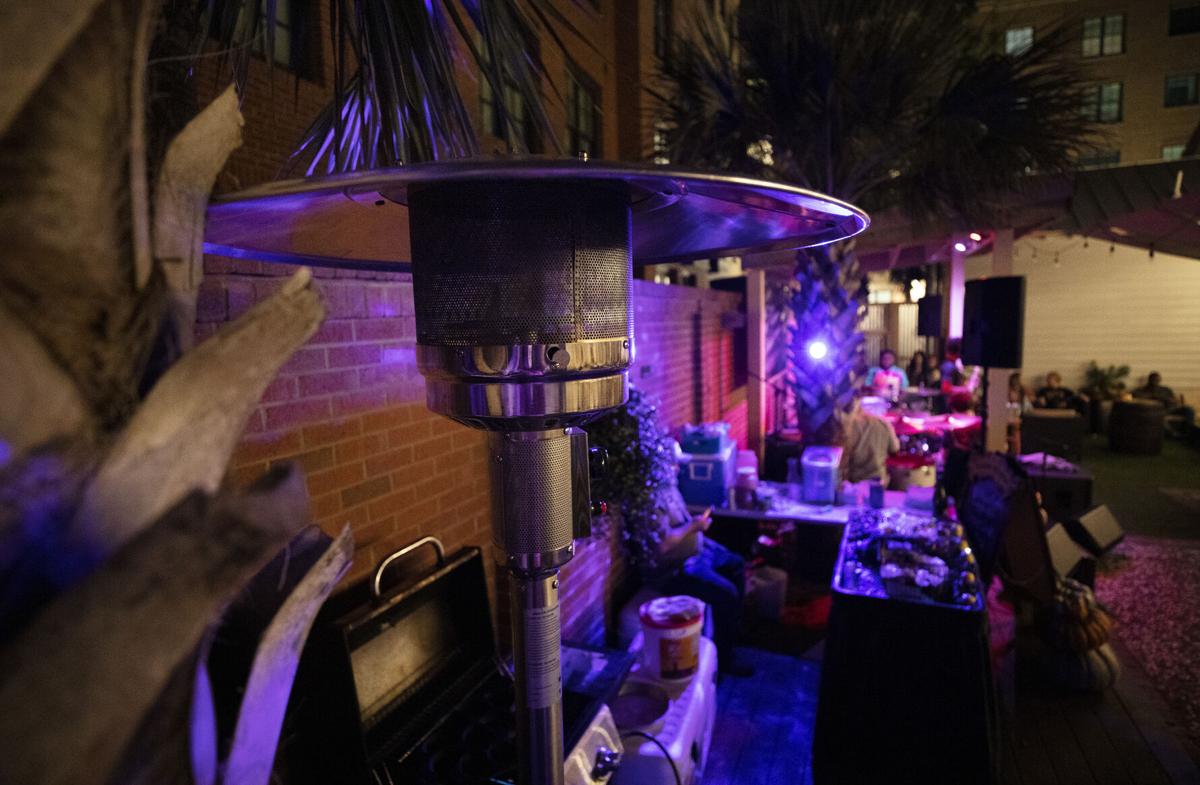 Space heaters are ready to use for cold weather at Tobin’s Market Monday, Nov. 9, 2020 in Charleston. Grace Beahm Alford/Staff 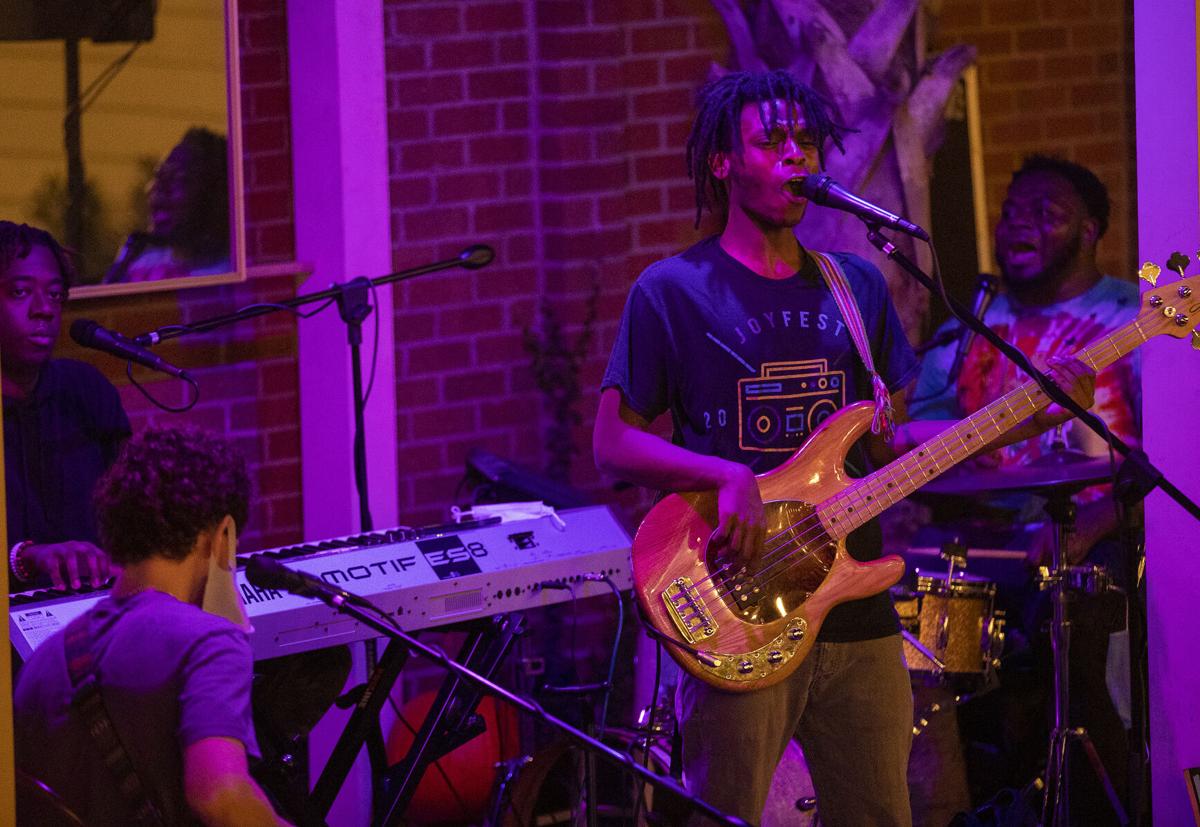 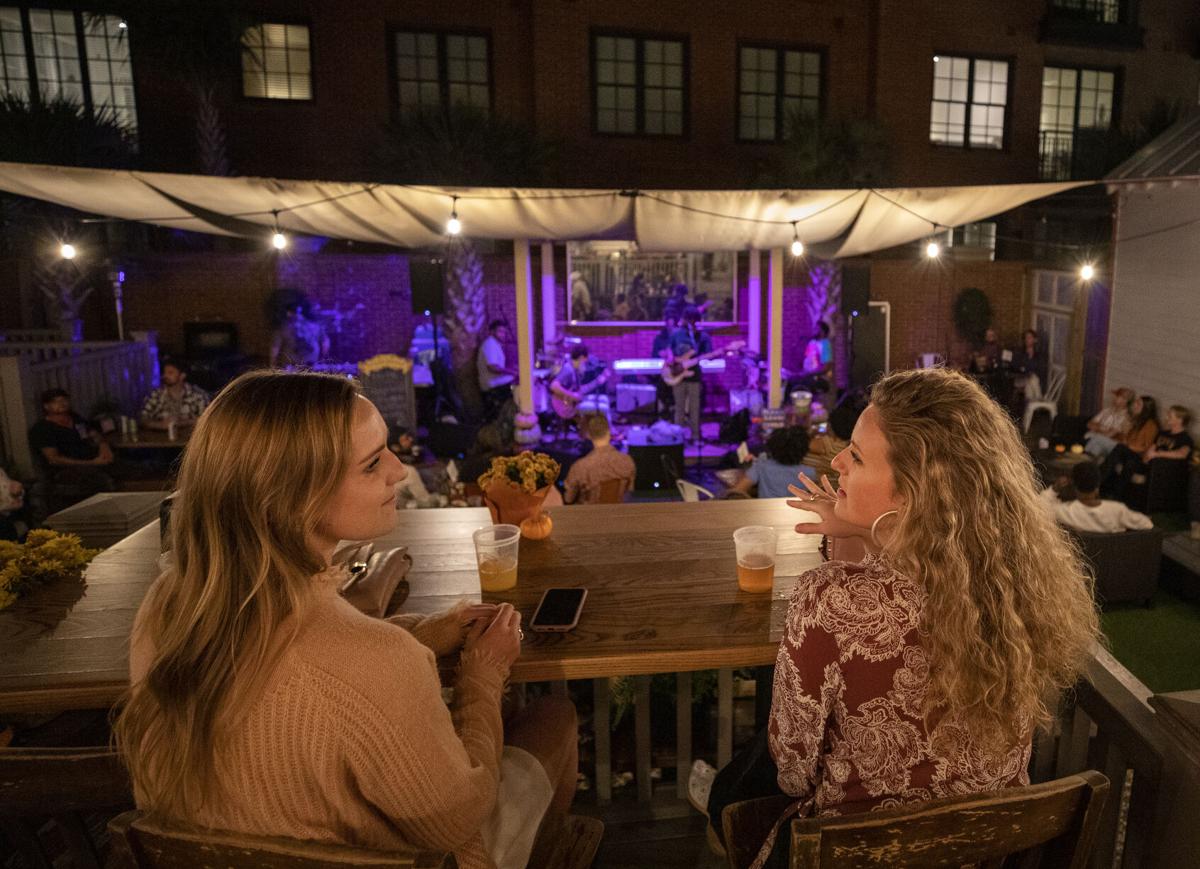 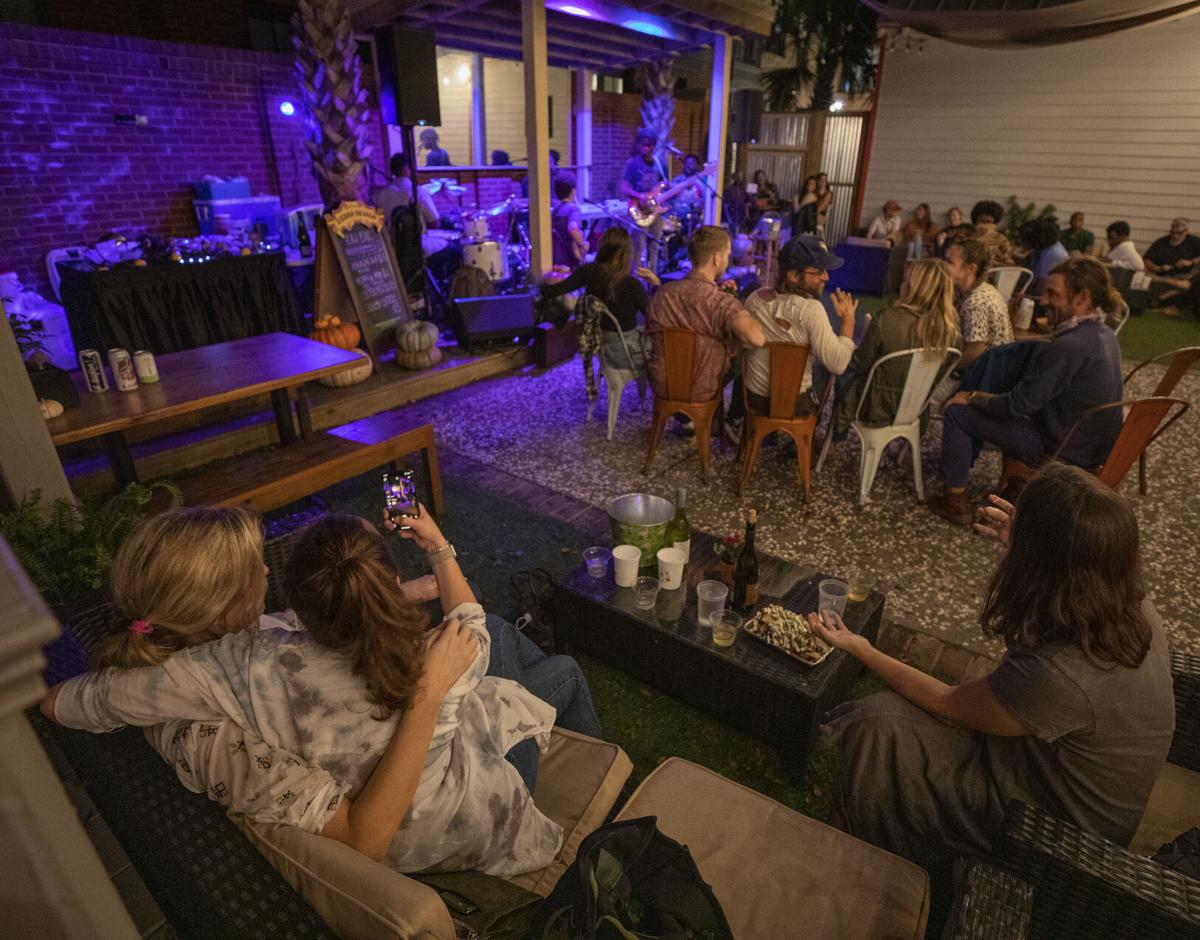 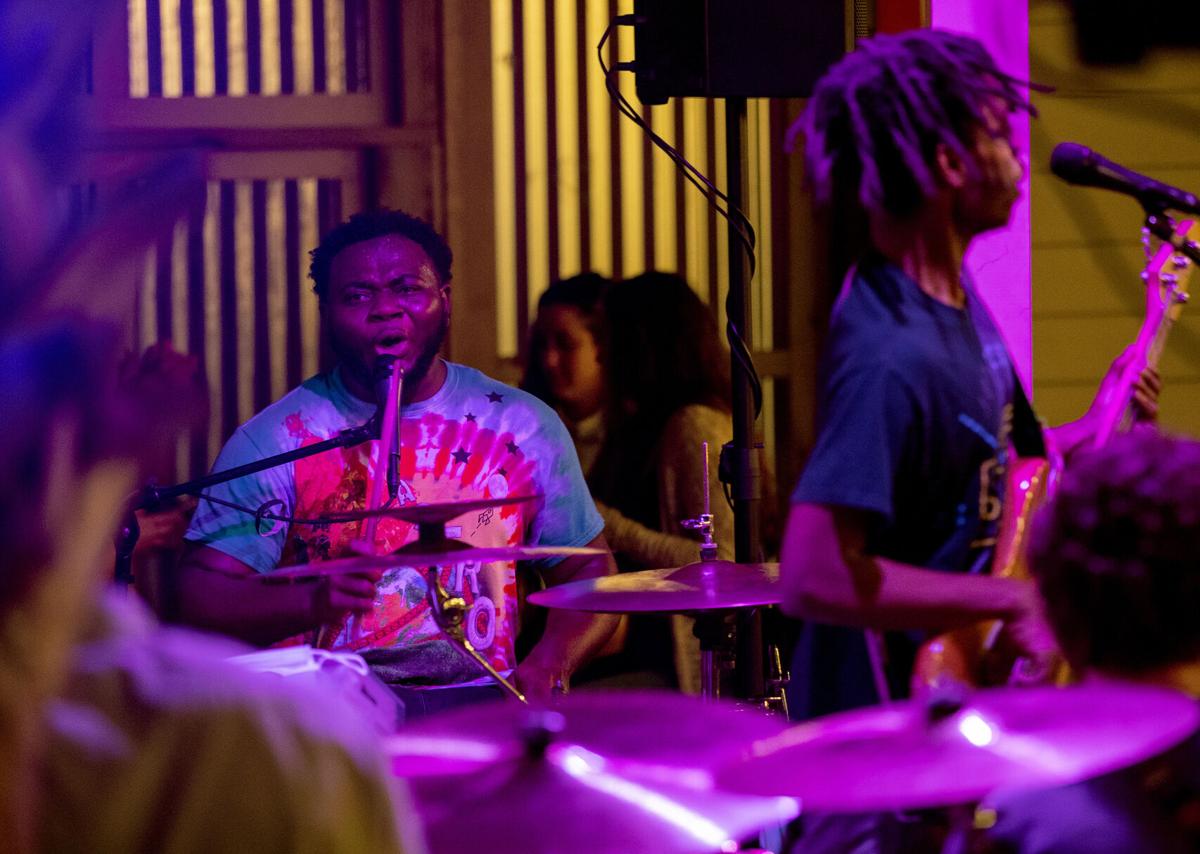 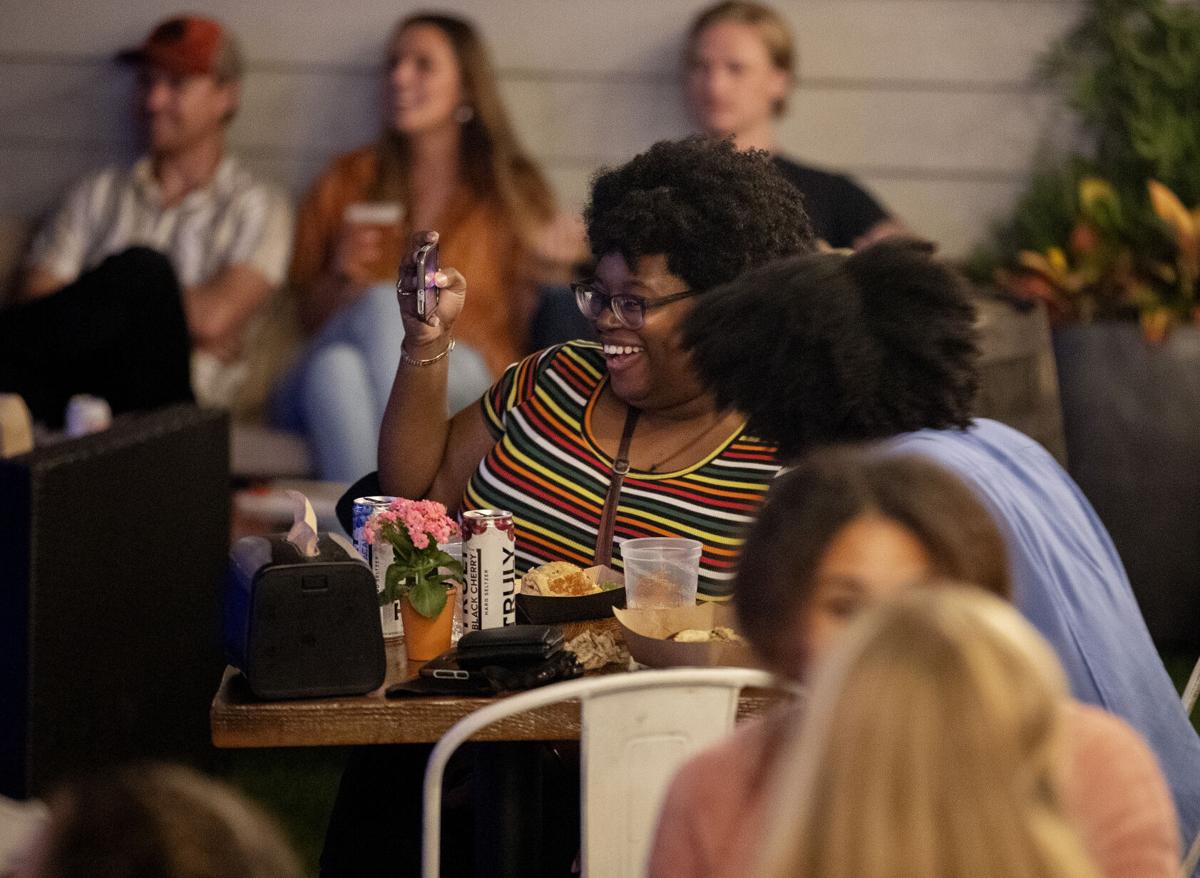 Space heaters are ready to use for cold weather at Tobin’s Market Monday, Nov. 9, 2020 in Charleston. Grace Beahm Alford/Staff

Coats and blankets will soon be new accessories during an evening out for those still looking to remain outdoors while enjoying their pandemic-era entertainment.

As winter approaches and temperatures drop, some outdoor concerts are planning on coming to a close until next spring — like The Windjammer's sunset stage shows, Firefly Distillery's "Safe Sounds" series and Charleston Music Hall's "Around the Bend" series — while others are pushing on through the elements, seeing no other feasible means of operating.

Mushroom propane heaters are already on deck at many that plan to keep their outdoor concert operations running through the cold.

Are concerts back? A status update on 16 Charleston music venues

Among venues planning on keeping the outdoor concerts coming this winter is the Charleston Pour House, which has been hosting shows on its spacious deck since May. The venue typically packs hundreds of showgoers into its indoor standing-room space that faces a full-sized, raised stage.

During the coronavirus, the outdoor bar, deck and secondary stage have transformed from the side attraction to the main draw.

Owner Alex Harris said there are no current plans to open the inside stage, and that's mostly because of the 11 p.m. curfew that remains in effect for restaurants and bars.

The Pour House has been offering back-to-back outdoor shows featuring the same band to maximize revenue. There's an early show around happy hour and then a late-night show that wraps up before last call at 10:30 p.m. Tickets are sold by the table, each of around 30 holding four to eight patrons.

Drive-in movie theaters that have emerged in Charleston during the coronavirus are planning on staying open during the winter, with options to keep the car's heat running or to pile up blankets for a cozy snuggle in the back hatch.

"For us, it doesn't make any sense to open the inside," said Harris. "We would have to change up our whole ticketing map, and it wouldn't end up being additional revenue for us right now because we're already doing outside shows as late as we can."

Though many outdoor shows have sold out, it's not quite the same as what a sell out was before the pandemic, "by any means," said Harris. The venue has only been operating at 25 percent capacity, and while the setup has allowed the Pour House to remain open, Harris is ready to make a profit once more instead of barely breaking even.

The venue was one of many around the country to petition for the Save Our Stages Act in Congress, which would give financial relief to struggling independently owned music venues during the pandemic. That bill hasn't passed.

"Yeah, it’s going to be cold, but we're going to crank out the heaters and people can crank out their coats for the two months you actually wear coats here, and we'll all get by," said Harris.

Tobin's Market, a new music venue that opened during the pandemic in downtown Charleston, will also be bringing out the propane heaters for its guests this winter.

The space, which operates in a courtyard and features tables and couches for lounging and a stage under a pagoda, hosts live music six nights a week. There's typically a $5 cover, which goes straight to the bands, and the "gourmet on a paper plate" menu includes charcuterie boards and street tacos.

"Almost our entire restaurant, venue and bar is outside," said general manager and operating partner Pete Bohm. "The indoor space is just a small bar and the bathrooms. The magic is in the courtyard."

Tobin's was opened as an outdoor listening room with local musicians in mind. Several members of staff are actually musicians themselves, including the chef, Danny May, who was a rotating member of wedding and event music collective The Emerald Empire.

One day a week, he and staff play a "family jam" at Tobin's. The rest of the week, talent booker Paul Joliet of tomatoband sets up the acts who will be taking the stage.

Mushroom heaters are already lined up and on the ready for chilly nights, and there are plans to sell blankets with the venue's logo stitched on as well as offer warmer drinks, like hot chocolate and mulled wine.

"The show must go on, cold weather or not," said Bohm.