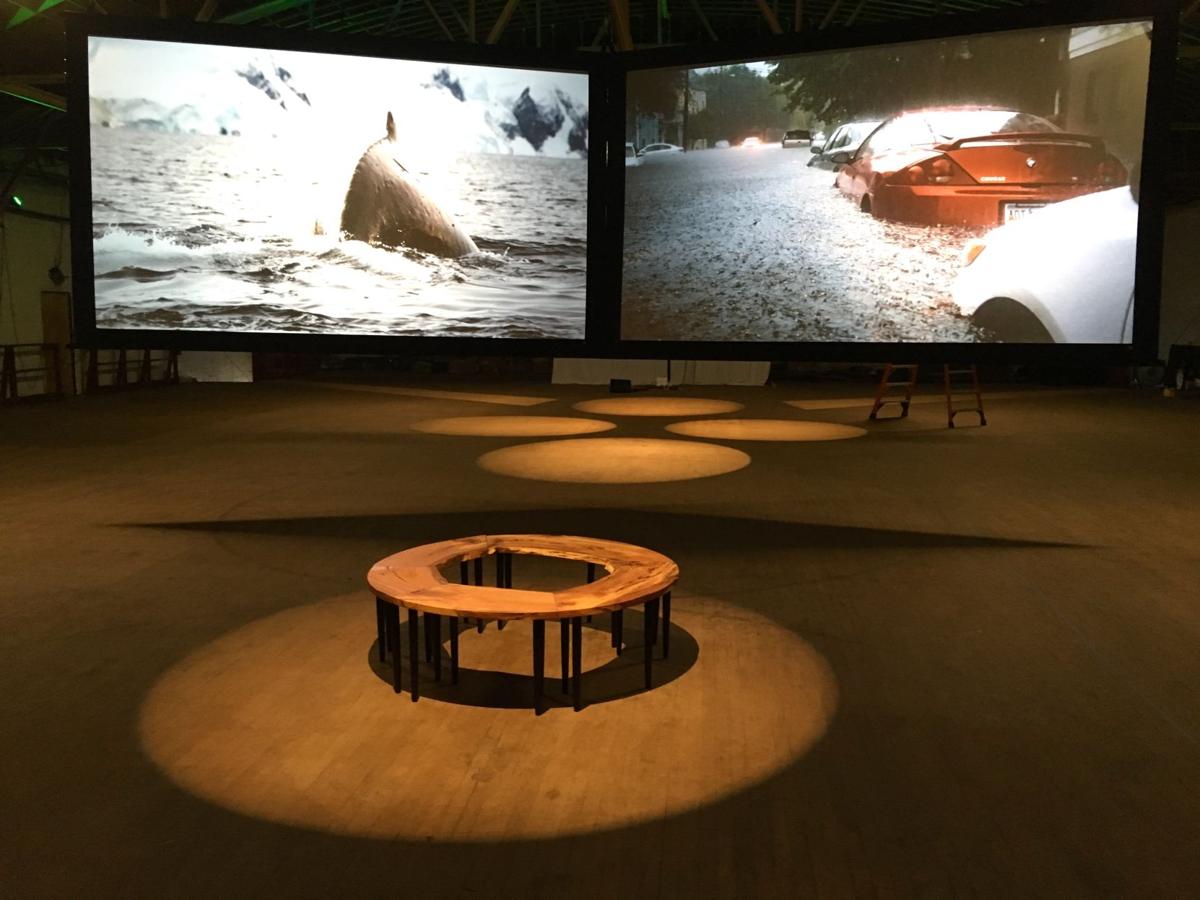 A portion of John Duckworth's "Wade in the Water" multimedia installation. (Adam Parker/Staff) 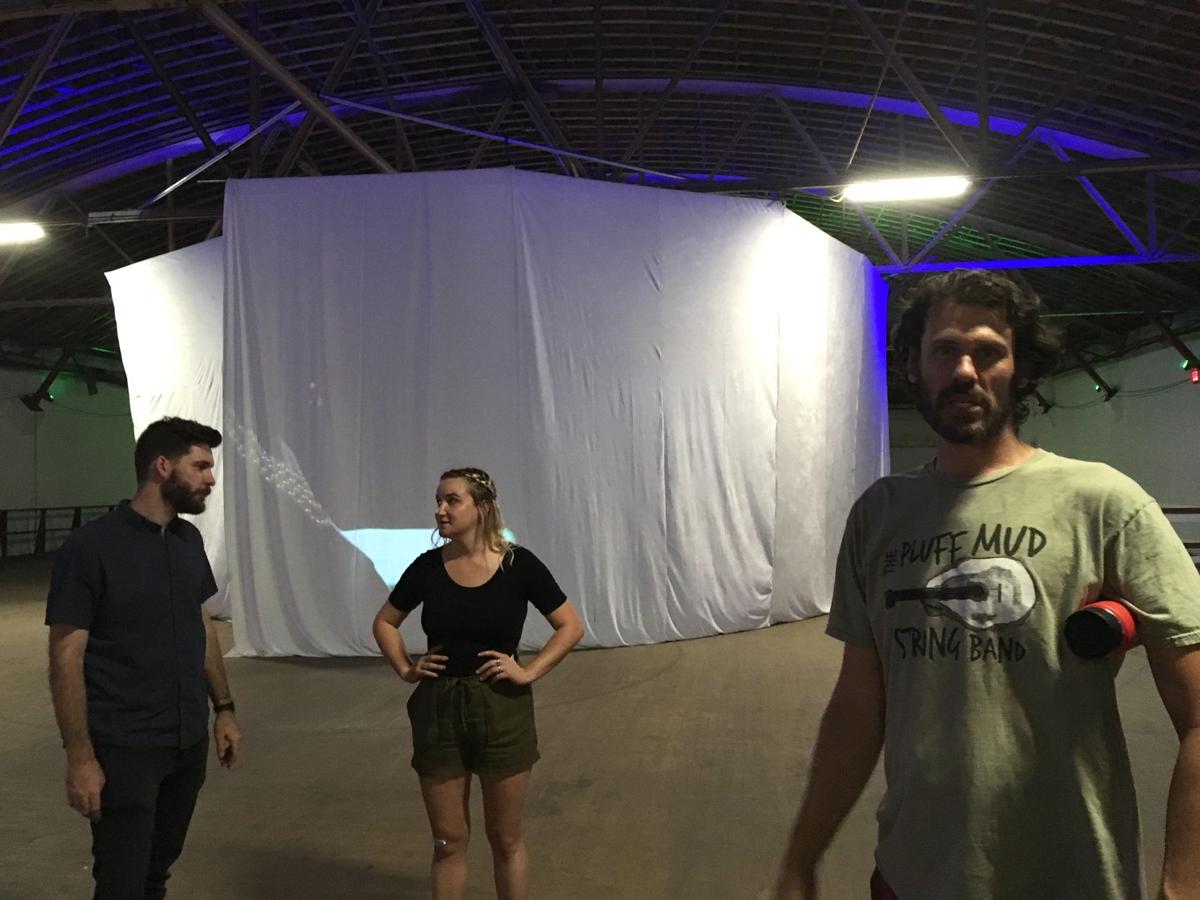 "Wade in the Water," a multimedia art installation, relies on GPS mapping and a custom-made app to deliver dynamic audio to visitors. The installation is the work of John Duckworth (right). (Adam Parker/Staff)

A portion of John Duckworth's "Wade in the Water" multimedia installation. (Adam Parker/Staff)

"Wade in the Water," a multimedia art installation, relies on GPS mapping and a custom-made app to deliver dynamic audio to visitors. The installation is the work of John Duckworth (right). (Adam Parker/Staff)

Artist John Duckworth is an interesting combination of meditative calm and frenetic creativity. A serious yoga practitioner, he has decided “to move in harmony with what is”: to embrace opportunity, to welcome collaboration and to accept what he cannot change.

But that doesn’t mean he isn’t steaming mad about certain things. Like the dangers posed by the city of Charleston to bicyclists. Like consumerism and inertia and a strange resignation in the face of climate change.

That last issue recently has him all riled up, in his smiling Zen sort of way. Last year he had the occasion to meet Robert Swan of the 2041 Foundation. Swan, a polar explorer and environmentalist, told Duckworth about the foundation’s work to raise awareness about sea level rise, and about its trips to the globe’s southernmost continent. Duckworth’s eyes grew large with interest. He helped send a friend, Garrett Budds, to Antarctica.

Budds came back with a lot of beautiful photographs.

Meanwhile, back in Charleston, photographers John Gauldon and Leigh Weber had accumulated a number of photographs of street flooding, mostly as a result of Hurricane Matthew, which rolled up the Southeast coast in October 2016.

Serendipity ensued. Budds and Duckworth sat on the advisory committee for Enough Pie’s “Awakening V: King Tide” project, and Budds said to his pal, “So I’ve got all these photos from Antarctica, John. Maybe we can do something.”

Duckworth thought about it for a second: “Climate change ... action-consequence ... fully interconnected planet ... the Anthropocene period in which human activity has been the dominant influence on the environment ... art ..."

A plan began to take shape in his head. A manifestation of that plan now is installed on the second floor of 1056 King St., above Redux Contemporary Art Center, in a vast open space that once was a roller rink.

The multimedia installation, an offshoot of “Awakening V,” is called “Wade in the Water.” It has three main components: An audio-centric immersive first phase featuring the famous spiritual; a visual experience that pairs photographic images presented on two huge double-sided screens; and another audio immersion section in which a variety of people talk about climate change.

The installation depends on custom-made technology, an app designed by Josh Kopecek of the English company Echoes, that uses GPS coordinates to identify individual iPhones and activate particular audio tracks depending on where one stands in the space. Digital mapping was done by Austin Schulz, lighting and layout by Technical Event Company. As visitors move through the old roller rink, the audio changes.

More specifically, here’s what happens: You enter the building and hear Henry Riggs and Maari Suarsa of Nameless Numberhead in your earbuds as they guide you up the stairs and to the first part of the installation. Then you hear Ann Caldwell and the Magnolia Singers perform the song “Wade in the Water.” Others have already been encouraged to sing along — and Duckworth recorded them. So as you saunter a bit past the spot where Caldwell’s voice is strongest, you begin to hear the ghost-voices of others who once stood where you are now.

You can move around and hear various people singing, at various volumes, depending where you stand. And Duckworth will be nearby, ready to record you singing the tune, should you wish to add your voice to the chorus.

In the center of the room, you pass through a curtain to a space filled with those paired images and with ambient sounds created by local musician Lee Barbour. You have entered the “White Zone.” The images are carefully curated. Duckworth strives to make the connections clear between what happens way down south and what happens on the Charleston Battery.

The Antarctica photo, for example, might show a white iceberg, with ripples in the water around it, while the Charleston photo depicts a white automobile half submerged in floodwater that’s got ripples in it. And the waterline in each image aligns!

The final section has more audio, so keep your earbuds in. This time it’s a variety of people addressing climate change in a variety of ways. Some recite poems, Duckworth said. Others rant or tell stories or describe what happened to them during Hurricane Matthew.

Again, Duckworth is standing by with recording equipment, ready to add new voices. Each voice is audible clearly within a 6-foot radius, he said. The idea is to accumulate more and more so that a couple of steps in any direction changes the particular voice while reinforcing the general narrative.

“It starts to push back the onslaught of other thoughts,” Duckworth said.

The other thing it does is humanize a topic that can be hard to fully appreciate, since climate change is a slow process and the political debate about it so noisy and distracting, he said.

Climate change is merely an impersonal concept, Duckworth said, “until you realize, ‘I am interconnected with every single atom and molecule on the planet.' We must save it. No, we must save us. ‘It’ is us.”

The exhibit runs through June 11.

WHAT: "Wade in the Water," an installation by John Duckworth