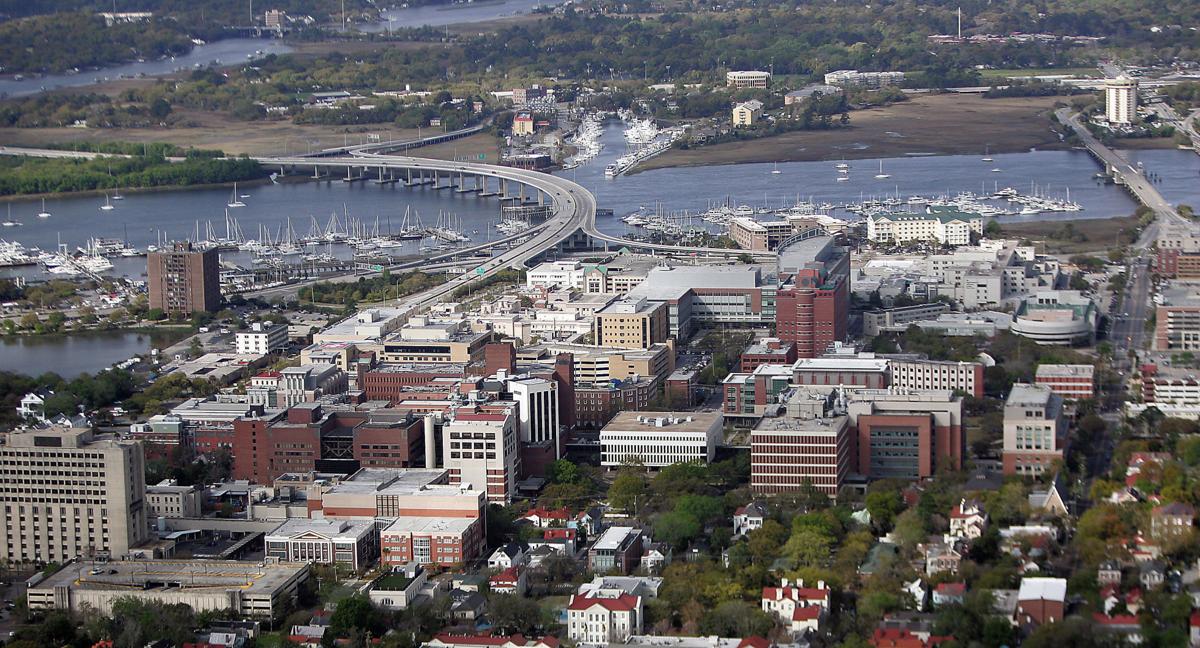 An aerial view of the medical district on the Charleston peninsula. Leroy Burnell/Staff

An aerial view of the medical district on the Charleston peninsula. Calhoun Street is in the foreground. Courtenay Drive, which runs north of Calhoun between two of the tallest buildings, is one of two streets scheduled for a major transformation. Leroy Burnell/Staff 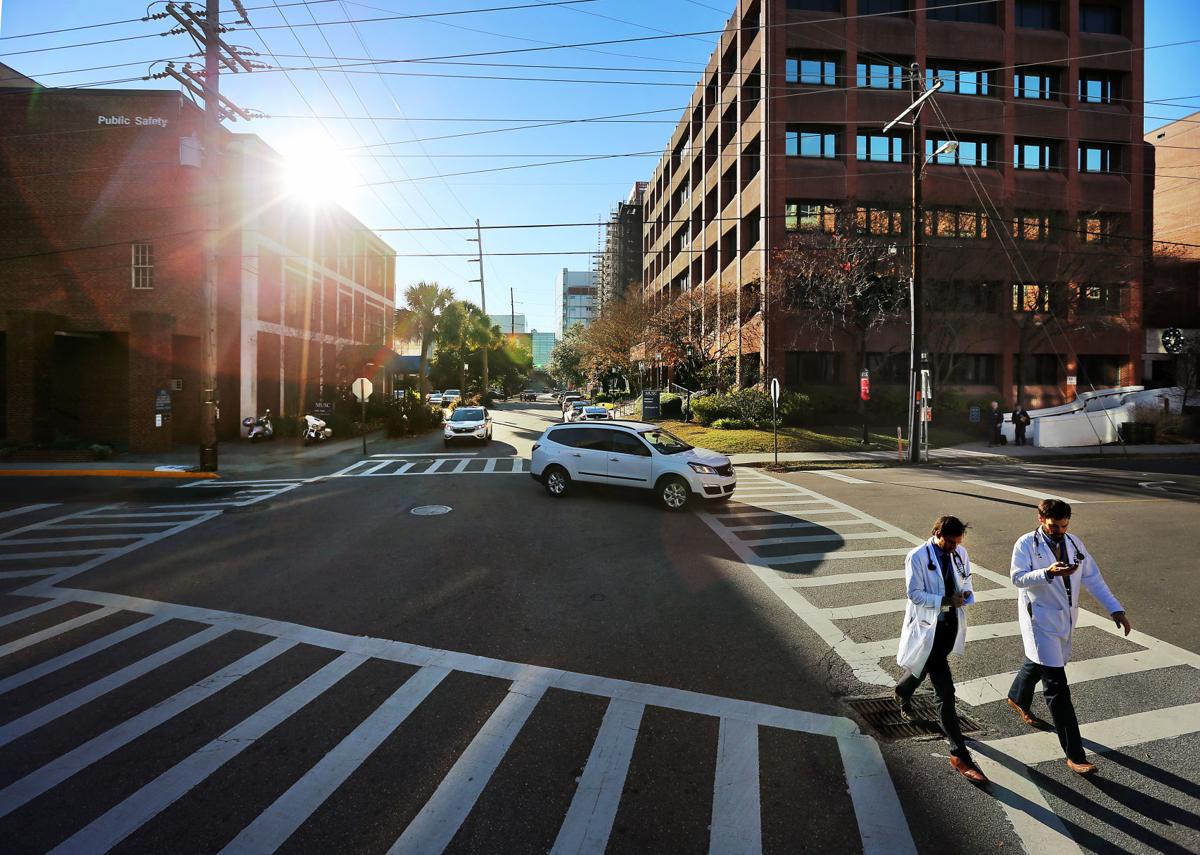 Charleston's medical district has grown in fits and starts during the past century, with relatively little spent on making it an attractive, pedestrian-friendly neighborhood. But its three medical institutions recently started working together to change that, beginning with Doughty Street (above). Dec. 9, 2016. Wade Spees/Staff

An aerial view of the medical district on the Charleston peninsula. Leroy Burnell/Staff

An aerial view of the medical district on the Charleston peninsula. Calhoun Street is in the foreground. Courtenay Drive, which runs north of Calhoun between two of the tallest buildings, is one of two streets scheduled for a major transformation. Leroy Burnell/Staff

Charleston's medical district has grown in fits and starts during the past century, with relatively little spent on making it an attractive, pedestrian-friendly neighborhood. But its three medical institutions recently started working together to change that, beginning with Doughty Street (above). Dec. 9, 2016. Wade Spees/Staff

What many consider downtown Charleston’s most depressing neighborhood is, ironically, the place where many people go to get well.

Now, the city and its three medical institutions between Cannon and Calhoun streets are trying to cure a set of streets many consider unwelcoming — streets that weave through a mostly bleak mix of towering hospitals, office buildings, garages and surface parking lots.

And they have hired a landscape architecture firm nationally known for designing the 9/11 Memorial in New York, a pair of deep pools where the Twin Towers once stood, framed by stones that bear the victims’ names.

The effort began years ago, when the Medical University of South Carolina reached out to the Clemson Architecture Center-Charleston to study how to make the area into an arboretum district. It picked up more steam when Roper Hospital contacted MUSC about replacing the parking spaces it would eventually lose because of the construction of MUSC's new children's hospital.

And it gradually blossomed into an ambitious plan to rework the infrastructure and upgrade the district’s streets, creating a largely pedestrian greenway where Doughty Street stands today and make Courtenay Drive a street more appealing to pedestrians and cyclists, as well as buses, cars and ambulances — and possibly much more.

In short, the institutions are hoping to improve their corner of the peninsula so that it's a place that helps people feel better, even a place that people would like to visit when they're feeling fine.

Why the hospitals are where they are

Charleston’s hospital district — roughly between Rutledge Avenue, Calhoun Street, Lockwood Boulevard and Cannon Street — has been one of the most dramatically evolving parts of a historic city that has prided itself more on preserving the old rather than embracing the new.

The district took root at its current location soon after the 1886 earthquake, which heavily damaged Roper Hospital on Queen Street. That street was where the city’s first hospitals were built in the late 18th and early 19th centuries, but the district gradually shifted north. A former marine hospital on Franklin Street is all that survives from that era.

With donations following the earthquake, the city built a new hospital at the corner of Calhoun and Jonathan Lucas streets by 1888. Roper tore down part of that building in 1904 and opened a larger hospital there two years later. St. Francis — which would become a hospital that later would merge with Roper — opened its building on Calhoun Street in 1882.

Susan Hoffius, curator of the Waring Historical Library on MUSC’s campus, said the Medical College, as MUSC was known then, moved from Queen Street to its own new building across Jonathan Lucas Street in 1914. The facade of that first building still survives as part of the Hollings Cancer Center.

Big changes came in the late 1940s, when MUSC acquired two blocks between Ashley Avenue and Lucas Street with about 52 private homes — a move that eventually would lead to the closing of the eastern end of Doughty Street and the first new buildings around what's now its horseshoe. Another came in 1963, when it bought 11 acres from the Porter Military Academy, which then moved across the Ashley River, merged with other schools and became Porter-Gaud.

Other hospitals such as McLennan Banks and Charleston Memorial also came and went in the area during the 20th century, with MUSC often absorbing their property into its growing campus.

The Charleston VA Medical Center opened in 1966 and was renamed in honor of the late Ralph H. Johnson, a Charleston native and Vietnam war hero, in 1991.

Like others across the country, Charleston's hospital district grew in regular spurts as money became available and medical technology treatments evolved.

When someone kidded former MUSC President Jim Edwards of wanting all the peninsula’s land, he joked back that he did not — that he only wanted properties that bordered on MUSC’s property.

An afterthought becomes a priority

As it evolved, the public realm of the hospital district — its streets, sidewalks and other public spaces — most always appeared to be an afterthought.

Meanwhile, the district was booming. Its three institutions currently employ 20,000 workers and keep humming 24 hours a day all year round.

"That is the highest concentration of employment in the entire Charleston region," city planner Christopher Morgan said, larger than Boeing and other major industries.

Another 10,000 arrive here each day either to attend class, visit or seek treatment. MUSC's Public Safety Office estimates that 7.8 million go to the campus each year — more than Charleston's annual tourism visitation.

About six years ago, students at the Clemson Architecture Center - Charleston worked with MUSC on studies for its future buildings, and Dr. Jerry Reves, then dean of the medical college, asked Clemson to look into whether MUSC’s campus could be changed into a sort of arboretum.

“We did do that, but we also looked at the public realm,” center director Ray Huff said. “The investments have been made in everything but that.”

Their plan came up with a strategy for connecting the school’s iconic horseshoe with its new Ashley River Tower at the other end of Doughty Street.

Not long afterward, Roper planned to build a new parking garage on Doughty Street because it would be losing spaces at the western garage near MUSC’s new Children’s Hospital. That started a conversation about whether a new garage was really what the district needed there – or whether there might be a better way.

That led to regular meetings between those institutions, as well as the Ralph H. Johnson Medical Center. Huff was hired as a facilitator, and city planners sat in. Huff also brought in DesignWorks and SeamonWhitesides Urban Edge Studio to move along the discussion.

A memorandum of understanding for the hospital district got the city's approval at Mayor Joe Riley’s final City Council meeting last year.

PWP Landscape Architecture, the Berkeley, Calif., firm that designed the 9/11 Memorial, is beginning work on a plan to convert Doughty Street into a greenway and to make similar improvements to Courtenay Drive, between Calhoun and Cannon streets.

Ken Hill, construction manager for Roper St. Francis, said the hope is the work will create a healing environment, as well as make the area easier to get to for patients.

“It’s a hazardous area to walk,” he said.

Todd Mead, a partner with PWP, said the firm's main challenges will be how to deal with heavy traffic, including ambulances, buses and service vehicles, as well as with flooding and a rising sea.

"All that is background complexity we need to address.”

His colleague Martin Poirier said ambulance sirens can be piercing to pedestrian's ears, but the redesign shouldn't do anything to slow their response times.

“We thrive on constraints," he said. "The more you know what you can’t do, the more you can solve the problem.”

And landscape architect Scott Parker of DesignWorks said many people currently believe it's difficult to drive around the medical district. A successful project could change that perception.

“Some people are apprehensive. Some doctors were apprehensive. They say it’s so difficult for some of my patients to get here now. You guys are only going to make it worse," he said.

But one key will be the construction of a new garage near Courtenay and Cannon streets that can handle staff parking.

PWP hopes to complete its design work next year, so construction could begin in 2018 and improvements to Courtenay and Doughty could be finished around the same time as MUSC's new children’s hospital, which is set to open in 2019.

Down the road, the project’s most striking potential could be extending Courtenay south, across Calhoun, to lead into a new waterfront park along the northern edge of Long Lake, the city’s former marina. Another element would extend Hagood Avenue south across Cannon Street. City Council recently approved a zoning plan that would do that and create a much better pedestrian link between the hospital district and the emerging West Edge development to the north.

“There’s no reason for there to be a disconnect," Huff said. "It’s a place of healing and recovery, and even if one is doing well, we imagine in the evening one might bring their family from Hampton Park Terrace or Harleston Village to enjoy this beautiful public space.”