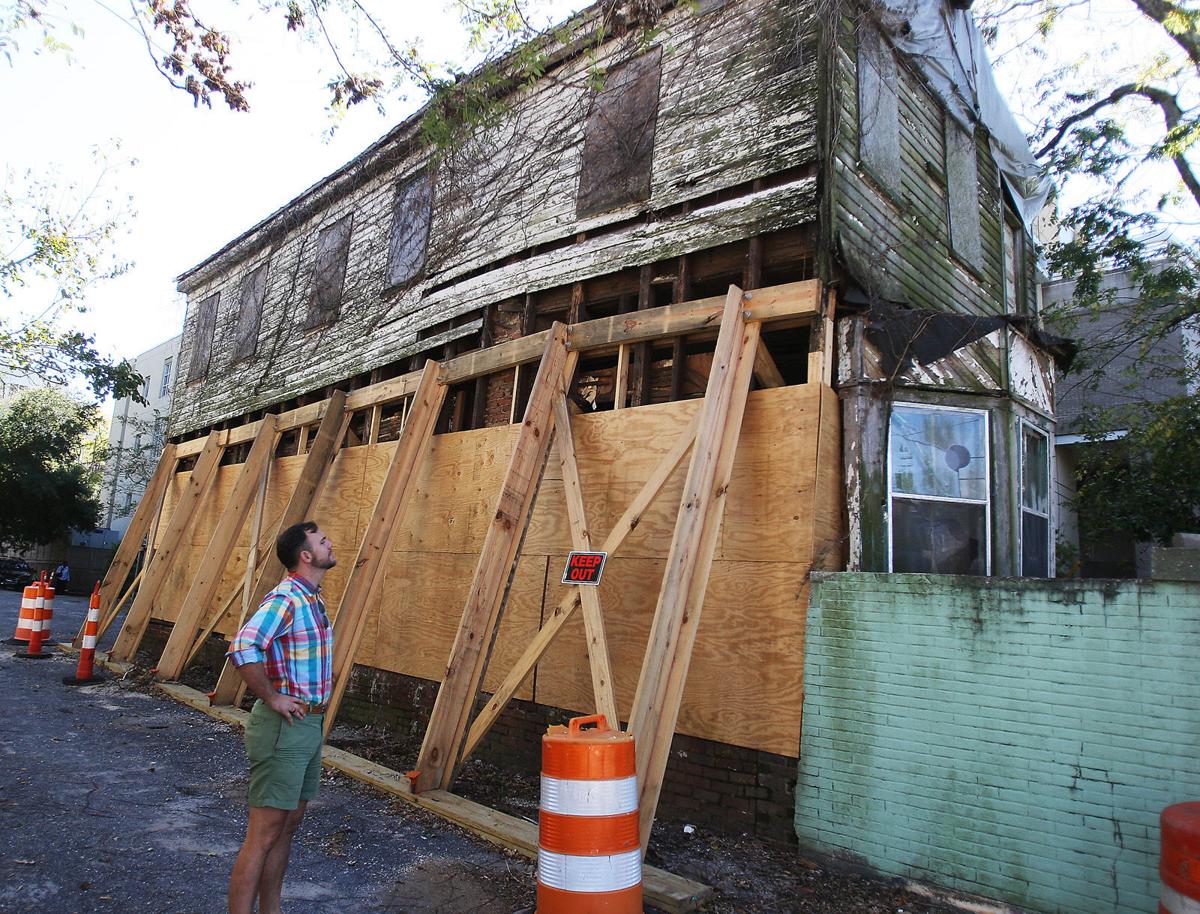 Cator Sparks, vice president of the Cannonborough-Elliotborough Neighborhood Association, doesn't want 133 1/2 Cannon St. to be demolished and hopes the owner will restore it. 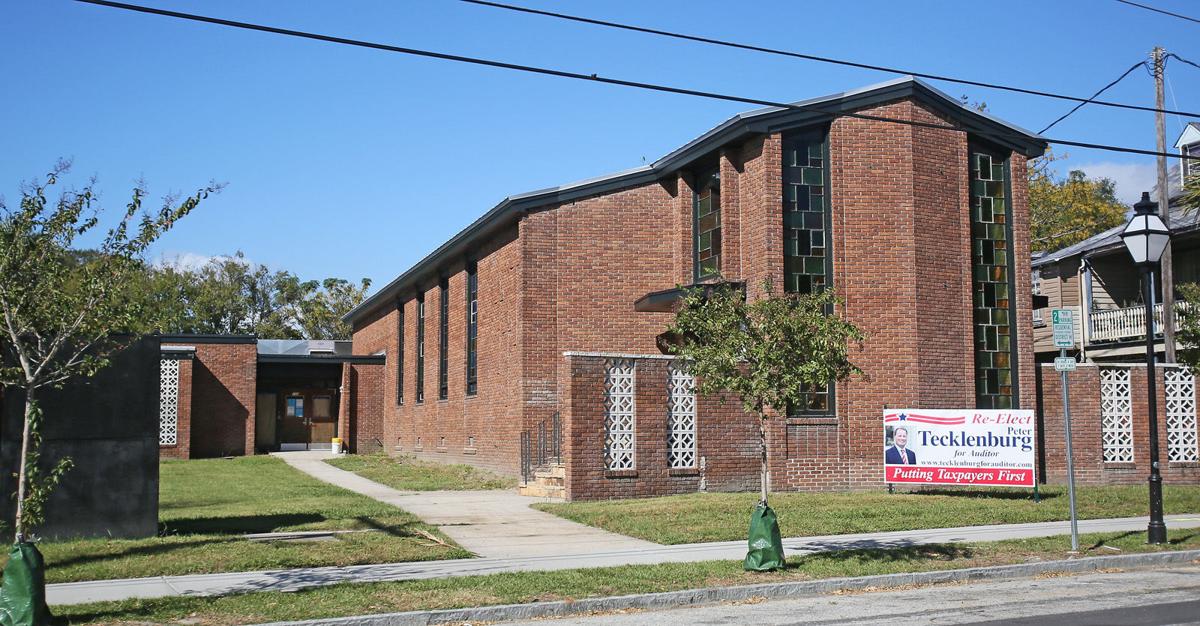 Mt. Olivet Church has been converted into the Cannon Street Arts Center. Pure Theatre takes up residence there beginning this fall.

Cator Sparks, vice president of the Cannonborough-Elliotborough Neighborhood Association, doesn't want 133 1/2 Cannon St. to be demolished and hopes the owner will restore it.

Mt. Olivet Church has been converted into the Cannon Street Arts Center. Pure Theatre takes up residence there beginning this fall.

Patterson Smith said he has no plans to sell or fix up a dilapidated house he owns on Cannon Street after his vision to turn the property into a park was nixed by the Board of Architectural Review this month.

The sinking, termite-eaten house with boarded up windows is now held up by wooden beams to keep it from falling down. Soon, Smith said he will wrap a chain-link fence around it and simply walk away.

“I just don’t have the vision for the property. I don’t know what to do with it,” the Charleston real estate investor said. “I have rights as an owner. And one of my rights is to do nothing.”

It's the same right that different owners of 133½ Cannon St. have exercised during the past decade. Separate owners asked the city for permission to tear down the house in 2004 and 2009. Each time, city planning staff has recommended demolition, but the board disagreed, despite inspectors’ reports saying the building was structurally unsound and costly to salvage.

For at least the third time, 133½ Cannon faces another indefinite period of neglect. The city can require Smith to keep it standing, but that’s as far as its authority goes.

It's just the latest example in the city's long-running debate over historic buildings being demolished by neglect. It's also a common worst-case scenario of what can happen when the board denies demolition, one that neighborhoods have dealt with for about as long as the board has existed, according to city planner Jacob Lindsey.

“Often, those are not clear-cut or easy decisions. And they do, from time to time, put us in a place where property owners are left with structures that they don’t want to keep,” he said. “That is the classic conflict that the BAR finds itself in.”

Opposite sides of the street

The board sided with preservation groups and members of the Cannonborough-Elliotborough Neighborhood Association, who explained at the meeting on Oct. 12 that they didn’t want to see the century-old home demolished for the sake of a small park that would be surrounded by a parking lot and two driveways.

Cator Sparks, vice president of the association, said the neighborhood has plenty of these old, fixer-uppers – they’re part of its character.

“This is what half the neighborhood used to look like 10 years ago,” he said.

He’d rather see the house the way it is than see it not standing at all. Still, he doesn’t understand why Smith, a seasoned downtown developer, wouldn’t want to invest in the house and turn it into something useful – or at least sell it to someone else who would.

“We are not in some no-man’s land where we wouldn’t need an apartment or an office building,” he said. “I mean, Cannonborough-Elliotborough is one of the most diverse, growing neighborhoods on the peninsula.”

The property is between the Center for Women and a large Medical University office and women’s health facility. Right now, MUSC employees and patients use the parking lot behind the house, and emergency vehicles use its driveway as an exit from the small garage next door.

Smith bought the church's property last year for $2 million, around the same time that he acquired 133½ Cannon St. for $350,000. He said he had a vision in mind that he thought would be attractive from the neighborhood’s perspective.

He plans to use the church building as a community arts facility, which could be leased to the city and operated by a local arts group. Those details are still being worked out, according to city spokesman Jack O’Toole.

As for the house, Smith thought the best solution was to tear it down and transform the lot into a small “pocket park” that could be leased to MUSC, and utilized by the arts center from time to time.

“I did have the vision that (the two properties) would be complementary, through a common style of landscaping and those sorts of things,” he said. “My mistake was, I thought it was so obvious that anyone would agree with me. Frankly, when I asked anybody they all agreed with me, except for the neighborhood association. They somehow think this house is sacrosanct.”

The house has the lowest ranking on the city’s scale of historically significant properties. A structure on the rear of the property was torn down in 1994, and the upper porch of the house was removed in 2007 because it was at risk of caving in, according to property records.

While city staff recommended demolition each time it was requested, Lindsey defended the board’s latest decision.

“The BAR was largely formed to prevent demolition of buildings in the historic district. The board, in many ways, is doing the job it was created to do,” he said. “If you are walking or driving eastbound on Cannon, that is the first historic property you see on the street. I think the board felt the site had some importance in terms of setting the scale of the neighborhood but also that future plans didn’t warrant a demolition."

Smith simply disagrees that the house is worth the effort to save it. For now, the property will continue to serve its purpose as a driveway and parking area for MUSC, in exchange for access to MUSC’s parking lot across the street when the arts center opens.

Meanwhile, the neighborhood surrounding the house will continue to evolve as more old houses like 133½ Cannon are restored. The city is working to convert Cannon Street into a two-way street to encourage more foot traffic, which is likely to spur more small business activity.

Smith said when that happens, he might consider selling the house.