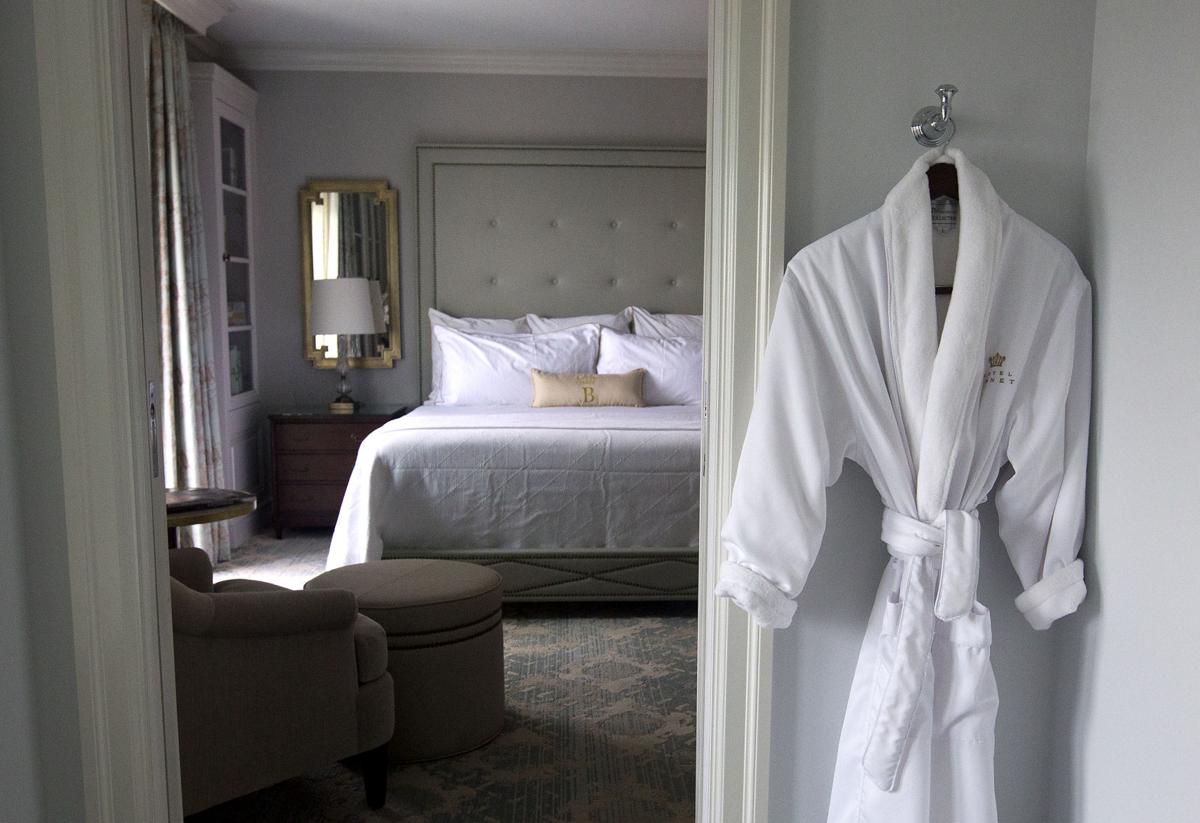 Visitors to Charleston spent an average of $863 per trip last year, according to data from the College of Charleston's Office of Tourism Analysis. File/Grace Beahm Alford/Staff 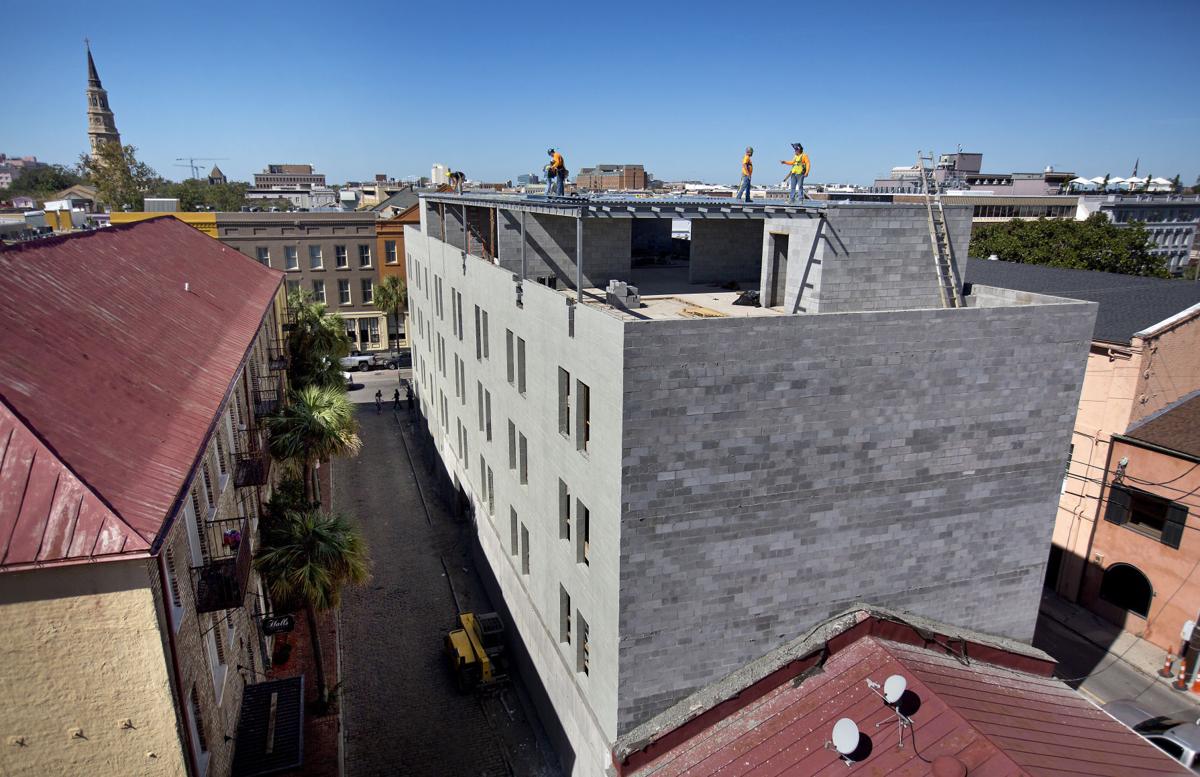 New hotels such as The Saint being built on East Bay and Cumberland streets in Charleston follow the trend of high-end, boutique lodging in Charleston. File/Grace Beahm Alford/Staff 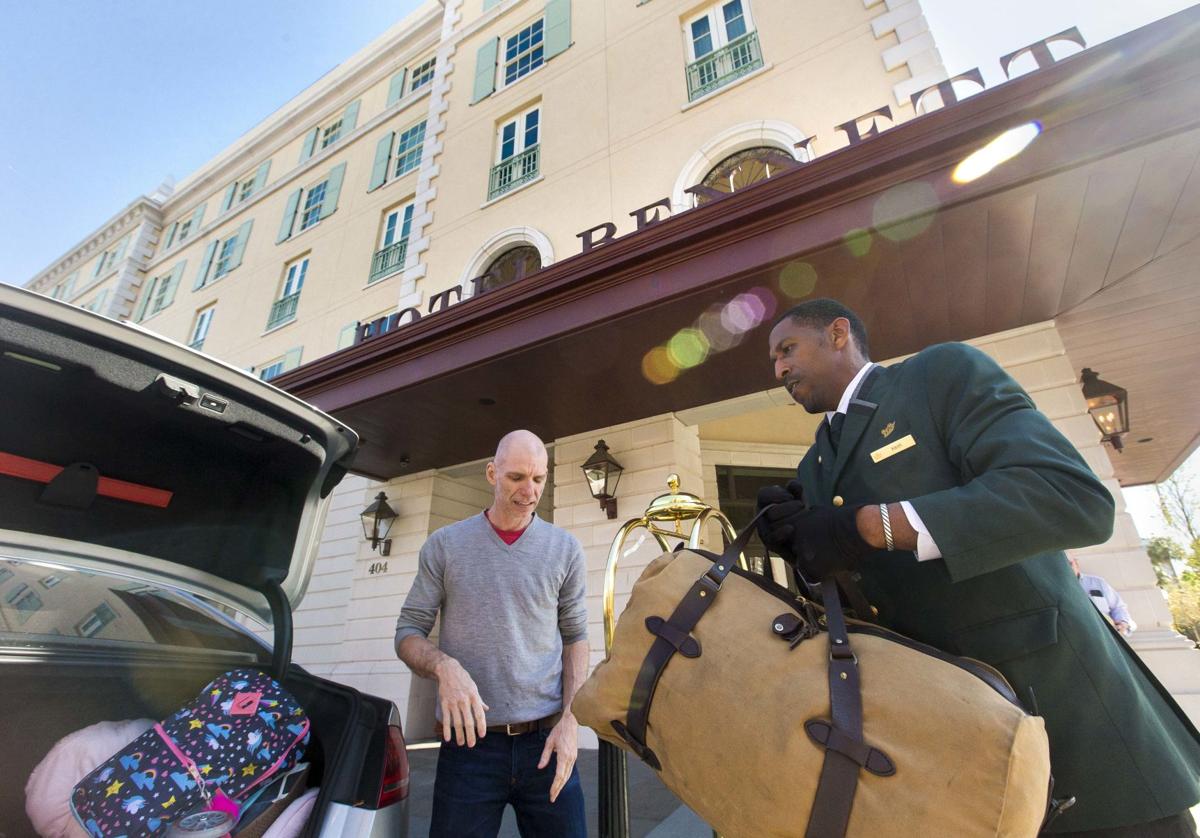 At one Charleston hotel, free-flowing champagne can be summoned at the press of a button.

Another offers a private helicopter ride and a musician — a violinist or guitarist, whichever suits the ear — as part of a $6,000 "Royal Engagement Package."

At the peninsula's newest lodging, Hotel Bennett, a presidential suite that boasts a wraparound terrace with views of the Ravenel Bridge starts at $1,799 a night.

Most lodgings offer some kind of romantic getaway package, including one that provides a private carriage ride, rose petal turndown service and a room stocked with chocolate-covered strawberries.

Downtown Charleston is firmly in the high-end vacation market, and that's been intentional.

"Charleston is not a budget destination," said Helen Hill, the CEO of Explore Charleston, the destination marketing organization that promotes Charleston to visitors.

That reputation has guided the hotel development on the Charleston peninsula and allowed the area to absorb hundreds of new hotel rooms in recent years without seeing a change in rates. And as more residents call for fewer — or at least no more — tourists, appealing to affluent guests may be a key component of growing impact without increasing visitor volume. 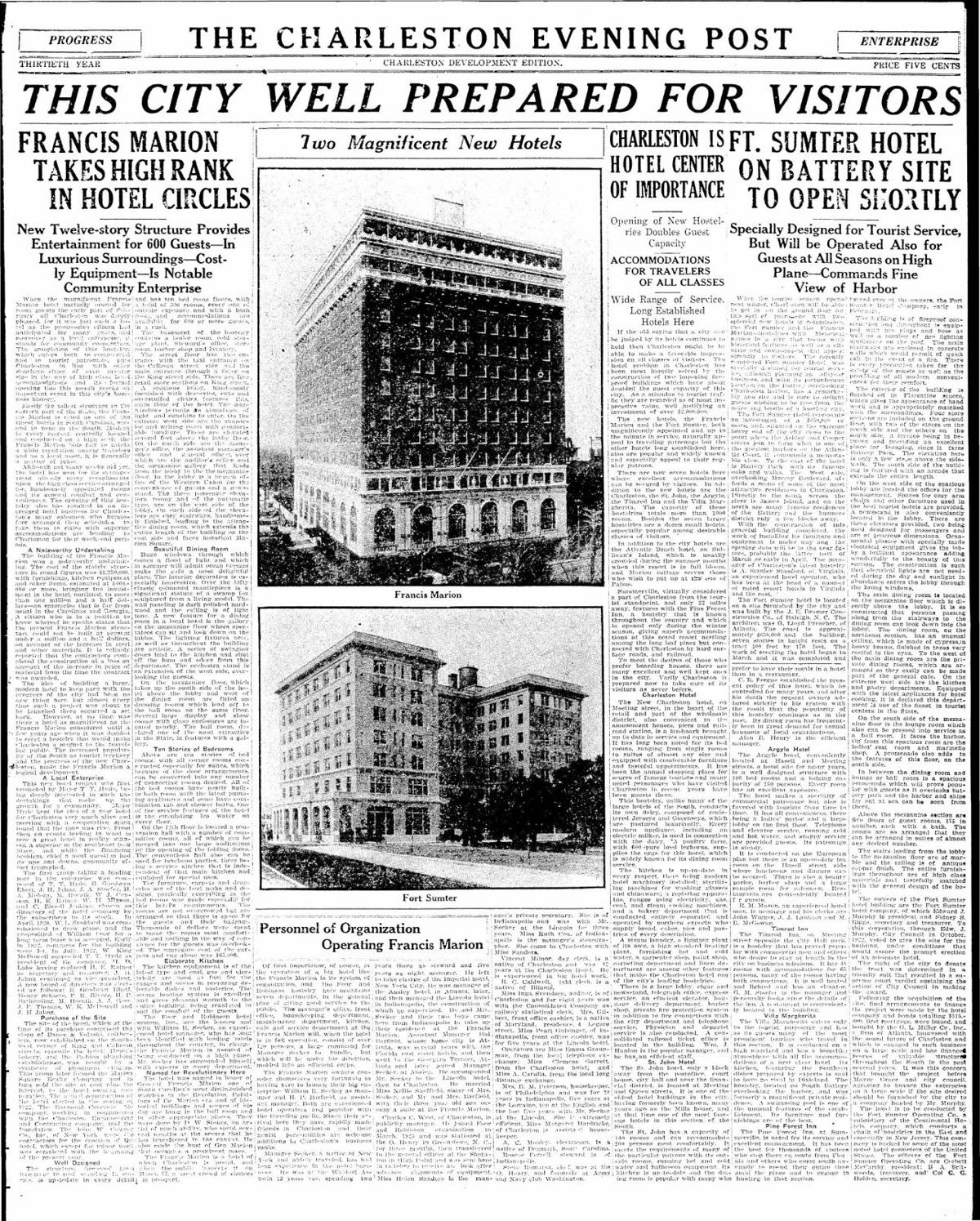 One of the headlines declared Charleston a "hotel center of importance." The two properties doubled the city's guest-room capacity and brought the hotel total up to seven. The "problem" referenced in the lead story had been the previous lack of rooms and luxury offerings.

Now, nearly a century later, any mention of a "hotel problem" in Charleston is decidedly different. This fall, a new ordinance was passed by City Council that sought to slow hotel development and protect other real estate uses downtown.

Though the peninsula has multiple large chain hotels, the most recent, current and planned hotel developments fall almost exclusively in the luxury and lifestyle categories. In the last year, several chain hotels have opened in Charleston County, but none of them were on the peninsula.

In January, Charleston developer Michael Bennett, who owns Hilton and Marriott-affiliated properties around the Charleston area — including an Embassy Suites that's being built now on the Mount Pleasant waterfront — opened his independently-branded luxury Hotel Bennett on Marion Square.

Before that, on Calhoun Street, the 50-room Hotel Bella Grace opened. Although it was affiliated with Marriott, it operated in the lifestyle category, meaning it had its own unique name, style and marketing.

On East Bay Street, the Saint Hotel, the third hotel for a boutique brand that started in New Orleans, is rising. And on King Street, at least two former retail stores are being converted into high-end niche lodgings.

The rise of the boutique and lifestyle genre in Charleston is due, in part, to the rules of Charleston's hotel zone, which limits many areas to no more than 50 rooms. But older properties built before the cap are leaning toward lifestyle concepts, too.

One of downtown's longest-standing chain hotels, the DoubleTree Charleston Hotel near the City Market, announced earlier this year that it would rebrand as an independently flagged lifestyle property. Its manager said the pivot was tied to a desire to make the property more unique to Charleston.

The upscale offerings at downtown lodgings — which range from a carriage ride or plantation tour to The Spectator Hotel's extravagant "Grand Life Package" — is a sign of a "sophisticated market," said Michael Tall, the former president of Charlestowne Hotels and current chair at Explore Charleston.

Other markets, he said, are more driven by price. In Charleston, as more rooms have been absorbed by the market, hotels have been encouraged to "increase their value" with add-ons and amenities rather than slash prices.

"We don't want a race to the bottom," Tall said. "Other markets have experienced that."

One example of that, Hill said, is offering two nights at a regular rate with at third night free. That encourages longer stays — which means more spending at attractions, stores and restaurants — and maintains the "perceived value" of the room.

The average rate paid per night for Charleston-area hotel rooms has been relatively steady over the last several years, said Daniel Guttentag, the director of the Office of Tourism Analysis at the College of Charleston. The most recent spikes were in 2015 and 2016, when the average daily price went up by $8 and $5, respectively.

The current rate is around $150 for the Charleston region, compared to about $130 in the Southeast and $132 nationwide.

That figure applies to the entire Charleston region, meaning suites on the peninsula are factored in along with rooms at more moderate hotels in North Charleston or West Ashley. The daily rate for hotels on the peninsula is about $90 higher than the average for the rest of the region.

Accommodations typically make up the largest portion of a visitor's total trip spending, according to data from the College of Charleston. Those figures also show that spending per person per trip in Charleston is on the rise.

Growing the city's "fly market" has been a significant factor in that spending increase, Guttentag said. Tourists who travel to the area by airplane tend to stay longer and spend more.

That's particularly true when it comes to overseas visitors, which Charleston made inroads with this year with the addition of seasonal nonstop air service between Charleston International and London's Heathrow Airport. According to the most recent market profile from the U.S. Travel Association, British tourists spend an average of $3,421 per visit and stay about nine days.

The College of Charleston also found that tourists who stay longer are much more likely to visit the area's museums and historic sites. Only about 11 percent of visitors who spend one night visit a museum, but that portion jumps to about 30 percent for visitors who stay three or four nights.

'Not a volume strategy'

As the overall visitor count in Charleston increases and, with it, concern over too much congestion or strain on the city center from tourists, the amount spent per tourist becomes an important figure.

"If we’re trying to lighten the impact and not necessarily lessen the economic benefit, you need to appeal to fewer people who spend more money," said Kristopher King, the president of the Preservation Society.

The society, which has strongly advocated for stronger tourism management and less promotion, adopted that strategy for its own "Fall Tours," which give ticket holders access to historic downtown homes.

Over the last several years, King said, the organization has tried to scale back the event's footprint while sustaining, and even increasing, revenue. That meant fewer tours overall, fewer tickets sold and a higher price point.

"We were able to actually consciously sell fewer tickets and grow the revenue," King said.

Is Charleston burdened by too much tourism? 'We're not there yet,' but need a path forward.

Charleston "does not employ a volume strategy" when it comes to its overall marketing tactics, said Tall of Explore Charleston. The city specifically seeks out travelers who are educated and affluent.

He pointed to economic impact and visitor volume data from Myrtle Beach, which is South Carolina's top-earning destination.

Last year, Horry County brought in $21 million in tourism-related tax dollars, compared to Charleston County's $19 million. But along with a $2 million lead, the Myrtle Beach area had 12.6 million more visitors than Charleston.

Still, visitor numbers in Charleston are growing along with the spend per visitor. Though the 2019 visitor numbers won't be determined until next year, hotel data may indicate another increase in overall visitation. The number of room nights sold in Charleston-area hotels is the starting point for that figure, so more nights sold typically means more tourists.

So far this year, room nights sold have been up by about 3 percent.