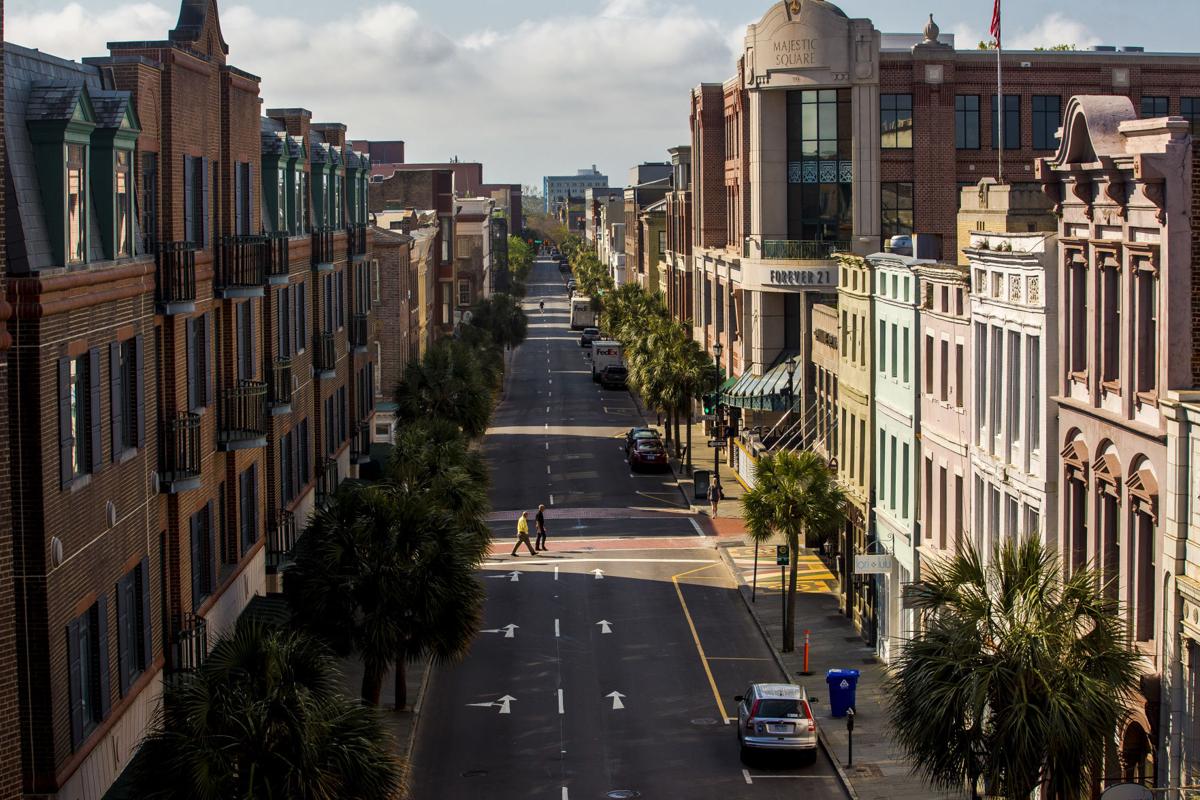 Lower King Street's retail shops normally bustle with activity in early spring. A view from Belmond Charleston Place in March showed a starkly different scene after COVID-19 outbreak restrictions were announced. The city's retail district has yet to recover from the health crisis and the May riots. File/Andrew J. Whitaker/Staff 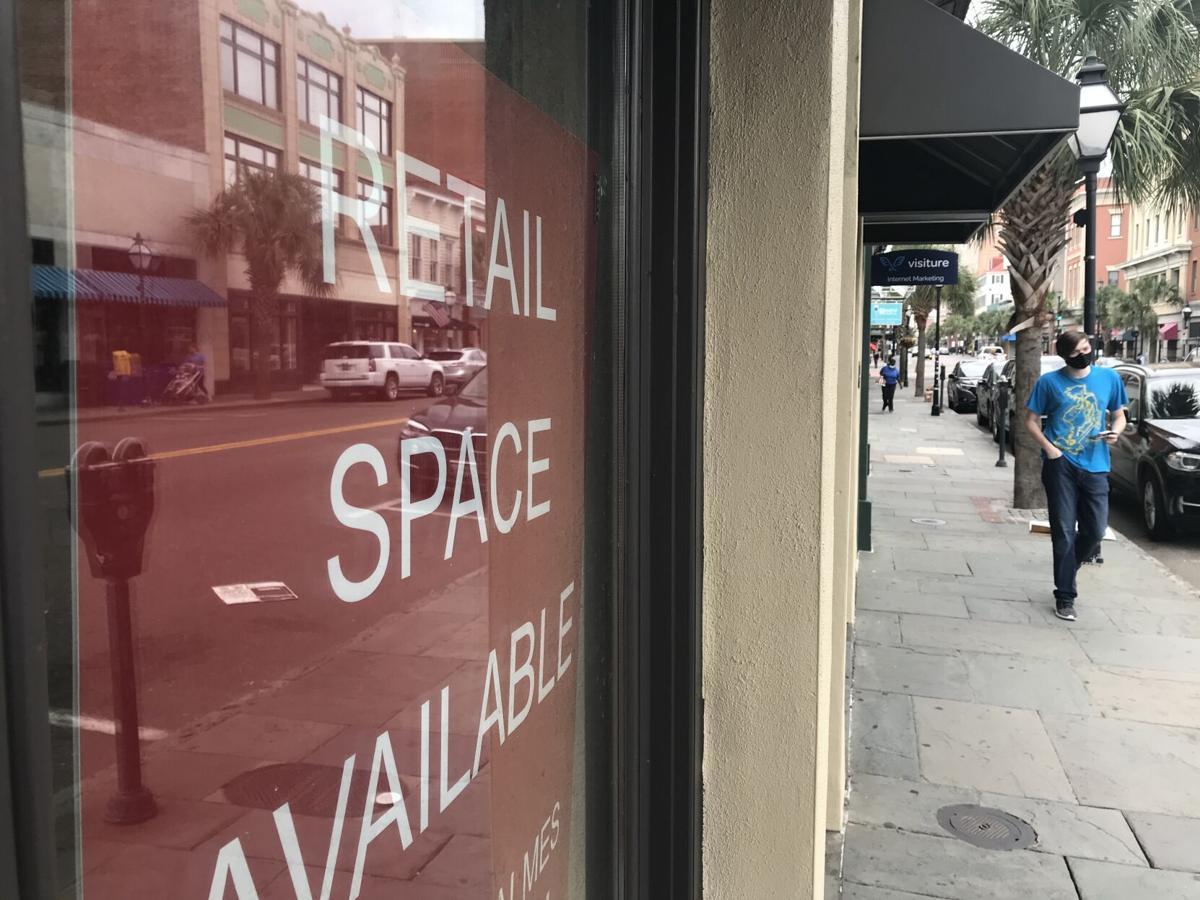 A sign in the window of a business on King Street in downtown Charleston shows a space available for retail. It's not the only one that can be seen along a shopping district affected by twin maladies of the coronavirus pandemic and fallout from the late May riot. Warren L. Wise/Staff 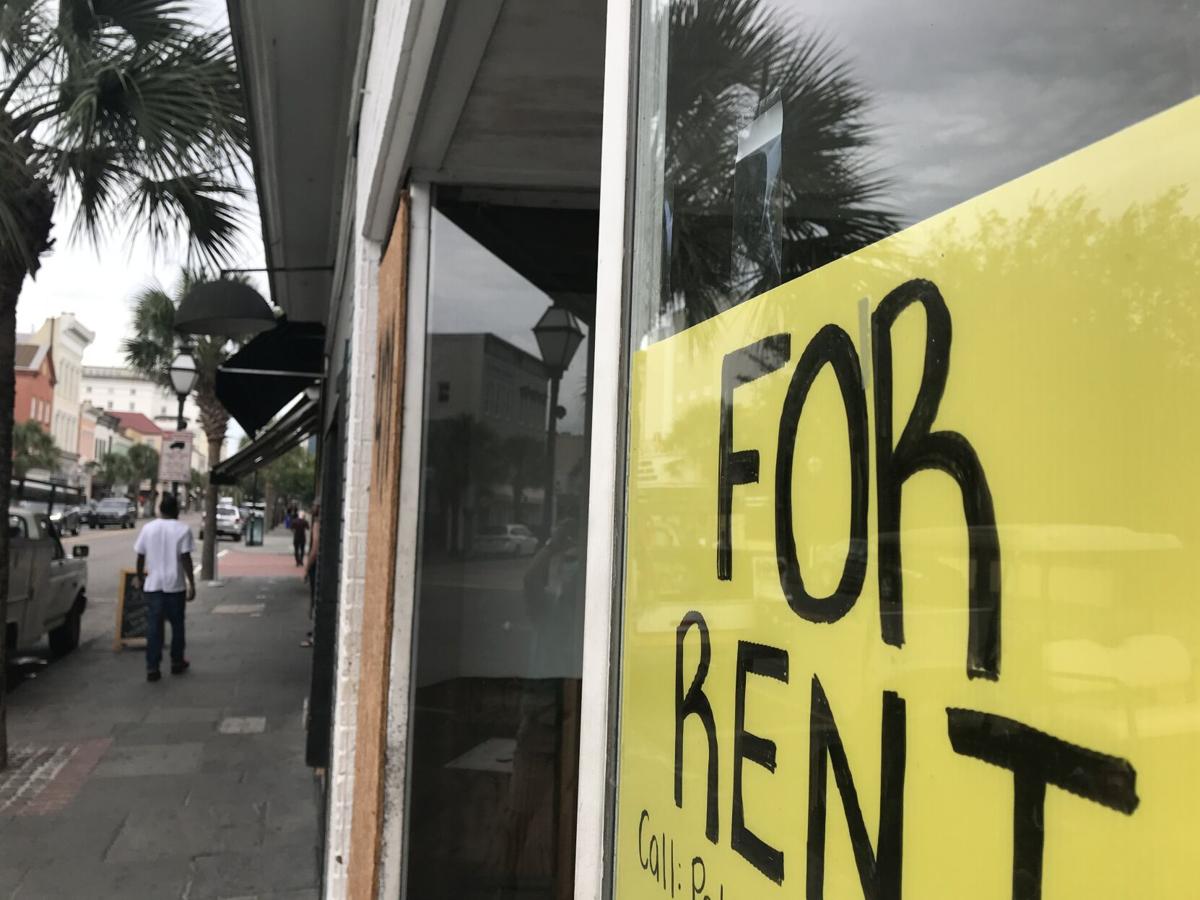 A "For Rent" sign calls out from a window of a vacant shop on King Street in downtown Charleston, one of many that can be seen from the effects of the pandemic and the late May riot. Warren L. Wise/Staff 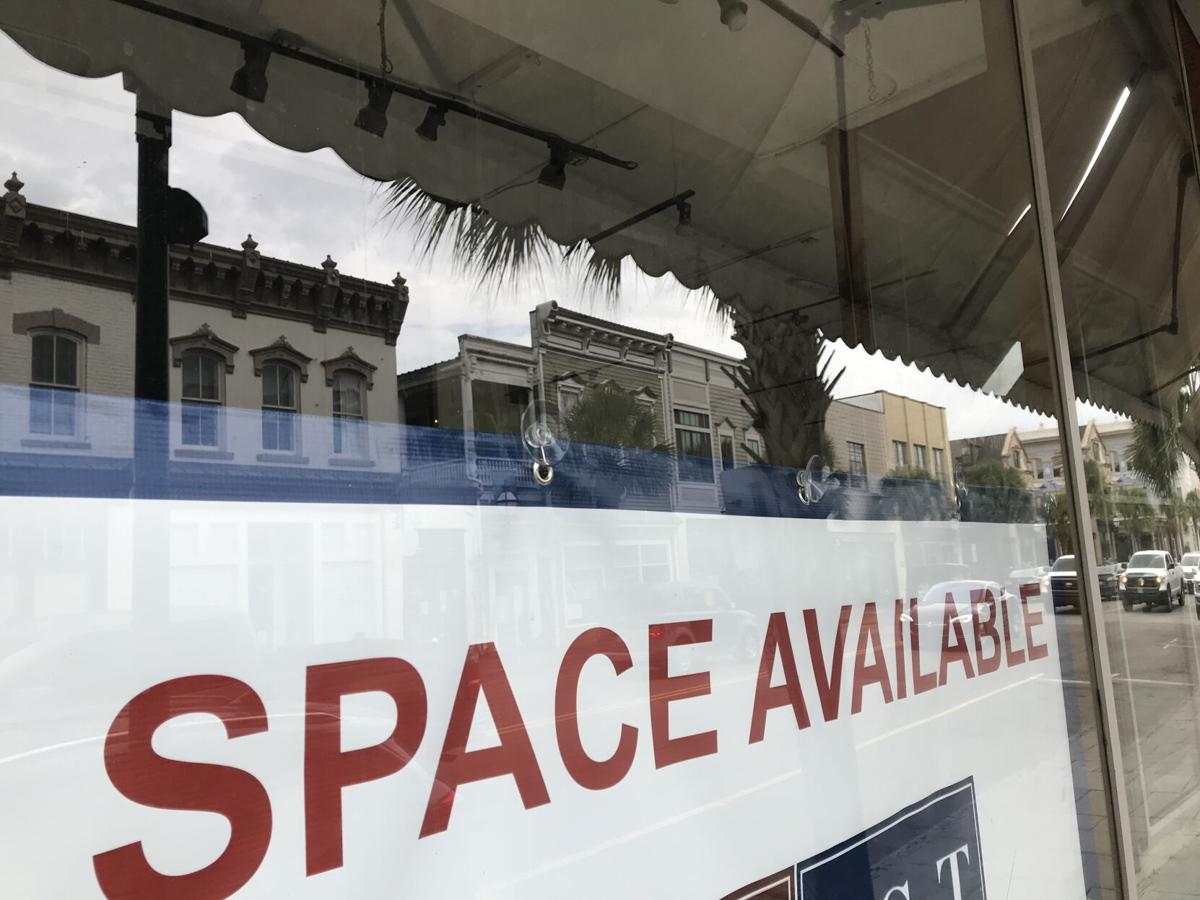 Signs like this can be seen along King Street from the effects of the pandemic and the late May riot in downtown Charleston. With about 17 percent of the retail space vacant between Spring and Broad streets, some real estate professionals say now may be the time to set up shop with a good deal on rental rates. Warren L. Wise/Staff

Lower King Street's retail shops normally bustle with activity in early spring. A view from Belmond Charleston Place in March showed a starkly different scene after COVID-19 outbreak restrictions were announced. The city's retail district has yet to recover from the health crisis and the May riots. File/Andrew J. Whitaker/Staff

A sign in the window of a business on King Street in downtown Charleston shows a space available for retail. It's not the only one that can be seen along a shopping district affected by twin maladies of the coronavirus pandemic and fallout from the late May riot. Warren L. Wise/Staff

Downtown Charleston's King Street has long been known as the crown jewel of the region's retail world.

But the pandemic and the early-summer rioting have taken their toll.

Up and down what was deemed a few years ago as one of the 10 top urban shopping corridors in America, signs such as "For Rent" and "Retail Space Available" call out on vacant storefronts.

Ailing retailers such as Forever 21, Jos. A. Bank and the parent company of Loft pulled out of the shopping district after the government-ordered coronavirus lockdown shuttered businesses during the spring, leaving many national retailers with no choice but to file for bankruptcy protection and trim their store counts.

Restaurants already on the cusp of shutting off the lights left, too.

The Apple store was one of the first in the nation to reopen after the lockdown was lifted in the spring. It was forced to close again after being looted during the late-May riot in the wake of the killing of George Floyd by a Minneapolis police officer. It recently reopened on a limited basis.

Daylight reveals path of destruction in Charleston from looting, vandalism after protests

Most businesses have welcomed customers again after quickly making repairs to storefronts, but the vacancies left in the wake of the pandemic and the rioting have surprisingly not had an effect on rental rates.

That's expected to change if the number of empty storefronts remains constant for very long.

"Since February, people have predicted to me that rents on King Street are going to plummet, and people will dump buildings," said John Orr, who specializes in retail properties at the commercial real estate firm Lee & Associates in Charleston. "I haven't really seen it."

He believes the federal stimulus money has propped up businesses for now to keep them operating, and landlords "have been kicking the can down the road" by helping out merchants with deferred or forgiven rent payments.

"There is a point where the music stops and somebody is going to end up without a chair," Orr said.

He also pointed to the effect of less foot traffic from fewer tourists and restaurants that until early October were operating at lower capacities to meet health guidelines.

Change on the way?

A September report from city planning officials shows the vacancy rate at 17 percent between Spring and Broad streets and pedestrian traffic at just above half the levels from pre-pandemic highs.

"By and large, activity has reduced tremendously since last year," Orr said of activity on King Street. "It's financially unfeasible in the long term. I don't see how rents can continue to maintain historic highs."

Rental rates are different for various parts of King Street, running from more than $35 per square foot on lower King to upwards of $70 or $80 in middle King and in the $40 range on upper King.

The square footage of vacancies on King Street is among the highest Welch can remember in recent years.

"When you have that much competition for vacancy, you have an incentive from landlords to make a deal," she said.

Patrick Price of Charleston-based developer PrimeSouth Group, which has several properties on King Street, said landlords are doing what they can to help tenants.

"They might keep the rates the same, but they might make the deals different," Price said. "We are doing whatever we can to attract and keep tenants. It doesn't help the Charleston community if landlords let tenants go dark."

He said upper King, where rents aren't quite as high as in blocks farther south, has held up better during the downturn. But he believes stability is needed in the marketplace to sustain current and future business interests on King Street.

"You can't have half open, openings and closings, and back-and-forth and up-and-down rules," Price said. "It's unpredictable."

On the flip side, he said, struggling businesses might want to negotiate for better rental terms during what is an uncertain time for both tenants and landlords.

"If you can cut a better deal, you can structure it a little better," Price said. "Everybody realizes we are all in this together."

Furloughed restaurant worker Adam Miller recently launched a small, new shop on King Street and found at least one building owner willing to work with him on the rent. Two other landlords were less receptive.

Miller, who has been idled from his dining job since the spring lockdown, decided in early September to strike out from an online-only side business of selling Charleston-themed items to renting a 336-square-foot space at 194 King. His new brick-and-mortar store is called 843 Shop, a nod to the Charleston region's area code.

"I looked at two other sites," he said. "Both were larger, but this was the most accommodating with the rent."

The site, owned by The Beach Co. in the ground floor of Kings Courtyard Inn, previously housed eyewear shop Friedrich's Optik, which closed July 1, another victim of the pandemic.

A representative of The Beach Co. did not respond for comment, but Miller said he was allowed to prorate the traditional upfront deposit over the first six months. The landlord also didn't require a long-term commitment of usually four or five years, but allowed him a six-month lease with the option to renew it twice for two years each.

"It sounded like they wanted somebody in the space and wanted to work with somebody to get somebody in there," he said. "When I was looking at other spaces, they were not very accommodating. I feel very lucky to be here."

Miller didn't want to divulge the rental rate he is paying.

"It was affordable but still higher than rates five years ago," he said.

Price of PrimeSouth said King Street has a certain rhythm, but it stopped humming during the height of the pandemic lockdown and was nearly silenced in the immediate aftermath of the riot.

"The vibe was off," he said. "What we need to get back is tourism. It's starting to come back some, and the street is a little bit busier."

"I get calls from people in the Northeast who want to move their business down here," he said. "I think people are moving here because we are going back to normal more so than where they are coming from."

Price said it's not all gloom and doom for the region's premier shopping district. He pointed to new venues for cookies, clothing and food on King Street, including the recently opened Mario's Italian Ristorante and a Subway restaurant coming to the former Ice and Pan location, both on upper King.

"We are close to getting a regional retailer in a space next to Indaco," Price said of the empty storefront beside the rustic Italian restaurant on upper King.

Also, cosmetics shop Bluemercury recently moved from a smaller space to a larger shop on King Street, tripling its square footage to take advantage of some of the open space downtown.

"This time is different from 2008 when nobody was helping anybody," Price said. "We don't want to drive anyone out of business. We have adjusted where we needed to — to help out."

On the lower end from Market to Broad streets, annual rental rates can run from the upper $30s per square foot into the lower $40s.

For middle King, between Market and Calhoun streets, rates tend to be more than $70 or $80 per square foot.

On upper King, north of Calhoun, rates tend to be in the low $40s per square foot.