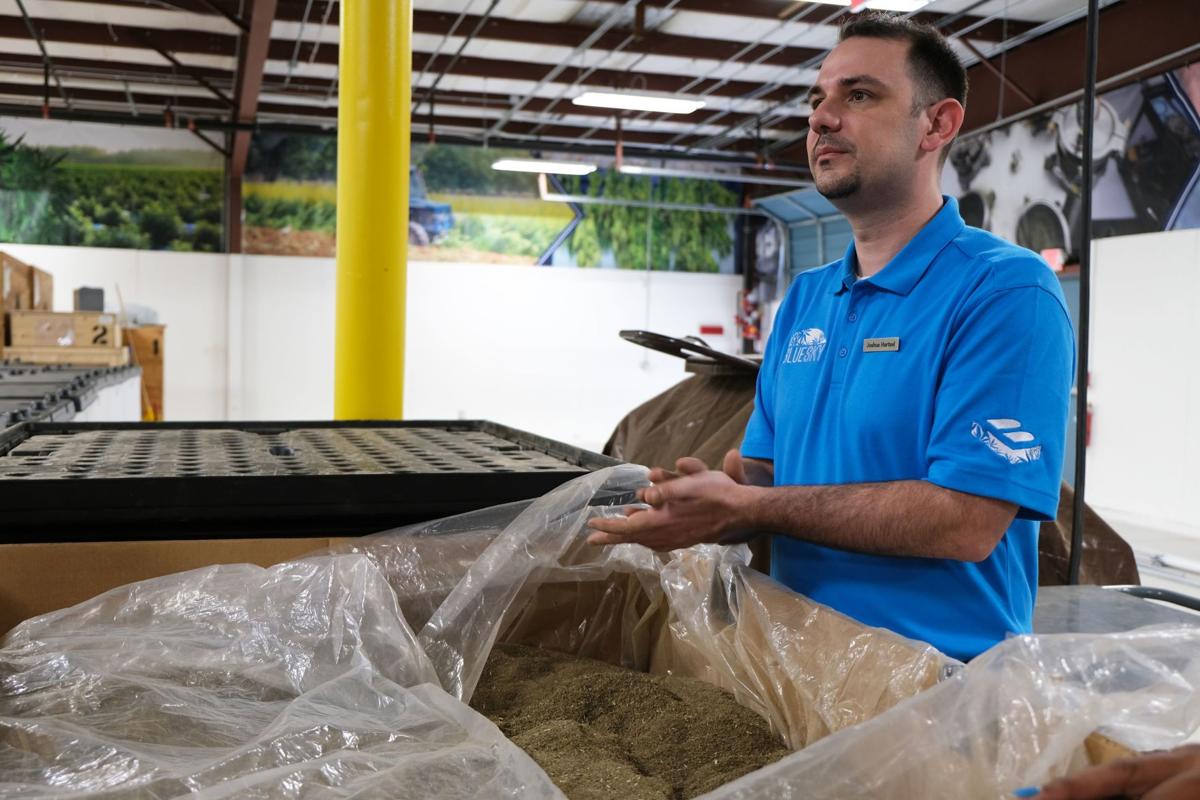 Blue Sky Processing CEO Josh Hartsel explains the refining process as he gives tours of the company’s Beaufort facility during its opening in May. The company is one of the first hemp-related businesses in South Carolina to receive incentive funds. Provided/Blue Sky Processing 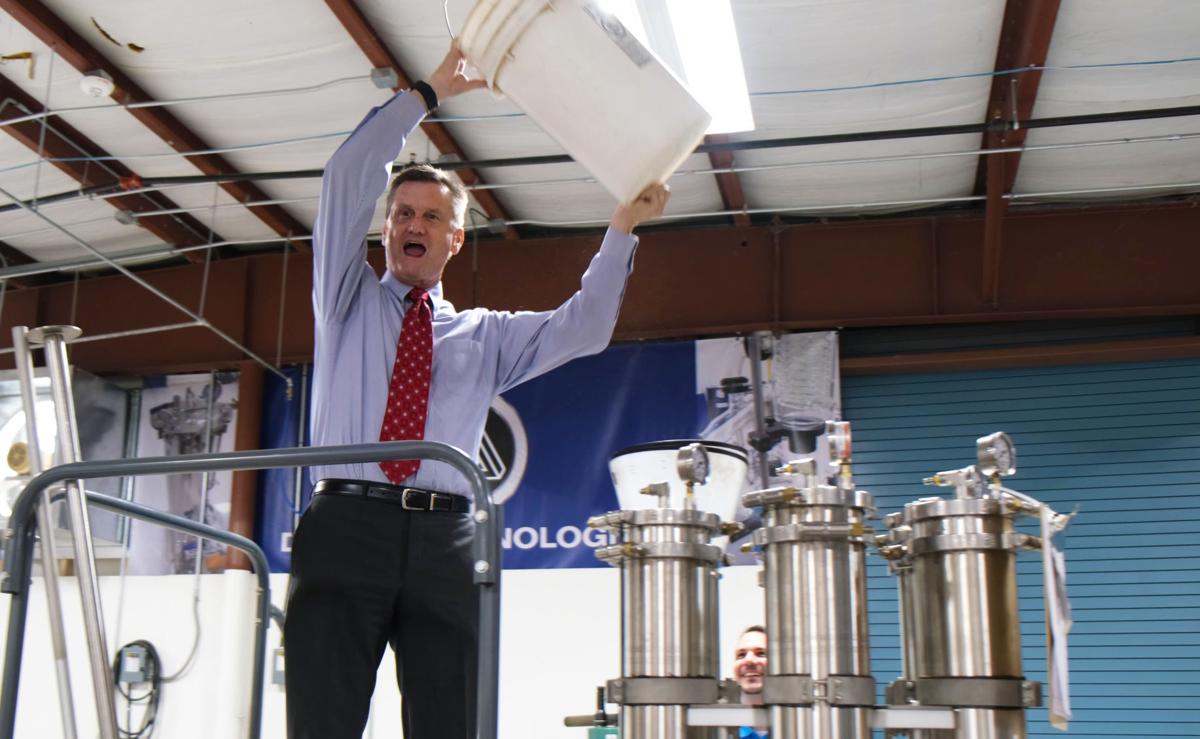 Republican state Sen. Tom Davis of Beaufort celebrates after dumping biomass into an extraction machine at Blue Sky Processing during the company's opening event in May. Davis has been a strong advocate for the agricultural hemp and medical cannabis industries in South Carolina. Provided/Blue Sky Processing

As the companies that make CBD and other agricultural hemp-related products go mainstream, they're starting to seek some of the same tax breaks that traditional manufacturers have enjoyed for years.

The latest such deal could happen Monday, when Dorchester County Council is scheduled to give final approval to property tax breaks for Magnolia Botanicals, a joint venture between United Cannabis Corp. and Blue Water Green Bridge LLC.

Magnolia wants to convert South Carolina-grown hemp into CBD oil and other products targeted toward the health and wellness market. Eventually, the company plans to grow and process its own hemp. Magnolia plans to invest at least $2.5 million in a plant near Ridgeville that will create at least 10 jobs over a five-year period. In exchange, the county will essentially cut its property tax rate to 6 percent from 10.5 percent.

It's not the first time public money in South Carolina has gone toward a hemp firm. Blue Sky Processing, which opened in May in Beaufort County, received a $50,000 state grant to upgrade a 15,000-square-foot building where it extracts CBD oil from hemp.

"We explored opportunities to take our processing operation into spaces with more advanced hemp programs, but unanimously decided South Carolina was the place to be," said Jennifer Pfuhl, Blue Sky's president. "We all love the weather, wildlife and people here."

Still, the industry is relatively new and untested, with the passage of a federal farm bill just one year ago kickstarting its growth by legalizing industrial hemp crops. The industry recorded $1.1 billion in revenue in 2018, and estimates of its potential by industry analysts run the gamut — from doubling over the next three years to as much as $22 billion by 2022.

Such uncertainty has some worried that governments and investors are blindly embracing an industry that essentially didn't exist five years ago.

Cory Sharp, president of HempLogic and a hemp farming consultant in Oregon, said people are too eager to jump on the hemp bandwagon because of recent industry hype.

"It's the Wild West right now," he said. "There are too many players and so much going on that this industry changes by the day."

Sharp said governments would be wise to step back and wait for the industry to compile a track record before putting public money at risk.

"Make the companies prove themselves first and then give them the tax breaks," he said. "We've got a good three or four years before the industry even starts to stabilize."

CBD is popular in SC, but adults and children with health issues should be extra careful

John Truluck, economic development director for Dorchester County, declined to comment on Magnolia, saying he can't talk about deals that have not been finalized.

The S.C. Commerce Department said it treats the hemp industry just like any other business when considering tax and other incentives.

The agency "evaluates projects on a case-by-case basis, taking into account a number of different factors," said agency spokeswoman Alex Clark, adding there are no internal guidelines related to hemp processors, CBD businesses or any other particular industry.

"Our team works very closely with local governments and local economic developers in the recruitment of industry to ensure that the county in which the project is proposed to locate is in full support of the company and proposed project," Clark said.

Dorchester County Council has given unanimous approval to the Magnolia project without any discussion at two previous meetings, leading to Monday's final vote.

No hemp-related firm has approached Charleston County for incentives but "we are not sure they would qualify for financial incentives as an agricultural project," spokesman Shawn Smetana said.

Berkeley County spokeswoman Hannah Moldenhauer said the county hasn't had any requests for tax breaks from such a business. The county doesn't provide incentives for agricultural operations.

'Close to the farmer'

Golden, Colo.-based United Cannabis declined to comment for this report, but Earnie Blackmon, the company's chairman and CEO, told the Stock Day Media podcast in July that his staff had visited the Dorchester County site that month and "deposits have already been sent on equipment."

Blackmon told the Proactive Investors YouTube channel in June that United Cannabis is "actively locking down farmers right now to supply the needs of that facility" in Dorchester County, adding the South Carolina site is part of the company's desire to build "close to the farmer."

"Certainly we could just build a massive facility in Colorado and truck it all in, but I think being closer to the product is the way to go," he said.

A filing with the Securities and Exchange Commission shows the South Carolina plant would be able to process up to 25,000 pounds of harvested hemp per day in a 50,000-square-foot facility. The company expects to extract more than $300 million worth of CBD product at the site annually.

Those products are aimed at people with medical conditions such as neuropathy, arthritis, sleep problems, anxiety and other issues.

The other partner in the Magnolia joint venture is operated by Charleston resident Richard Mudd, a retired professional golfer turned cannabis grower who has experience operating a medical marijuana business in Maine.

"South Carolina's industrial hemp market is still in the nascent stages, with one growing season in the books," Mudd said in a statement, adding the state Department of Agriculture — which regulates the hemp-growing industry — is quickly increasing the number of licenses granted to farmers.

United Cannabis is publicly traded on the over-the-counter market, with shares priced at about 17 cents last week. In the nine-month period that ended Sept. 30, the company had losses of $17.6 million and a working capital deficit of $12.1 million, according to another SEC filing. United Cannabis claimed assets totaling about $9 million at the end of the third quarter.

The company was originally formed as My Skin Inc. in 2007, providing management services to a medical spa in Los Angeles. The company changed its focus to the cannabis industry and moved from California to Colorado in 2014, the first year that marijuana sales became legal in that state.

United Cannabis has had a few growing pains that are playing out in courtrooms.

The company is being sued over a joint venture in Colorado where its one-time partner accuses United Cannabis of falsifying expenses, hiring an incompetent grower, failing to disclose financial interests and falsely claiming a hailstorm destroyed crops. A judge ordered that case to be heard by an arbitrator.

United Cannabis denies any wrongdoing in those lawsuits and is counter-suing the farming partnership over equipment it claims is being wrongfully withheld. A trial in that case is set for July 2020.

Editorial: SC hemp farming could be chilled by arrest, destruction of crop

South Carolina is seen as "a new and emerging market" in Hemp Industry Daily's report on the best places to do business, which notes the Palmetto State is one of a handful "where conditions are ripe for a thriving hemp industry in the years to come."

Gov. Henry McMaster signed a bill this year that expands the number of permits that can be issued to hemp growers. While 40 were issued prior to the bill, there are now 114 farmers with approval to grow as much hemp as they want. Previously, they were limited to 40 acres apiece.

"Interest in hemp continues to grow each day and this expansion will help South Carolina become competitive throughout the entire country," Hugh Weathers, the state's agriculture commissioner, said when the bill was signed.

Other states are looking to incentivize the industry. Kentucky, for example, recently provided $1.8 million in tax breaks to a business that will extract CBD from state-grown hemp and another $2.4 million in tax and wage credits to a firm that plans to make a CBD-infused energy drink.

Other states, however, are providing performance incentives that companies can keep based on reaching stated milestones within the first five years. In Nevada, if the companies don't reach their goals, they have to pay back the incentives.

For Jones, the hemp farming consultant from Oregon, that sounds like the best way to approach incentives for such a developing industry.

"Make them prove themselves first, then give them the tax money" he said.