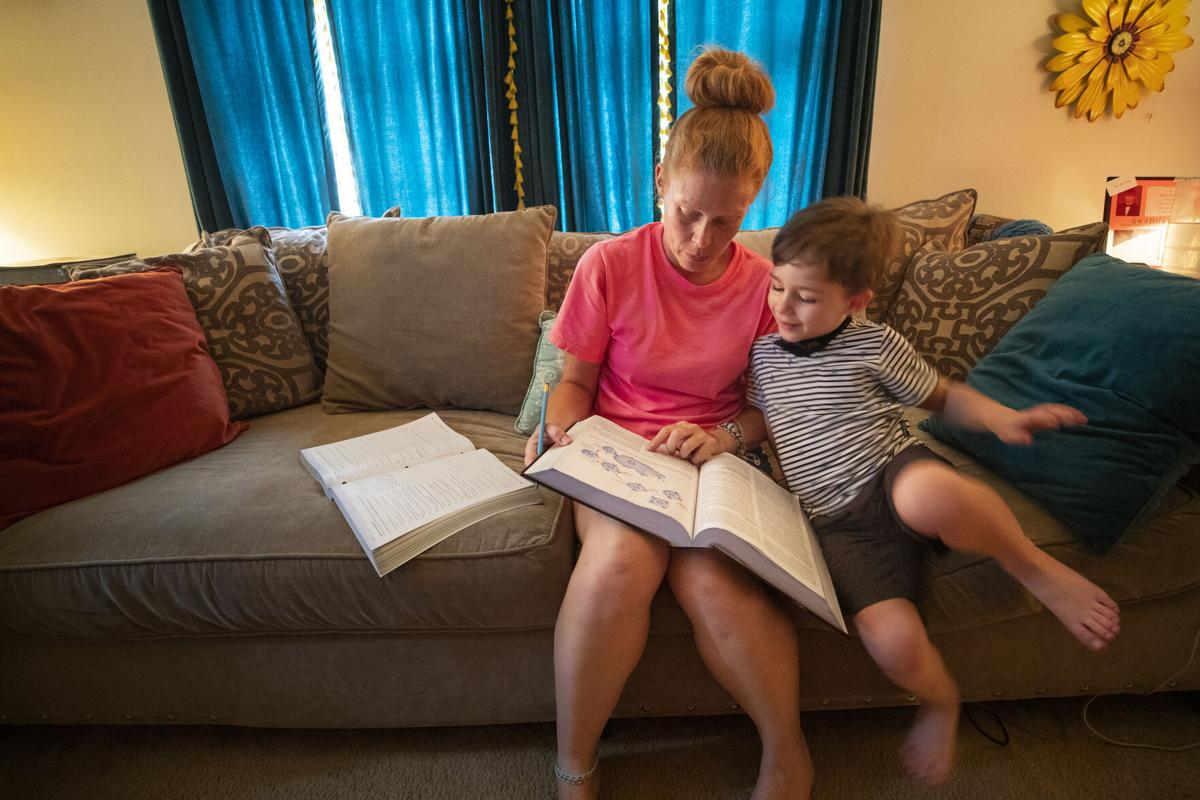 Stacia Canady looks through one of her textbooks with her son, Hendrix LaRue, 4, in their home in Goose Creek on Friday, July 17, 2020. When Canady was laid off from her job in April due to the pandemic, she decided to go back to school to become a medical assistant. She’s also among millions of Americans who benefited from an extra $600 per week that federal lawmakers tacked on to state jobless benefits earlier this year. Lauren Petracca/Staff 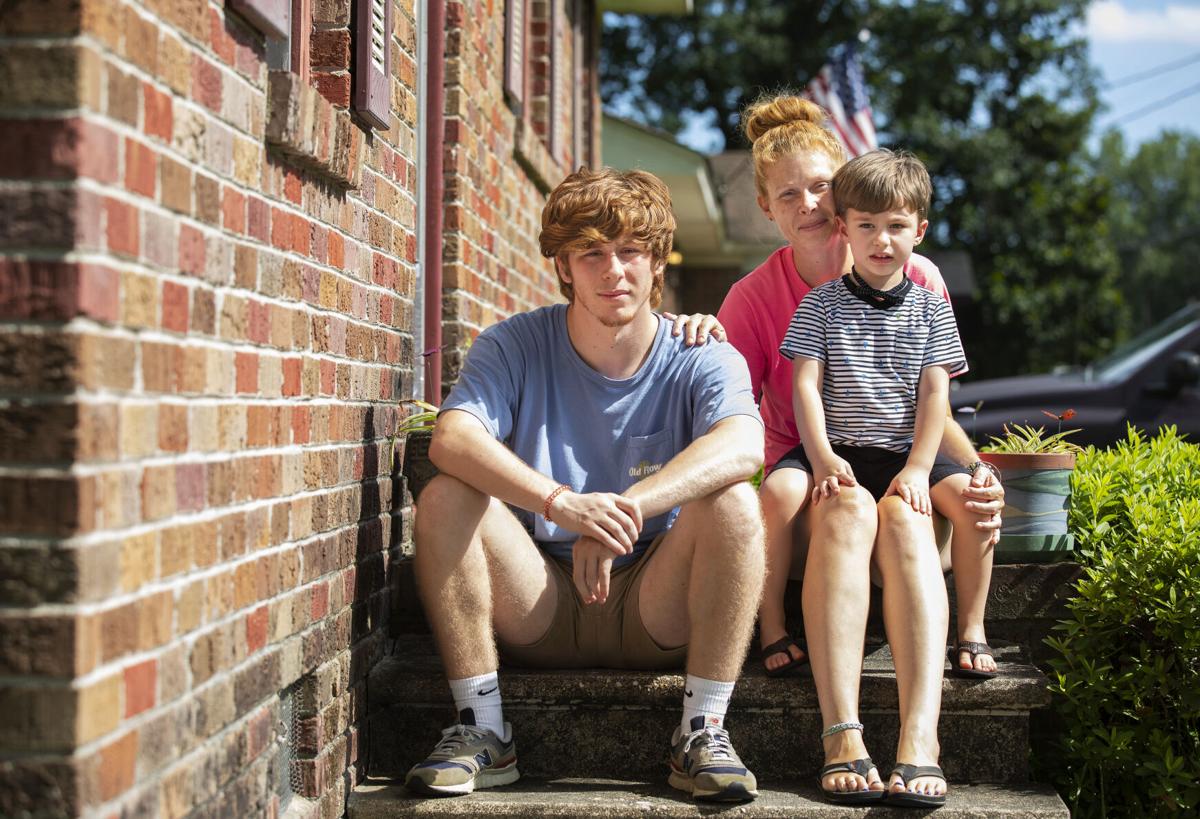 Stacia Canady sits on the steps of the home she is renting with her sons, Gavin Canady, 19, and Hendrix LaRue, 4, in Goose Creek on Friday, July 17, 2020. Lauren Petracca/Staff

Stacia Canady looks through one of her textbooks with her son, Hendrix LaRue, 4, in their home in Goose Creek on Friday, July 17, 2020. When Canady was laid off from her job in April due to the pandemic, she decided to go back to school to become a medical assistant. She’s also among millions of Americans who benefited from an extra $600 per week that federal lawmakers tacked on to state jobless benefits earlier this year. Lauren Petracca/Staff

Stacia Canady sits on the steps of the home she is renting with her sons, Gavin Canady, 19, and Hendrix LaRue, 4, in Goose Creek on Friday, July 17, 2020. Lauren Petracca/Staff

After years of financial struggles, Stacia Canady landed a job last year as a receptionist at one of the many warehouses linked to Charleston's growing international port.

She was put in charge filing paperwork, answering the phones, welcoming office visitors and assisting the army of truck drivers arriving at the building.

At $12.50 an hour, the position provided Canady, 42, with more money than she'd ever earned. She finally felt like she made it.

The job allowed her to more easily afford her three-bedroom apartment in Goose Creek. She was able to spring for an internet connection for the first time. And she delighted in the idea of saving up enough money to take her children on a vacation 25 miles away on Folly Beach where she planned to rent a hotel room for a long weekend.

But that was before April, before the global pandemic and before a national recession stripped her of her job, her meager savings and her financial security.

Now, Canady is just one of the more than 685,000 South Carolinians who sought out the unemployment system in recent months to support themselves and their families.

She’s also among millions of Americans who benefited from an extra $600 per week that federal lawmakers tacked on to state jobless benefits earlier this year.

That federal money allowed Canady and a huge segment of the country’s workforce to pay their rent, food, mortgages, student loans, credit cards and other bills during one of the worst economic crises in the country’s history.

But that assistance could also be stripped away from her.

The federal unemployment payments are set to expire Saturday, and Congress is locked in a dispute over whether to extend them. Many Republicans are resistant to the additional money because they allege it will prevent people from returning to jobs that are available.

Without the additional support, Canady is concerned she won’t be able to cover her electricity bill, her $500 rent payment and the repairs on her car that is leaking oil.

Under South Carolina’s unemployment system, the most money someone can collect is $326 per week. But Canady, like many other people who lost low-wage jobs, will be forced to scrape by with even less.

“This is a really hard time,” Canady said. "Right now, I'm on the verge of getting kicked out of my house. It's scary enough for an adult by themselves, but when you have kids, it's horrible."

It’s not just individuals who are likely to take a hit when the federal unemployment benefits stop flowing next week.

Businesses and local economies are going to feel the effects, too.

More than 200,000 South Carolinians were collecting unemployment benefits earlier this month. If all of those people lose the extra $600 in federal assistance, that means roughly $120 million per week that was being pumped into the state will disappear.

That won't help South Carolina’s already weakened economy. The state has not recovered all of the hospitality, service, education, manufacturing and health care-related jobs it lost in April and May.

The latest employment report by the U.S. Department of Labor estimated that roughly 210,000 South Carolinians who were looking for work still didn’t have a job in June.

Economists believe those numbers would be even worse had Congress not stepped in to pass a $2.2 trillion economic recovery package earlier this year. One of the main components of that bill included the extra $600 per week in federal unemployment benefits.

Joey Von Nessen, a research economist with the University of South Carolina, said the expanded unemployment benefits provided a “lifeboat” for people and the economy.

It allowed people who lost jobs to continue to make purchases or pay down outstanding debts as the economy contracted and jobs vanished amid the pandemic.

That consumer spending dropped dramatically earlier this year, and it only recovered after federal funding started flowing into the state. The worry is that the loss of the federal unemployment benefits will dampen spending again and weaken the nation's economic recovery.

“It’s pretty clear that the people who had been getting the extra unemployment will see their spending decline if that money expires,” said Laura Ullrich, a regional economist with the Federal Reserve Bank of Richmond.

That, in turn, could hurt businesses that are still trying to recover from revenue losses from earlier this year. It could also lead to people defaulting on loans, filing for bankruptcy and being evicted from their homes.

There is a growing consensus among economists that the United States needs another round of government stimulus to assist the economy, Von Nessen said.

Federal lawmakers and President Donald Trump’s administration are in the process of debating such plans this week. But there are disagreements over what that stimulus should include and what groups it should be directed toward.

Many Republicans in Congress are opposed to extending the federal unemployment payments any further, which is why the money could run out this week.

Lindsey Graham, South Carolina’s senior senator, has been one of the primary critics of the federal unemployment assistance.

In April, he made it clear that he would not support an extension of the federal funding under any circumstances.

“Over our dead bodies will this get reauthorized,” Graham said, referring to himself and fellow South Carolina Sen. Tim Scott. “We’ve got to stop this.”

The Republicans’ primary concern is that the extra $600 in weekly income is discouraging some people from returning to their previous jobs or finding new opportunities.

The reason for that is because people who held low-wage jobs before the pandemic can actually earn more money through unemployment benefits than they did at work. That doesn’t happen with the maximum $326 per week that people are eligible for through South Carolina’s unemployment trust fund.

Traditionally, the unemployment system is not meant to replace all of the income people lose when they are out of work. It’s intended to provide limited support until people can reenter the workforce.

But many federal lawmakers saw the benefit in supplementing people’s finances as states shut down businesses and implemented public health restrictions to fight the virus. There were no jobs for people to fill.

Von Nessen, the USC economist, said there is an incentive for some people to remain out of work as long as they are eligible for the enhanced unemployment benefits. But there is also no denying the extra $600 per week helped boost consumer spending throughout the country in recent months.

“There is a trade-off,” Von Nessen said.

The question now is whether it’s a good idea to cut off that money to millions of unemployed Americans while coronavirus cases continue to surge throughout parts of the country.

Democrats in the U.S. House already passed a bill earlier this year to extend the extra federal unemployment aid through the end of the year.

But Republicans in the Senate are still debating what to do. Some Republicans, according to The Washington Post, are considering whether it would be better to shrink the federal unemployment payments from $600 per week to $200 or $100 per week.

Either way, the national unemployment numbers suggest that not everyone is going to have a job to return to in August.

Canady is one of those people, at least for now.

She’s not received a call from her former employer asking her to return to work, and she’s been unable to find a full-time position to replace that job.

In the meantime, she’s working roughly 12 hours a week at a friend’s tattoo parlor scrubbing the bathrooms and cleaning the floors. She’s also started studying to become a medical assistant.

"We are not all just sitting around waiting, not trying to get jobs,” she said. “The jobs just aren't there."