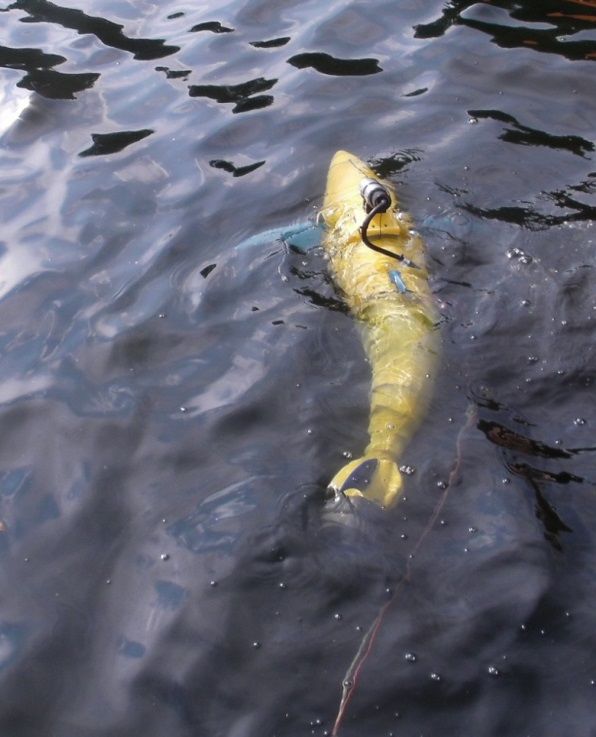 The BIOSwimmer is capable of maneuvering like a Bluefin Tuna and can reach speeds of 46 mph. Provided/U.S. Homeland Security

Agencies in charge of protecting the nation's seaports are looking to the ubiquitous tuna fish for their next cutting-edge tool in the fight against terrorists and smugglers.

Called the BIOSwimmer,  a tuna-shaped robotic spy is being developed by Boston Engineering with funding from the U.S. Department of Homeland Security. Officially termed a semi-autonomous underwater vehicle, the tuna-bot looks and acts like a real fish so it can blend in with surrounding sea life while its cameras inspect harbors, piers and the exteriors of vessels up close and in both deep and shallow waters.

Just as fast − it can reach speeds up to 46 mph − and maneuverable as the Bluefin Tuna it's modeled after, the BIOSwimmer underwent testing at the Port of Charleston this summer for a federal Customs and Border Protection conference. While in Charleston, the robot inspected six ships, one barge and a bridge abutment. It also searched for a lost shipping container in Charleston Harbor.

"They took it out in our waters to do a demonstration and see how it operates in different environments," said Brett Mueller, supervisor of the Charleston office of Customs and Border Protection. Mueller said a team of developers brought the BIOSwimmer to Charleston for two weeks to test its performance in a variety of conditions. Previously, the robo-tuna was tested in Gulf Coast waters near the Port of Houston.

The roughly 5-foot-long robo-tuna is a response to creative criminals using the underwater portion of ship hulls to smuggle goods, according to a Homeland Security news release. The BIOSwimmer also is meant to thwart targeted attacks with improvised explosive devices.

"This next generation unmanned underwater vehicle could be leveraged widely by the U.S. Coast Guard and Customs and Border Protection to inspect ships and piers for contraband and other material," David Taylor, program manager for Homeland Security's science and technology division, said in a statement.

Boston Engineering is developing a similar model for military use, including a BIOSwimmer that can carry a payload of more than 20 pounds.

The robot's ability to twist and turn in limited spaces sets it apart from other remotely operated vehicles that can operate under water, Taylor said. The manmade tuna can inspect the interior voids of ships, such as flooded bilges and tanks, and hard to reach external areas, such as steerage, propulsion and sea chests. Its onboard computer, powered by a lithium-ion battery, can be programmed for specific missions or the fish can be controlled remotely.

The BIOSwimmer is made of carbon composite materials and costs more than most traditional vehicles, but "the cost benefit will be substantial in terms of port and harbor security, reduction in volume of smuggled contraband entering the country, and apprehension of smugglers."

Homeland Security has not provided a cost for the project, but an online database of federal grants shows Boston Engineering has received more than $1.4 million for its Ichtyological investigator, in addition to $700,000 in state grants.

Development of the robo-tuna started about a decade ago with the simple idea of copying a fish, Bob Treiber, Boston Engineering's president, said in a company video. Treiber said some of the firm's staff traveled to Gloucester, Mass., to meet fishing boats as they returned with their catch.

"We bought ourselves a couple of tuna right off the boat," he said. The fish were taken to a local machine shop where they were reverse-engineered using a coordinate measuring machine. Engineers entered the coordinates into a 3-D software program to replicate the fish.

"We worked with biologists to study the skeletal structure of the fish ... how the muscles work, and we watched a lot of video about how a fish swims through water," Treiber said. Using what Treiber terms a "genetic algorithm," Boston Engineering created a digital twin of a real tuna that was able to "evolve" as its computer system learned better ways of maneuvering through water.

Treiber said he foresees a day when dozens of robotic fish will be swimming through the waters, checking for illegal cargo and carrying out military missions.

"It's not hard to imagine schools of underwater robots coordinated, connected, networked and working together," he said.