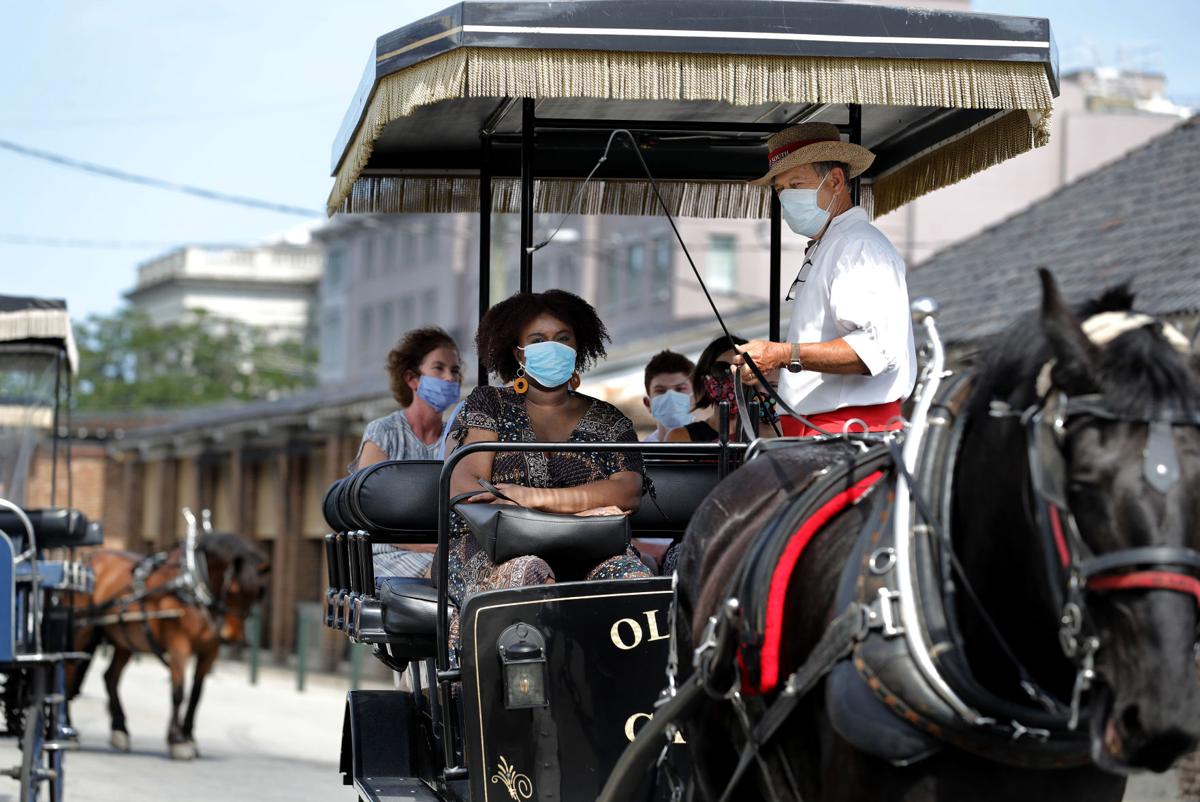 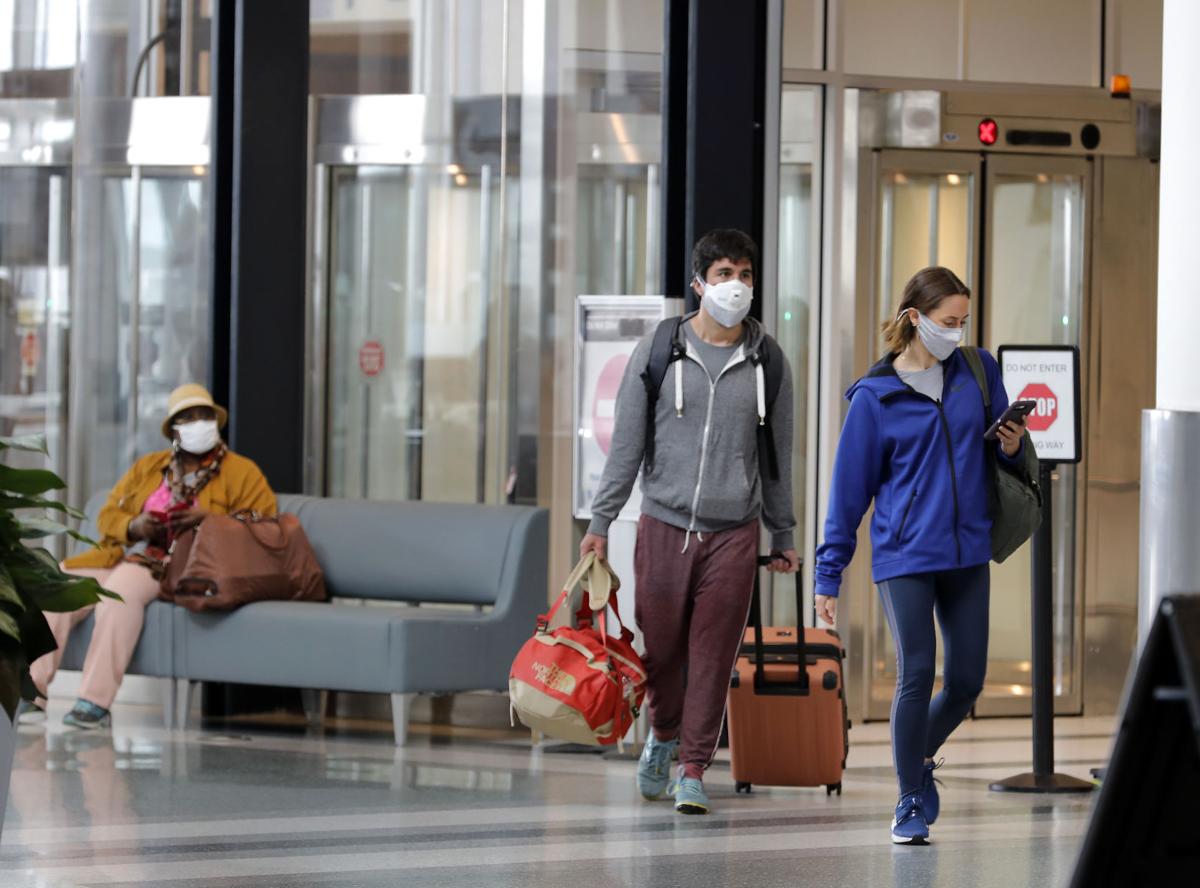 Travelers exit the terminal at the Charleston International Airport on May 24. File/Grace Beahm Alford/Staff

Sitting in front of a Zoom background of Waterfront Park's famous Pineapple Fountain, Explore Charleston Chair Michael Tall kicked off what he described as the "most inexpensive luncheon" the group has ever hosted.

Typically, hoteliers, heads of attractions and other local tourism leaders would pack into a ballroom for a catered meal to celebrate another year of record-breaking visitation to the region.

This time, the in-person gathering was swapped out for a virtual conference, and Tall's introductory message was more about reflecting than celebrating.

"This year is like no other year, ever," he said.

The majority of the about hourlong web conference was a presentation from three heads from Condé Nast, the publishers of the travel magazine whose annual Readers' Choice Awards have ranked Charleston the No. 1 small city in the U.S. for nine years and counting.

Beth Lusko, the company's head of sales for travel, shared some insights from survey data on why the Holy City has emerged as an "anomaly" among other other ranked destinations.

Of the respondents who submitted answers about Charleston last year, one in four were first-time visitors. From that group, 97 percent said they wanted to come back.

Conventions and COVID-19: How SC meeting centers are coping with cancelled events

"That's the highest percentage of wanting to return for any destination that we see," Lusko said by phone after the virtual meeting.

There is clear crossover between readers of Condé Nast Traveler — which frequently features ads purchased by Explore Charleston as well as editorial content about the region — and travelers who favor Charleston.

The Holy City ranks fourth overall for the total number of survey responses submitted about it, Lusko said, behind three much larger cities: New York, Chicago and San Francisco.

And, in addition to claiming a No. 1 spot year after year, Charleston's scores on the survey are also rising "across the board," Lusko said.

"That steady upward slope over half a decade is very unusual. Usually there is more variation," Jesse Ashlock, Condé Nast Traveler's U.S. editor, told the Post and Courier. "Charleston’s trajectory has only been up."

Charleston visitors are also uniquely profuse when it comes to optional write-in responses on the survey, Ashlock said. Some testimonials are more like essays, and a few respondents even included detailed Google maps tracking their favorite spots in the city.

Responses to this year's reader survey are being collected now and will close at the end of the month. Rankings are typically announced in early October.

In their presentation, Ashlock and travel news editor Erin Florio described some of the travel trends they're seeing for the summer, the first being that travel is still definitely happening, despite the ongoing pandemic.

They emphasized the importance of road trips and catering to visitors within driving distance. That's been a key focus for regional and statewide tourism groups which are spending their ad dollars on places within 350 miles of South Carolina, plus Ohio, this summer.

While travel agents haven't been very popular for domestic trips in recent years, it looks like people are turning to them more often for vacations within the U.S. this year, Ashlock said.

After half of SC hotels closed for COVID-19, almost all have either reopened or set dates

The fact that all but 3 percent of first-time visitors to Charleston who answered their survey wanted to return is especially relevant now, Lusko said. Travelers venturing out after stay-at-home orders are seeking familiarity.

A destination's reputation or ubiquity in the travel world will also likely serve it well at this time, Ashlock added.

Tourists are starting to return to the Palmetto State, which is clear from slowly rising occupancy rates and weekly visitor revenues. Explore Charleston CEO Helen Hill also mentioned on the travel council call that air service is "coming back really quickly."

At the same time, new coronavirus cases are climbing in the Charleston area and across the state. On Tuesday, Mayor John Tecklenburg urged city residents and business leaders to wear face masks in public places to help reduce the spread.

At this point, very few hotels in the region remain closed, and restaurants have had their dining rooms open for about a month. Tourist attractions were allowed to resume operations Memorial Day weekend.

Hill also announced another upcoming step for the region's reopening: Explore Charleston's Meeting Street visitor center, which has been closed for renovations since last June, will be unveiled and reopened to guests next month.