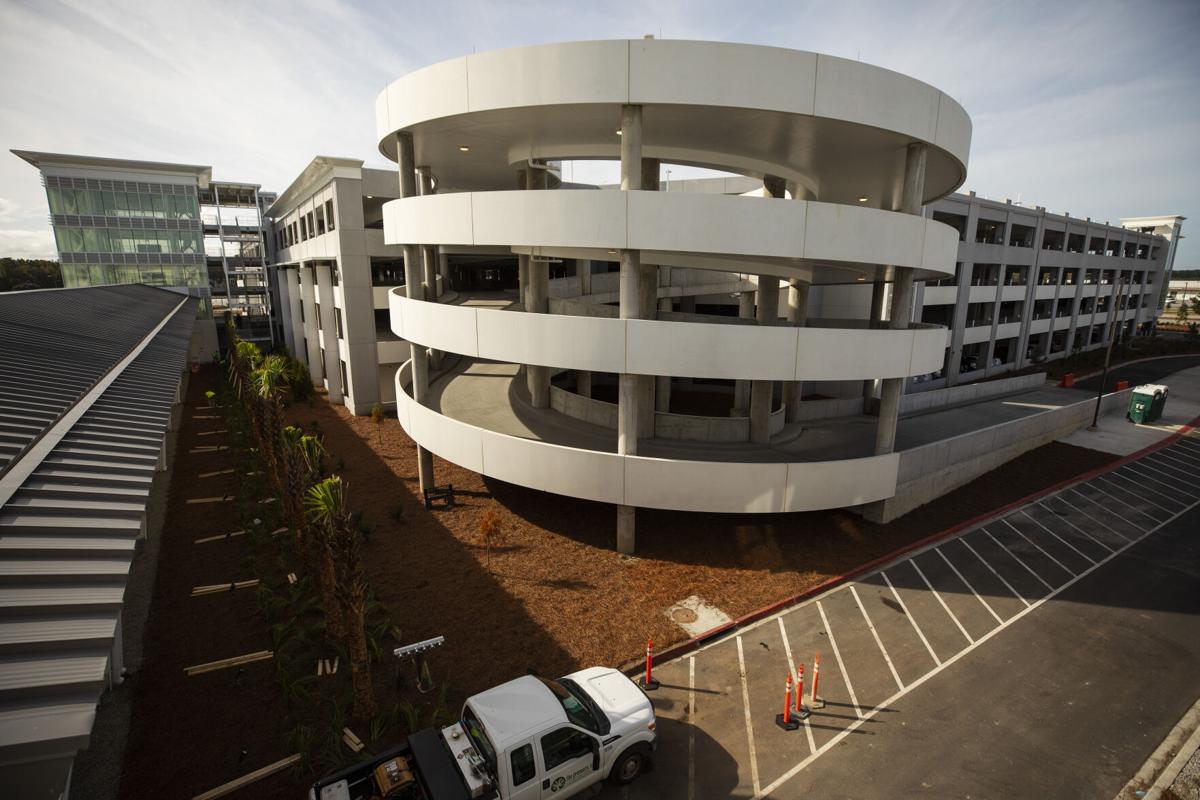 The new parking deck at Charleston International Airport will be dedicated Thursday, just ahead of what before COVID was the annual holiday rush. Lauren Petracca/Staff 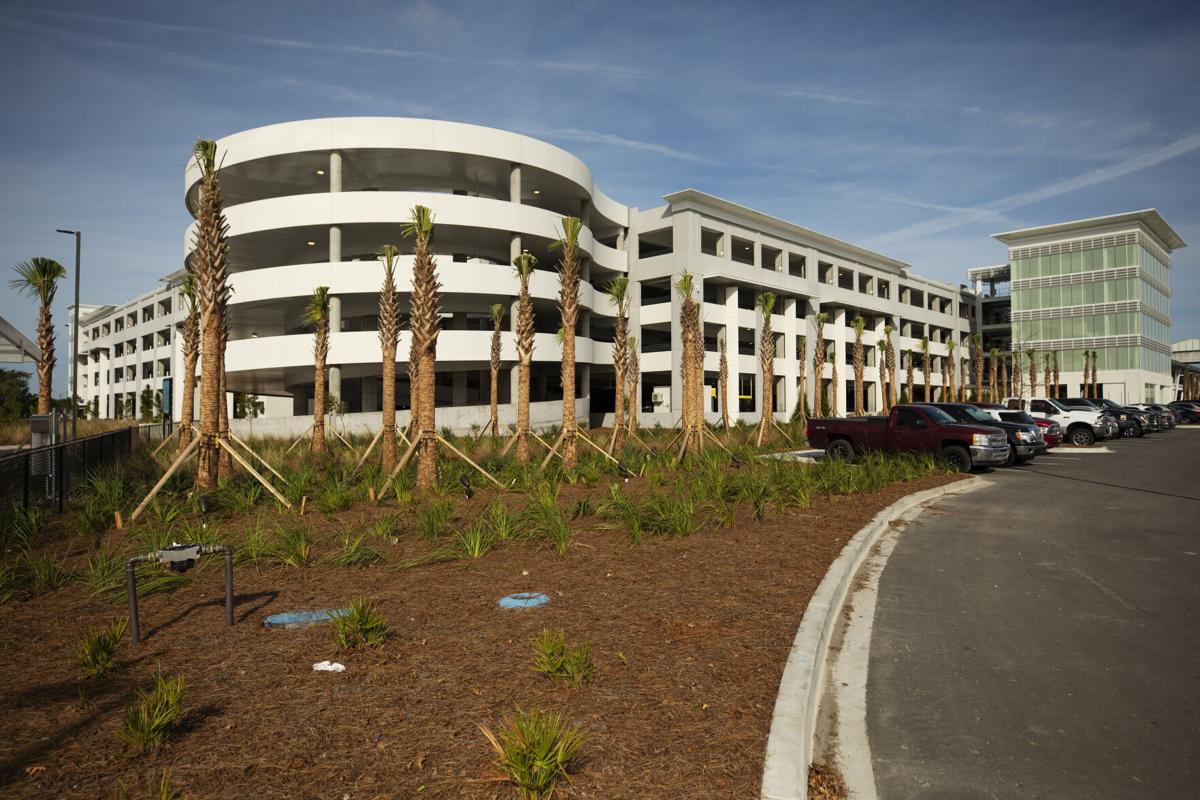 The new five-tier parking deck at Charleston International Airport features 3,005 spaces and an electronic overhead system on each level that lets drivers know where parking spaces are available. Lauren Petracca/Staff 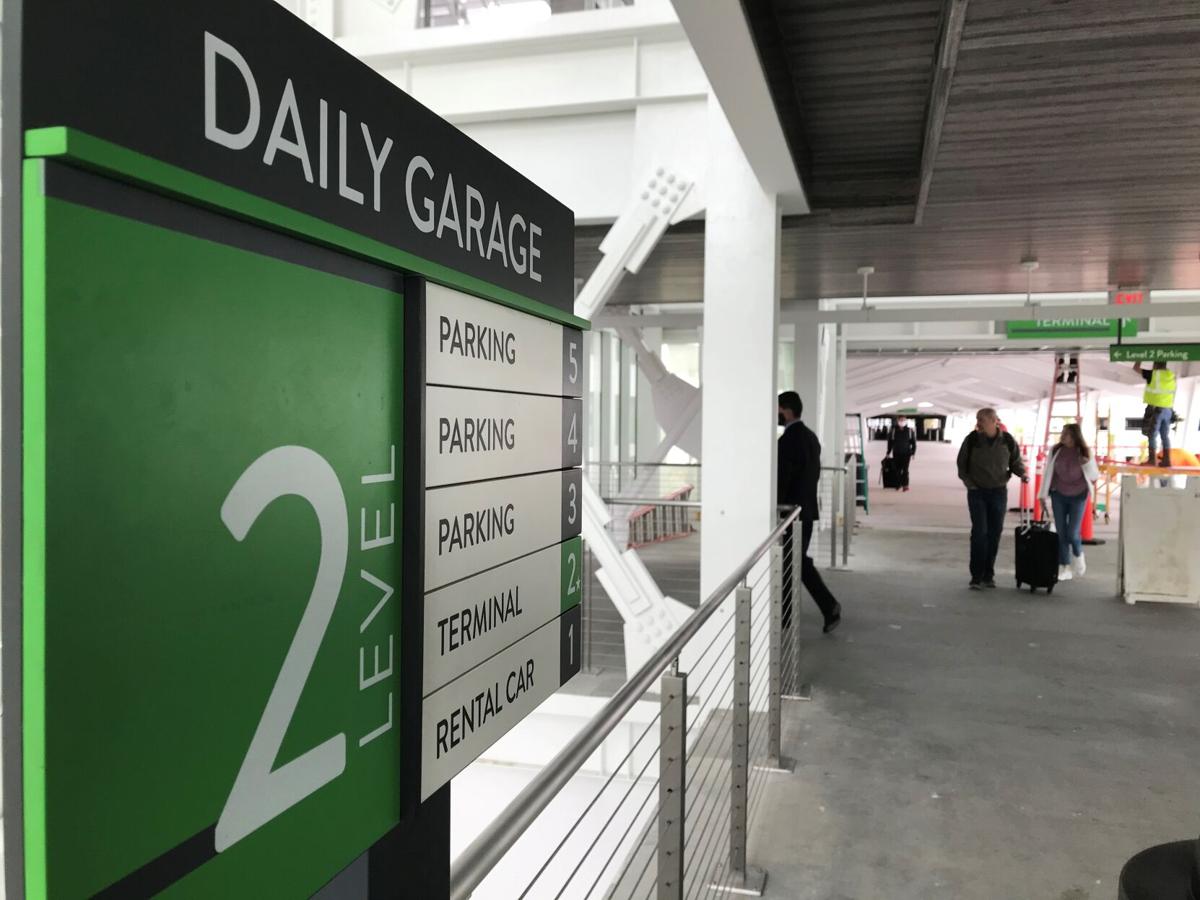 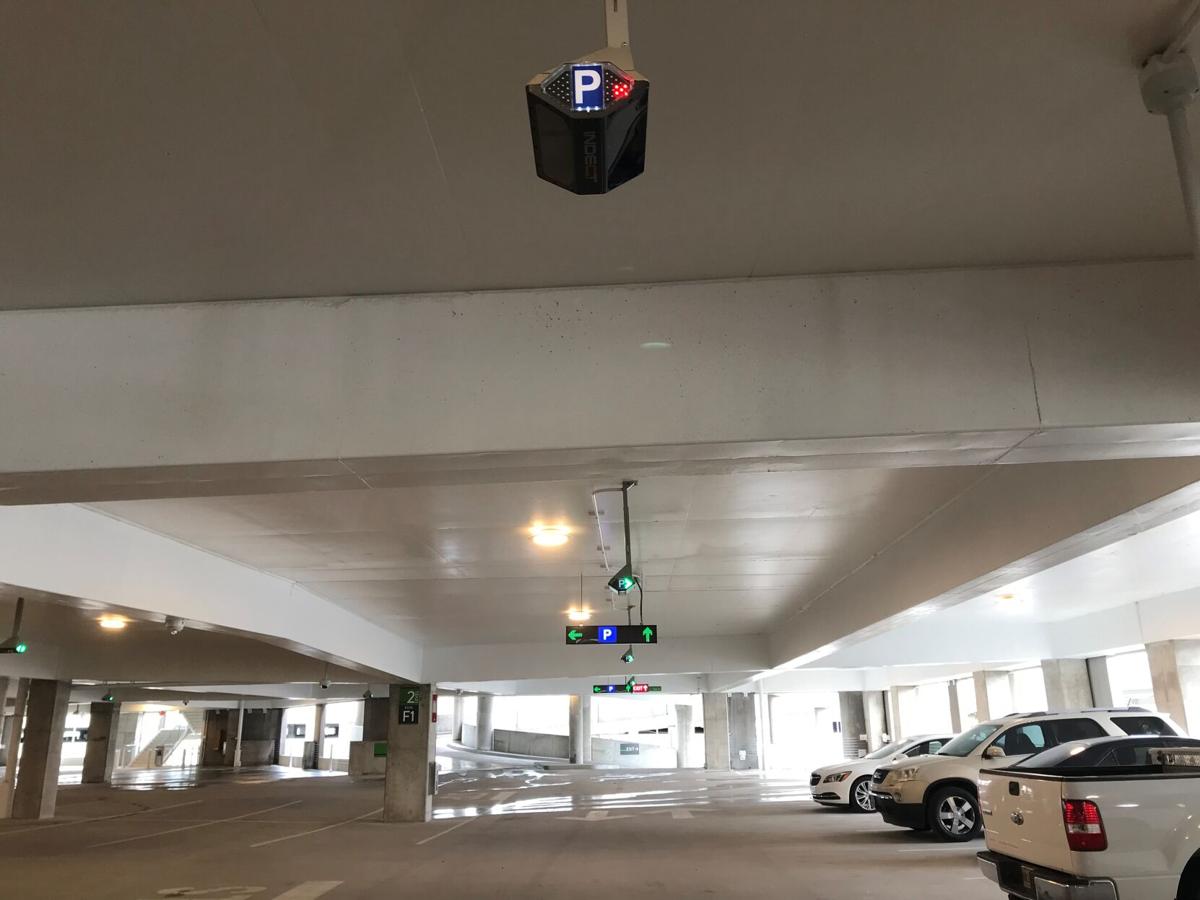 Overhead lights in red and green will let drivers in Charleston International Airport's new five-tier parking deck know if a space is available or not, a feature not available in the existing three-level parking garage. Warren L. Wise/Staff 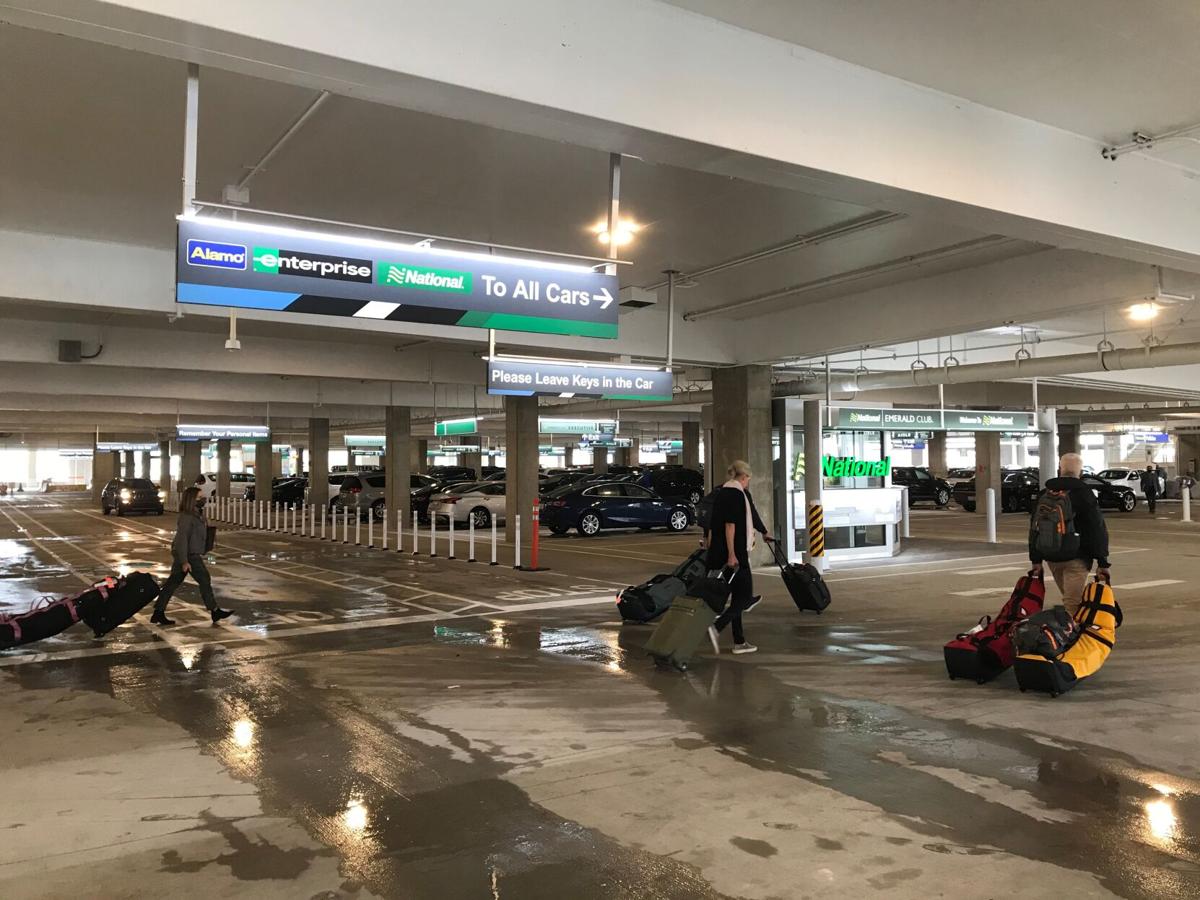 Holiday travelers arriving at Charleston International Airport will find plenty of parking when a new 3,005-space garage opens Thursday, but they'll also be paying higher fees to use it.

Rates in the five-tier structure, called the Daily Deck, will be a maximum of $17 a day or $5 an hour, while the charge to park in the older three-level garage closest to the terminal, now called the Hourly Deck, will change from $15 a day to $21 a day, though the hourly rate will remain at $3.

Also rising is the cost for surface parking. It will increase by $1 to $11 a day, while the hourly rate will jump to $5 from $3.

The higher rates will take effect Nov. 20, the day after the $89 million garage is officially dedicated, according to Hernan Peña, deputy executive director and chief operating officer of the Charleston County Aviation Authority.

Airport CEO Elliott Summey said the higher rates are needed to help pay for the $72 million debt on the new deck and are not in response to the lack of revenue coming into the Aviation Authority because of the plunge in travel brought on by the coronavirus.

"This was part of the overall plan for parking when they were doing construction," Summey said. "It wouldn't make any sense to do it in response to (the revenue decline) because we wouldn't have a lot of folks in there."

Before construction on the deck began in early 2019, the airport board voted to increase the surcharge on car rentals by $1.50 to $5 a day per vehicle to help defray the costs.

That followed a hike in some parking fees in 2016 to bank money for the new deck.

He called the new garage an important addition once commercial air travel recovers.

"Pre-COVID, it was difficult sometimes for everyone to find parking at the airport," Summey said. "We need to have the infrastructure in place to handle the load of people that eventually will be coming to the airport."

Built over the past 21 months, the deck was meant to relieve the pressure on parking from the growth in traffic at the airport, which was projected last January to surpass 5 million passengers for the first time this year.

After the pandemic started, air travel at Charleston International plunged by 96 percent. It has rebounded somewhat to about 40 percent of its usual passenger volume.

The airport now expects just under 2 million ticket holders for all of 2020, reducing the demand for parking space.

John Robison, manager of ground transportation at the airport, estimated about 30 percent of the 2,420 public parking spaces will be occupied until flight levels return to normal. The older garage is now operating at 45 percent to 50 percent of capacity, he said.

Patrons of the new garage will discover overhead electronic signs with red and green lights showing available parking spaces on each level except the uncovered top floor.

People renting cars will no longer have to step out into the weather to retrieve or return vehicles. Rental cars have been moved to the bottom floor of the new parking deck from a staging area beside the terminal. Customers can still rent cars at the pavilion inside the terminal.

By moving rental cars inside the new deck, Summey said space is now freed up beside the terminal for future expansion of an additional wing if demand warrants it.

Peña said the airport is considering using the outdoor space to stage valet service, but no decision has been made since that service is not operational during the pandemic.

Valet parking stands at $21 a day, but the price could change when the service restarts, according to airport spokesman Spencer Pryor.

Parking patrons will find a covered pedestrian walkway beside the new garage that joins the existing parking deck on the second level, leading passengers directly to the terminal.

Also, the new garage was built with an elevator tower at the end of the walkway with space set aside for future elevator shafts if a second five-tier parking deck is ever needed.

Peña also said the rental car area was designed so customers could bypass the rental car pavilion and go straight to a waiting vehicle through special arrangements. That service is available through rental car providers, which now offer booths in the new garage.

Kiosks with monitors displaying flight information are set up on each floor of the new deck and have also been placed inside the second level of the existing deck.

Silver Airways to resume flights from Charleston to 3 Florida cities; 1-way fares from $49

Peña also said the airport can now consider premium parking spaces near the entrance of the older deck since it's closer to the terminal. That has not been acted on yet.

A new traffic circle will steer drivers to the new parking deck, with separate entrances for parking on the upper levels and rental car area on the ground floor.

Construction crews encountered two delays from Hurricane Dorian in September 2019 and at the onset of the coronavirus, but Peña said the project is on schedule and within budget.

One other addition related to parking that passengers arriving at the airport will notice is a new electronic sign in the median of International Boulevard on the way to the terminal.

The sign will indicate available space in each parking area so people will know if a deck or lot is at capacity.

Valet parking: $21 a day (not in operation during the pandemic; unchanged for now)