A trio of Georgia Tech professors have concluded what many people have long suspected: Right-to-work laws aren't good for employee bank accounts.

"Right-to-work laws shift bargaining power from unions to firms and consequently lead to a decrease in worker wages," the educators said in a study to be published in the August edition of Journal of Financial Economics.

The study examines 19,574 collective bargaining agreements struck by labor unions between 1998 and 2016 to determine how wages are affected in the 27 states, including South Carolina, that have adopted right to work laws. Such laws allow employees to join a unionized workplace without having to pay union dues. Even if those workers don't join the union, they are covered by any collective bargaining agreement the union negotiates. 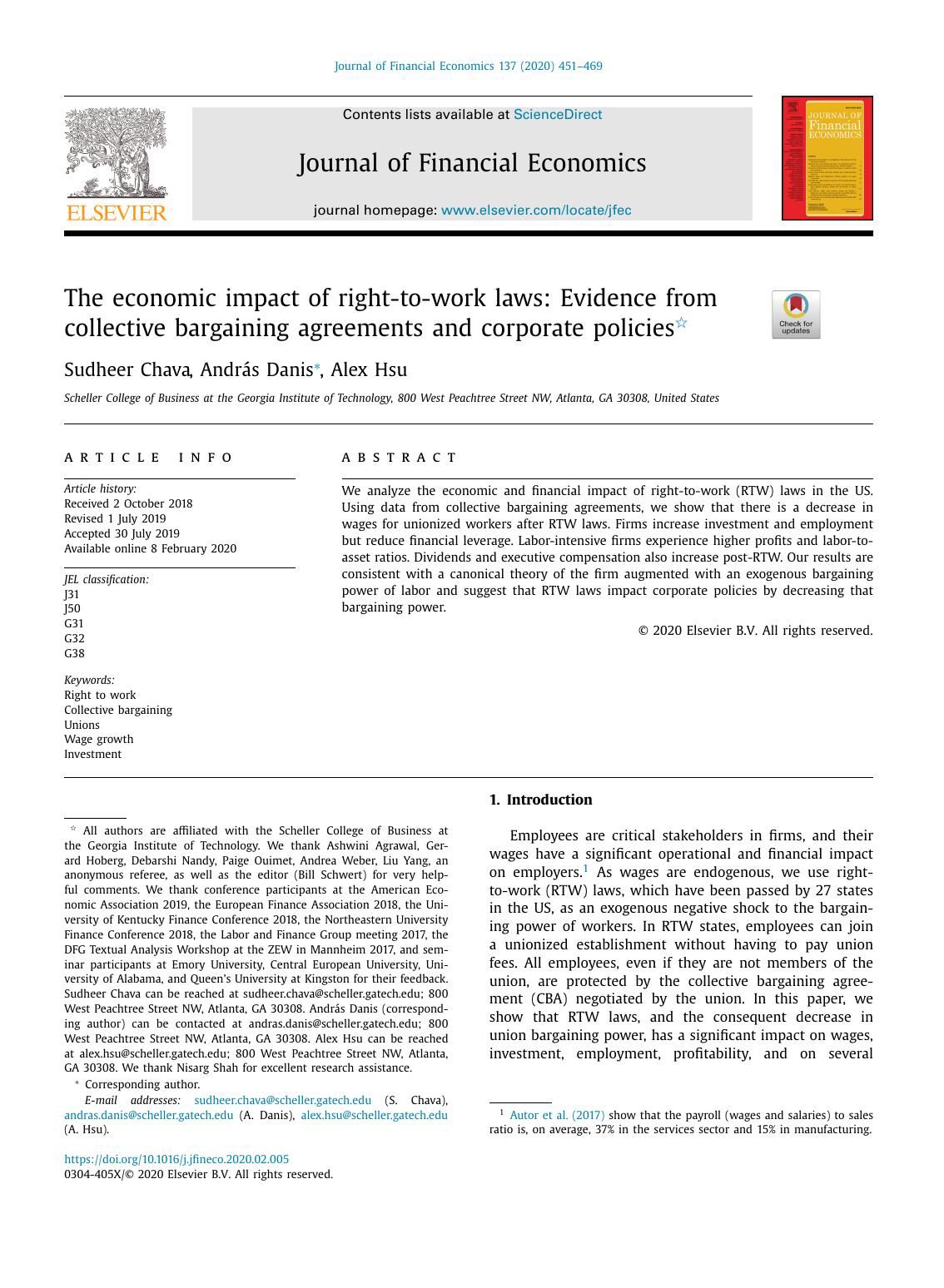 That leads to a decrease in union bargaining power — and a substantial impact on pay.

Right-to-work laws reduced nominal wages — those that aren't adjusted for inflation — by about 0.6 percent per year during the 1998-2016 study period.

Overall, average annual wage growth during the period was 2.9 percent and average annual inflation was 2.6 percent. That means average U.S. wages have barely tracked above the inflation rate long term. When the decline due to right to work laws is factored in, workers in states where those laws exist lost ground to inflation.

This result is important, the professors say, "because it means that right-to-work laws and, more broadly, the weakening of unions, might have contributed to the overall decline in wage growth in recent decades in a way that is different from existing explanations, such as globalization or automation."

There are a couple of caveats. The number of collective bargaining agreements with wage growth data is relatively small compared to the number of all union contracts that were adopted during the 18-year study period. And the decline in wage growth is specific to unionized workers in states with right-to-work laws.

The first right-to-work laws were passed in 1947. South Carolina hopped on the bandwagon seven years later.

About 47,000 workers in the Palmetto State were members of unions in 2019, according to the U.S. Bureau of Labor Statistics. That's a 14.5 percent drop from the previous year.

All told, union-represented workers made up 2.2 percent of the state’s workforce, the lowest rate in the nation. Neighboring North Carolina finished the year with the second-lowest unionization figure, at 2.3 percent.

The national union membership rate stood at 10.5 percent in 2019, the same as the previous year. It’s the lowest percentage since the bureau started tracking the figures in 1983.

The Georgia Tech study was authored by Sudheer Chava, Andras Danis and Alex Hsu, all with the university's Scheller College of Business.