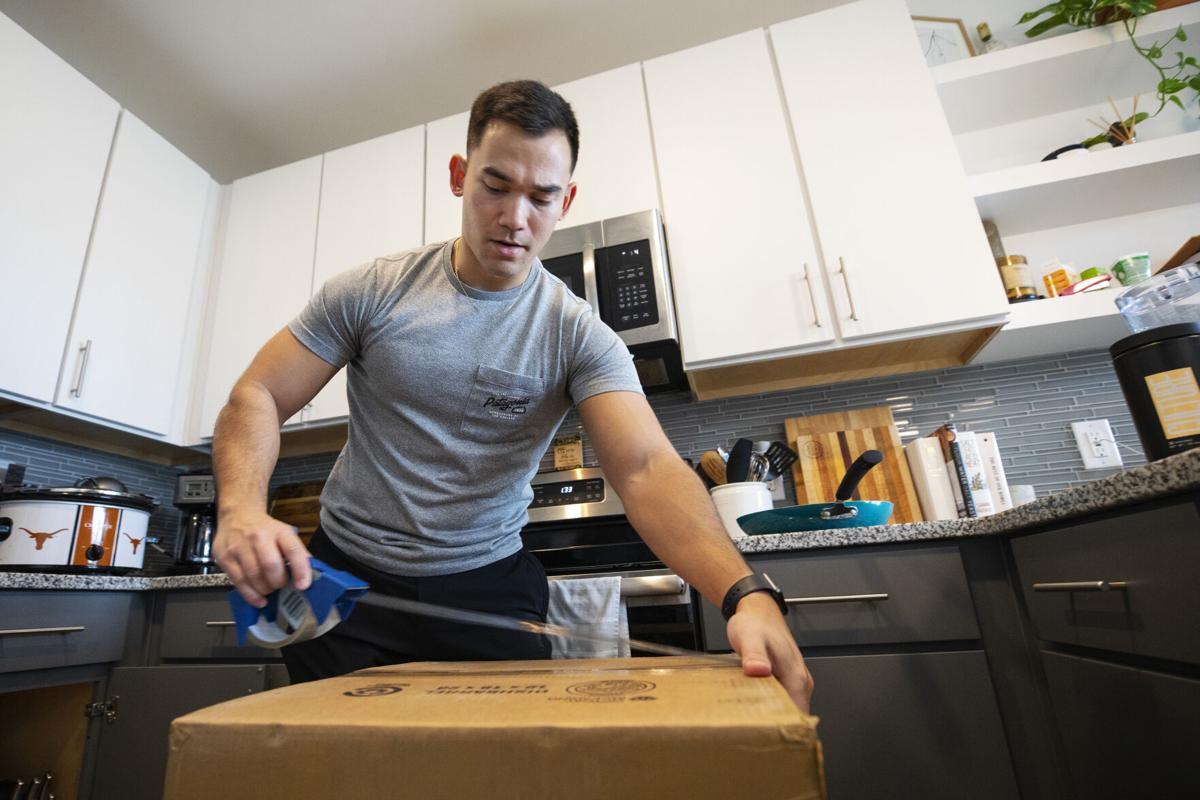 Nicholas Simeon tapes a moving box in his apartment in North Charleston on Tuesday, March 2, 2021. Simeon and his girlfriend are moving back in with their parents in Myrtle Beach to save money to be able to buy a home. Lauren Petracca/Staff 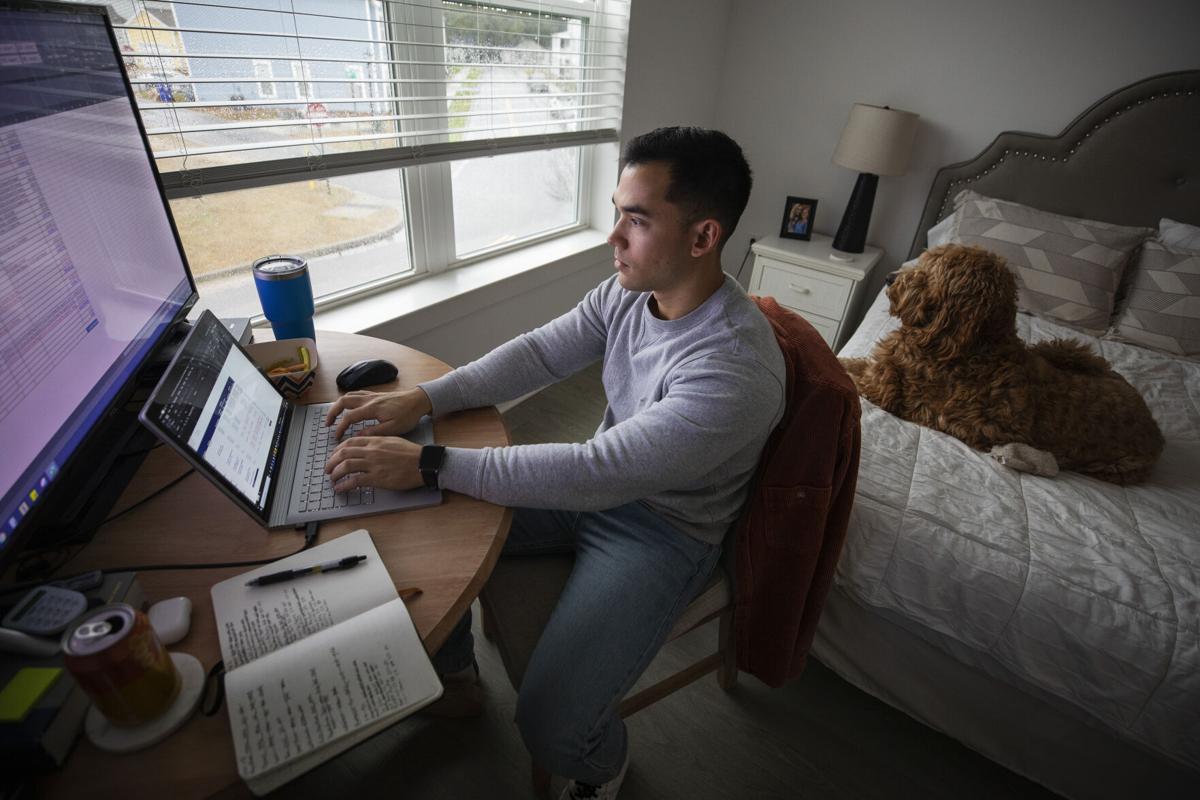 Nicholas Simeon, an accountant for a real estate development company, works remotely from his apartment in North Charleston on Friday, Feb. 19, 2021. Lauren Petracca/Staff 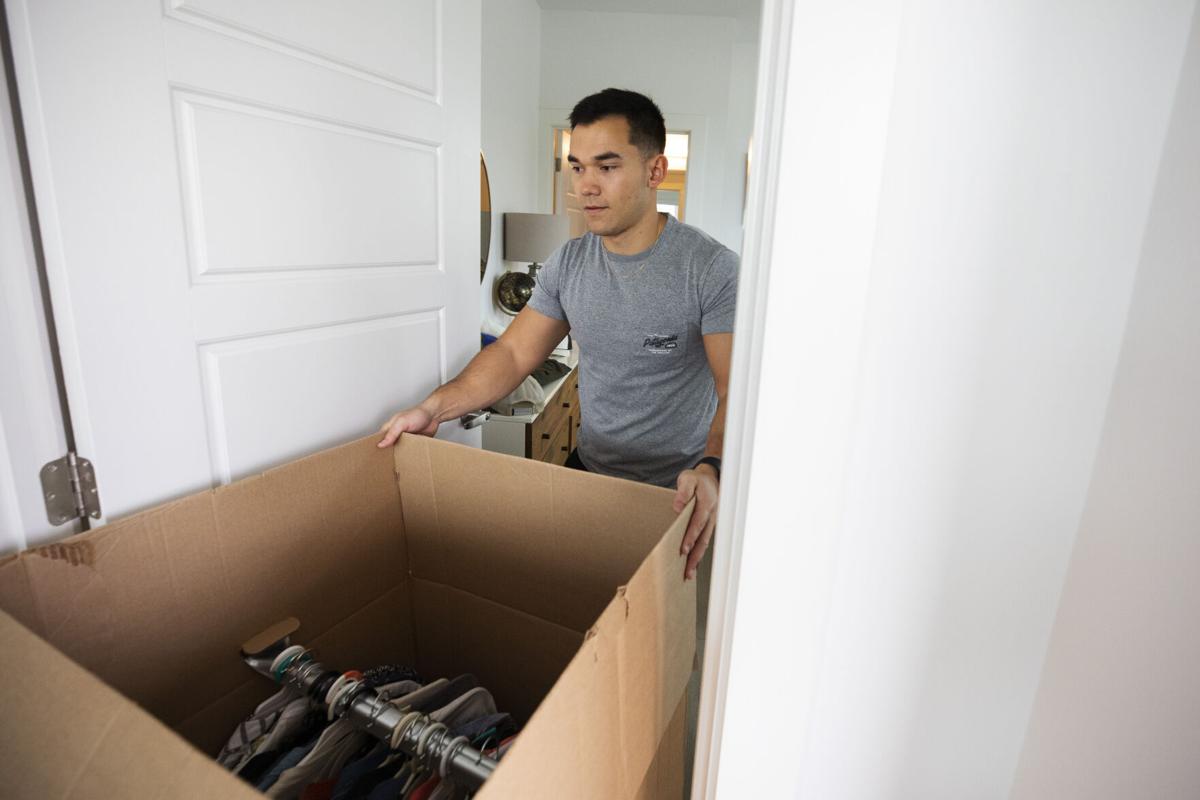 Nicholas Simeon moves a box of clothes out of his bedroom while packing to move from his apartment in North Charleston on Tuesday, March 2, 2021. Simeon and his girlfriend are moving back in with their parents in Myrtle Beach to save money to be able to buy a home. Lauren Petracca/Staff

The housing market in South Carolina broke records even during the coronavirus pandemic, but the growing amount of student loan debt in the state continues to delay and deny some people from becoming homeowners.

The loans that millions of Americans took out to finance their education can make it far more difficult for people to qualify for a mortgage depending on their income and debt load, according to real estate agents and lenders in South Carolina.

That debt can become an even bigger burden in cities like Charleston where saving enough money for a down payment is a monumental challenge with skyrocketing real estate prices and the inflated cost of living.

The rising cost of rent in the Charleston region alone makes it increasingly difficult for people to accumulate enough cash for a down payment on a mortgage, said Owen Tyler, a Charleston-area Realtor with The Cassina Group.

Lumber prices are through the roof, adding $16K to a new home

Add student loans payments into the mix, he said, and it can become a marathon for people to bank the 3 percent to 5 percent down payment that is often needed to even consider buying a house.

“It’s very hard and it’s very difficult to be a first-time homebuyer in Charleston, South Carolina, with or without student debt,” said Tyler, who also served as  president of the South Carolina Association of Realtors.

“But the reality is that student debt drags you down,” he said. “It’s a struggle.”

Nicholas Simeon is one of the thousands of South Carolinians who are dealing with that financial struggle right now. About a year ago, Simeon, a 2014 graduate of the University of South Carolina, began exploring the idea of buying a house in the Charleston region.

By that point, he had already locked down a good job as an accountant in Charleston, earning roughly $70,000 per year. His girlfriend of five years was preparing to finish her law degree at USC, and Simeon was growing tired of pouring $1,600 per month into rent for his apartment in North Charleston.

So after saving up what he could, Simeon met with a lending adviser. He thought he would be able to get his foot in the door to qualify for a mortgage.

But after reviewing the roughly $45,000 in student debt Simeon owes and the size of his down payment, the loan adviser informed him that he didn't have nearly enough saved up.

That was a frustrating realization for Simeon. He felt well positioned in his early career and he was earning far more than the median income for the region. But the loans he took out to fund his education were still serving as a major impediment to homeownership.

"Honestly, it's hard to get a lump sum of principal whenever you are paying a third of your paycheck to student loans," he said. "It sets you back five or 10 years. I'm not saying there is no value in my education, but I'm just saying it seems like such a high price."

That price has since convinced Simeon to move back in with his parents in North Myrtle Beach. The rent on his apartment was set to increase by another $200 per month, he said, and it just didn't make sense anymore for him to continue to pay that price to live in North Charleston while working remotely.

The plan, Simeon said, is to be able to save up enough money while living with his parents in order for him and his girlfriend to speed up their dream of homeownership.

The explosion in student loan debt is one of the biggest changes in personal finances in the country over the past two decades. Student loans are now the largest category of household debt in the United States, outside of mortgages and other housing loans.

There was more than $1.5 trillion in outstanding student loan debt in the United States at the end of 2020, according to the most recent data from the Federal Reserve. That's a 500-percent increase from 2004 when Americans were carrying an estimated $260 billion in education-related loans.

South Carolina is not immune to that trend. The most recent data from the Federal Reserve shows more than 731,000 student loan borrowers in the state owed a combined $26 billion in student loans, and that number continues to rise every year.

The amount of money that individual borrowers owe has also increased in South Carolina in recent years. In 2016, student loan borrowers in the state owed, on average, more than $30,000 in loans. By 2020, that number increased to more than $36,000.

Over the same time period, the median home price in the Charleston area, the state's most expensive real estate market, rose from $240,000 to over $300,000. All of that makes it harder for borrowers laden with student loan debt to navigate their way into homeownership.

Wes Sellew, a mortgage lender with Renasant Bank in Mount Pleasant, said student loan debt is often the first thing he looks for when clients come into his office. The way that student debt is factored into applications for federally backed mortgages, for instance, can go a long way in deciding whether someone can afford to repay a home loan.

"As soon as I see a student loan, my radar goes off," he said. "It's a discussion that we are having all the time."

If student debt in South Carolina and the rest of the country continues to grow at the rate it has in recent years, it could increasingly influence other segments of the economy, said Joey Von Nessen, a research economist with the University of South Carolina.

"The housing market is the most obvious example because that's the biggest single purchase that most Americans make," Von Nessen said. “There’s only a certain amount of debt that an individual can take on and take on responsibly."

One prominent study from the group in 2017 noted how the rate of homeownership in the United States had fallen as the amount of student loan debt in the country continued to increase.

“While this amount of debt has risen, the homeownership rate has fallen, and fallen more steeply among younger generations,” the report said.

That research found that an estimated seven in 10 student loan borrowers said their college debt affected their decision of whether to buy a home or their ability to finance such a purchase. And it noted that many of the would-be homebuyers who find themselves in that situation are forced to put off a property purchase for up to seven years.

That is likely playing into the fact that the average age for first-time homebuyers has increased across the United States in recent years.

The large amount of student loan debt that many people are taking on may also be feeding into existing disparities in homeownership, which is the most common way for Americans to build generational wealth.

That likely contributes to the fact that Black applicants are rejected for mortgage loans at twice the rate that White applicants are, according to the study.

Dorothea Bernique, the executive director of Increasing Hope, a nonprofit in North Charleston, has been providing financial counseling to people for 15 years.

It's absolutely true, she said, that student loans are a huge issue for would-be homebuyers. Even individuals who are able to scrimp and save enough money for a down payment and closing costs can find themselves blocked from homeownership because of the sheer size of their debt, she said.

Bernique, however, encourages people to meet with a mortgage advisor to learn more about their finances, even if they have substantial debt. As a licensed housing counselor, she's encountered many people who just don't have the basic financial literacy to know what steps to take to move themselves toward homeownership.

"There are ways to overcome it," she said. "That's why people like us exist."