Federal authorities accused SCANA Corp. and two of its top executives on Thursday of lying to the public about the V.C. Summer nuclear project, saying it had “repeatedly deceived” investors and regulators by hiding its mounting problems.

The fraud allegations, brought by the U.S. Securities and Exchange Commission and the U.S. Attorney’s Office for South Carolina, mark the first results of a years-long federal investigation into the nuclear project and how its problems were disclosed to investors.

The lawsuit is not a criminal indictment, but the 87-page filing could be a prelude to criminal charges.

Derek Shoemake, a spokesman for the U.S. Attorney's Office of South Carolina, said the office's civil division assisted with the SEC's investigation but added he could not comment on any criminal investigation. 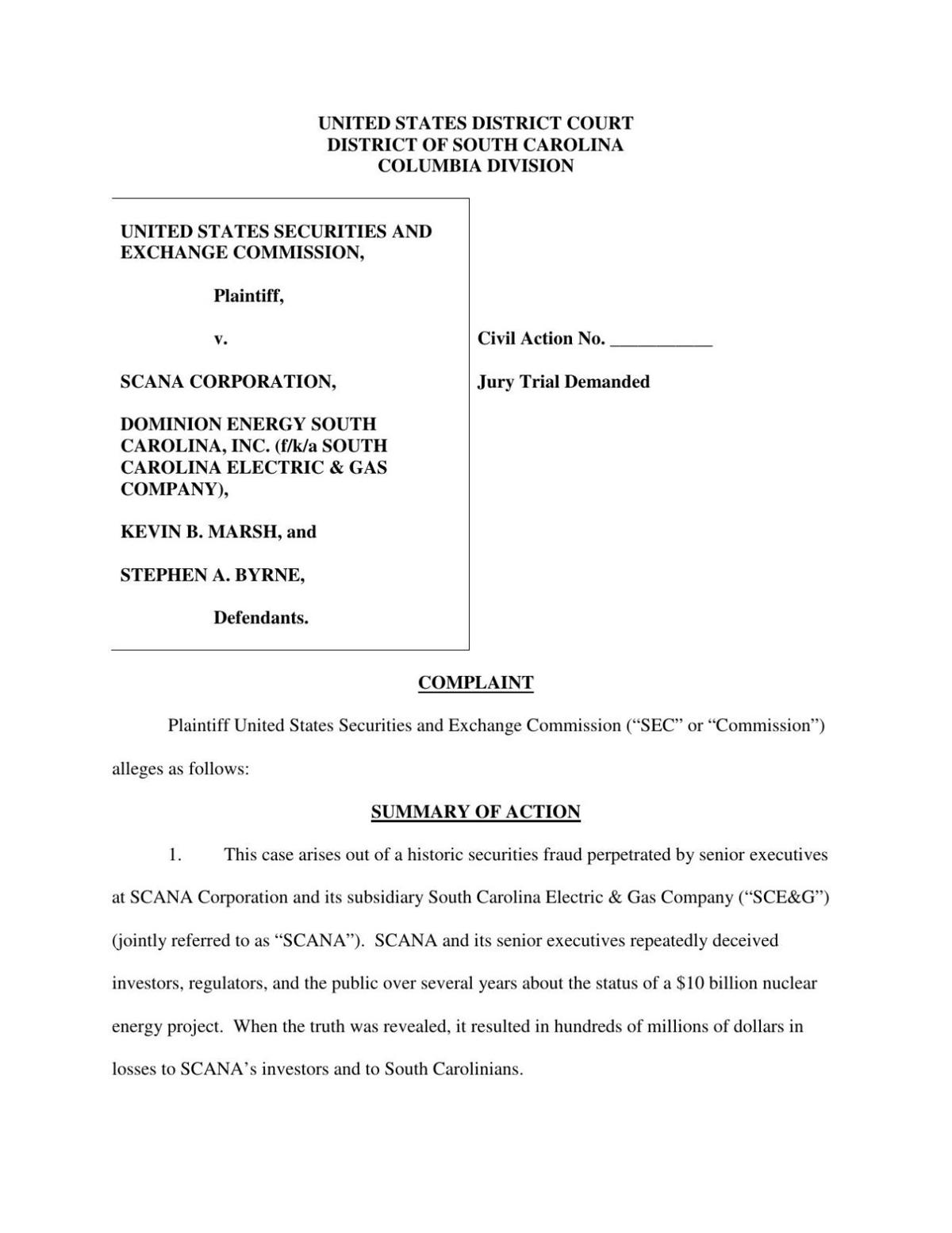 The allegations offer a new glimpse into the split reality of South Carolina's nuclear boondoggle. It depicts how executives privately harbored dire concerns about the biggest project their company had ever undertaken and how they publicly sought to convince regulators and investors that everything was under control.

One executive bluntly summarized the divide in a message obtained by federal investigators: The company's top brass "flew around the country showing the same damn construction pictures ... while the whole (expletive) was going up in flames."

The V.C. Summer project cost more than $9 billion before it was called off in 2017, mired in construction delays and billions of dollars in cost overruns. It's now a financial burden felt heavily by the ratepayers of South Carolina Electric & Gas, which Cayce-based SCANA owned. SCE&G customers are still on the hook for another $2.3 billion for the abandoned reactors over the next two decades even after the utility's sale to Dominion Energy of Virginia.

The project’s demise and revelations about its hidden history of problems caused SCANA Corp.’s stock price to lose billions of dollars in value and led to the company’s takeover by Dominion.

“When the truth was revealed, it resulted in hundreds of millions of dollars in losses to SCANA’s investors and to South Carolinians,” the lawsuit says.

The SEC’s lawsuit was filed against SCANA and Dominion’s electricity business in South Carolina, as well as two of SCANA’s top executives during the project: former CEO Kevin Marsh and former Executive Vice President Steve Byrne.

Both Marsh and Byrne refused to answer questions during recent depositions that were taken as part of another ongoing lawsuit tied to V.C. Summer. Their lawyers said they did not want to incriminate themselves and cited an ongoing criminal investigation by federal prosecutors.

The defense attorney representing Marsh did not return a call seeking comment Thursday. Matthew Martens, a defense attorney for Byrne, said he was reviewing the allegations and would respond in court at the appropriate time.

Dominion, the new owner of SCE&G, said the lawsuit was a "dissapointing development." Dominion Energy has been fully cooperating with the SEC in this investigation... We are taking this matter very seriously, and are reviewing the complaint to determine our next steps," the company added.

The lawsuit seeks unspecified damages from the company and Marsh and Byrne, including bonuses they earned for overseeing the unfinished nuclear plant.

It is unclear how much of that money the SEC seeks to claw back.

The SEC also wants to ban Marsh and Byrne from working for another publicly traded company. Notably absent from the allegations was Jimmy Addison, who served as SCANA’s chief financial officer during much of the project.

The SEC alleges that behind closed doors, Marsh and Byrne knew the true picture of the nuclear project — that SCANA didn’t trust the company building its reactors or its ability to finish them on time.

And it says the executives painted a rosier picture for the public, assuring investors and regulators that things were coming together just fine.

One member of SCANA’s nuclear team said V.C. Summer had become “a tale of two projects,” according to the SEC. Federal authorities say the company used the positive story it spun for the public to convince investors to lend it $1 billion and drive up its stock price.

One internal message cited by the SEC offered a glimpse into the split between the image SCANA projected publicly and the dire picture it saw internally. An unnamed executive wrote that SCANA’s leaders “got on our jet airplanes and flew around the country showing the same damn construction pictures from different angles and played our fiddles while the whole (expletive) was going up in flames.”

The two pictures came together at the same time.

SCANA employees told top management in April 2015, for instance, that they had “no confidence” in the project’s schedule and they felt their contractor had “no credibility.” Two days later, Byrne touted the schedule to investors, the SEC says. Within weeks, he was telling South Carolina’s utility regulators that the schedule was the best estimate he had.

The next year, Byrne gave a presentation in which he told his colleagues that the reactors were coming together so slowly that the construction schedule had become unreliable. But within days, he told investors that he didn’t foresee any problems with the schedule.

Other members of the SCANA team, however, were more hesitant about the information they provided to investors.

The SEC and the federal prosecutors obtained meeting notes written by Marsh. They show, according to the lawsuit, that one unnamed SCANA employee openly stated that she “did not want to be involved in any of the SEC reporting activities because she was scared of (SCANA’s) disclosures.”

A large portion of the SEC’s allegations focus on an audit of the project conducted by Bechtel Corp., one of the world’s largest construction and engineering firms. Bechtel was paid $1 million to study the project by SCANA and Santee Cooper, which owned 45 percent of the reactors.

The Post and Courier revealed in 2017 that Bechtel informed SCANA’s executives that the project likely wouldn’t be completed in time to claim billions of dollars in federal tax credits that were set to expire in 2021. The federal incentives were intended to encourage utilities to try building new nuclear reactors, something the U.S. hadn't done in decades.

But after SCANA’s executives were presented with Bechtel’s initial report, they continued to tell investors that both reactors would be finished before that date. The lawsuit alleges that Marsh and Byrne “knew that the new nuclear units would not be completed in time to qualify” for the tax credits.

SCANA fought hard after the abandonment of the nuclear project to keep Bechtel’s work and the company’s reports under wraps. Bechtel’s audit finally burst into public view after Gov. Henry McMaster forced Santee Cooper to release the document.

The audit highlighted a litany of construction, engineering, procurement and oversight problems at the construction site in Fairfield County, which was supposed usher in a new era of nuclear energy in the U.S. When the audit was released, the public learned for the first time that the project was in trouble long before the two utilities pulled the plug on construction.

The new lawsuit says SCANA “went to great lengths” to hide Bechtel's findings and the true status of the project from the public, state utility regulators and the investment community.

The SEC alleges Marsh also tried to delay Bechtel’s final report and when it was finished he instructed Bechtel to send it to SCANA’s attorney.

The attorney instructed Bechtel to scrub key portions of the audit, including sections that questioned whether SCANA would finish the project on time to qualify for the all-important federal tax credits, according to the SEC. It also allegedly stripped the report of some of the findings that faulted SCANA for a lack of oversight over its primary contractor Westinghouse Electric.

The Bechtel report’s findings ultimately came to pass: The nuclear project fell years behind schedule, and it did not come close to earning the tax credits. The project’s deep problems ultimately swamped it.

The SEC’s lawsuit suggests that the reality set in for SCANA’s executives, too. At the end of 2016, during a call with Westinghouse, Marsh acknowledged in his notes: “Schedules unrealistic.”

At a meeting a week later, at the start of 2017, Westinghouse wouldn’t commit to speeding up its work enough to meet the deadline for tax credits.

Marsh allegedly asked: “How did we get here?”