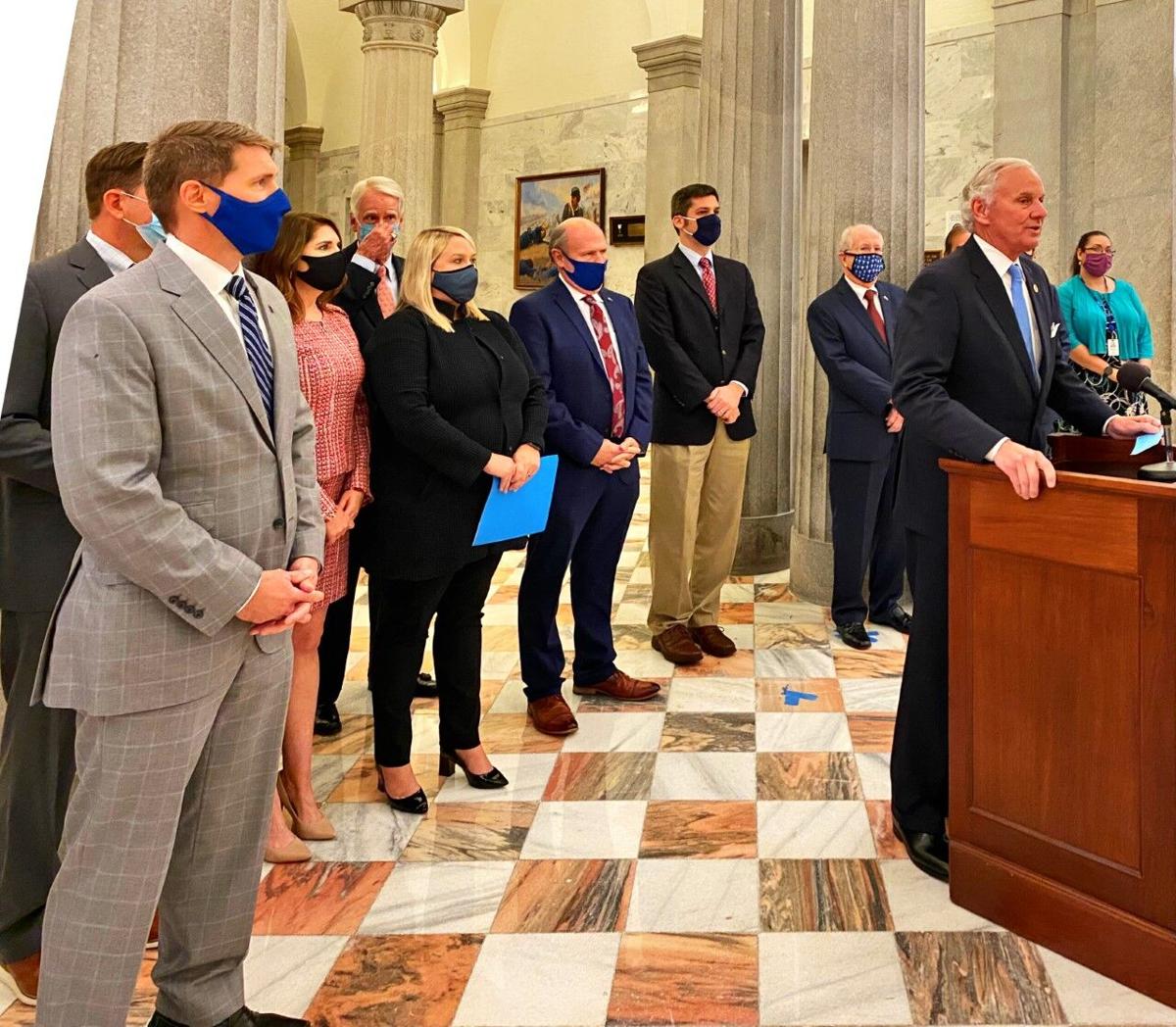 Gov. Henry McMaster announces most businesses in South Carolina will not see their unemployment taxes increase next year as a result of $920 million the state received from the federal government. Staff/Jamie Lovegrove 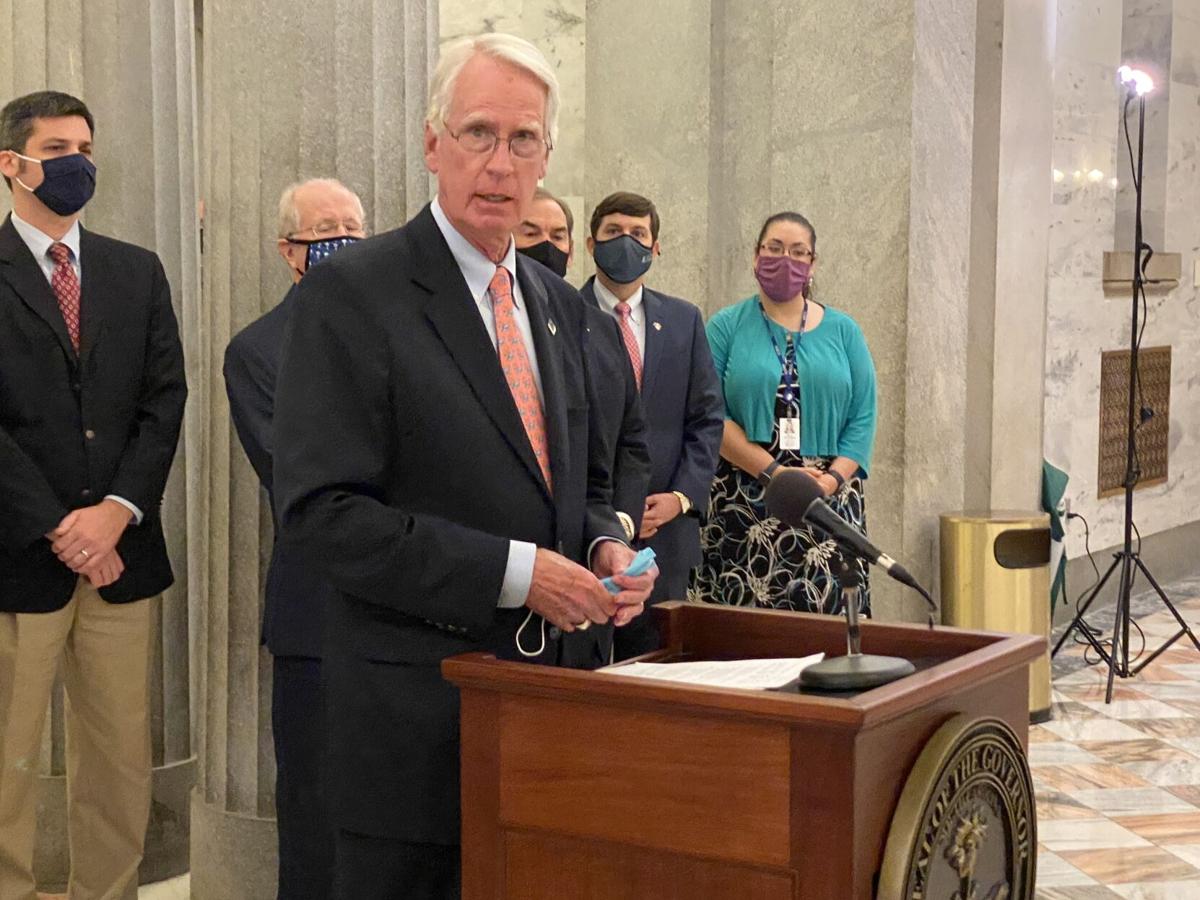 Dan Ellzey, the Director of the S.C. Department of Employment and Workforce, announces that unemployment taxes will not increase for most businesses in South Carolina in 2021. Staff/Jamie Lovegrove

Gov. Henry McMaster announces most businesses in South Carolina will not see their unemployment taxes increase next year as a result of $920 million the state received from the federal government. Staff/Jamie Lovegrove

Dan Ellzey, the Director of the S.C. Department of Employment and Workforce, announces that unemployment taxes will not increase for most businesses in South Carolina in 2021. Staff/Jamie Lovegrove

Unemployment taxes for most South Carolina employers won't increase during the upcoming year, even as the state continues to assist tens of thousands of workers who lost their jobs during the coronavirus pandemic, Gov. Henry McMaster announced Thursday.

He was referring to the money that companies pay each quarter into a insurance trust fund that provide jobless benefits to dislocated employees.

That fund has been under immense financial pressure since March and April, when the first case of COVID-19 was detected in South Carolina and state leaders temporarily implemented emergency orders to limit the spread of the virus.

Figures from the S.C. Department of Employment and Workforce show the amount of money in the account included roughly $1.1 billion before the pandemic and corresponding recession set in. That put South Carolina in a better position than many other states as the country entered the pandemic this spring.

Even so, the historic surge in unemployment claims this year has drained those reserves.

SC's unemployment claims dropped below 200,000 for the first time since April

More than $1 billion has been paid out of the trust fund since March to help provide emergency financial aid to cooks, waitresses, hotel maids, nurses, hairdressers, electricians and factory workers who were laid off during the public health crisis.

The only reason the  fund isn't close to running out of money is because of the financial assistance the federal government provided to South Carolina earlier this year. Congress passed an emergency relief bill in the spring. The coronavirus rescue package sent roughly $1.9 billion for the Palmetto State.

McMaster and lawmakers in the General Assembly then used those funds to pump $920 million into the trust fund.

Without that infusion, the fund would be running critically low at this point. And the state likely would have been forced to borrow from the federal government in order to continue providing aid to unemployed workers, as it did in the aftermath of the Great Recession.

Other states are already in that position. According to DEW, at least 21 states have already taken out loans from the federal government to prevent their trust funds from becoming insolvent. And at least one other state is in the process of applying for a loan.

At a news conference Thursday, McMaster said it was a "major accomplishment" that the state avoided borrowing money again to prop up the fund.

McMaster, other Republican lawmakers and the leaders of several state business associations cheered the fact that the vast majority of companies will not see their unemployment taxes increase in 2021.

Dan Ellzey, DEW's director, said the only reason a business would see their unemployment taxes increase over the next year is if the company laid off people prior to March or if it let workers go for a reason that was not related to the coronavirus pandemic.

"This keeps money in the pocket of businesses as they look for additional ways to rebuild, re-open and continue to re-hire," Ellzey said.

The governor's press conference also served as a celebration for McMaster who lauded South Carolina's partial economic recovery since May, which has outpaced some neighboring states.

"We're in a position to accelerate even more and to grow out of this pandemic," McMaster announced in the lobby of the Statehouse.

But the latest economic and public health data shows the state isn't out of trouble just yet.

South Carolina's economy still hasn't recovered all the jobs it lost earlier this year. Nearly 47,000 positions that existed in the state's tourism and hospitality industry last year are still missing. Tens of thousands of workers have dropped out of the labor force in recent months, meaning they are no longer actively seeking employment. And the number of confirmed coronavirus cases in South Carolina is ticking back up again as the virus continues to spread uncontrolled throughout the country.

As for the demand for jobless benefits, DEW is still dealing with far more unemployment claims than it was prior to the pandemic.

More than 50,000 laid-off or furloughed workers were still trying to claim benefits from the fund during the last week in October. And DEW announced Thursday that it paid out more than $7.9 million to those applicants last week.

Those numbers would be even higher if South Carolina didn't cap state unemployment assistance at 20 weeks. The most recent data shows more than 71,000 South Carolinians have already used up all of their state eligibility and have been passed on to federal programs that provide up to an extra 23 weeks of benefits.

Another 55,000 residents are trying to claim benefits through the federal Pandemic Unemployment Assistance program, which Congress set up this year to provide aid to contractors, self-employed individuals and so-called gig-economy workers.

Some of those federal programs, including Pandemic Unemployment Assistance, are set to disappear at the end of the year. That is unless Congress extends those benefits as a part of a new wave of federal stimulus, which may be unlikely following the presidential election.

During Thursday's press conference, Ellzey said people who are running out of unemployment eligibility will need to return to other jobs soon or go without any income.

"We know those programs are coming to an end, and the bottom line is, at some point, people have got to return to work," he said.

Ellzey noted there were 119,000 jobs advertised in South Carolina in October.

That's not enough to put everyone in the state back to work. And even if it was, not all of those advertised jobs are going to be in areas of the state where dislocated workers can get to them, and many of the job postings require training and education many of the unemployed workers don't have.