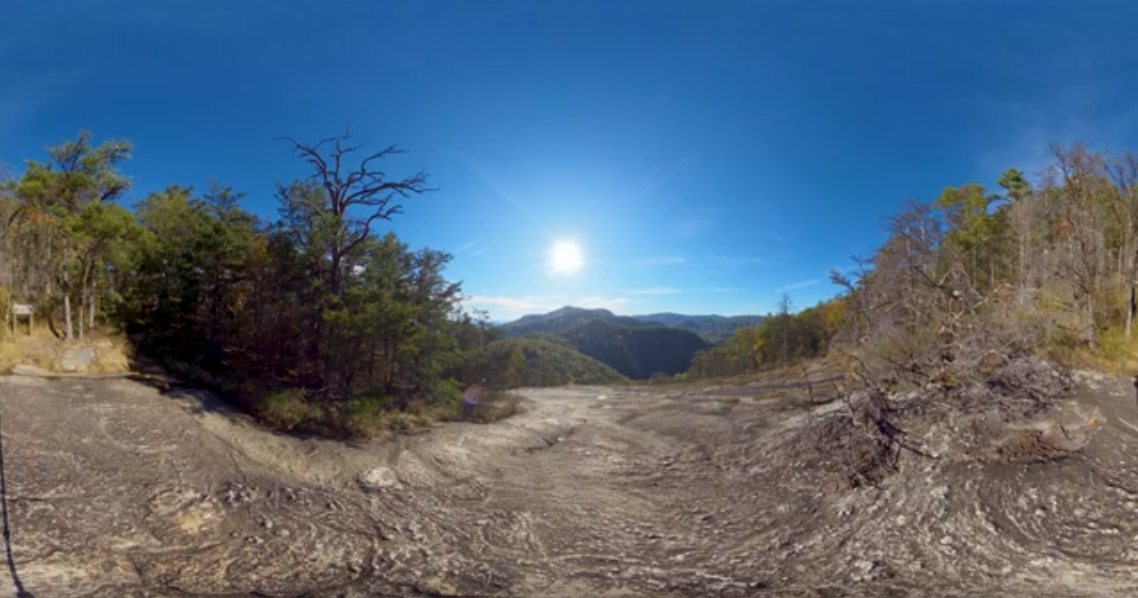 The view from Governor's Rock is one of several vistas people will see during a new virtual reality experience at Table Rock State Park. S.C. Park Service/Provided 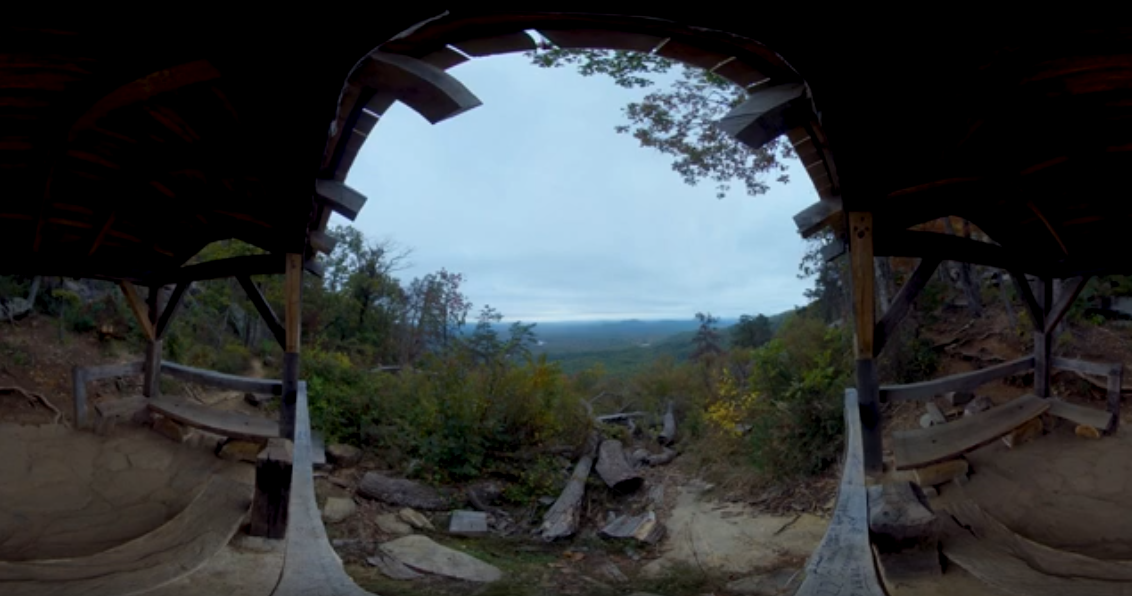 The shelter that marks the halfway point up Table Rock Mountain is one of four views people will see during a new virtual reality experience at Table Rock State Park. S.C. Park Service/Provided 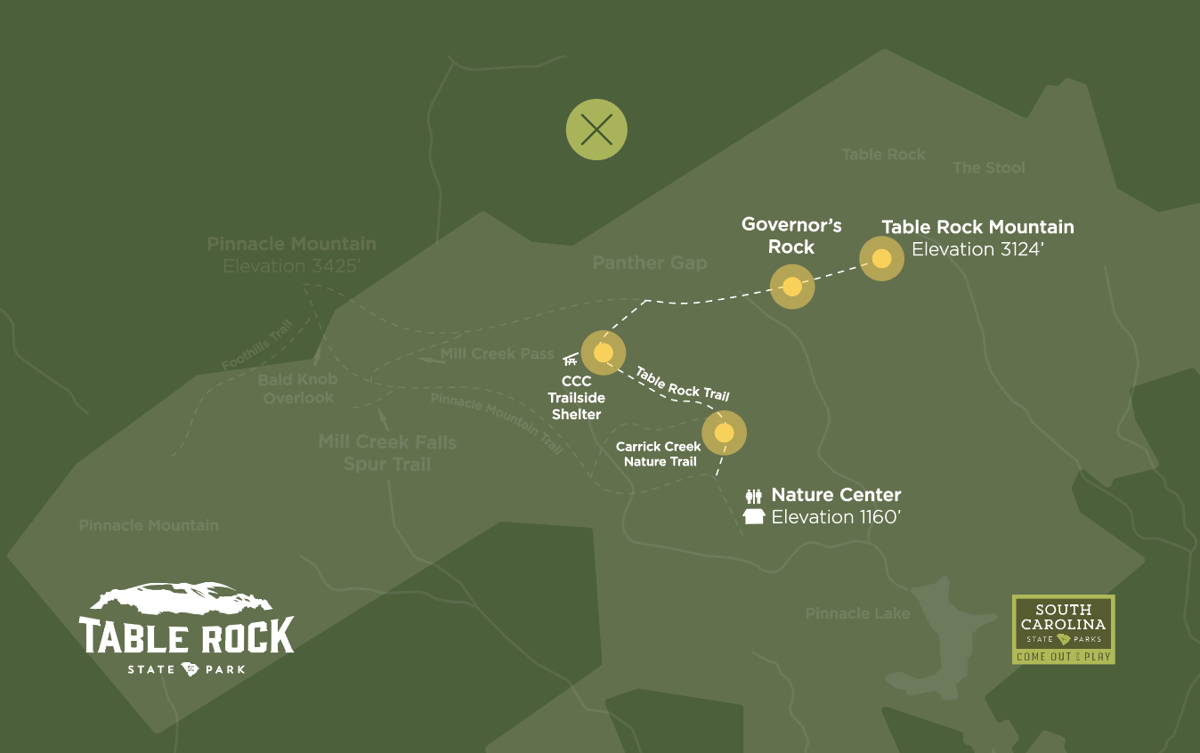 A new virtual reality experience — the first, but likely not the last, of its kind for South Carolina's state parks — will allow people to experience one of the most strenuous hikes in the Upstate from a chair in the visitor center.

The trek to the top of Table Rock Mountain is one that many people can't make because of mobility or health restrictions, said State Park Service Director Paul McCormack. The 3.6-mile trek ascends 2,000 feet to the summit.

The virtual experience takes about five minutes, a fraction compared to the roughly four- to five-hour round trip that McCormack said hikers can expect when actually scaling the mountain.

Four key spots on the trail are featured in the experience: the waterfall at Carrick Creek, a shelter that marks the halfway point, the view from Governor's Rock and the vista from the top of the mountain.

About 40 people tried the experience when it was unveiled Jan. 1. The reactions were "overwhelmingly positive," McCormack said.

The project, which has been in the works for about a year, was prompted by a donation to Table Rock State Park made in memory of Tom Presnell, a Greenville County native who frequently hiked up the mountain. Presnell was also a friend of longtime parks director Phil Gaines and a former artist-in-residence for the State Park Service, McCormack said.

Automaker BMW, which has its largest assembly plant in the Upstate, provided the rest of the funding.

The State Park Service worked with BFG, a marketing agency headquartered in Bluffton, to produce the experience.

It took about 15 hours to film, said Ryan Clark, an account director with BFG. The footage was shot with a spherical camera that includes six individual cameras that capture footage in unison. The footage is stitched together later to create the end product.

Though McCormack said it's become more common for parks to produce 360-degree videos, the use of an immersive virtual experience like Table Rock's is rare.

A 360-degree video allows viewers to move left to right or top to bottom within a set space. But in a virtual reality experience, there are fewer limits. Users are made to feel like they are actually in the place the video has captured, and physical actions control what the user sees.

For example, if someone who is viewing the Table Rock footage through a virtual reality headset looks up, they will see the tree canopy and the sky, just as they would if they were outside on the trail.

McCormack, who has made the trek up Table Rock Mountain multiple times, including as recently as Tuesday, said the virtual take on the summit exceeded his expectations.

"As someone who knows the hike pretty well, I think it does an outstanding job. It makes you feel immersed," McCormack said. "And the benefit is, you're not out of breath when you get there."

McCormack said it's likely they'll bring the technology to more of the state's parks. The virtual experience can serve multiple purposes, he said.

For someone who's scaled Table Rock Mountain before but may not be able to now, the footage can trigger memories. For people who may never be able to make the climb, it makes the experience more accessible. And for those who find the climb is out of their comfort zone, it could motivate them to attempt it in real life.

"We never want it to replace a visit to the parks," McCormack said.

In addition to being one of the most strenuous hikes in South Carolina, the Table Rock Mountain trail is one of the most popular. The park, which has about 12 miles of trails total, is near two mountainous tourism hubs. It's about a 40-minute drive from Greenville and an hour away from Asheville.

There is no charge for the virtual reality experience on top of park admission, which is $6 for adults. Table Rock's staff is working on the details of how and when the headsets will be available to visitors. That information will be posted online soon, McCormack said.

There will be four headsets for the experience at the visitor center. Visitors need to be over the age of 13 and sign a waiver before they can participate. Users are seated for the virtual hike but are in chairs that rotate so they can move around within the experience.