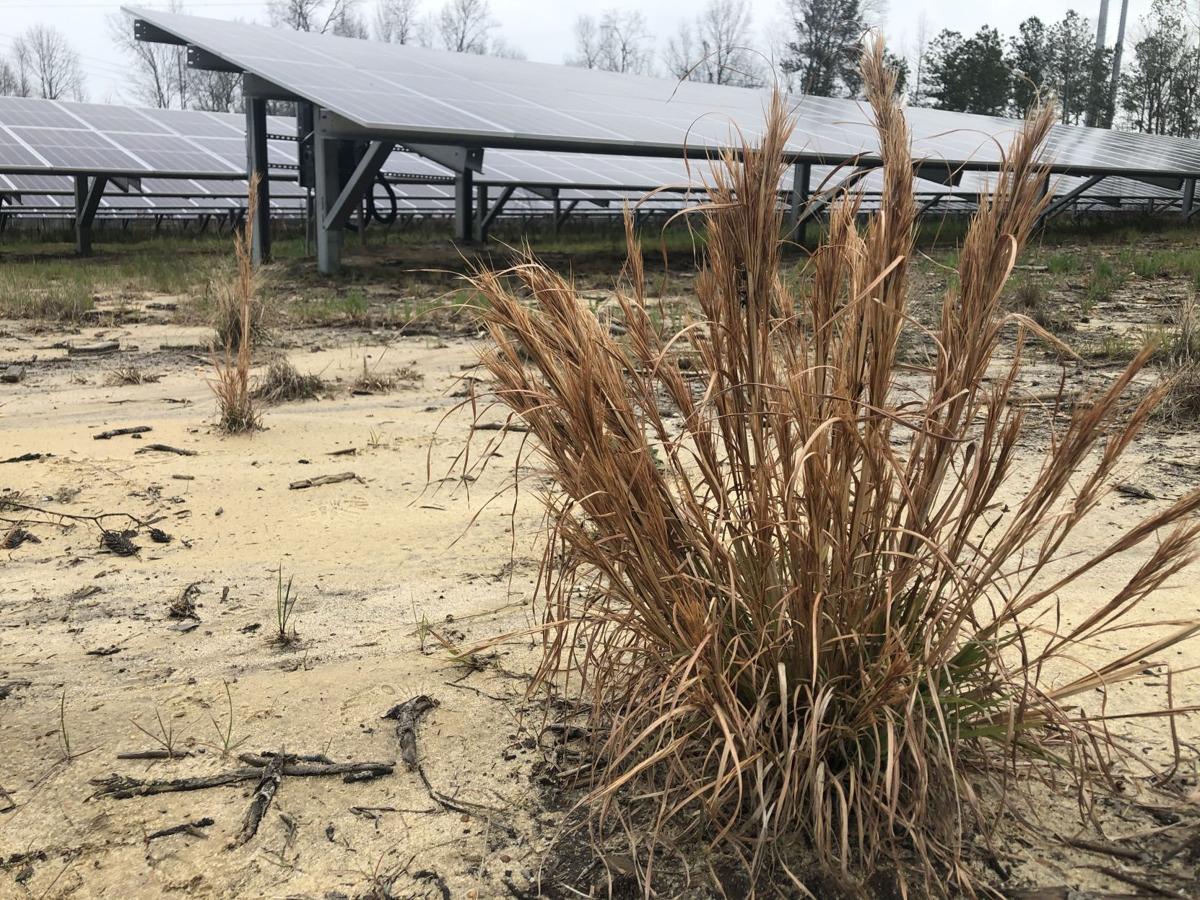 The South Carolina Department of Natural Resources is leading an effort to use new solar farms to expand native habitat in South Carolina. The agency is helping run a pilot program at a solar farm managed by Santee Cooper in Orangeburg County. Andrew Brown/Staff 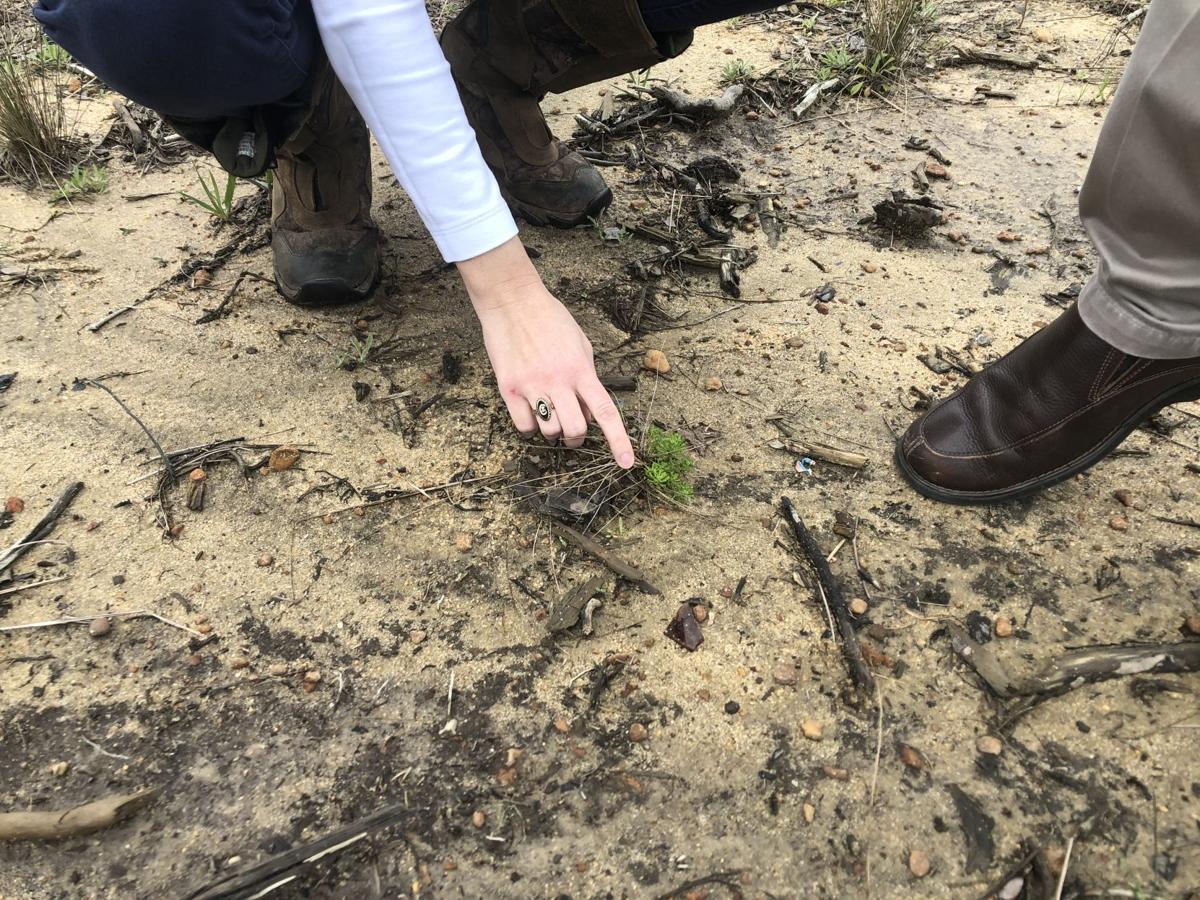 Lorianne Riggin with the South Carolina Department of Natural Resources points to one of the native plants that is being grown at a solar farm in Orangeburg County. Andrew Brown/Staff

A coalition of environmentalists, state employees and agricultural researchers in South Carolina are creating a roadmap for companies to transform the land surrounding new solar farms into habitat for native plants, insects and birds.

The S.C. Department of Natural Resources is leading the new effort to help utilities and independent solar developers utilize the hundreds of acres around large solar arrays to grow native grasses and flowers.

The effort could drastically expand the amount of land available for native species in South Carolina, including pollinating insects that have seen their numbers drop dramatically in recent years.

The push to find a more beneficial use for the land under and around fields of solar panels is new to South Carolina, but it's already taken root in other parts of the country.

Conservation agencies in states like Maryland, Vermont, Minnesota and Virginia already developed guidance for solar builders that are interested in planting native species around solar arrays in those states. And they've created scorecards to grade the various solar sites in their states.

Every energy source has its environmental drawbacks.

Bridgestone and Dominion in dispute over $2.7 million solar project at SC tire factory

Birds and bats can be killed by the blades of wind turbines. Nuclear reactors require radioactive waste to be stored on site. Hydroelectric projects require rivers to be dammed. Gas-fired power plants rely on wells being drilled and pipelines being laid. Coal pumps massive amounts of carbon dioxide into the atmosphere and produces toxic ash that can pollute rivers and groundwater.

And utility-scale solar farms can take up a large amount of land that might otherwise remain undeveloped or used for agricultural purposes.

Lorianne Riggin, who is leading the solar conservation effort for DNR, believes the new guidance her team is developing could limit the ecological cost of new solar projects in South Carolina.

"There's always a balance," said Riggin, the director of DNR's Office of Environmental Programs. "It's an opportunity to make renewable energy even more of a benefit."

The solar habitat plans, which DNR is developing with the help of Audubon South Carolina and Clemson University's Cooperative Extension, come at a time when the state’s solar industry is expanding.

There are roughly 66 utility-scale solar projects currently operating in South Carolina, covering thousands of acres. But those numbers are expected to jump dramatically in the coming years as new solar arrays are finished and brought online.

Data collected by the Solar Energy Industries Association in Washington, D.C., shows roughly 70 more utility-scale solar projects are in the pipeline in South Carolina, waiting to to be permitted and built.

The hope is that some of those solar developers will voluntarily plant native grasses and flowers so that DNR can continue to study how effective the conservation efforts are.

“This is a way that we can promote solar development in South Carolina, while also not losing the habitat," said Matt Johnson, Audubon South Carolina. "You can actually create the habitat and the solar energy, as well.”

Staffers at DNR and the Clemson extension have spent the past year performing a test run at a solar project in Orangeburg County, which was built by Santee Cooper and the Tri-County Electric Cooperative.

The pilot project hit some snags along the way, including a trailer full of native plants being stolen from the site and heavy rain storms washing away some of the seeds that were spread.

But progress was made. Earlier this year, native grasses and flowers could be seen sprouting up around the rows of solar panels just off U.S. Highway 26. Those patches of native vegetation should provide nesting ground for bees in the coming months and seed for other areas on property for next year.

Steve Cole, with the Clemson Extension, hopes the solar habitat plans could provide benefits to the solar builders, too.

There will likely be higher upfront costs associated with planting a solar farm with native species, and it can take several seasons to get native grasses and flowers established. But Cole believes maintenance costs for the solar developers could be lowered in the long run.

“There could be a cost savings there with maintenance if we plant the right kind of plants,” Cole said.

But even if there aren't cost savings, Cole said the habitat plans provide a way for solar developers to showcase their "stewardship and environmental responsibility.”

The biggest hurdle now, according to Riggin, is finding more companies and utilities to adopt the plans DNR has put together. The goal is to get some of the solar projects that are currently in the pipeline to buy into the effort.