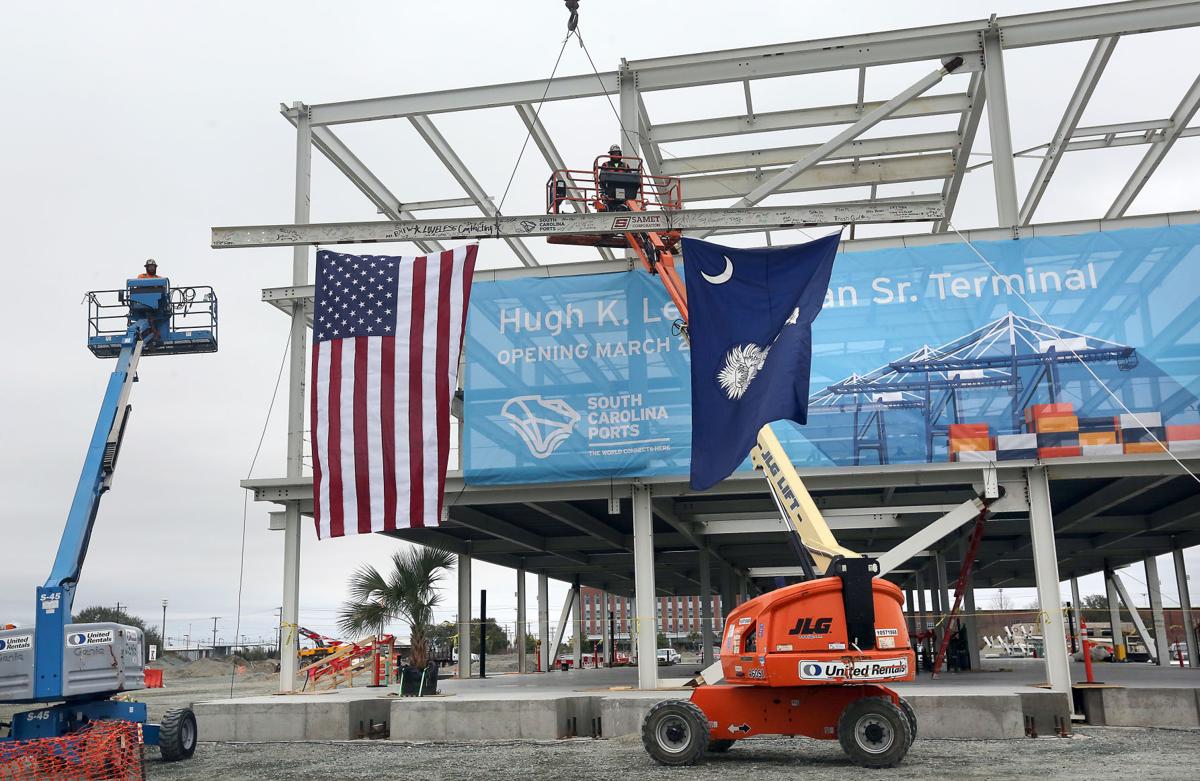 Workers prepare to place the final beam on the operations building at the Hugh K. Leatherman Sr. Terminal during a "topping out" ceremony in North Charleston on Friday. Brad Nettles/Staff 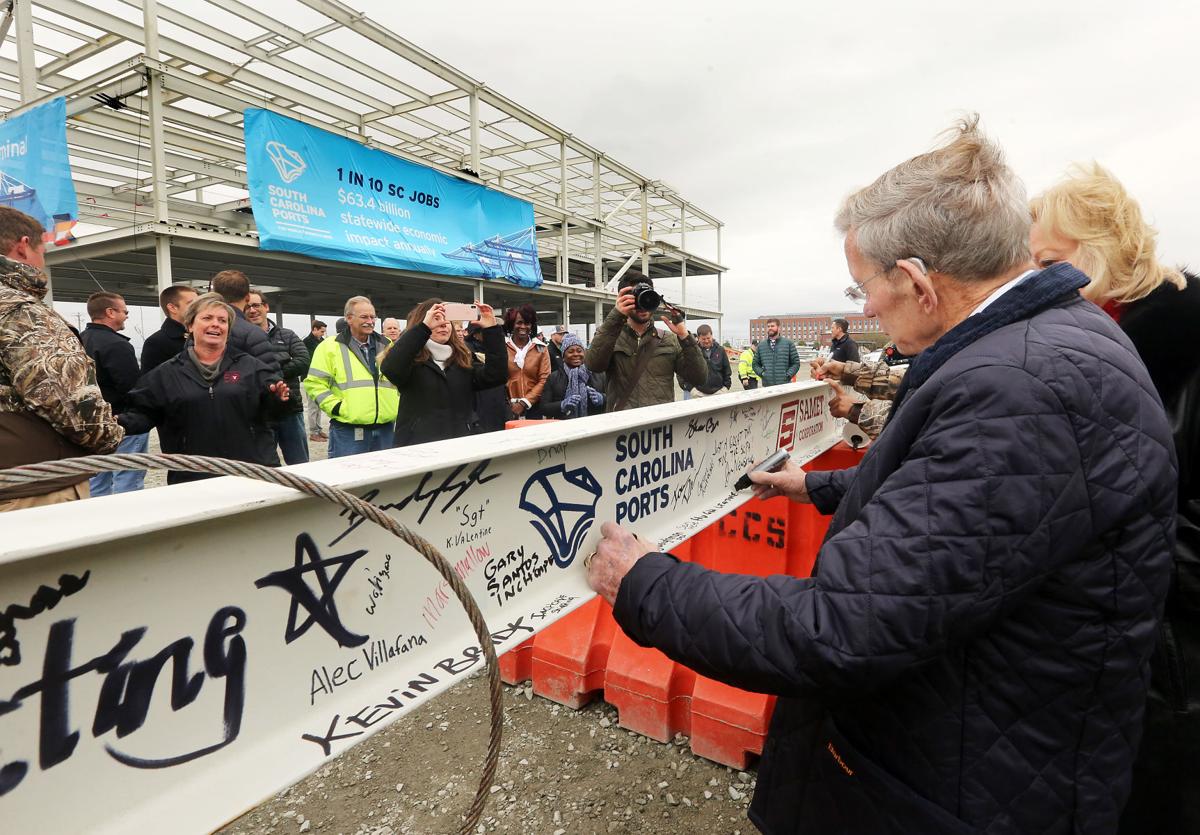 S.C Sen. Hugh Leatherman signs the final beam before the start of a "topping out" ceremony Friday for a new port terminal named for him. Brad Nettles/Staff 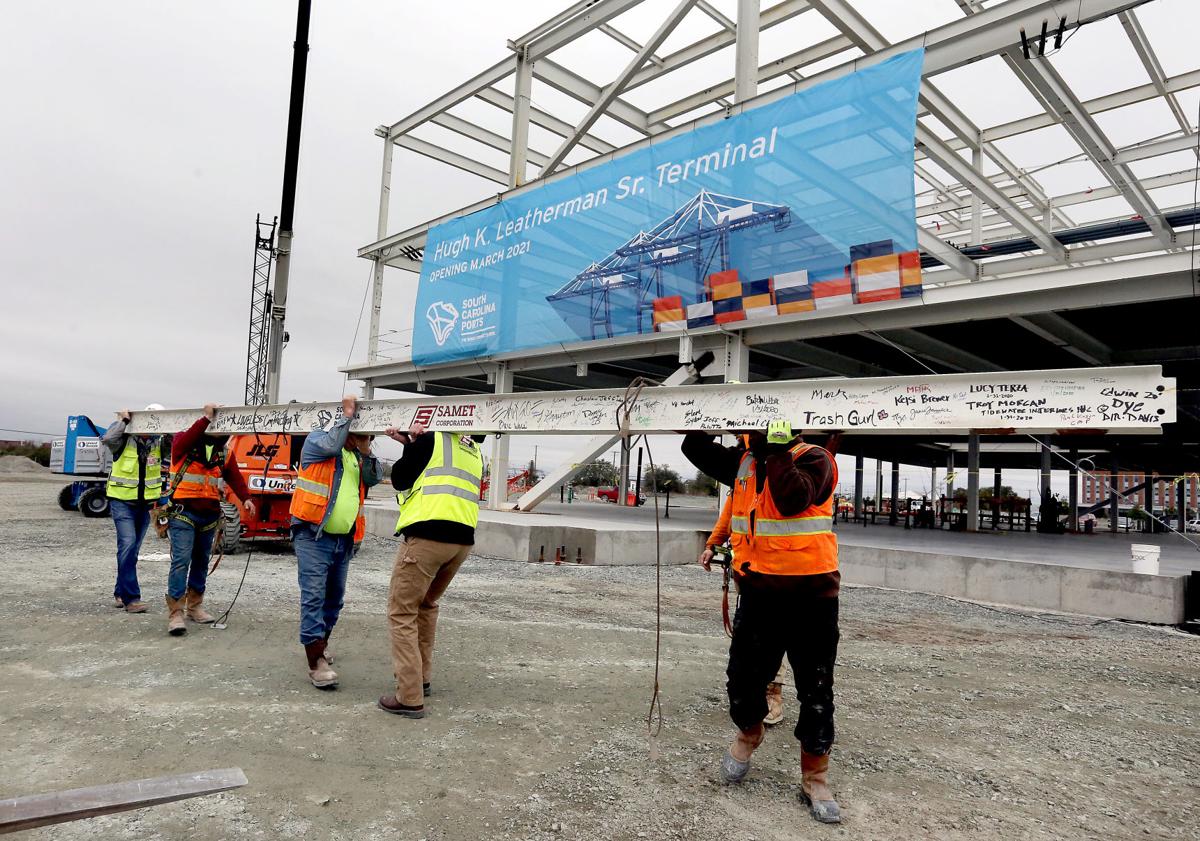 Workers carry the final beam as they prepare to place it on the operations building at the Hugh K. Leatherman Sr. Terminal's "topping out" ceremony in North Charleston on Friday. Brad Nettles/Staff

The first U.S. container terminal to open since 2009 moved closer to completion on Friday with the final steel beam moved into place for the Leatherman Terminal's operations building in North Charleston.

The first phase of the $1 billion terminal at the city's former Navy base is scheduled to open in March 2021, adding another berth for the biggest cargo ships visiting the Port of Charleston.

At full buildout, the terminal will have three berths and the annual capacity for 2.4 million 20-foot containers. That's the same size as the workhorse Wando Welch Terminal in Mount Pleasant and it gives the port enough room to handle expected growth over the next two decades.

"With this terminal, we can say (to customers) we have the capacity to handle your business at world-class speed and world-class cost," Jim Newsome, president and CEO of the State Ports Authority, said during an event to mark the structural completion of the building.

The terminal is named for state Sen. Hugh Leatherman, the Republican chairman of the Senate Finance Committee that has helped the authority get money to deepen Charleston Harbor and build an access road connecting the new terminal to Interstate 26.

"It's not uncommon for public port authorities to need financial support from their state, and at every turn Chairman Leatherman and his colleagues in the Legislature have been there for us," Newsome said. "It's noted around the world that we have that type of support."

Leatherman called the terminal "the newest key to South Carolina's success and growth," adding it will "provide the capacity to grow our economy and provide for our citizens the opportunity they do not have today."

The container terminal will be the first to open since the TraPac Terminal in Jacksonville in January 2009.

The terminal's 134-acre first phase will include a 1,400-foot wharf that can accommodate ships carrying as many as 19,000 containers measured in 20-foot increments.

The facility will include electric and hybrid equipment to reduce emissions as well as five ship-to-shore cranes with 169-foot lift height and 25 rubber-tired gantry cranes, all set to arrive this year.

The 34,853-square-foot operations building at the center of Friday's event, built by Samet Corp., will have offices, meeting spaces, crane operator training areas, a full-service kitchen and the backup power required to keep the terminal running in case of an outage.

The Army Corps of Engineers plans to dredge the Cooper River to the new terminal as part of a $558 million project to dig Charleston Harbor to a 52-foot depth. The deeper waterway will make it easier to accommodate bigger and heavier container ships. But the dredging might not be complete when the Leatherman Terminal opens.

Army Corps spokesman Sean McBride said the agency plans to award a contract for the Leatherman Terminal portion of the dredging project sometime this year, but there is no updated timetable for its completion. Any delay in dredging won't impact the terminal's opening, Newsome said.

The new terminal is needed to accommodate growth at the Port of Charleston, which set a record for containerized cargo in 2019 with 2.4 million containers.

The first U.S. container terminal to open since 2009 moved closer to completion on Friday with the final steel beam moved into place for the L…

Some of the materials used during construction of the first phase of the Leatherman Terminal in North Charleston: