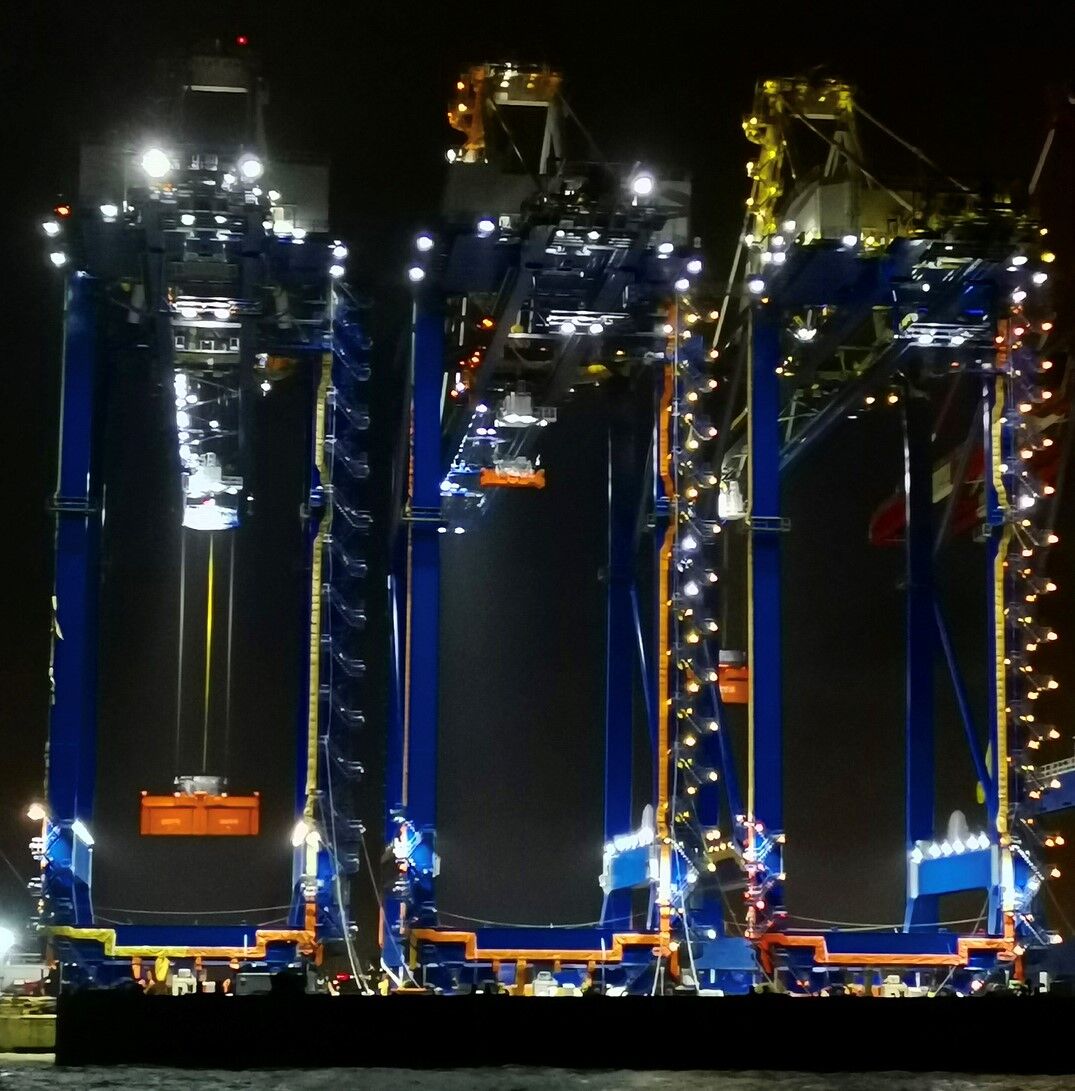 Three of the five ship-to-shore cranes that will move cargo at the first phase of the Leatherman Terminal in North Charleston are undergoing testing in China. The other two cranes are on their way to the Port of Charleston. State Ports Authority/Provided 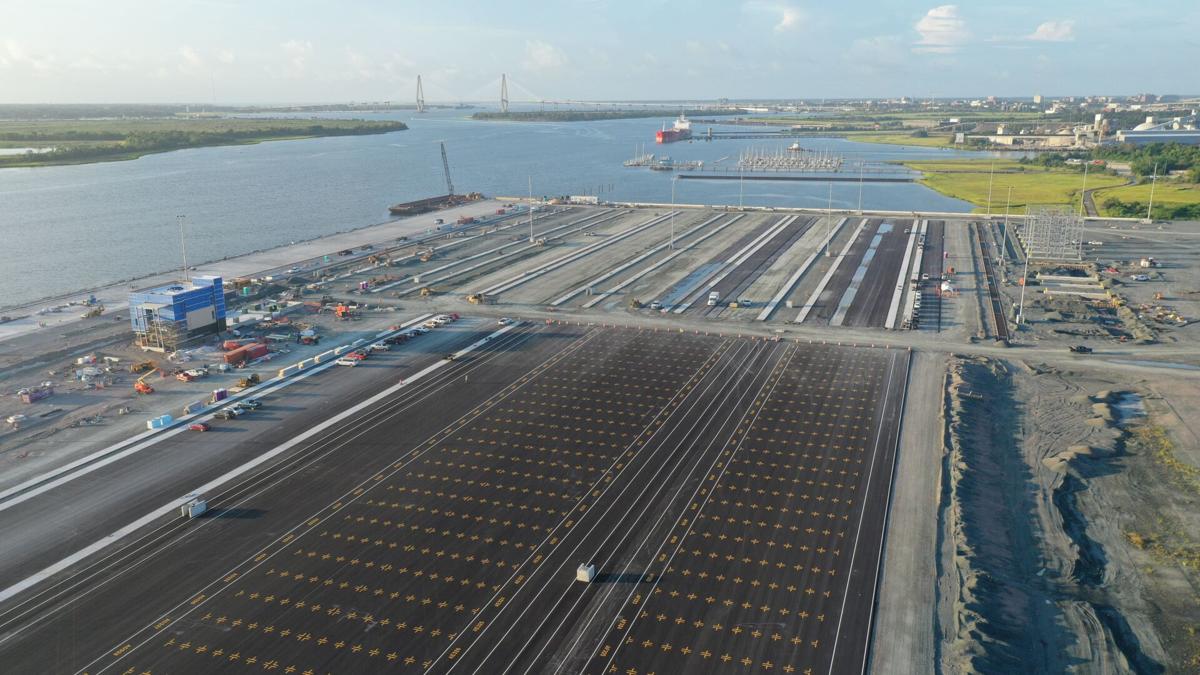 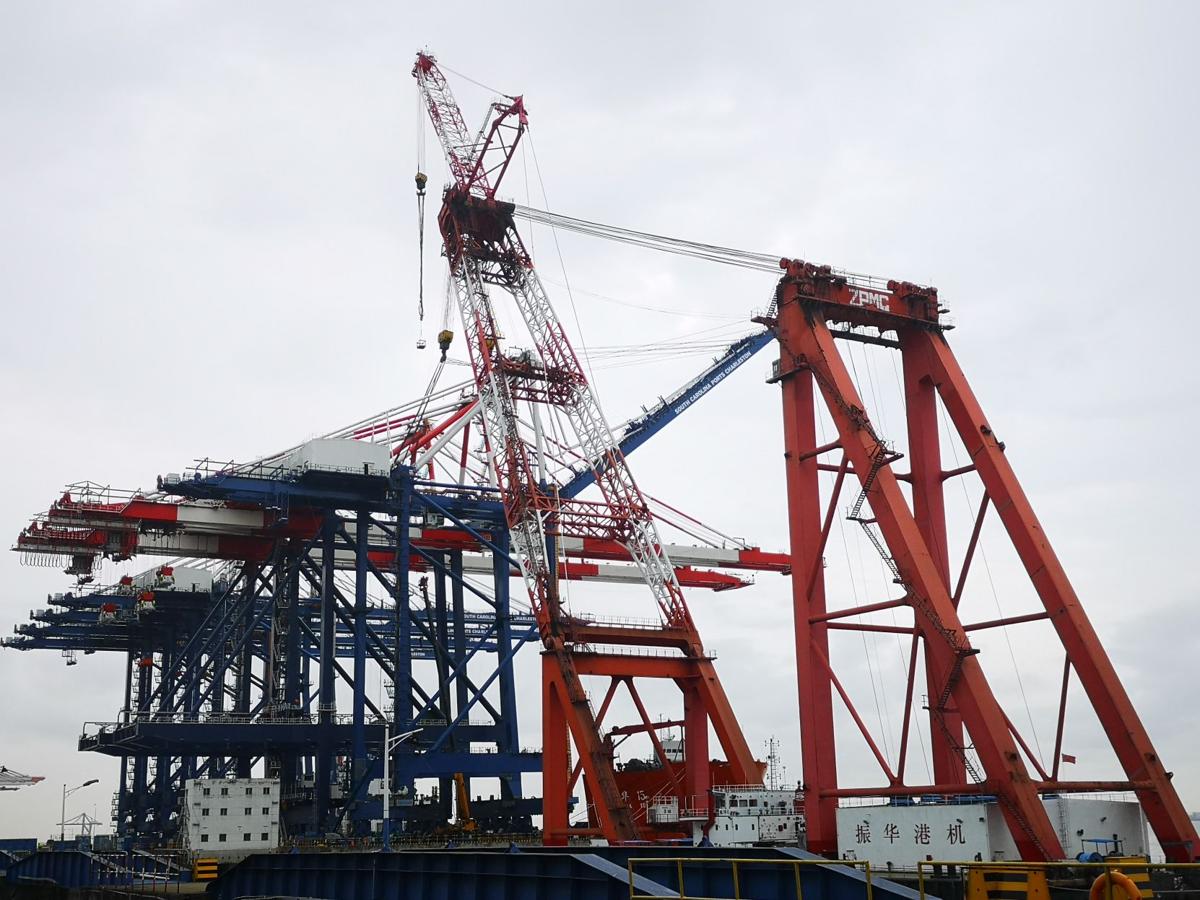 The fifth and final ship-to-shore crane for the first phase of the Leatherman Terminal was raised earlier this year in Shanghai. The first set of cranes will arrive in Charleston in September. File/Provided

More than a decade in the making, the first new container terminal to open at a U.S. seaport since 2009 is on track for a March debut in North Charleston.

The State Ports Authority's future Leatherman Terminal at the city's former Navy base will receive the first two of five ship-to-shore cranes next month for the project's first phase. Three more cranes — all of them with 169 feet of lift height and built by ZPMC in Shanghai, China — will arrive in October.

The authority plans to include a "crane tracker" on its website in coming days so the public can see their progress as they move from Asia to the East Coast.

The first phase of the 286-acre terminal, which is under construction along the Cooper River, will give the Port of Charleston capacity to handle an additional 700,000 cargo containers a year. That includes space for refrigerated containers hauling frozen and chilled goods.

At full build-out, the three-berth terminal will double the port's current capacity of 2.4 million cargo boxes per year, with 3,510 linear feet of berth space. That’s the same size as the Wando Welch Terminal in Mount Pleasant and it gives the port enough room to handle expected growth over the next two decades.

Crews finished the final concrete pour for the main wharf last month and a topping out ceremony for the terminal operations building was held in January with terminal namesake and state Sen. Hugh Leatherman.

"Construction is progressing very well as we remain on schedule," said Barbara Melvin, the authority's chief operating officer. "Our engineering project manager Butch Weber describes the site as a small city, and it is truly remarkable to see it all coming together."

Once the new cranes arrive, ZPMC will assemble and test them ahead of launching operations next spring. The authority has also ordered 25 hybrid-powered rubber-tired gantry cranes, which are scheduled to arrive later this year. Concrete runway beams will allow the cranes to move along rows of containers stacked up to six high.

The 1,400-foot wharf will allow the $1 billion Leatherman Terminal to handle supersized cargo vessels carrying as many as 19,000 shipping containers — the largest that can fit under the Ravenel Bridge.

The terminal operations, vessel operations and other buildings are about 70 percent complete and Dominion Energy has been stringing power lines via helicopter to connect electricity to the terminal's substation.

Work is also progressing on the Port Access Road, which will let trucks travel directly between Interstate 26 and the new terminal without having to drive through neighborhood streets in North Charleston.

"The Leatherman Terminal will enable (the authority) to handle more cargo and bigger ships," said Jim Newsome, the authority's president and CEO. "Businesses depend on us to efficiently move their cargo, and this flow of goods creates more jobs and investment in South Carolina."