A former driver for a Summerville restaurant claims his vehicle expenses should have been reimbursed by his employer, and when they weren't that it violated federal wage laws, in a lawsuit that could ripple through the region's growing food delivery industry.

Donald Nicholas Craven filed the federal complaint against Mad Fish SC LLC, which operates the Mad Fish sushi and hibachi restaurant on Trolley Road. Craven said in documents filed in U.S. District Court in Charleston that he and other drivers had to cover their own work-related gas, maintenance, insurance and other expenses, which caused their pay to fall below minimum wage. 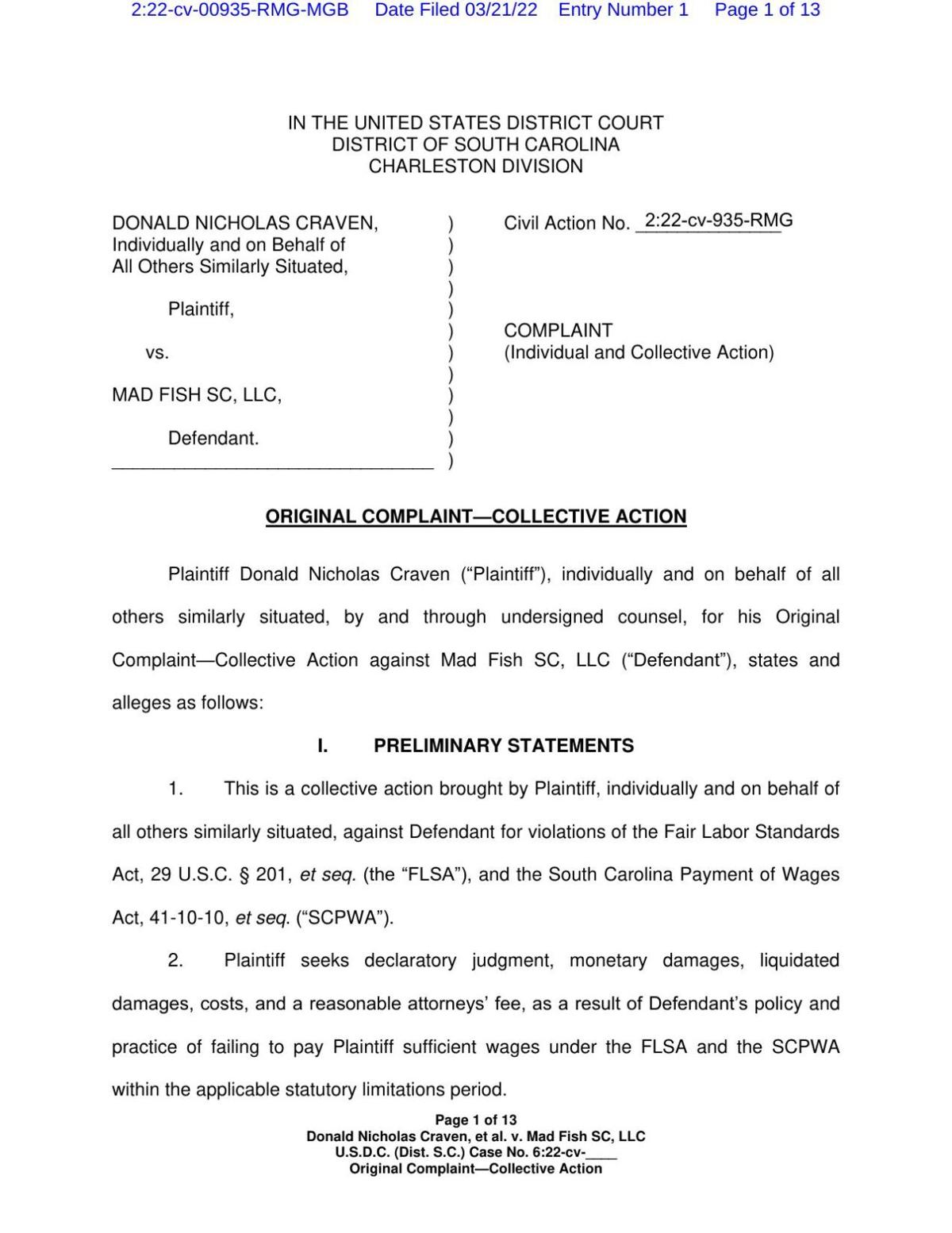 Instead of reimbursing drivers for their expenses or at a mileage rate specified by the Internal Revenue Service, the lawsuit alleged, Mad Fish owner Xin Lin paid them $1 per delivery — an amount Craven said was far below actual costs. And while Mad Fish charged its customers a delivery surcharge, the fee was not passed on to drivers.

"As a result of the automobile and other job-related expenses ... (drivers) were deprived of minimum wages guaranteed to them by the (Fair Labor Standards Act)," the lawsuit alleged.

It added the Mad Fish reimbursement formula of $1 per delivery "has resulted in an unreasonable underestimation of delivery drivers’ automobile expenses ... causing systematic violations of the minimum wage laws."

Craven, who is represented by Rock Hill lawyer Jacob Modla, is seeking back pay, unspecified financial damages and legal fees, and he's asked a judge to approve the lawsuit as a class-action case covering other Mad Fish delivery drivers between 2019 and 2022. 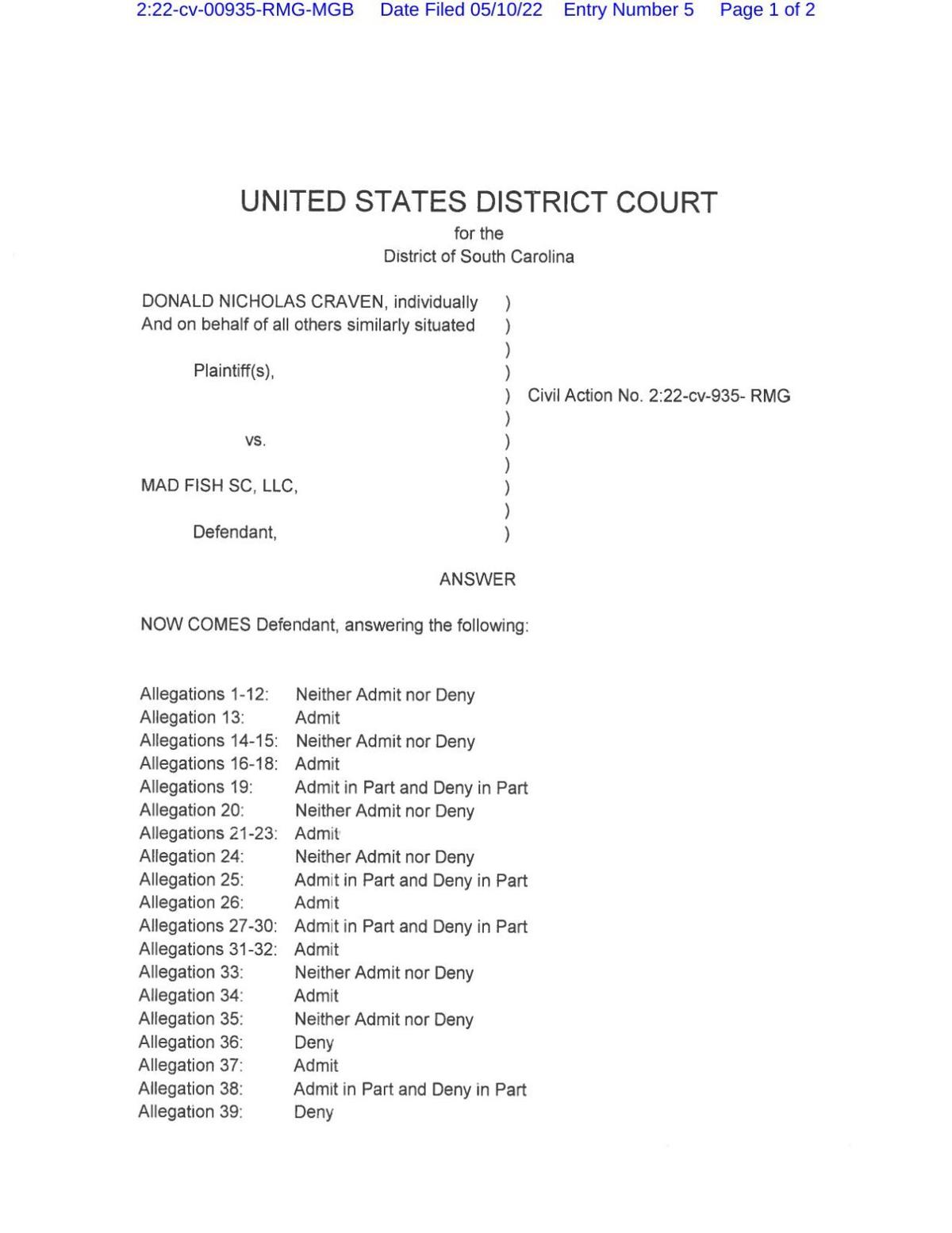 Lin, who planned to represent himself in the case, denied any wrongdoing in a court filing this week. But Magistrate Judge Mary Gordon Baker told the Mad FIsh owner that he must hire an attorney because the lawsuit involves a corporation. The restaurant has until June 30 to file a formal response.

Ultimately, the case could come down to whether a judge thinks the $1 per reimbursement is reasonable, according to the Fisher Phillips law firm, which specializes in labor disputes and is not involved in the Mad Fish complaint.

"Employers are permitted to reimburse employees who use their personal vehicle for work at a 'reasonable approximation of actual expenses incurred,'" according to 2020 guidance from the U.S. Department of Labor, Fisher Phillips said in a blog post. "This means that employers do not need to reimburse employees at the IRS mileage rate to meet their obligations under federal wage and hour laws."

Fisher Phillips said "there has been an influx of litigation" in recent years over how delivery drivers should be reimbursed, and federal courts have been split over the method employers should use to figure their obligation.

"Most federal courts have concluded that employers are not required to reimburse at the IRS rate and that a reasonable approximation of expenses is permissible," the law firm stated, adding the labor department opinion "will likely be relied upon by judges presented with mileage reimbursement litigation."

No court date has been set in the Mad Fish case.

While restaurant delivery services have been around for years, the industry has become highly specialized and competitive, with demand soaring during the COVID-19 pandemic. A recent McKinsey & Co. report shows the global meals-to-go market is now a $150 billion-a-year business, and industry leader DoorDash this month reported 35 percent growth in first-quarter revenue, suggesting the popularity of such services will continue.