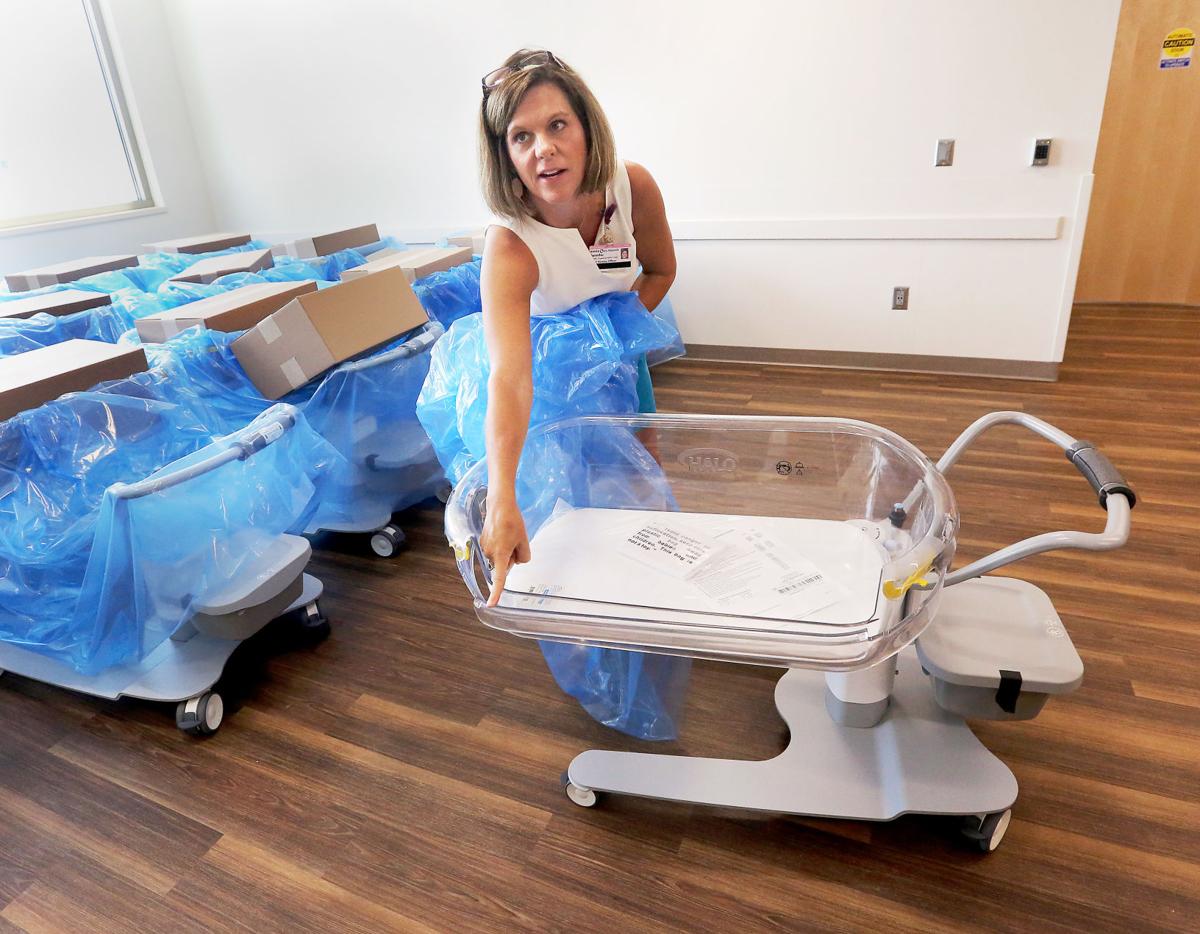 Jennifer Crawford, chief nursing officer at Roper St. Francis Berkeley Hospital, shows a bassinet designed to make it easier for new mothers to get access to their babies during the recovery process. The hospital opens in October. Brad Nettles/Staff 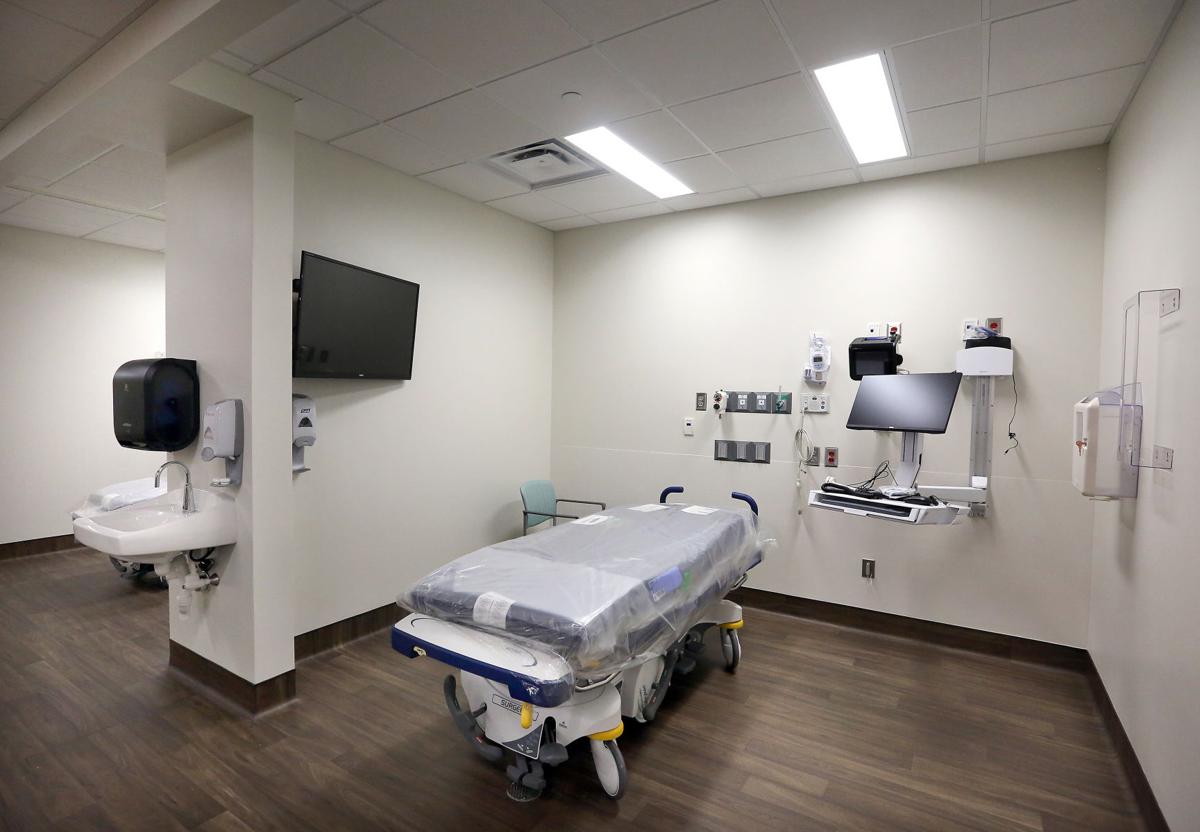 A post-operative recovery bed, still in its wrappings, has found a home at the new Roper St. Francis Berkeley Hospital, which opens in October. Brad Nettles/Staff 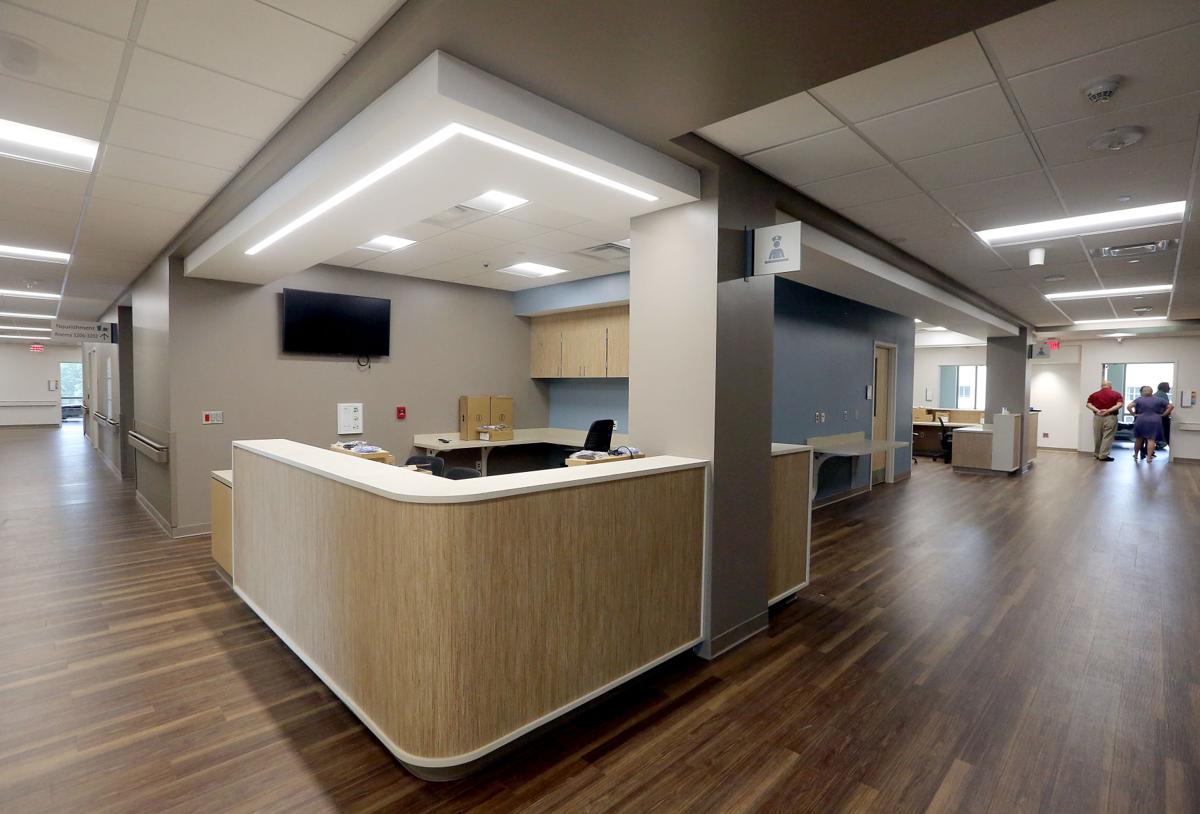 Nurses will be based at this station at the Roper St. Francis Berkeley Hospital come October. Brad Nettles/Staff 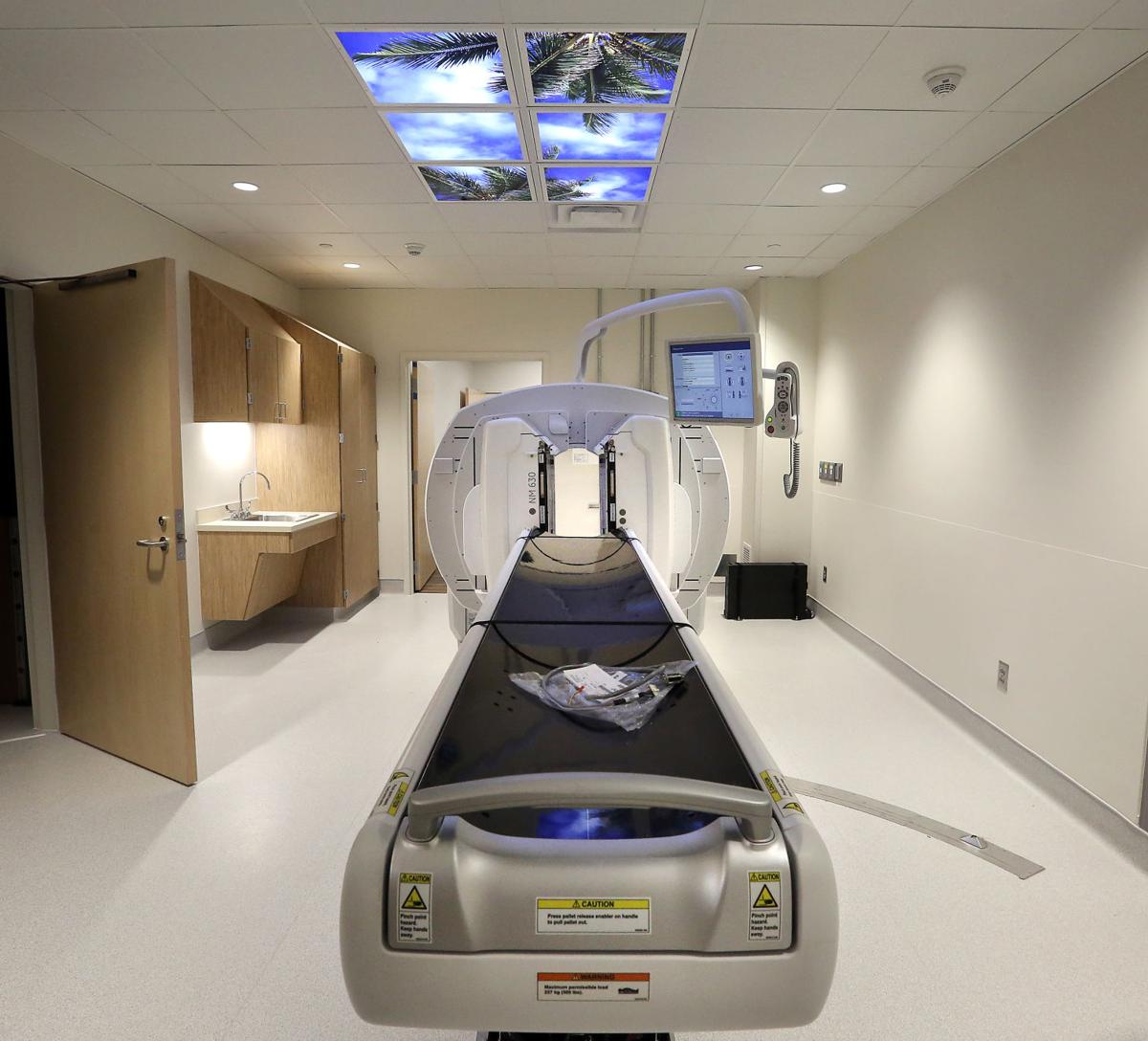 The nuclear medicine room at the new Roper St. Francis Berkeley Hospital has artwork on the ceiling to help patients relax during their procedures. The hospital opens October. Brad Nettles/Staff 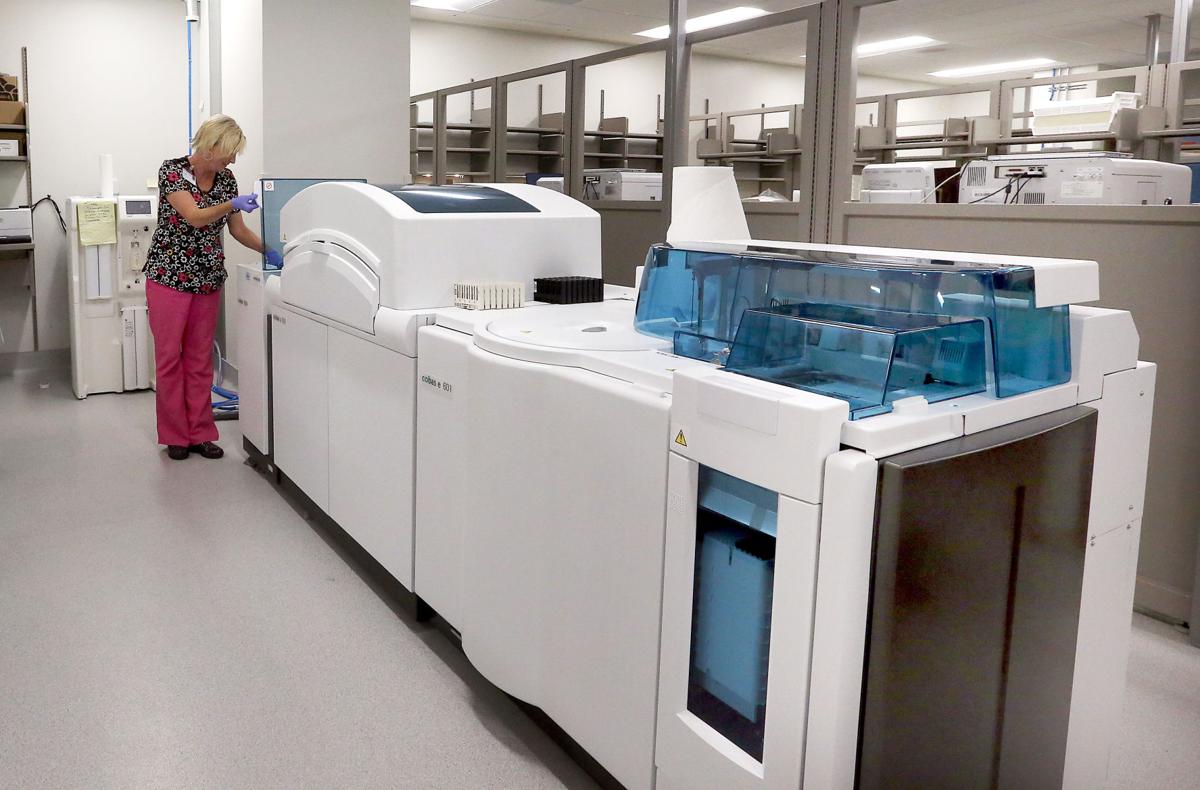 As Roper St. Francis speeds toward the opening of the first full-service hospital in Berkeley County, it is already setting its sights on growing along with the surrounding area.

The private, nonprofit hospital system may be first to open a hospital in the residential hot spot, but it likely won't be alone for long. Other hospital systems have long been eyeing that expanding part of the tri-county area, too.

In the meantime, Roper St. Francis is celebrating. Its $117 million hospital will open in October, after a very long approval process.

The new complex is situated not far from the Carnes Crossroads development in Goose Creek. A medical office building is already open.

Inside, newly delivered furniture is still covered in plastic. Dozens of brand-new Stryker hospital beds are in their wrappings, awaiting patients.

Signs bearing the hospital's name are waiting to be hung. But these are finishing touches.

"Every time we walk by the rooms, there's something new," said April Sellers, a nursing clinical manager at the new hospital.

Sellers is on the team seeing the new hospital through to opening day. She also lives in the area.

It will sport six operating rooms, 16 rooms for mothers and their babies and six intensive care beds, among others, Sellers said.

The hospital is also telemedicine-equipped. It will connect to the virtual stroke network shared by the Medical University of South Carolina and Roper St. Francis, which speeds treatment of strokes and can improve patients' results.

The hospital won't be completely insulated from competition. Trident Health's Summerville Medical Center and Trident Medical Center will both be a 10-mile drive away. The investor-owned provider owned by HCA Corp. also operates a freestanding emergency department in Moncks Corner.

For Roper, the completion of the Berkeley expansion is the culmination of a long saga. News that the hospital system was buying land for the project came in 2007.

Roper leaders announced plans to build a 50-bed hospital on the property in 2008, when the county was home to about 155,000 residents. It was initially expected to be completed by mid-2012.

But a turf war broke out between Roper St. Francis and local rival Trident Health, with both hoping to build in the area. The case was resolved after years of disputes and appeals in 2015, opening the door for Roper to begin work.

Today, around 221,000 residents live in Berkeley County, according to the U.S. Census Bureau.

Jennifer Crawford, chief nursing officer for the new hospital, said the plans were drawn up based on the old population estimates. But Roper is anticipating it will want to add more capabilities as the needs arise.

"The building is built for expansion," Crawford said.

She is in the midst of staffing up Berkeley Hospital. The majority of Roper's hiring needs are in nursing. Training for employees begins in September.

The staff will be a mix of employees who already work for the provider and new hires. Crawford said she has fielded a lot of interest from county residents looking to work closer to home.

Ashley Ramsey, a clinical manager who will be in charge of the intensive care unit, said the value of the new hospital is in part Roper St. Francis' well-known reputation with area residents.

"I'm excited to be part of the opening team and to build it from the ground up," she said.

A few hundred feet separate the hospital and the medical office building today. Roper hasn't laid sod in that area because it's where it plans to construct its next addition to the campus, most likely another medical office building, said spokesman Brian DeRoy. It even left a gap in the addresses: The hospital is at 100 Callen Blvd., while the future structure has been assigned the 300 slot.

The construction signs are still up, but Summerville Medical Center has completed a key piece of $100 million in updates to its Midland Parkwa…

While Roper is first to the finish line Berkeley County, the competition isn't expected to sit on the sidelines long.

Trident Health has stalled on plans to build a full-service hospital in Moncks Corner, but it still has the authorization to move forward. It's also in the throes of a major renovation of its nearby Summerville Medical Center.

Not to be left out of the fray, the Medical University of South Carolina announced plans last year to expand to the area. Its proposed $325 million, 140-bed MUSC Health Community Hospital at Nexton is scheduled to open as early as 2022.

One SC nursing home flagged by government as poor-performing, two more are candidates

A Florence nursing home was designated as a Special Focus Facility, while facilities in Columbia and Myrtle Beach were flagged as potential candidates for the government monitoring program.