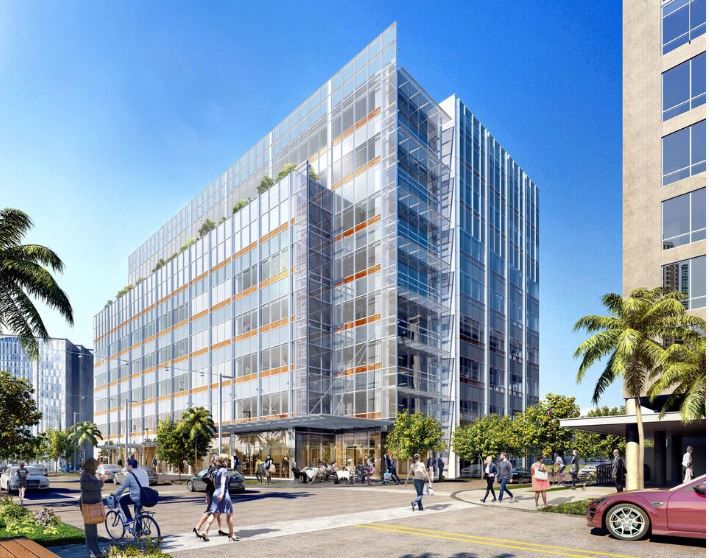 An eight-story office and laboratory building called 22 WestEdge is the next building slated to rise in the WestEdge development on the Charleston peninsula. Rendering/Perkins+Will 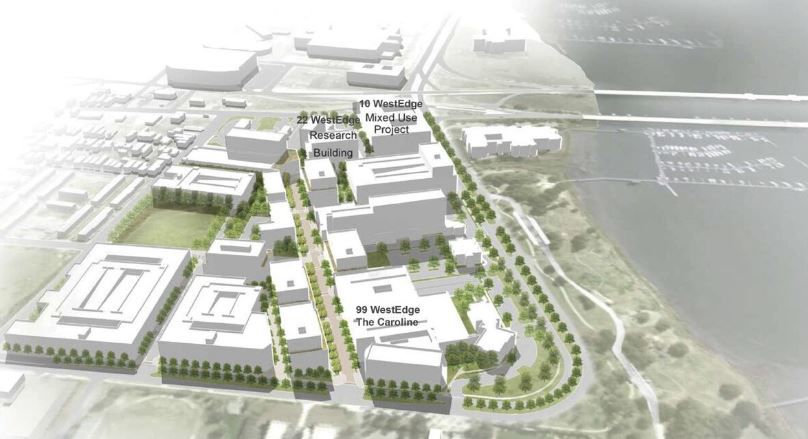 The 60-acre WestEdge development is slated to include several buildings over a multi-year build-out. The next building slated to rise is the 22 WestEdge site. The Caroline, at the bottom of the district concept, opened earlier this year and the 10 WestEdge building at the top center is under development. The city's medical district is at the top, and Brittlebank Park is in the lower right corner. Provided/WestEdge Foundation

The rising WestEdge development on the Charleston peninsula hasn't completed its second multistory structure yet, but it's starting on its third.

Work is under way on an eight-story office and laboratory building, temporarily dubbed 22 WestEdge, beside the nine-story 10 WestEdge project that's well under construction at Spring Street and Lockwood Drive.

The first floor of the all-glass exterior structure will house 15,750 square feet of retail space while the upper floors will provide 138,500 square feet of office space-targeted firms in the so-called knowledge economy, such as the life sciences industry. About half of the site has already been leased.

The new building, at 125 feet, will be the tallest, multi-tenant office structure on the peninsula and in the Charleston region when it opens in November 2019, according to WestEdge officials.

A more formal ground breaking is set for 4:30 p.m. Aug. 2, but the project actually began in June when the contractor filed a notice with Charleston County to begin work on the site.

“22 WestEdge affirms the vision for a live, learn and earn district, adding vital office, research and lab components to the world-class WestEdge community," said Michael Maher, CEO of the WestEdge Foundation, the nonprofit sponsor of the overall project. "It builds on the remarkable momentum of a development that already has over $300 million under construction."

The South Carolina Research Authority will lease the entire top floor — about 16,000 square feet — of the new building.

The space "will allow us to create a world-class facility, including laboratories, which will serve as a catalyst for the attraction of leading life sciences companies and the creation of a Discovery District adjacent to MUSC," said Bob Quinn, SCRA executive director.

Other announced tenants include the Medical University of South Carolina, the City of Charleston, the WestEdge Foundation and Heritage Trust Federal Credit Union.

"It’s no secret that biomedical advances will be a key driver of our economy and society in the years ahead," the mayor said.

Neighboring MUSC is one of several interested parties committed to the 22 WestEdge project.

The new building is rising between the Publix-supermarket-anchored 10 WestEdge structure, the second building in the development, and a 10-story office building the city's Board of Zoning Appeals approved July 17 for a new 250-room hotel. The Holiday Inn Express hotel on Spring Street sits in front of the new building site.

The ground-floor grocery store at 10 WestEdge is slated to open in late October while work will continue on the 350 apartments and 870 parking spaces being built above it.

In January, the first building in the development, the 237-unit apartment and retail site Caroline, opened at Fishburne and WestEdge streets across from Joe Riley Stadium.

Project developer and partner Mack Reese of Gateway Development noted access to nearby parking, shopping and residential opportunities for workers in the new structure.

About 400 spaces have been set aside in the 10 WestEdge building for workers in the new 22 WestEdge project. Those slots will be shared with apartment residents during business hours. Nearby surface parking also be available.

Reese called 22 WestEdge "an exciting option" for existing Charleston businesses and those looking to relocate to the region.

A construction crane at the 10 WestEdge project will be dismantled starting at 10 p.m. Friday, June 20. The work will require the West Ashley-bound lanes of Spring Street to be closed between Hagood Avenue and Lockwood Boulevard until 6 a.m. on Monday, June 23.

The entrance to the Holiday Inn on Spring will remain accessible. Drivers needing to reach Lockwood during the closure will be detoured right onto Hagood and then left onto Fishburne Street.