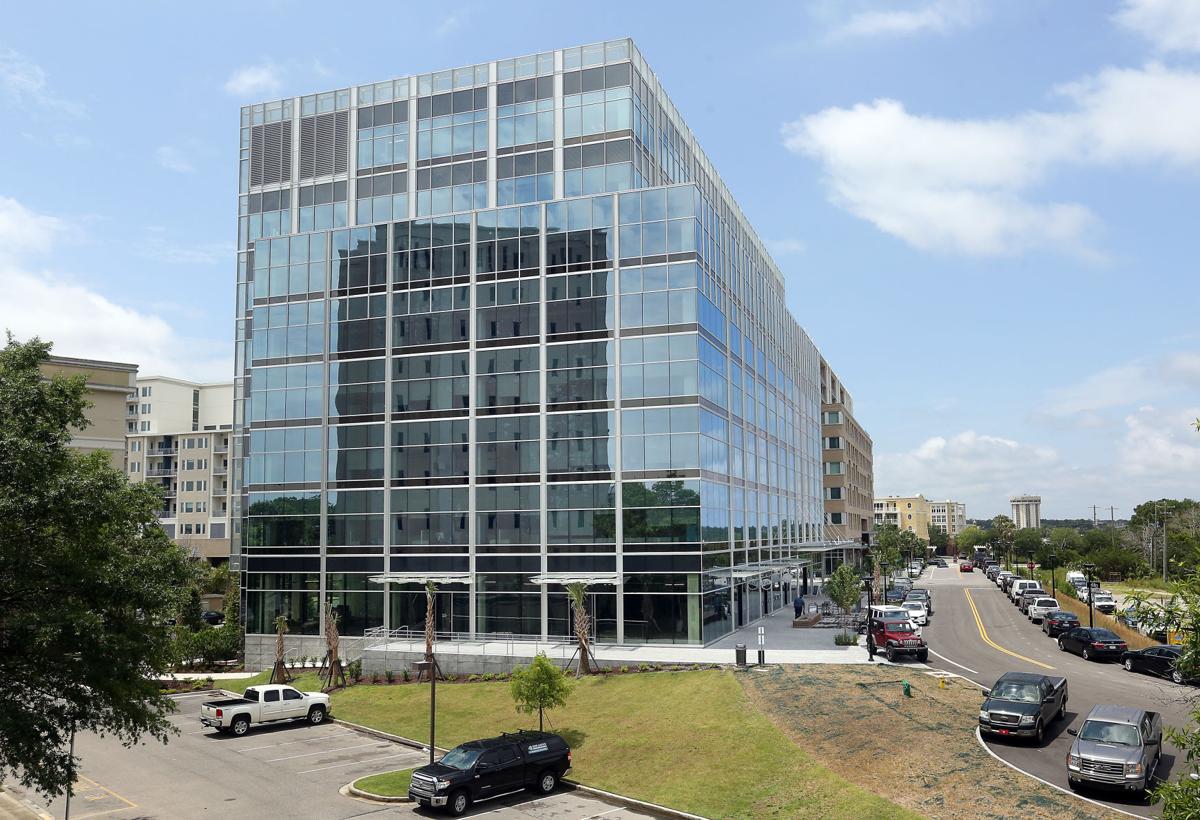 The new 22 WestEdge building was recently completed as part of the developing WestEdge community on the Charleston peninsula. All but two floors of the eight-story glass tower have been leased. Brad Nettles/Staff 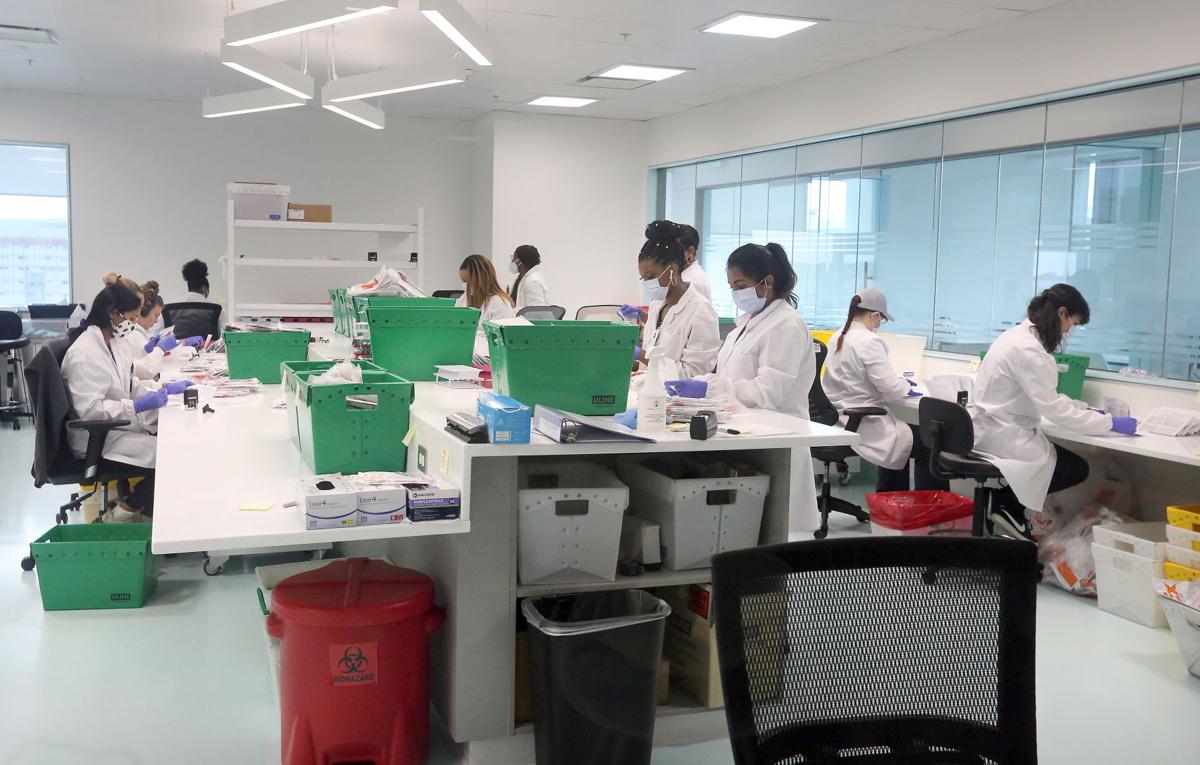 Workers with Vikor Scientific process orders at the company's new headquarters on the top floor of the recently completed eight-story 22 WestEdge office and research building on the Charleston peninsula. Brad Nettles/Staff 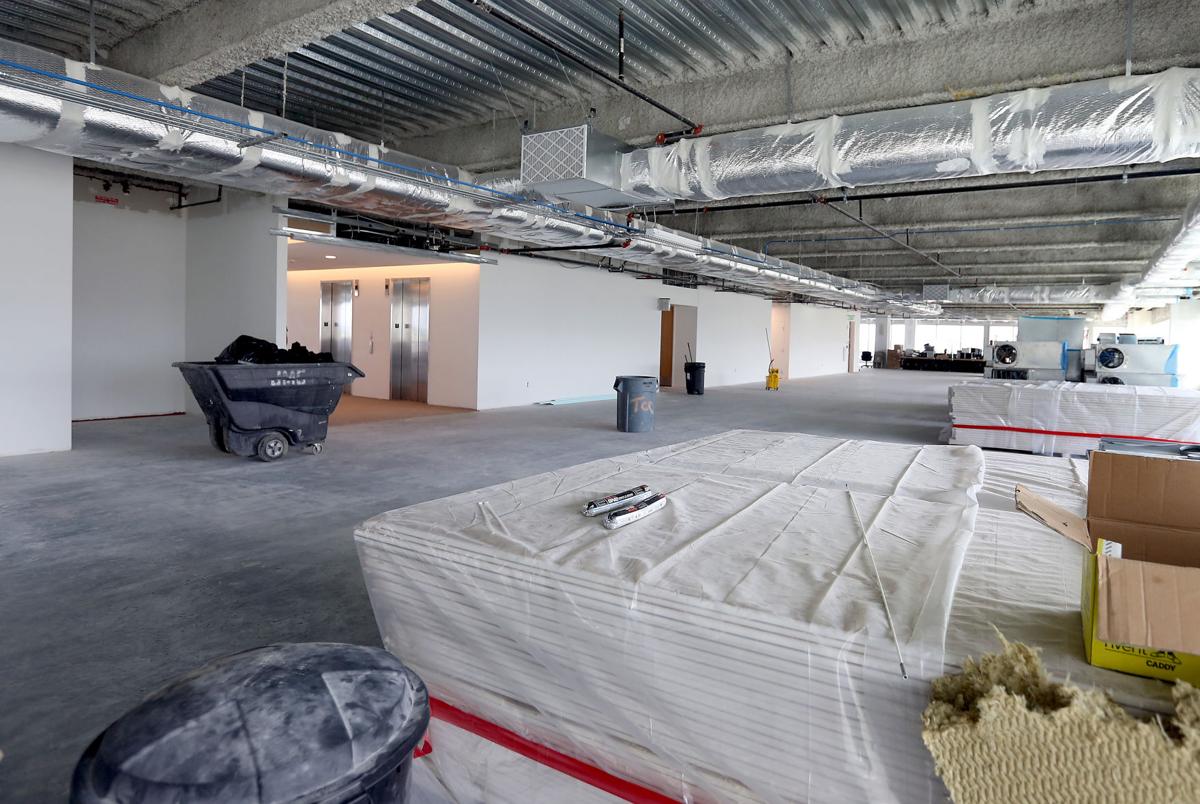 Two floors remain unfinished and available for tenants at the new 22 WestEdge office and research building in the WestEdge development on the Charleston peninsula. Brad Nettles/Staff 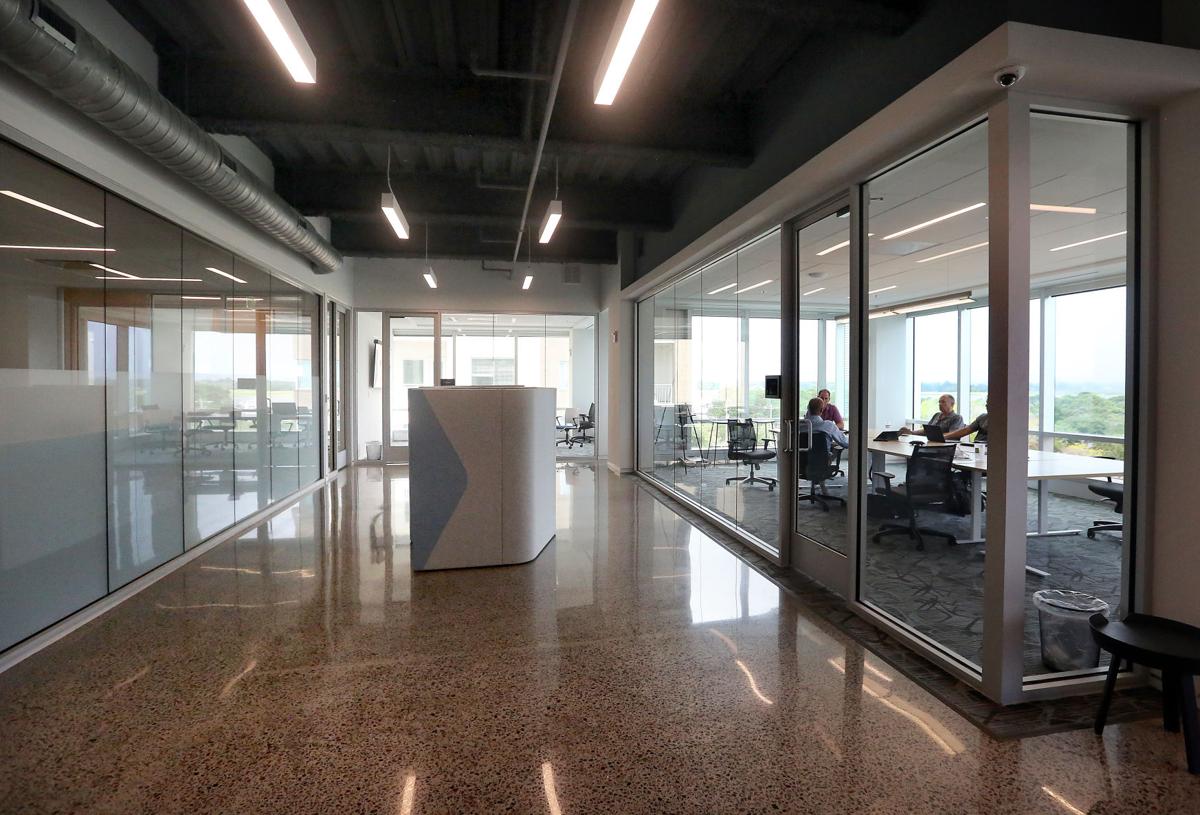 The newly completed 22 WestEdge building offers individual office space along with use of conference rooms. The eight-story glass-exterior building is part of the 60-acre WestEdge development. Brad Nettles/Staff 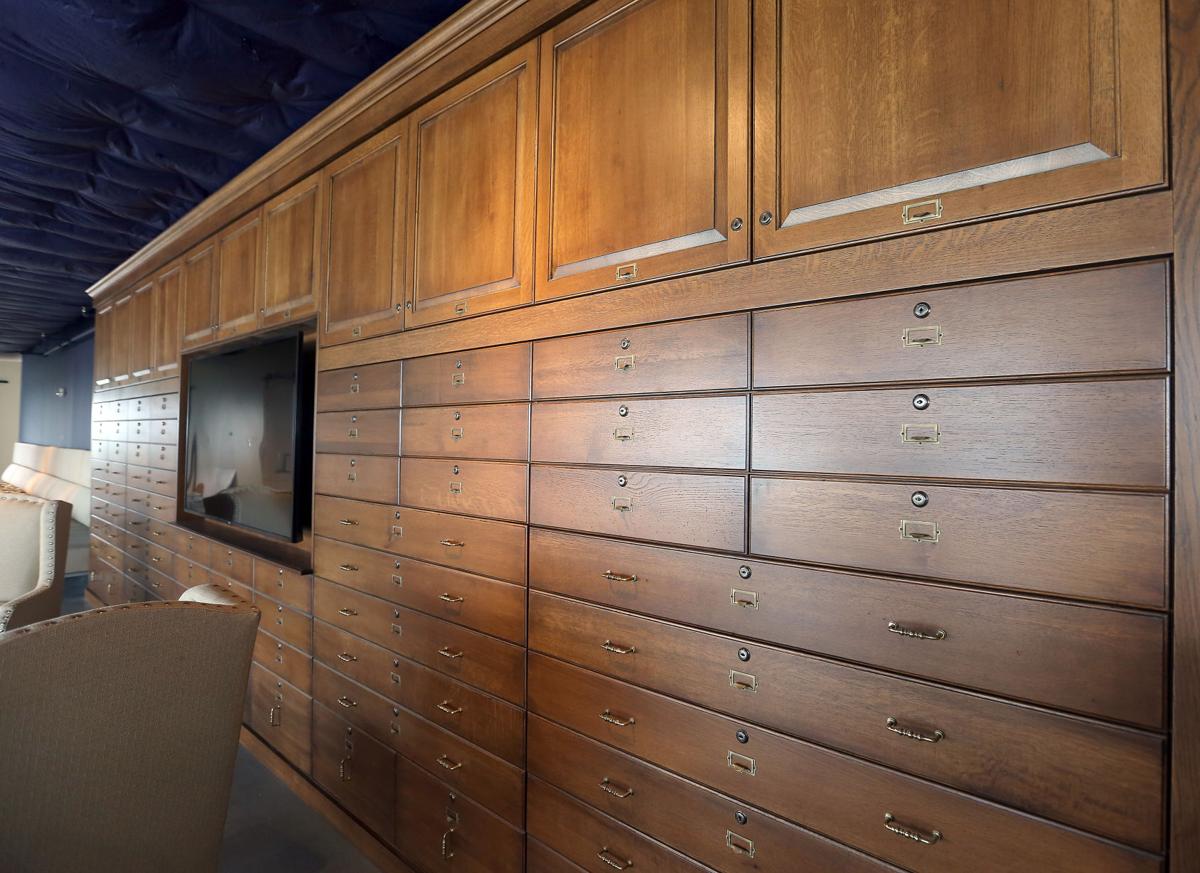 Members of the Charleston Harbour Club can have their own private wine locker. The club is located on the seventh floor of the recently completed 22 WestEdge building on the peninsula. Brad Nettles/Staff 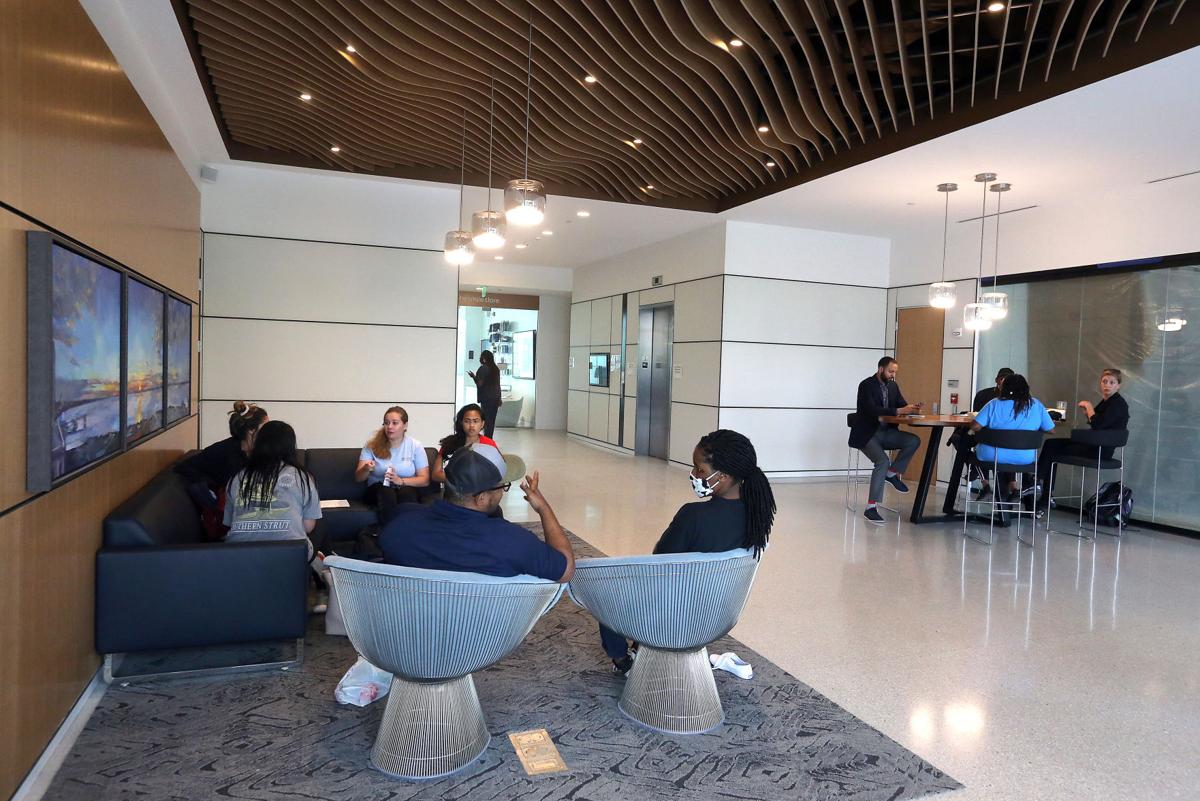 The lobby of the new 22 WestEdge building features a seating area for those waiting to get to one of the seven floors above them or to relax for a bit. Brad Nettles/Staff 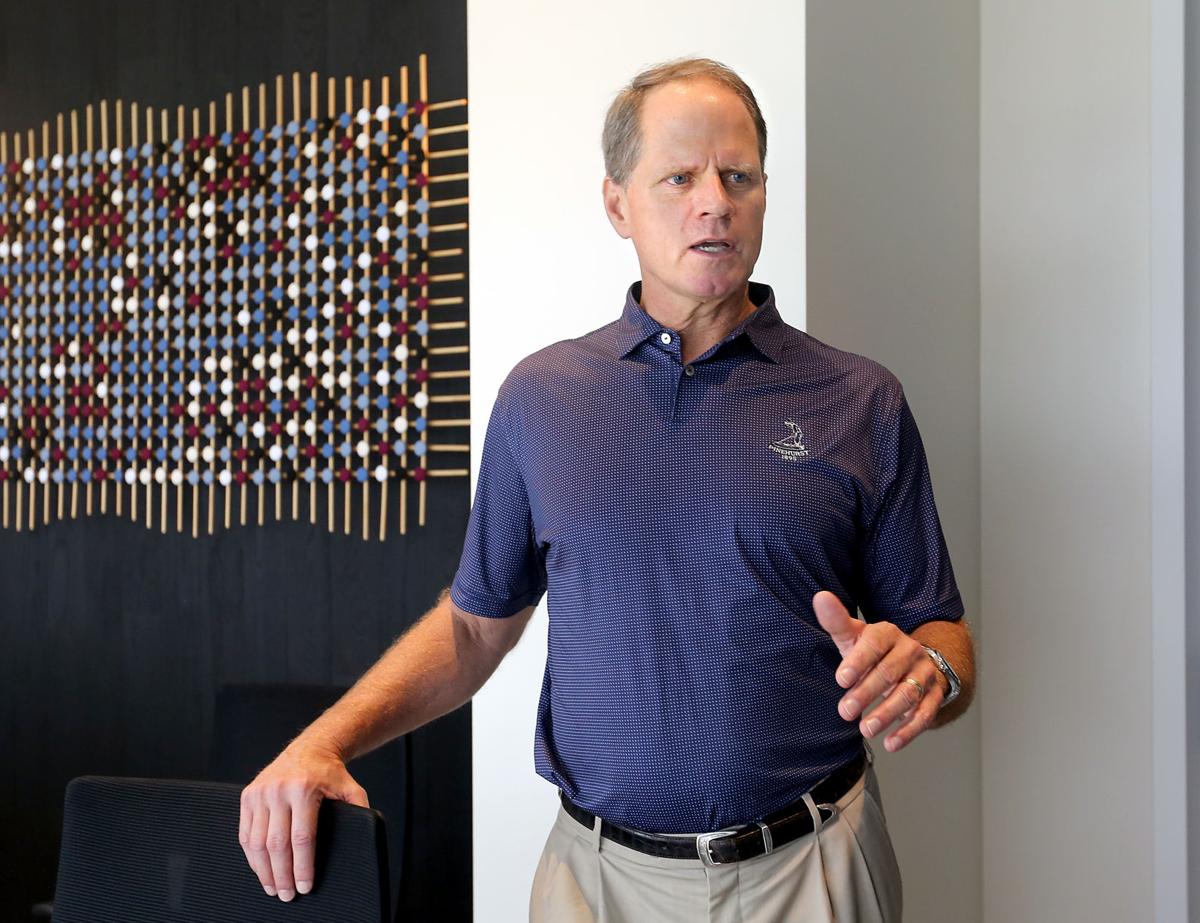 Mark Reese, with Gateway Ventures, talks about the new 22 WestEdge building. The new glass building is part of the WestEdge development. Brad Nettles/Staff 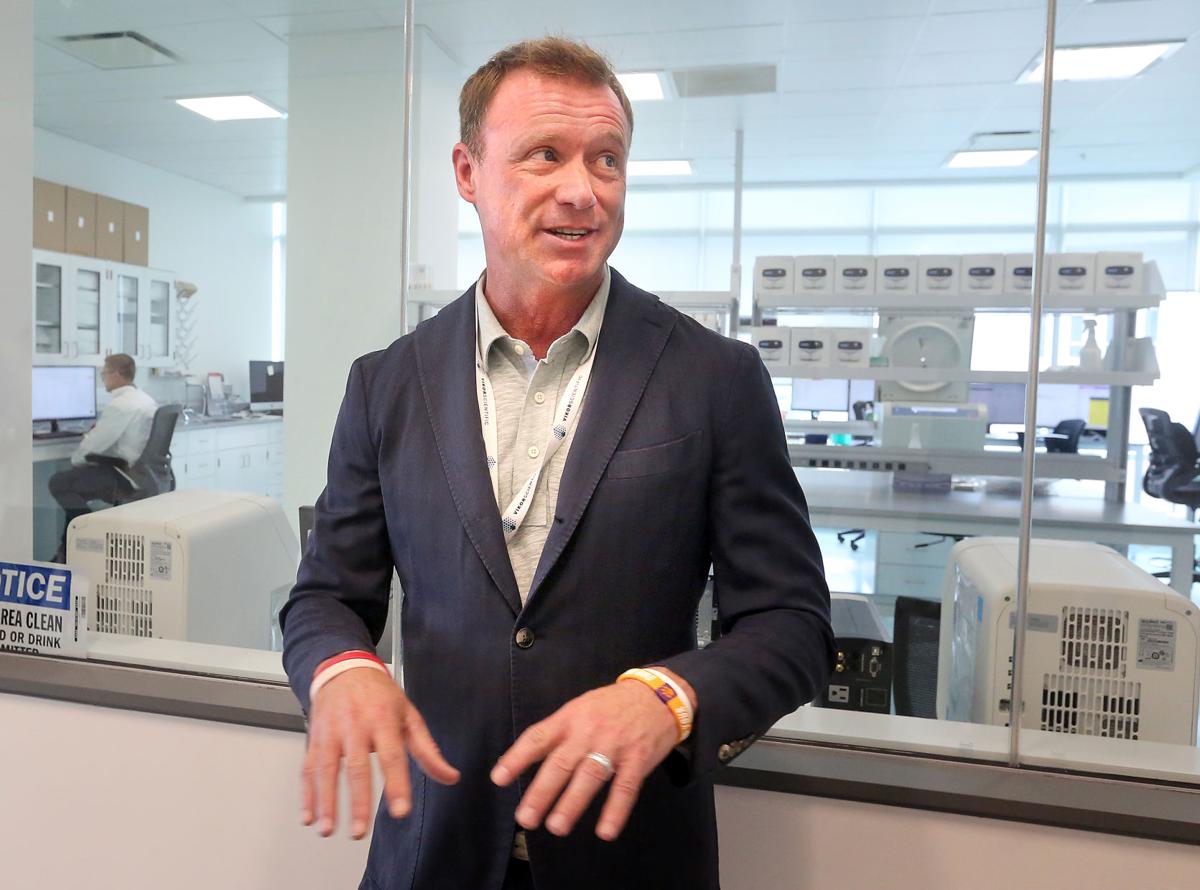 Vikor Scientific co-founder Scotty Branch explains why the company located its headquarters in the newly completed 22 WestEdge building. The pathogen-testing laboratory occupies the top floor of the eight-story structure on the Charleston peninsula. Brad Nettles/Staff 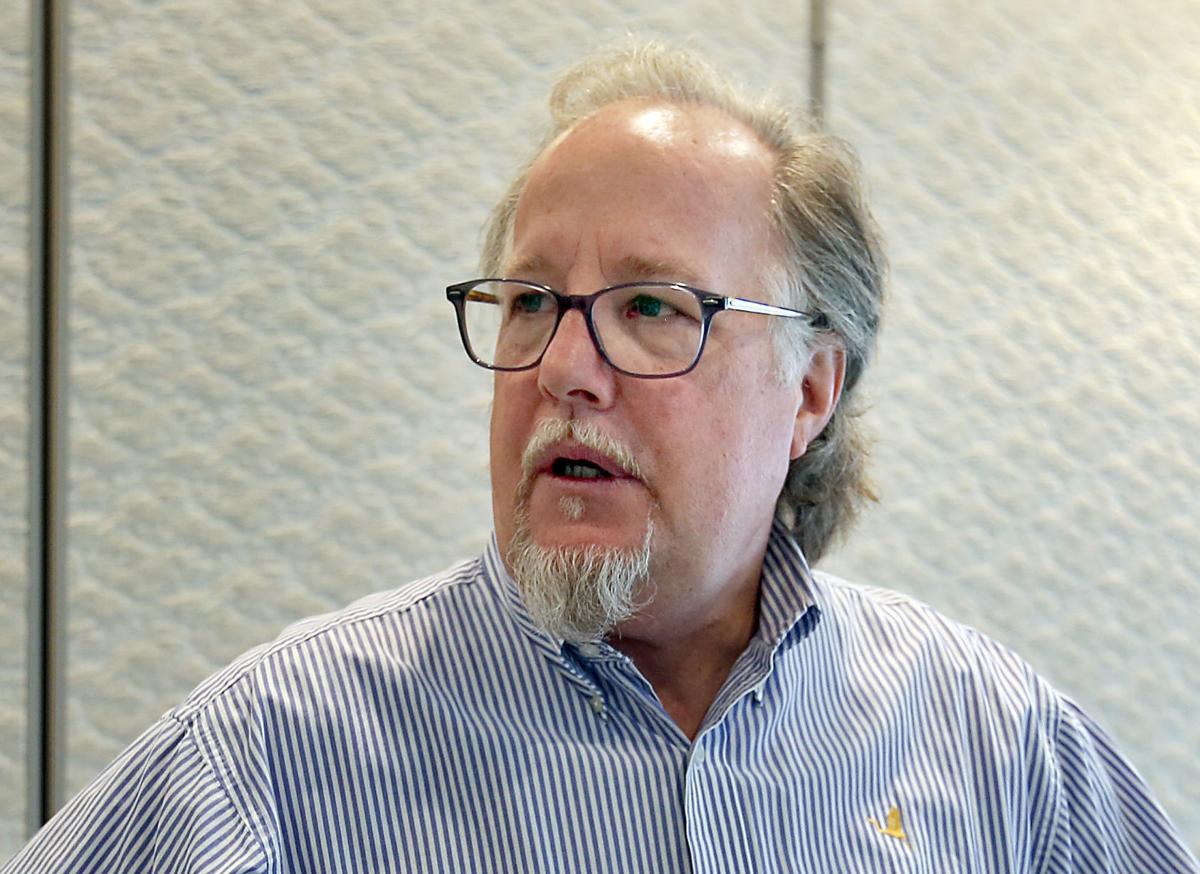 Jim Coyne talks about the differences between the new Harbour Club on the seventh floor of the 22 WestEdge building and the former downtown location. Brad Nettles/Staff

The new 22 WestEdge building was recently completed as part of the developing WestEdge community on the Charleston peninsula. All but two floors of the eight-story glass tower have been leased. Brad Nettles/Staff

The newly completed 22 WestEdge building offers individual office space along with use of conference rooms. The eight-story glass-exterior building is part of the 60-acre WestEdge development. Brad Nettles/Staff

The lobby of the new 22 WestEdge building features a seating area for those waiting to get to one of the seven floors above them or to relax for a bit. Brad Nettles/Staff

The newest WestEdge building is in stark contrast to the former landfill it is built on.

The glass-exterior 22 WestEdge office and research structure rises with a gleam above the underground layers of trash.

Evoking modernity and progress in eight stories, the 125-foot-tall building is touted as the tallest multi-tenant office structure on the peninsula and in the Charleston region.

The 156,000-square-foot building recently opened with 78 percent of it leased in advance, closing out the first phase of the long-planned WestEdge development.

Only two floors remain unoccupied, but ready for build-out with piles of drywall, ceiling tiles, wall studs and other building supplies lying on the floor.

The Medical University of South Carolina occupies the second and third floors with administrative offices and a bioinformatics department.

The fourth floor is made up of the offices of the Charleston Digital Corridor and some co-working space, a meeting room and 13 offices.

The fifth and sixth floors are available to lease.

The 850-member Charleston Harbour Club occupies the entire seventh floor, including an outdoor terrace with views of the Ashley River.

And the top floor, leased to the South Carolina Research Authority before the building was built, is now subleased and occupied by Vikor Scientific, a pathogen-testing laboratory that has grown exponentially since the coronavirus outbreak. It now has 190 employees, with nearly half based in the new building while the rest work remotely.

The company, co-founded by Scotty Branch and Shea Harrelson, has grown so much that it now occupies some of the space on the fourth floor with about 25 of its workers.

Mack Reese of Atlanta-based Gateway Ventures, which manages the building and is part of group that's developing WestEdge, called the 60-acre project near the Ashley River "a city within a city."

"If you need to be in a building running with all the new technology, it's here," he said.

At Vikor, Branch said the move to WestEdge on April 1, just as COVID-19 resulted in the economic shutdown, came at the right time for the company.

"It was a saving grace," he said, pointing out the company was operating in a small office on Meeting Street and about to move just as the outbreak spread.

"Having the building to expand in has been a real blessing to us," he said.

Harrelson, a Vikor co-founder, said it also is important to the company that dining options, such as the Harbour Club, are in the building.

"We often don't have time to go out to lunch," she said. "Being able to go one floor down to eat and come back up is great."

The Harbour Club is just below Vikor, having recently moved across the peninsula from Prioleau Street near Waterfront Park. The seventh-floor space was an ideal fit, said Jim Coyne, a partner with BNG Hospitality, which owns and operates the private dining and social club.

"It's roughly the same size as the Prioleau Street site," Coyne said. "Plus, there is nothing in Charleston that has this view and elevated space."

As for the unfinished fifth and sixth floors, WestEdge Foundation CEO Michael Maher, who also has an office in the building, said the supplies are in place once new tenants are lined up.

"People are looking, but no leases have been signed," he said.

The new building sits beside the nine-story 10 WestEdge  at Spring Street and Lockwood Drive, where Publix supermarket opened last year on the ground floor, with parking and apartments on the upper floors.

Lowcountry county is No. 1 in SC to buy a home rather than to rent one

The other building in the WestEdge fold sits on Fishburne Street across from Joe Riley Park, where the RiverDogs usually play.

As for what's next, Maher said no new structures are in immediate plans, but the WestEdge Foundation is developing conceptual plans for a couple of phase two sites.

"We are excited about winding up this first phase of WestEdge," Maher said. "The opening of 22 WestEdge, the completion of the first segments of WestEdge Street and the other infrastructure and the ongoing work of leasing of retail spaces all combine to put a bow on this phase, and to tee us up for the next phase of the project."

He said the foundation is currently working with a national research group to help refine WestEdge's strategies to advance life sciences innovation in the region, in collaboration with MUSC and the other agencies in Charleston.

"As we move into phase two of WestEdge’s development, we want to make certain we are able to keep the momentum going on creating a thriving hub of research and life science innovation," Maher said.

He anticipates phase two will include more of the mix of uses already in place along with additional infrastructure investments to address some of the challenges of the site that will link the north and south of WestEdge "into a cohesive whole."

Perkins and Will Architects of Atlanta designed the building.