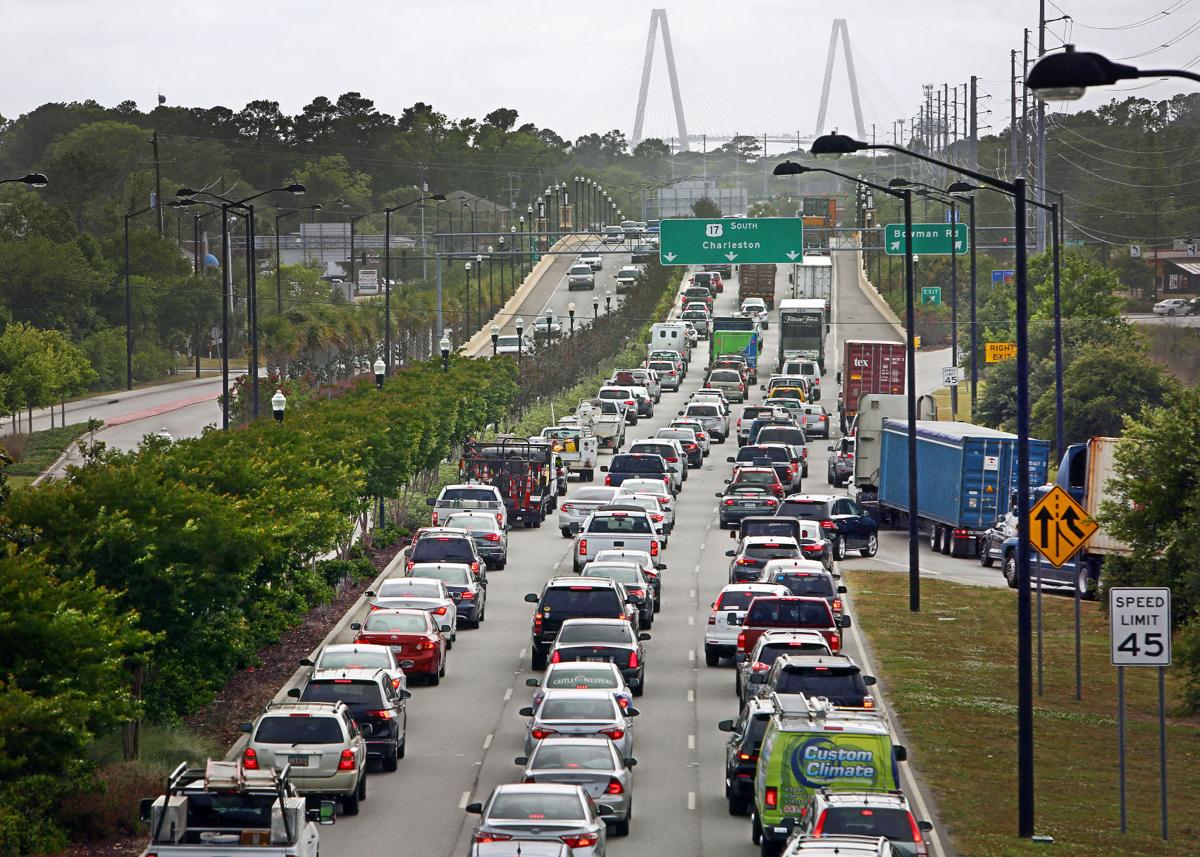 Bumper-to-bumper traffic clogs U.S. Highway 17 in Mount Pleasant. Town Council is grappling with its Comprehensive Plan as it increasingly struggles with traffic and growth issues and a lack of affordable housing. File/Staff 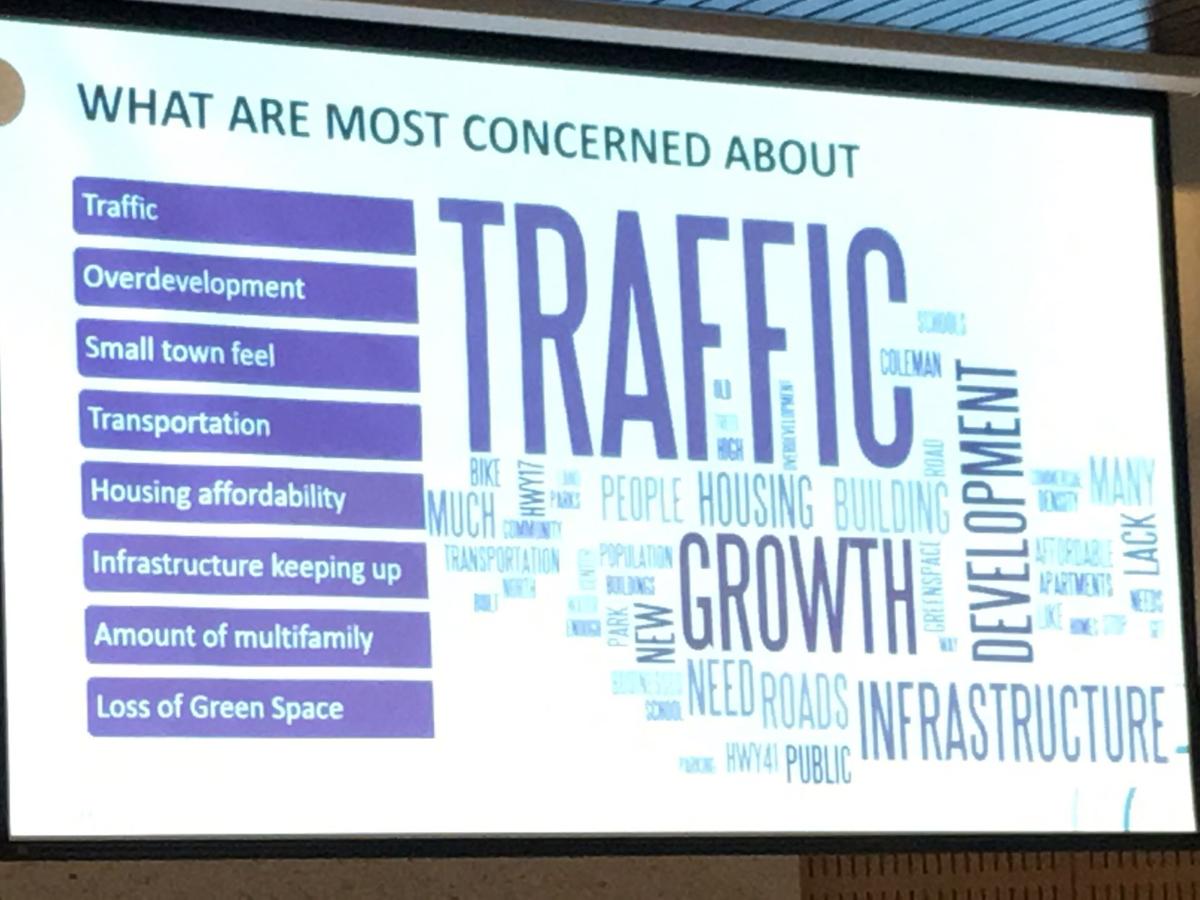 A word cloud, built from more than 900 comments submitted to Mount Pleasant, highlights the most-mentioned concerns during a presentation on the town's Comprehensive Plan on Tuesday, Jan. 30, 2018. File/David Slade/Staff

MOUNT PLEASANT — As Town Council debates a guidance plan for the next decade, some say an unpleasant choice awaits between two things residents don't want: more growth or higher taxes.

It's a discussion that's been growing louder since the start of 2019 when town administration officials said Mount Pleasant's cost of providing services would outstrip its revenue in five years. Meanwhile, council has been moving aggressively to restrict growth and development by limiting annual building permits and hiking development fees.

"If we want to have a sustainable town, we need to increase our tax base ... or increase taxes," Councilwoman Guang Ming Whitley said Monday at a council meeting.

Whitley said most people she knows would rather pay a bit more property tax than encourage more residential development.

With an estimated four years remaining until the town faces a predicted cash crunch, Town Council is wrestling with the Comprehensive Plan — a voluminous resident-driven plan for next 10 years. The plan, which the town must finalize to comply with state law, includes a recommendation for high-density development "hubs" that has proven controversial.

"During the election I knocked on a bunch of doors," recently elected Councilman Jake Rambo said during the meeting. "Not one person said they wished we had more density."

Several town resident volunteers who worked for nearly a year and a half to create the draft Comprehensive Plan disagreed. Some said the town already has "hubs" like the plan proposes in large developments such as Belle Hall and Seaside Farms that include single-family homes, multifamily housing and businesses.

Keeping the hub concept in the plan would amount to the town advocating such development in the future, in certain places.

"They need to be in (the plan), for the future of our town," said Matt Jones, who served on the Planning Forum.

Grant Gilmore III, a town resident, member of the forum and director of the College of Charleston Historic Preservation and Community Planning Program, said high-density development in appropriate areas could help the town make up for the coming loss of high-value taxable property due to climate change.

"Our most expensive properties that we get the most tax-dollars from will be under water," he told council members.

Opponents argued that the town already has suburban sprawl and adding more high-density development would result in both sprawl and high density. One resident told council members that the "hub" idea is part of a plan by the United Nations to herd people into concentrated areas and make them give up their cars.

Like Rambo, a majority of council members and the mayor were elected partly because they pledged to protect the town's quality of life and put the brakes on development. Rapid residential development has nearly doubled Mount Pleasant's population since 2000 when it had 47,609 residents.

O'Rourke said many of the growth-related concerns he hears are less about the increase in the town's population and more about the increase in traffic. Lots of that traffic comes from people who commute to work in Mount Pleasant but can't afford to live there, so creating more housing that's affordable could reduce traffic, he said.

When talk about raising taxes arose at Town Council's 2019 all-day retreat, Mayor Will Haynie reminded council members that reporters were attending the public meeting; he did the same Monday. The mayor said he agreed with Whitley that most residents would prefer a tax increase to more population increase.

"That doesn't mean — and the press is in here — that we're getting ready to raise taxes," Haynie said.

Residential development generates lots of fee income for the town but over the long term most residential development is a financial loser for Mount Pleasant. A single-family home needs to be worth about $1 million in order to generate enough taxes to pay for the services the town provides, Administrator Eric DeMoura said.

Councilman Howard Chapman, who used to run the Charleston Area Regional Transportation Authority, said that having some concentrated areas where lots of people live could ease traffic. He said a good transit system — there isn't one now in Mount Pleasant — could take cars off the road, but it's very difficult to have a good transit system in places where most of the housing is single-family homes.

It was immediately criticized by some, including the Save Shem Creek group, as not going far enough to slow the town's residential growth. Town Council is expected to discuss the plan more at the council's annual retreat later this month, and hopes to have a final plan ready for a public hearing and vote by April.

Mount Pleasant's draft Comprehensive Plan, which is headed to Town Council for review, a public hearing, and a vote.