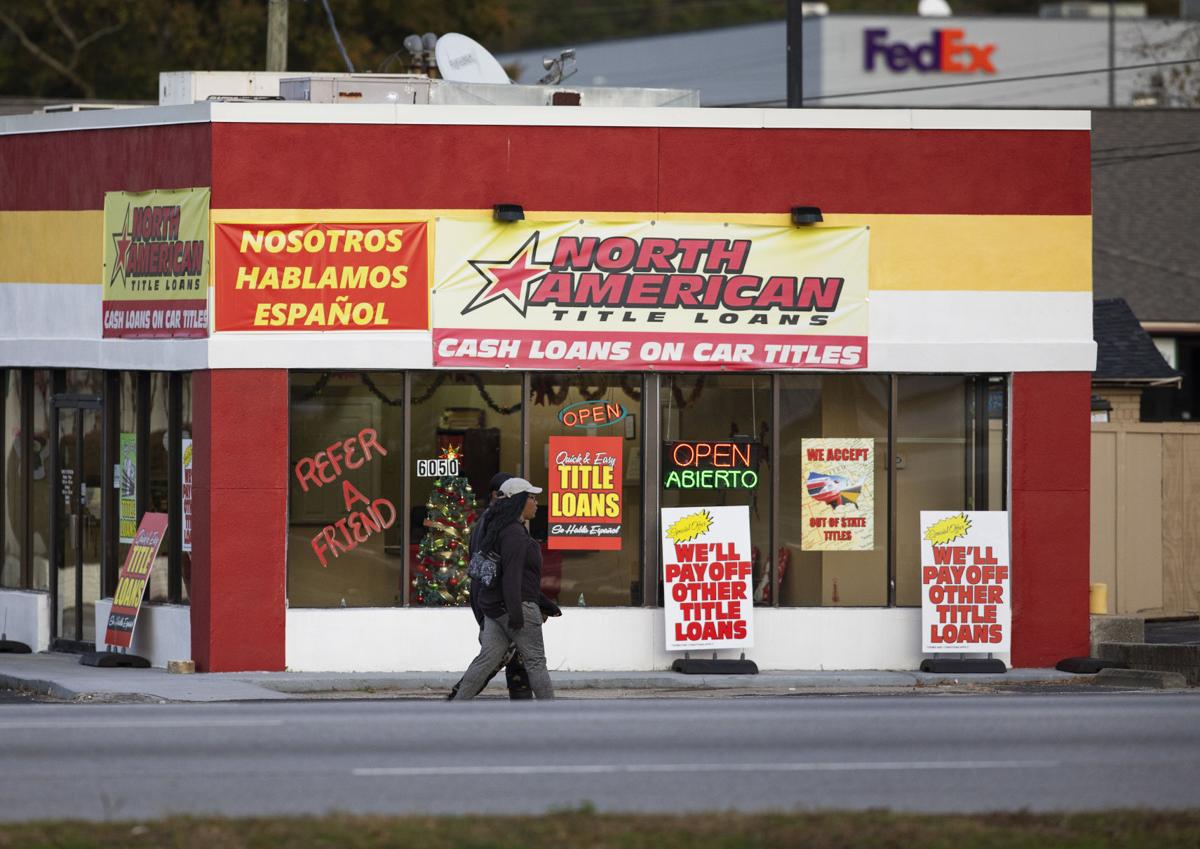 People walk by a title loans business on Rivers Avenue in North Charleston on Monday, Dec. 9, 2019. Several high-interest loan companies are accused of using South Carolina as a haven to prey on low-income residents in North Carolina and circumvent that state's consumer protection laws. Lauren Petracca/Staff 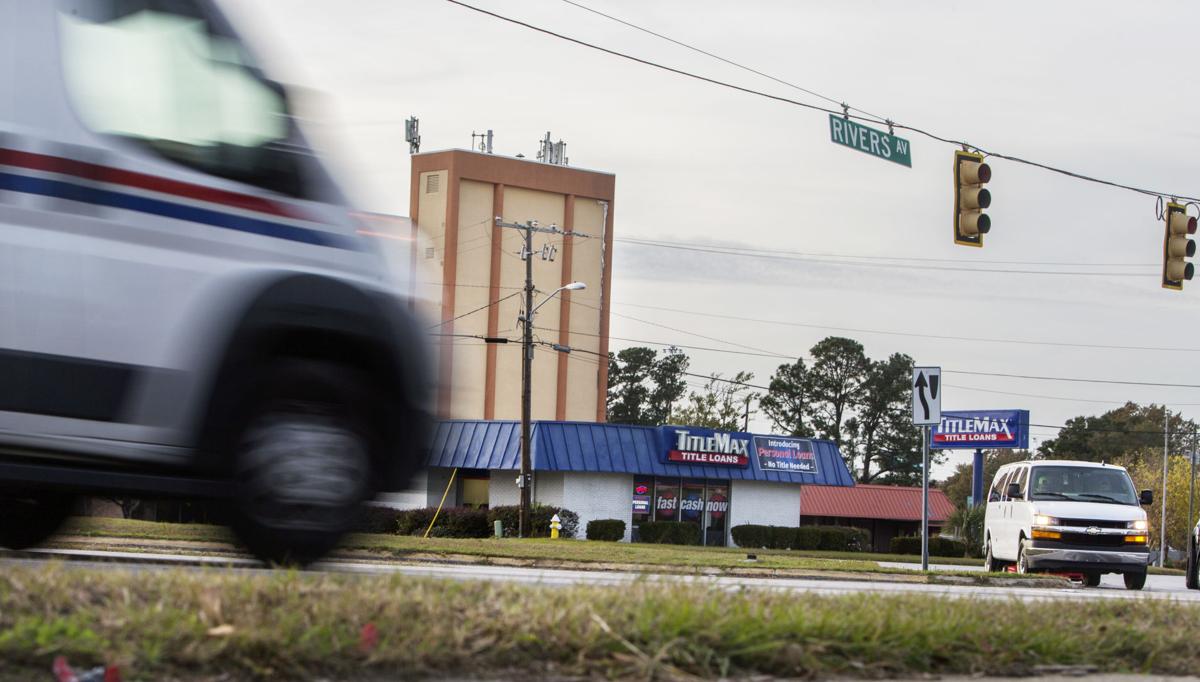 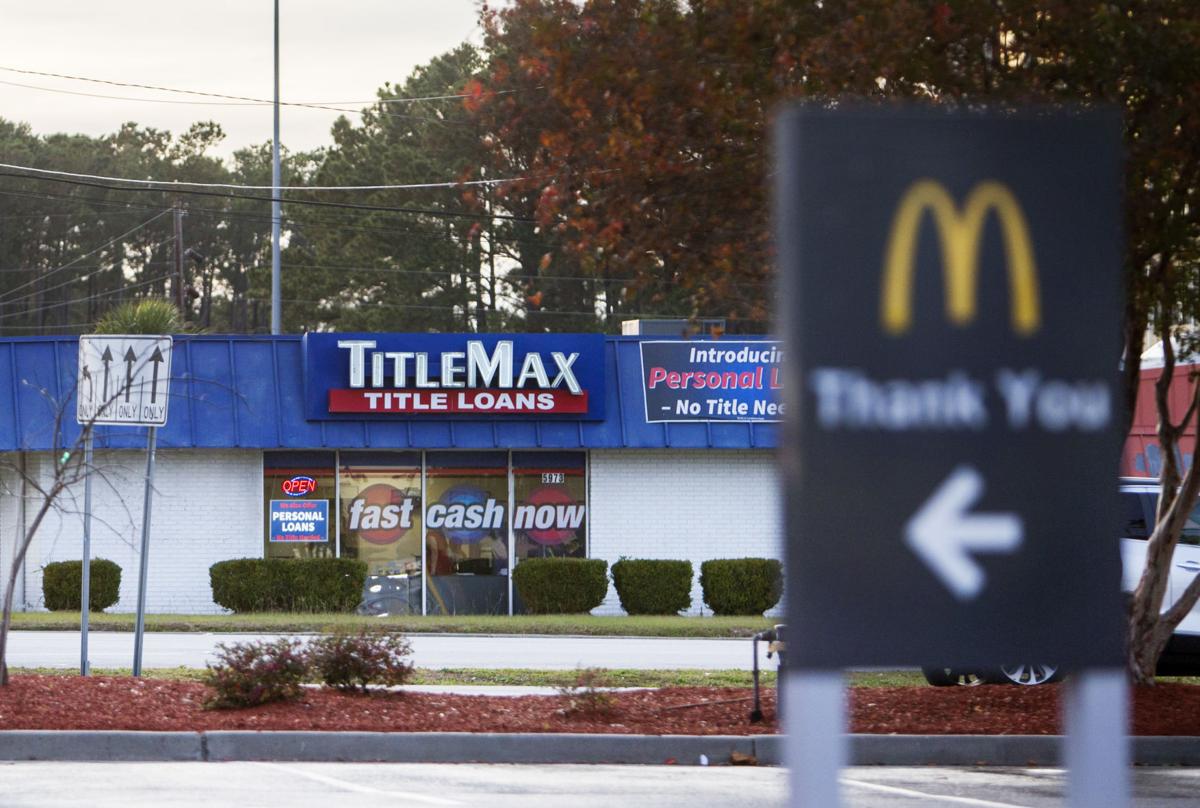 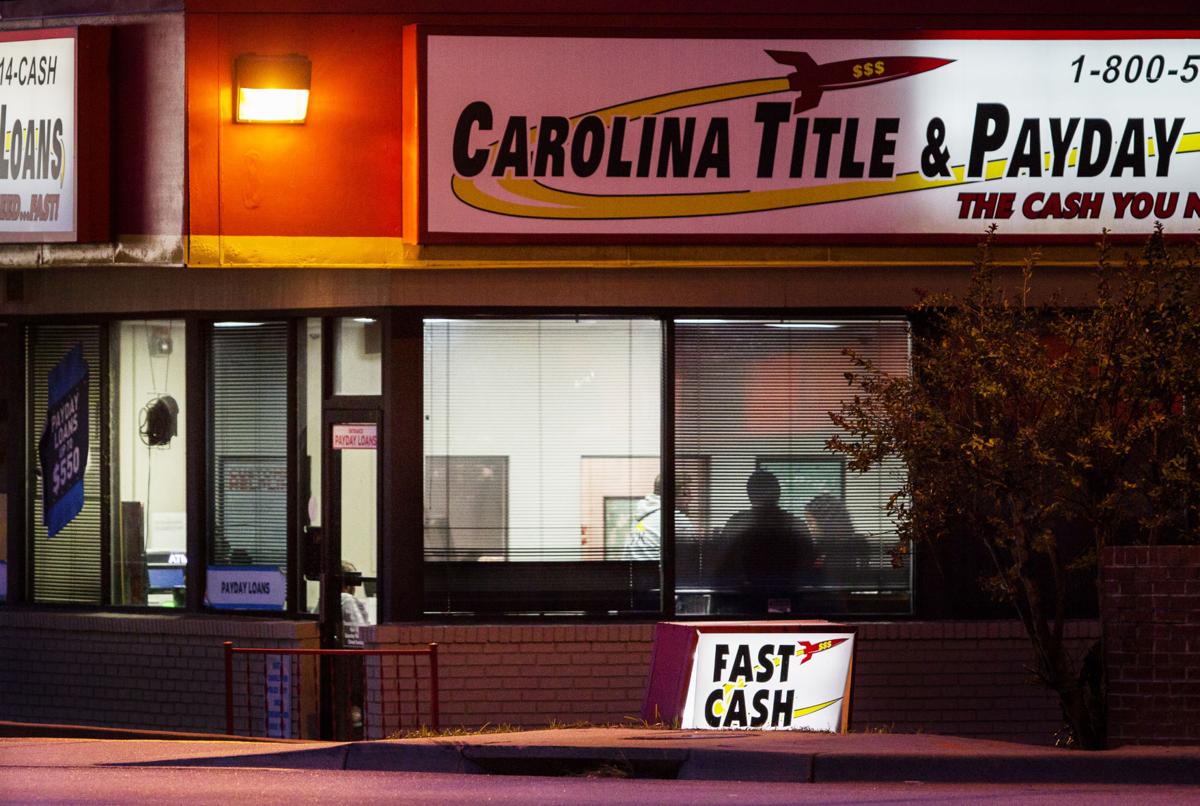 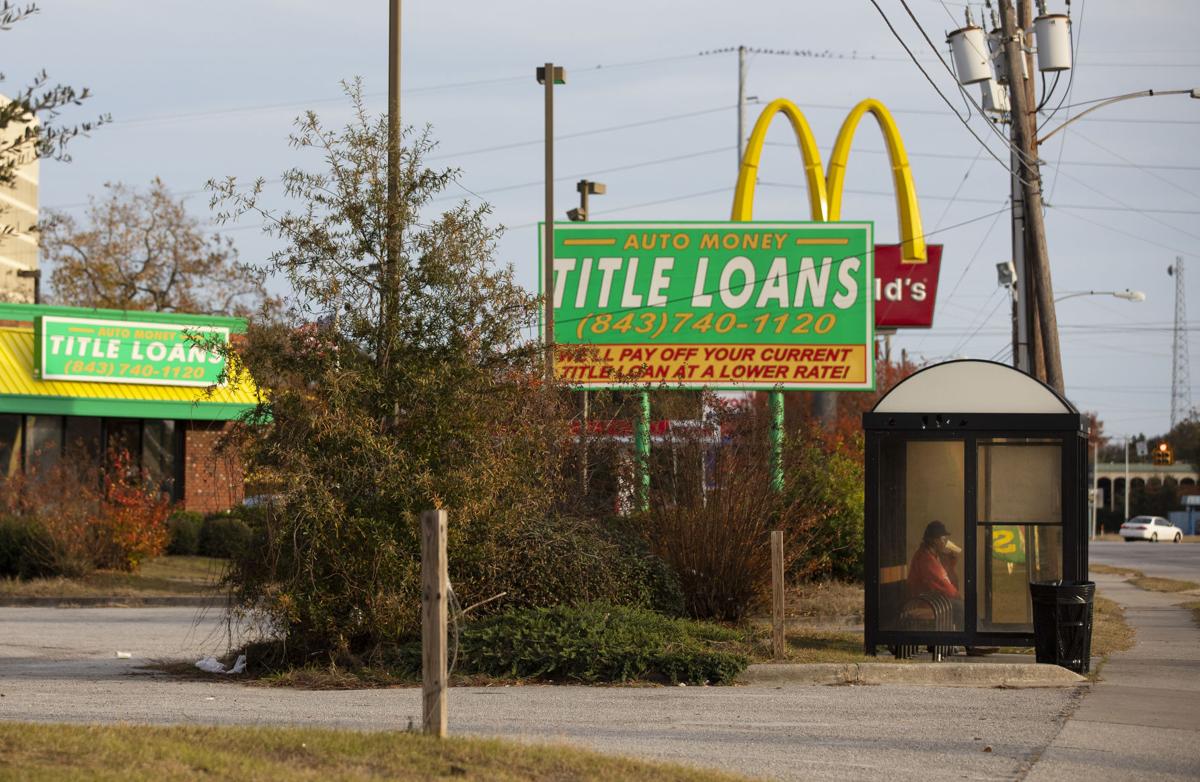 A person waits at a bus stop near a Title Loans business on Rivers Avenue in North Charleston on Monday, December 9, 2019. Lauren Petracca/Staff

People walk by a title loans business on Rivers Avenue in North Charleston on Monday, Dec. 9, 2019. Several high-interest loan companies are accused of using South Carolina as a haven to prey on low-income residents in North Carolina and circumvent that state's consumer protection laws. Lauren Petracca/Staff

Several high-interest loan companies are accused of using South Carolina as a haven to prey on low-income residents in North Carolina and circumvent that state's consumer protection laws.

The lenders are facing a growing number of lawsuits in North Carolina for allegedly setting up shop along the border, luring people across the state line into South Carolina and convincing them to sign what are known as title loans.

Those small-dollar loans can carry interest rates of up to 300 percent annually, and require people to post their cars, trucks or motorcycles as collateral.

Hundreds of North Carolinians signed similar loan agreements in recent years. But many are now suing the lending companies in state and federal court, where they are represented by the Greensboro Law Center.

The lawsuits allege North Carolina law prohibits the loans from being enforced. And it is seeking money from the companies for seizing people's vehicles and charging "excessive" interest rates.

South Carolinians may recognize the companies by their colorful storefronts. The lenders can be found in nearly every county in South Carolina. Their offices are often located next to fast food chains or in strip malls, flanked by signs reading "Fast Cash" and "Refer a Friend."

The title loans are legal in South Carolina, where state lawmakers have shown little interest in curtailing high-interest lending. That's not the case in North Carolina, a state with some of the country's strongest consumer-protection laws.

The outcome of the lawsuits could affect the business practices for South Carolina's entire consumer lending industry, which sold more than $2.6 billion in high-interest loans last year. The litigation also highlights the difficulties of regulating the controversial businesses with a patchwork of state laws.

Lisa Stifler is the director of state policy at the Center for Responsible Lending, a North Carolina-based group that advocates for stricter regulations on predatory lending. The lawsuits, she said, are just the latest example of high-interest lenders searching for loopholes to access markets in states where they are banned.

"From our perspective, it's a pattern and practice around evading state laws to continue to try to operate," Stifler said.

None of the title loan companies responded to emails seeking comment for this story. Messages left with their attorneys went unanswered. The Greensboro Law Center declined to comment because the lawsuits are still pending.

It's not clear how many title loans the companies sold to North Carolina residents in recent years. The Post and Courier couldn't determine if the North Carolina borrowers are included in the more than 4 million high-interest loans that were reported in South Carolina between 2016 and 2018.

The attorneys for AutoMoney, which is based on Meeting Street in Charleston, told a federal judge the lawsuits are "of the utmost importance" to lenders in South Carolina.

They also warned the litigation could damage the company's finances and "threaten the jobs of hundreds of AutoMoney’s employees working in South Carolina."

All of the title loan businesses that are being sued in North Carolina operate stores along the state line. They dot the interstate highways running into South Carolina, from the Grand Strand to the Upstate.

Some are within several hundred feet of the North Carolina border.

The title loan companies admit they do business with North Carolina residents. But they argue the loans are legal because the contracts are signed at offices in Gaffney, Dillon, Loris, Cheraw, Landrum, Lancaster, Bennettsville, Fort Mill, Indian Land and Little River.

AutoMoney’s own website prominently notes that “title loan transactions are prohibited within the state of North Carolina.”

In federal court filings, the title lenders argued North Carolina's laws don't apply to them because they don't maintain a physical office space in that state.

North Carolinians willingly drive to South Carolina to enter into the contracts, the companies said. The money is exchanged at the South Carolina stores. And the borrowers are fully aware of the "terms and risks of such loans."

"These meritless claims are causing serious harm to the industry," the attorneys for Carolina Title Loans told a North Carolina judge earlier this year.

But the Greensboro Law Center, a plaintiffs firm, believes the companies are violating North Carolina law. Lawmakers have never allowed title loans to be sold in North Carolina, and the state's Legislature ended other high-interest lending there in the early 2000s.

The highest interest rate that can be assessed on a loan in North Carolina is 30 percent annually.

The title loans sold in South Carolina don't come anywhere close to that. The lawsuits allege the loans can't be enforced because portions of the financial transactions took place in North Carolina.

The title lenders knew the borrowers were North Carolina residents when they signed them up for the loans, according to the lawsuits. The companies advised people over the phone to travel to South Carolina to sign the contracts. And they allegedly targeted North Carolinians with advertisements for the high-interest loans.

Court records show the lenders also used the North Carolina Department of Transportation to place liens on vehicles registered in the state. And when borrowers missed their payments, the title loan companies repossessed those cars in North Carolina.

The Post and Courier could not confirm how many vehicles were seized in North Carolina in recent years. And it's unclear if those cars are included in the more than 50,000 vehicles that South Carolina lenders reportedly repossessed in 2017 and 2018.

It's not the first time the companies' practices have been called into question.

TitleMax is currently tied up in federal lawsuits with Pennsylvania officials over hundreds of other liens it filed against cars and trucks in that state.

Title loans are illegal in Pennsylvania, too, but TitleMax continues to claim it can't be regulated there either.

North Carolina officials have a history of challenging lenders it believes are illegally profiting off people in the Tar Heel State.

In 2013, for instance, the North Carolina Attorney General's Office filed a lawsuit against Western Sky, an online lender that sold loans carrying interest rates of up to 342 percent. The lawsuit resulted in the company being forced to pay back $9 million to borrowers.

The state also leveled a similar lawsuit against Approved Financial earlier this year. That company allegedly sold North Carolinians hundreds of high-interest title loans online. The business then wired cash to Walmart stores in South Carolina where the borrowers were instructed to pick up their money.

In that way, the company attempted to claim it was not violating North Carolina's laws, according to the lawsuit.

North Carolina Attorney General Josh Stein has not intervened in the growing number of cases filed against the title lenders operating out of South Carolina. But his office condemned the companies for allegedly soliciting business from North Carolina residents.

"North Carolina bans vehicle title loans because they are predatory," Stein's office said in an emailed statement. "And it's wrong for South Carolina companies to lure North Carolinians across the border to take advantage of them."

The South Carolina companies argue they're nothing like the lenders the attorney general has gone after. AutoMoney explained in court that it doesn't approve loans over the phone or online. And the borrowers in North Carolina, it said, contact the company first.

The issue is simple, according to the companies. They don't believe state law can prevent North Carolina residents from jumping across the border, signing a high-interest loan and returning to their homes in Charlotte, Lumberton or Wilmington.

The companies often point to a 2010 decision by a federal appeals court in Chicago. That court ruled that Indiana couldn't restrict its residents from signing contracts with title lenders if they drove across the border into Illinois.

That ruling was appealed to the U.S. Supreme Court, but it was never taken up.

The title lending industry has used the case as a legal shield ever since. AutoMoney recently filed its own lawsuit in South Carolina federal court, and made the exact same legal arguments.

"North Carolina does not have a substantial interest in regulating its residents’ activities outside of its borders," AutoMoney's attorneys told U.S. District Judge Richard Gergel.

The lawsuits could soon result in a precedent-setting decision for the consumer lending industry in South Carolina and, possibly, the rest of the country.

But, at this point, it's unclear who will triumph in the border dispute.