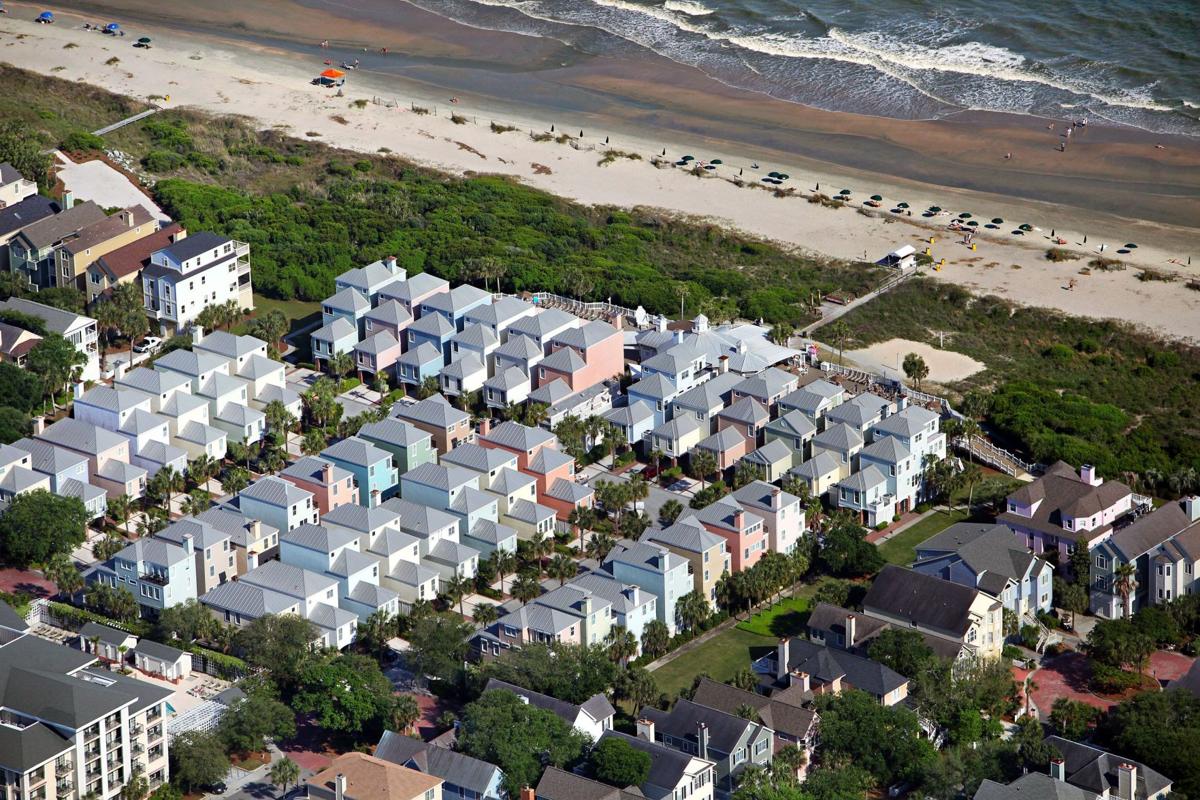 The aftermath of Hugo and recovery helped fuel the growth that was to come in South Carolina. Insurance payouts meant that un-air-conditioned beach shacks were replaced with properties that were more modern, more valuable, and more costly to replace. File/Staff 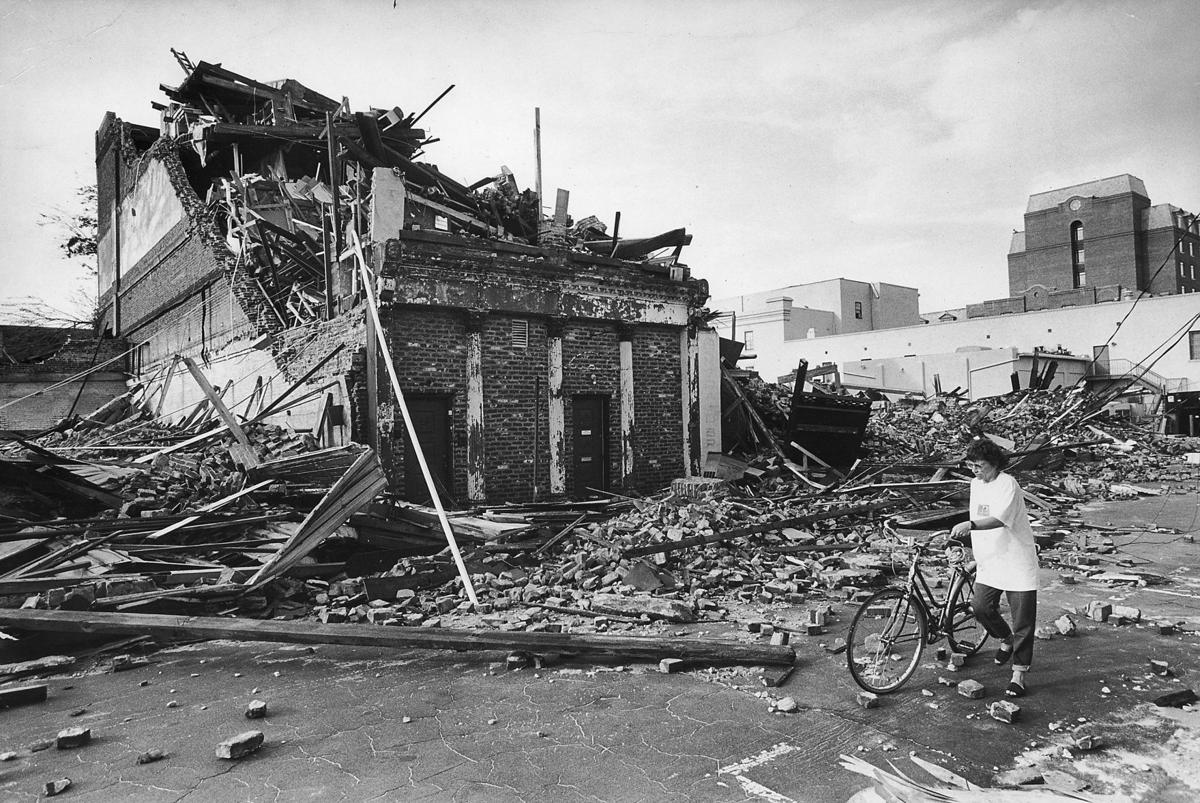 Gwylene Gallimard walks her bike past a building on Hayne Street in downtown Charleston that was destroyed by Hurricane Hugo. Hugo slammed into the South Carolina coast as a Category 4 hurricane overnight on Sept. 21, 1989. File/Staff 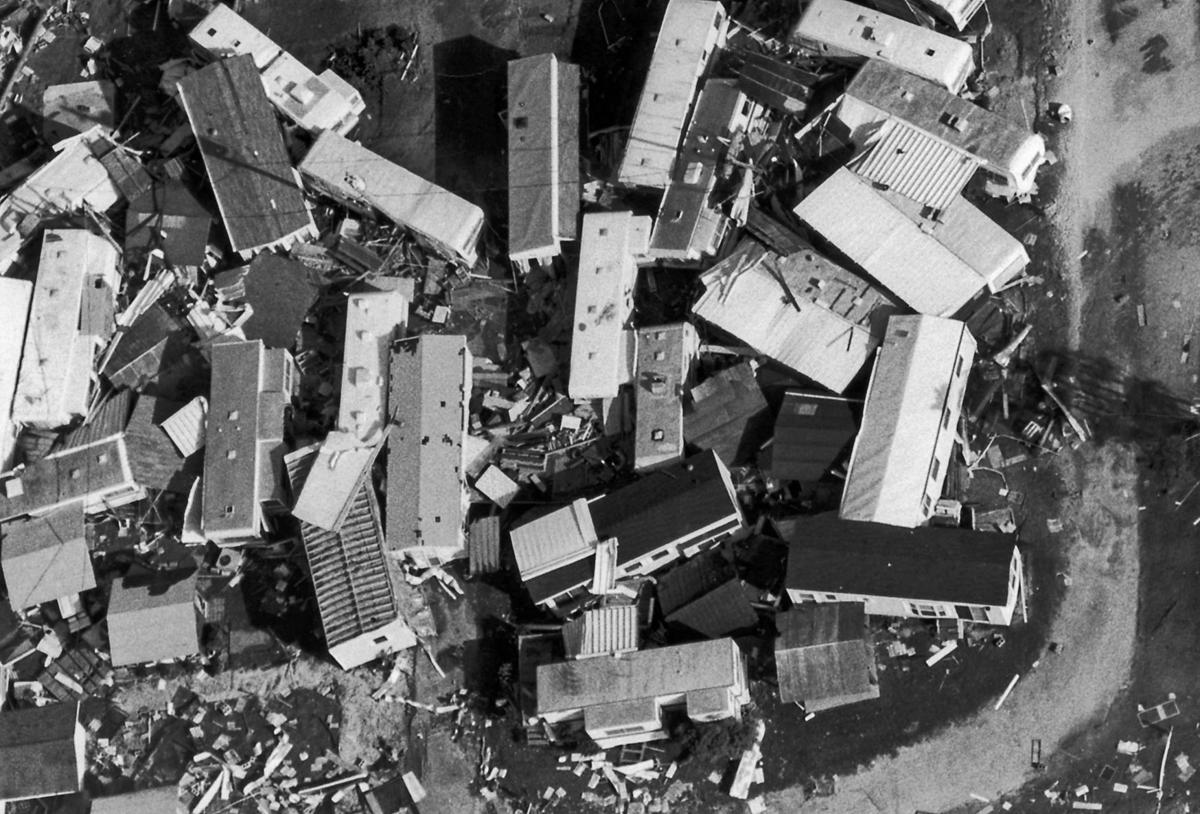 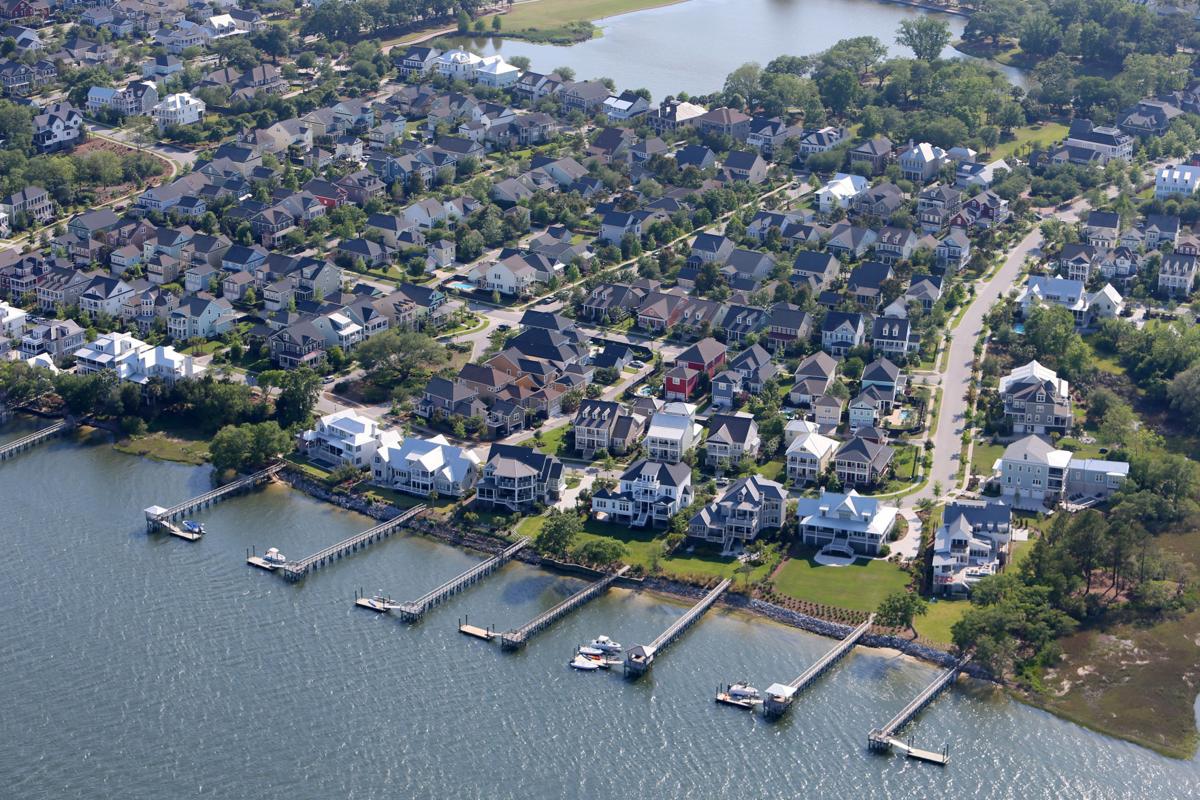 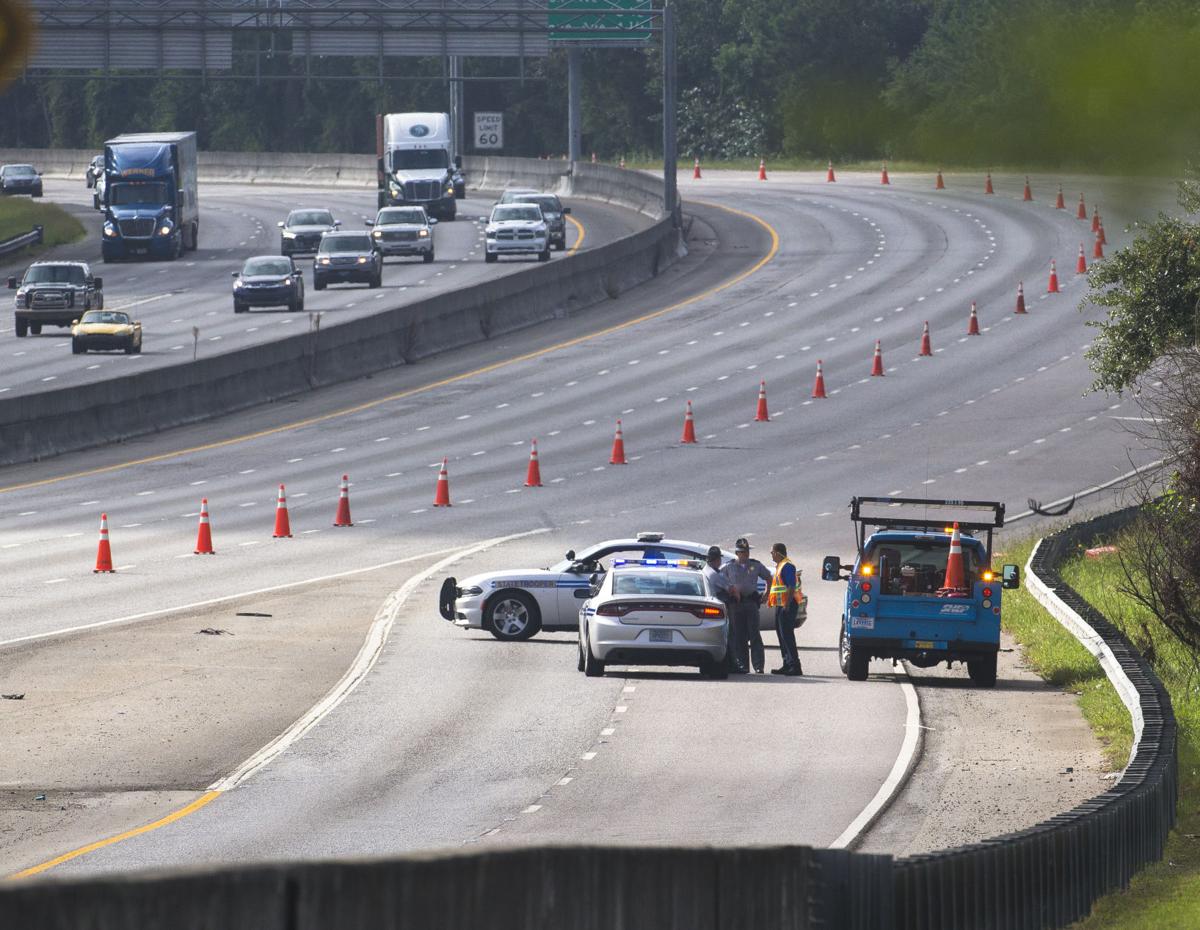 The eastbound lane on I-26 was reversed for evacuation as Hurricane Dorian threatened the coast. Recent near-misses have made many residents skeptical. Andrew J. Whitaker/Staff 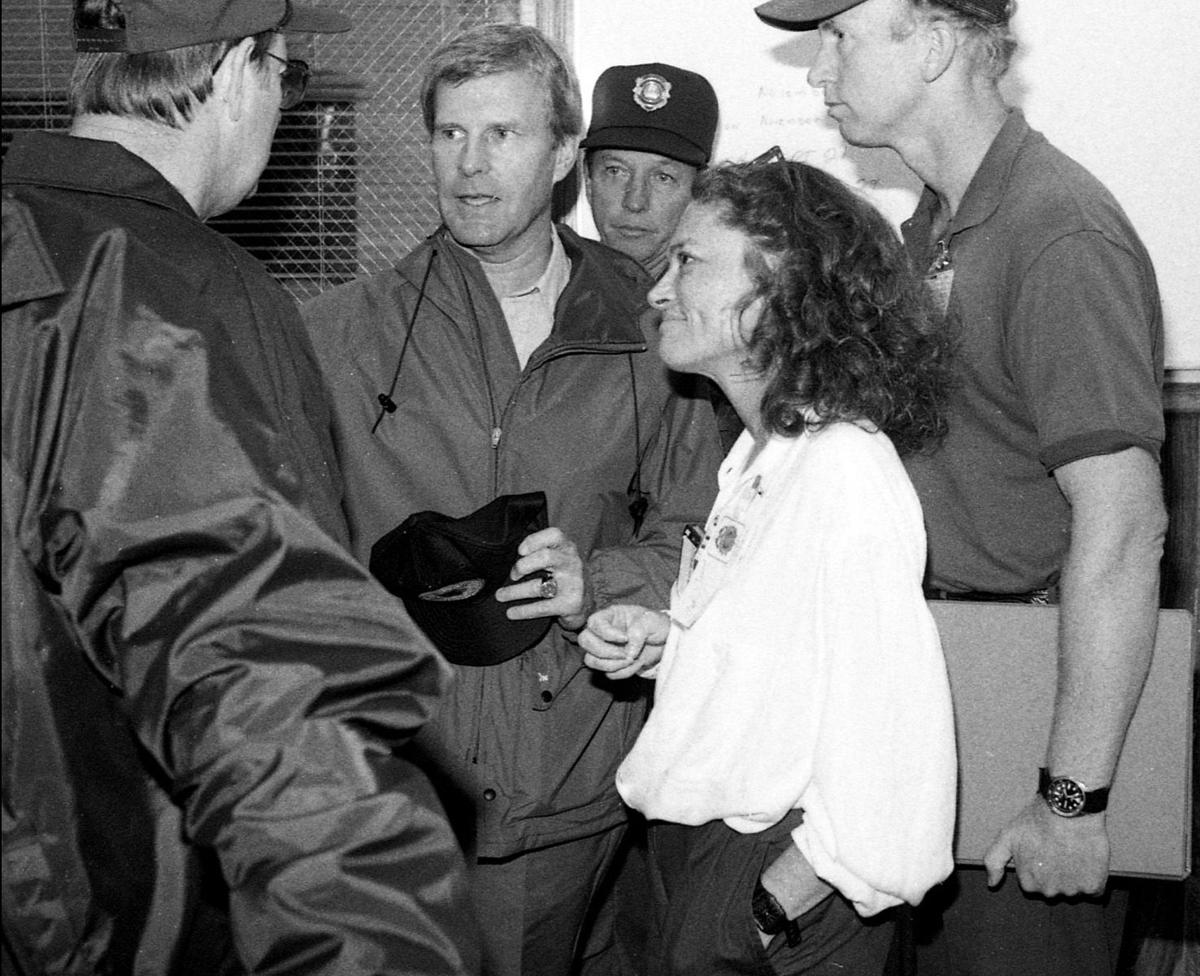 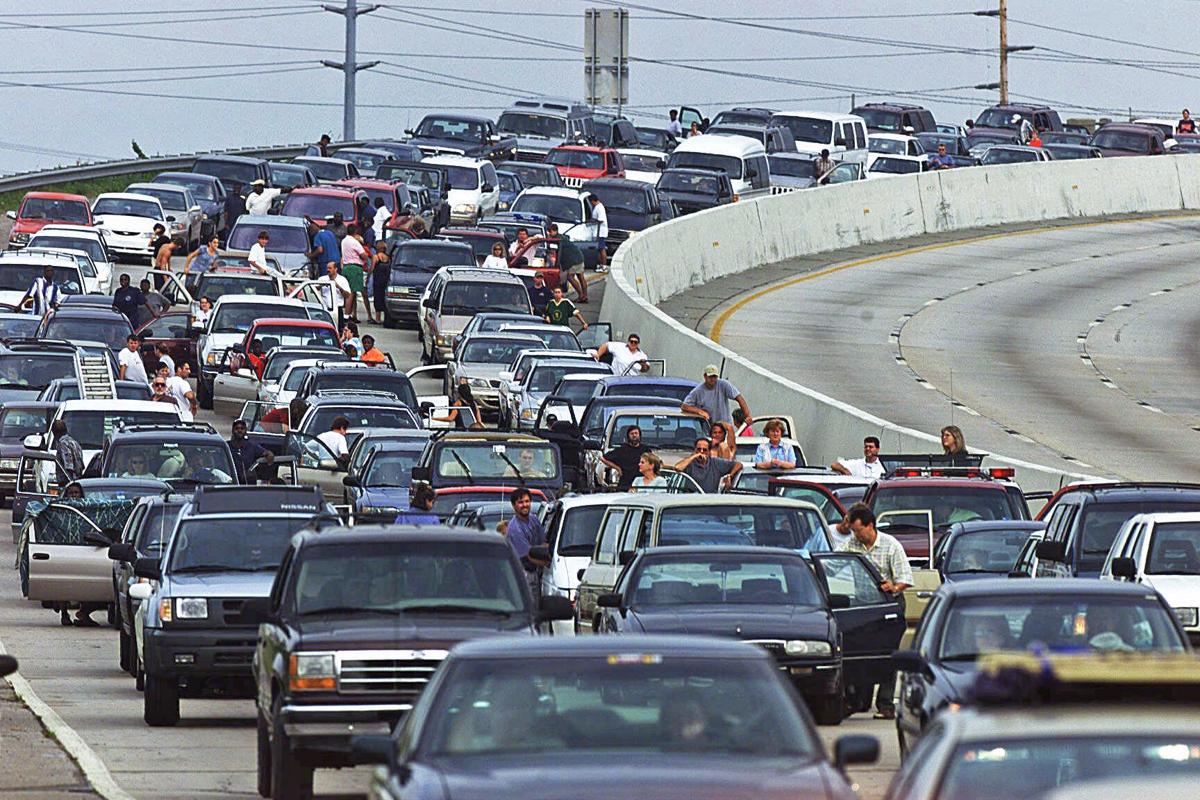 Thousands of motorists trying to evacuate from the path of approaching Hurricane Floyd were trapped in bumper-to-bumper traffic on Interstate 26 near Charleston on Sept. 14, 1999. File/AP

The south end of Pawleys Island in September 1989 after Hurricane Hugo struck. File/Staff 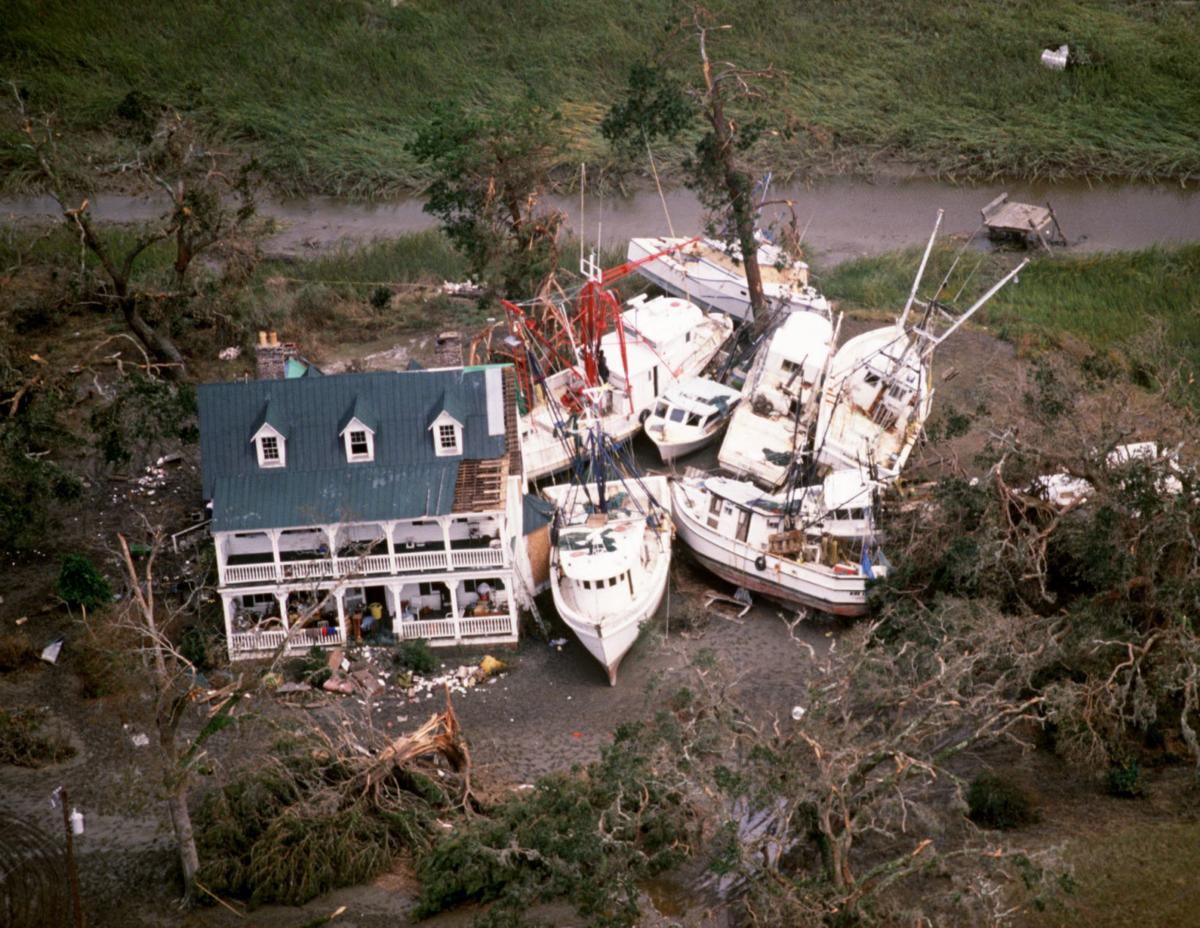 Fishing boats came to rest next to Silver Hill Plantation near McClellanville after the tidal surge of Hurricane Hugo subsided in 1989. File/Staff 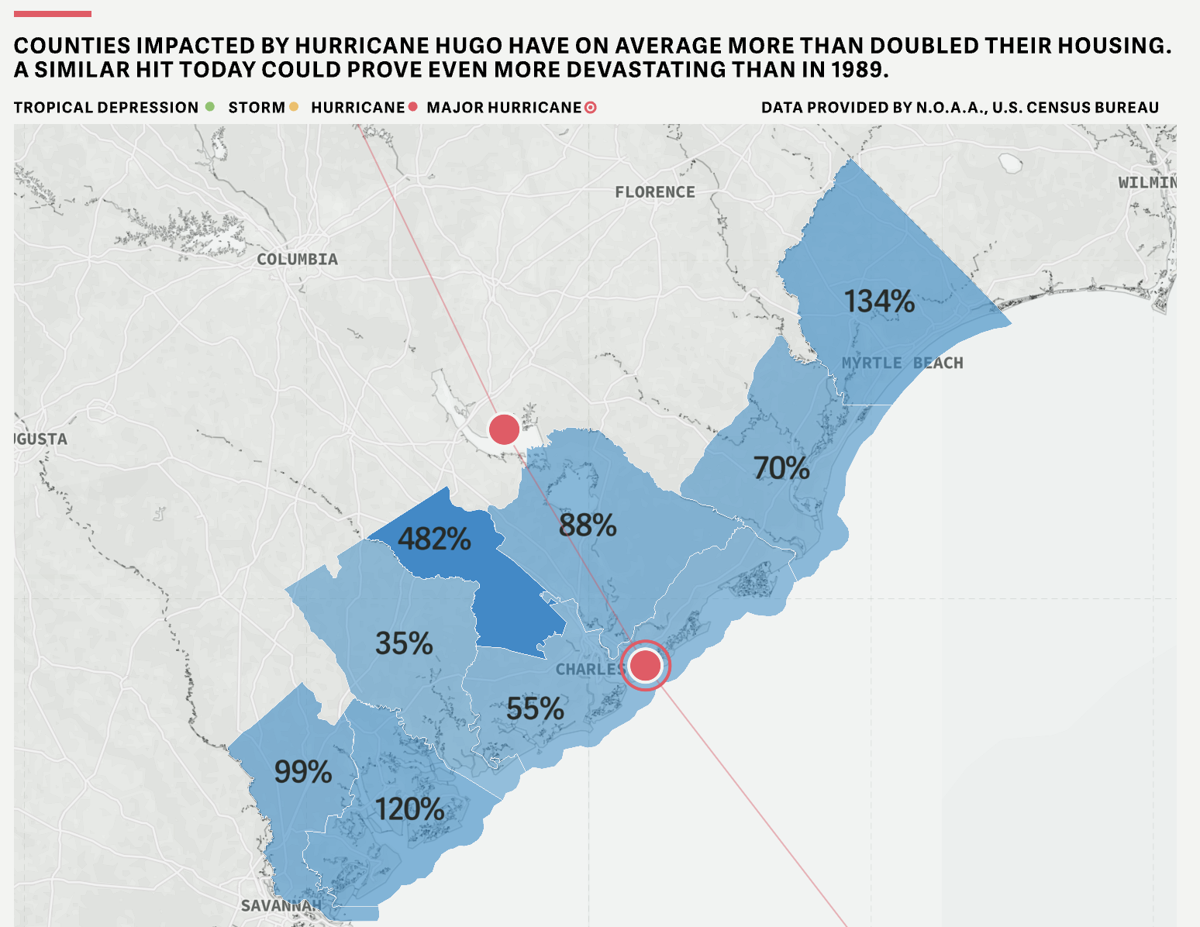 Shown above: Hugo's track and the percent change in the number of houses in coastal counties from 1989 to 2018.

The aftermath of Hugo and recovery helped fuel the growth that was to come in South Carolina. Insurance payouts meant that un-air-conditioned beach shacks were replaced with properties that were more modern, more valuable, and more costly to replace. File/Staff

The south end of Pawleys Island in September 1989 after Hurricane Hugo struck. File/Staff

In the 30 years since the deadly storm slammed into South Carolina, the population of the state's eight coastal counties has grown 76 percent, and the number of housing units has roughly doubled.

Hugo, the cyclone that landed near McClellanville in the early hours of Sept. 22, 1989, as a Category 4 storm, serves as the measuring stick for most along the coast.

Hurricane Hugo was not a direct hit but still left a staggering toll of devastation on the Charleston metro area. The damage would be nearly i…

It illustrated the terrors that can unfold when the full force of nature collides with the human-built world: Hugo lifted entire houses on Pawleys Island and transported them across marshes, raised the roiling sea as high as 20 feet above normal, damaged 80 percent of the roofs in Charleston and spawned a chain of tornadoes that ravaged the northeast section of the state.

From Puerto Rico to the Carolinas, the storm is estimated to have caused 86 fatalities.

The aftermath and recovery helped fuel the growth that was to come in South Carolina. Ample insurance payouts meant that un-air-conditioned beach shacks were replaced with properties that were more modern, more valuable, and thus more costly to replace.

The massive growth since then, revealed in a Post and Courier analysis of data from the U.S. Census Bureau and other sources, shows the vulnerability of a state that has not been hit by a major hurricane since then and the challenge that could come with mobilizing the coastal population for a full-blown evacuation.

While evacuation orders do not apply to all the area in these counties, research has shown people outside of those zones may also flee in the event of a big enough threat.

There are more than 1.3 million cars registered now in coastal counties, according to the S.C. Department of Motor Vehicles. The number of registered boats is 121,574, according to the state, and tens of thousands of them would be towed behind evacuating vehicles, adding to the linear length of any evacuation.

"When we get Hugo again, it's going to cause so much more damage because there’s so much more in the way," said Ron Morales, a meteorologist with the National Weather Service in Charleston.

Researchers at the University of South Carolina have put actual numbers to what many suspect: if a Hugo-like storm arrived tomorrow on the exact same track, it would be 60 percent more costly than 30 years ago in numbers adjusted for inflation.

Susan Cutter, who studies disasters at USC and who led the analysis, said the total could reach $16 billion. Most of that damage would happen to homes.

The estimates use 2010 Census data, meaning they likely lag behind the reality. A powerful storm on a slightly different track could inflate the damages quickly, as well. Previous modeling that pushed the eye of such a storm just south of Charleston projected that the damage could be as high as $40 billion.

Since Hugo, which at the time was the strongest storm to hit the United States in 20 years, much of the state's economic power has concentrated at or near the coast. Charleston surpassed Columbia as the largest city; multinational companies like Volvo and Boeing have located in the coastal plain; retirement communities near Myrtle Beach and Hilton Head Island have sprung up where forests used to be; and tourism has surged as more and more of the country flocks to nationally and internationally marketed Palmetto State beaches.

How would Charleston fare under a direct hurricane hit? Based on a 2014 study, not well.

Disruption from a similar storm would rob the state's workers of $120 million in wages and scuttle $1.8 billion in business activity, Cutter said.

"It gives us a reality check about what a Hugo-type of event would do to the state," she added.

Morales said he knows that picking up and leaving is inconvenient and often costly, but he worries that residents along the coast may not understand how dangerous the situation can become in a storm.

Though evacuations have been called on at least part of the coast every year since 2016, many residents are now skeptical of those mandates after several near-misses. A 2011 survey of public attitudes about evacuation also showed that many people assume they will be relatively unscathed in a Category 1 or 2 storm, and would decline an evacuation order.

Researchers sent out more than 15,000 mailed surveys and got answers from almost 3,300 respondents. The results showed a lack of concern over storms that rank lower on the impact scale.

"I think that finding kind of 'freaked' emergency management out, because a Category 1 or 2 storm can do a lot of damage," said Cutter, who worked on the survey.

In one example, Gov. Henry McMaster ordered evacuations in all of the Horry County zones vulnerable to surge before Hurricane Florence approached in 2018. The county has seen some of the most dramatic growth in the past 30 years as it becomes the locus of South Carolina's expanding retiree population: an approximate 145 percent surge in people, and a 134 percent increase in homes, per census estimates.

County Emergency Management Director Randy Webster estimated that only about half of those ordered inland actually left last year, however.

Resistance to evacuations comes with every storm, including Hugo itself. But while 7 in 10 are estimated to have left then, only 5 in 10 left across the state in advance of Dorian, officials estimate.

“It seems to me the governor has to make a decision and a lot of people don’t heed it. It’s terrifying to think a lot of people could get trapped if something like Hugo stalled over Charleston the way Hurricane Dorian did over the Bahamas,” said Anthony Stith, the Sullivan's Island Fire Chief.

By the time The News and Courier was published on Sept. 21, approximately 24 hours before Hugo landed, then-Gov. Carroll Campbell had not yet ordered an evacuation. One was expected by 6 a.m.

Local officials had already warned that Charleston County needed to be vacated. The voice of that storm might have been Charleston County Council Chairwoman Linda Lombard, who issued several dire warnings on the eve of the hit.

Partly because of Lombard’s warning, nearly all the residents of Sullivan’s Island evacuated, Stith said.

He huddled in the town fire station with a crew of his firefighters as the eye closed in on the island, until he heard just before the midnight landfall that a predicted 8-foot storm surge had been raised to 20 feet or more.

With the winds screaming and the rain thrashing, it was time to go.

“I gave everybody a life jacket and we caravaned over the (Ben Sawyer) bridge,” Stith said.

Today, mobilization of many more residents, vacationers, medical patients, cars, boats and campers mean an evacuation would never begin that close to landfall.

Under the state evacuation plan, the governor must make the call 72 hours ahead of a prospective landfall, if she or he can. At 36 hours, the evacuation gets underway, though it can start earlier.

There's also the lane reversals on Interstate 26 and other major routes, a strategy put into place to help congestion, and refined after Hurricane Floyd in 1999. Drivers then suffered through 20-hour-plus trips.

That process still hasn't been tested by the prospect of a major hurricane bearing down on the coast as Hugo did three decades ago. Governors these days err on the side of caution when calling evacuations, but emergency managers across the state still worry that much of the population will be jaded when The Big One arrives.

That worry will be studied next year as South Carolina again polls its residents about attitudes toward evacuation.

We wondered what would happen if a storm like 2017's Harvey hit SC. Here's what we found.

Imagine a storm with the shredding power of Hurricane Hugo — only angrier — tearing through South Carolina.

When that storm comes, it will test decades of building, much of it infringing on wetlands, marshes, rivers and oceans, as the crush of new arrivals leads developers to marginal lands.

Cutter said her work estimating the many billions in damages that could come shows that "we need to build better and we need to build so that we’re more resilient to these impacts."

There may not be much more time to prepare. Statistically, a major hurricane makes landfall in South Carolina roughly every 30 years.

Hurricane Hugo slammed into the South Carolina coast as a Category 4 hurricane overnight on Sept. 21, 1989.