Charleston County and several cities in South Carolina have sued a number of short-term rental companies, alleging the businesses failed to pay taxes to the local governments in recent years.

The lawsuit, which was filed in Charleston County court on April 9, targets industry giants including Airbnb, Vrbo and FlipKey, as well as smaller short-term rental businesses operating out of South Carolina.

SC's Airbnb listings grew during the pandemic, especially in 1 destination

Those towns and cities, along with Charleston County, accused the companies of sidestepping local accommodations and business license taxes even as the businesses controlled the payment systems for the short-term rentals in those areas.

Airbnb, Vrbo and FlipKey either declined to comment for this story or did not return emails from The Post and Courier.

This isn't the first time the companies have faced lawsuits for allegedly refusing to pay local taxes, however. Similar lawsuits have been filed all over the country of late, including a case that was leveled against Airbnb in Georgia last year.

Airbnb and Tripadvisor, the parent company of FlipKey, both noted the risk of such lawsuits in their annual financial reports, which were filed with the Securities and Exchange Commission earlier this year.

"We are currently involved in a number of lawsuits brought by certain states and localities involving the payment of lodging taxes," Airbnb explained to the company's investors. "These lawsuits are in various stages and we continue to vigorously defend these claims."

2020 was devastating for SC tourism, but short-term rentals may have softened the blow

"Several states and other taxing jurisdictions have presented or threatened us with assessments, alleging that we are required to collect and remit certain taxes there," Tripadvisor noted in its annual report. "While we do not believe that we are subject to such taxes and intend to vigorously defend our position in these cases, we cannot be sure of the outcome of our discussions and/or appeals with these states." 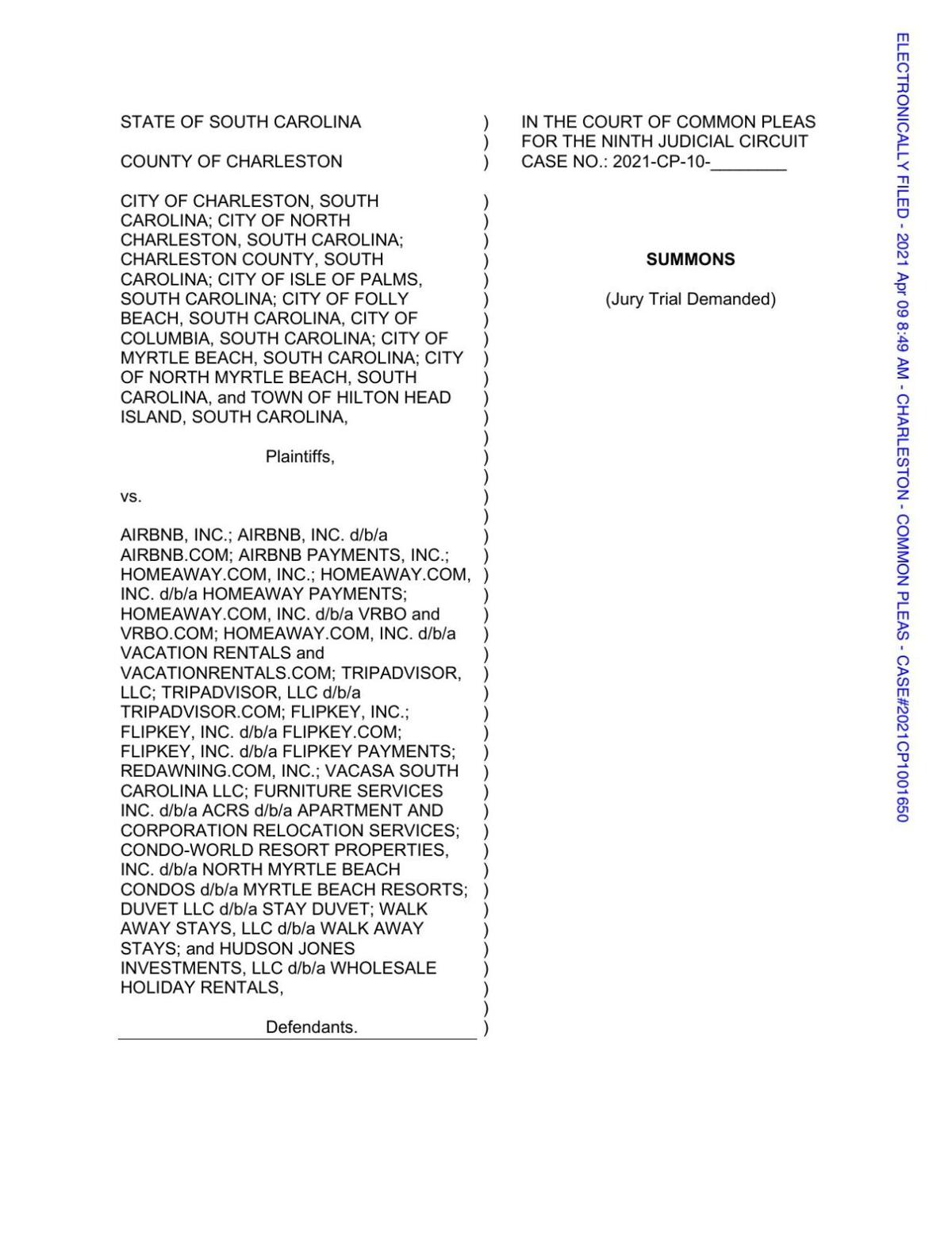 It's unclear at this point how much money the short-term rental businesses would be required to pay if they lose the lawsuit in South Carolina.

The lawyers who are representing the local governments asked the court to perform a "full accounting" of how many local rentals were arranged by each company in recent years. The local governments also want to calculate how much the businesses would owe in late fees for allegedly shirking those taxes in the past.

Jesse Kirchner, one of the attorneys representing the local governments, said the goal of the lawsuit is to bring the companies into compliance with the local tax ordinances in South Carolina.

"We believe they are obligated to pay them," said Kirchner, who operates his practice out of Charleston.

Kirchner and the other attorneys involved in the case — Ronald Bonds and Michael Saunders — are working on contingency, according to the city of Charleston. That means they won't make any money unless they win the lawsuit for the cities and county.

In Charleston, it's an office renter's market as COVID-19 creates a glut of space

This isn't the first time Kirchner and Bonds filed a lawsuit against companies for not paying local taxes in South Carolina. Both of the attorneys helped lead a lawsuit that was filed in 2014 against travel companies like Expedia, Travelocity and Priceline.

That lawsuit led to a multimillion dollar settlement for the local governments that participated in the case.

The complaint filed against the short-term rental businesses, Kirchner said, includes some of the same claims and legal arguments as that earlier case.