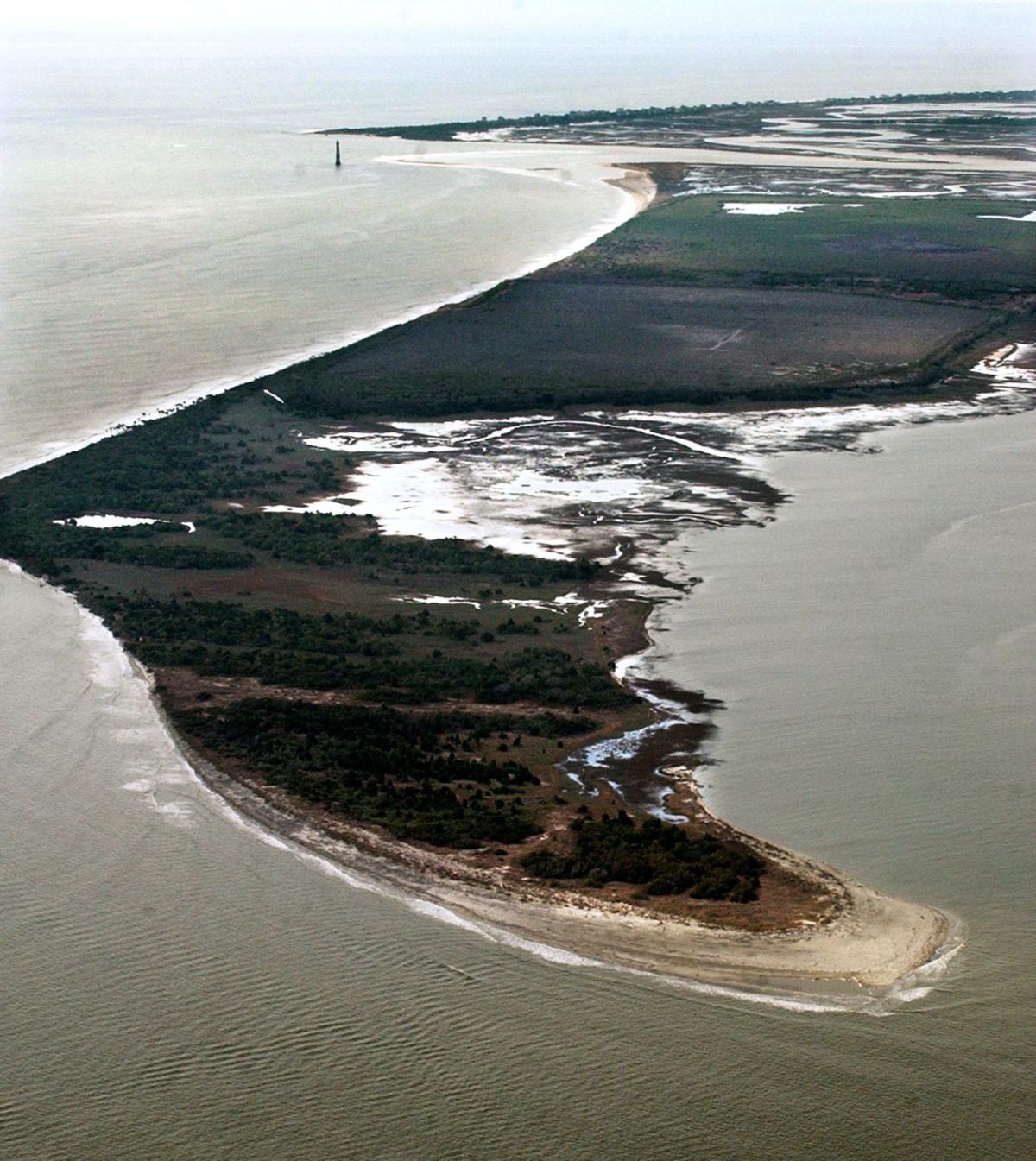 Uninhabited Morris Island sits at the mouth of Charleston Harbor. The Morris Island Lighthouse can be seen in the distance in the water near Folly Beach at top. A Charleston-area man who owns a small parcel on Morris Island wants to build a house on the side facing the Atlantic Ocean, left.  File/Brad Nettles/Staff

An undeveloped barrier island at the mouth of Charleston Harbor without any road access or utilities is being eyed for a new four-bedroom home.

Sam Felkel with Yelsen Land Co. of Goose Creek, which lost a lengthy court battle against South Carolina and the State Ports Authority in 2012 over several hundred acres Yelsen laid claim to on Morris Island, recently applied to state environmental regulators for a septic system permit on a nearly 6-acre parcel the firm still owns south of Cummings Point.

The application calls for a private well as the source of water on the triangular parcel of upland hugging the Atlantic shoreline.

Felkel said the site would make the perfect getaway.

"I don't know of a better use for it," he said. "It would be a one-of-a-kind place. It would be very exclusive."

"Building a house with a septic system on an uninhabited barrier island that is eroding and has no infrastructure is a bad idea," said Laura Cantral, executive director of the League.

"The climate is changing more rapidly than anyone thought — evidenced by rising sea levels and more frequent and intense storms," she said. "This means it is more important than ever that we protect people and natural landscapes, and it also demands we raise the bar for development in vulnerable coastal areas and on our fragile islands. That includes Morris Island."

Cantral went on to say, "The island is inaccessible, which prohibits emergency services, and it’s also zoned to protect its conservation value by city officials."

The city of Charleston owns the 117-acre Cummings Point on the north end of Morris Island while the state owns the remaining 2,100 acres of undeveloped land to the south. The State Ports Authority uses some of the site for dredge disposal. Felkel's property, as well as the rest of the island, lies in the city of Charleston.

The land is zoned for conservation use, which the city describes as "intended primarily to protect and encourage the appropriate use of marshlands, forested areas, scenic areas, and agricultural areas that are not likely to be developed for urban purposes in the near future."

Spokeswoman Chloe Field said the city has not seen an application specific to the site, but she outlined some of the parameters that would have to be met to develop a project in a conservation district.

Those include the requirement of an acre and a half of high land to build a single-family dwelling; the completion of an evaluation to determine how the property would be served by utilities, including water, waste and electricity; and a separate evaluation by fire officials to determine how fire protection would be provided.

Felkel said he expects to meet all of the government entities' specifications, but his permit request to the state remains in limbo, according to state environmental regulators.

"The application hasn't been activated by the applicant, and no action will be taken by the department until it's been activated," according to a statement from the state Department of Health and Environmental Control.

"For an onsite wastewater system permit application to be activated, several actions must be taken by the applicant, including requirements like physically preparing the site by marking or flagging property corners, clearing vegetation and providing a property sketch and a copy of a plat or deed," DHEC said.

Felkel said the property is being surveyed to meet DHEC's requirements, and he hopes to start construction as soon as he gets the go-ahead.

As for an energy source, Felkel said he is exploring several options, including alternative green energy and "maybe even something with Dominion (formerly South Carolina Electric & Gas Co.)."

The nearest power lines are on James Island to the west of the property, according to Felkel.

He pointed to different methods of acquiring potable water, including reverse salinization, which he called more affordable now with improvements in the process.

As for access to the site, Felkel said he and a business partner are considering options.

"We are looking at several avenues — boat or helicopter," he said.

Yelsen Land began as a company associated with St. Elmo “Speedy” Felkel, who bought the Cummings Point land and the Morris Island Lighthouse in 1967 for $25,000. The seller was Preston Richardson, who bought the properties from the federal government two years earlier for $3,333.

Felkel acquired, not only the lighthouse and Morris Island, but also the historic Angel Oak on Johns Island. It was Felkel’s idea to put a fence around the enormous tree and charge people to see it.

The Angel Oak, the lighthouse and most of Morris Island were later acquired by others through foreclosure or delinquent tax sales. There is no fee to see the tree.