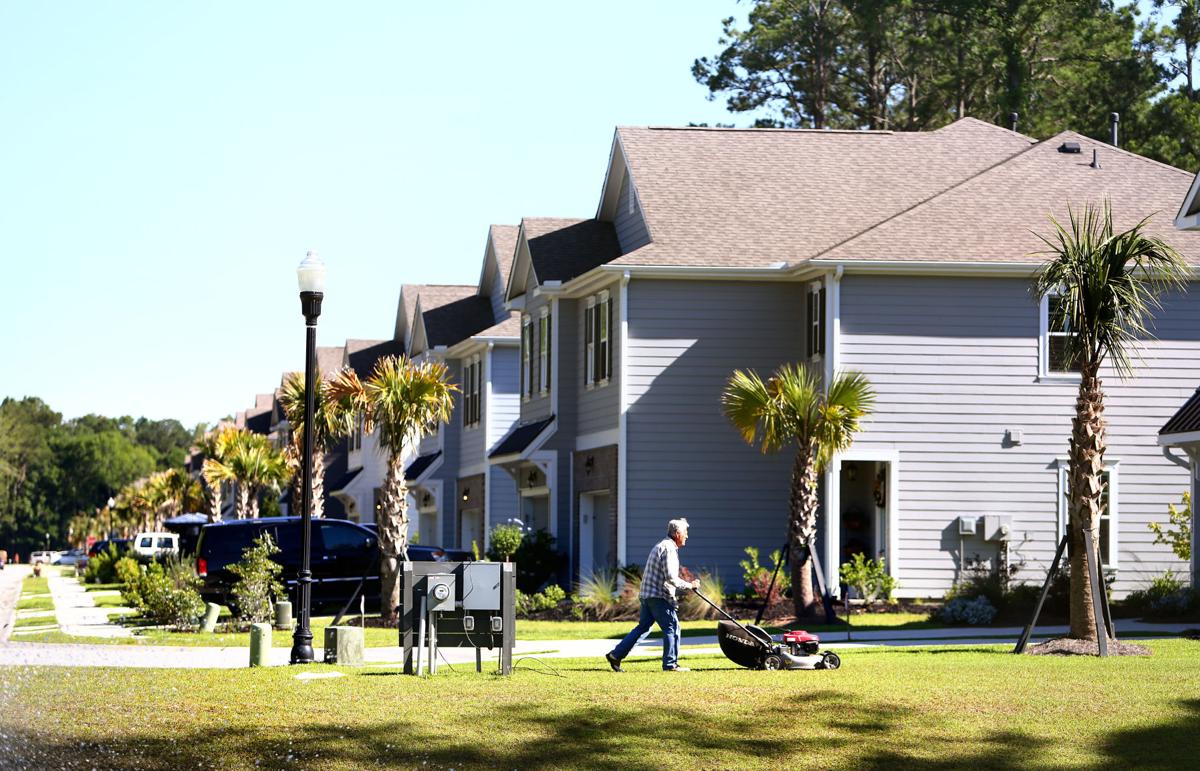 The townhouse development of Avian at Park West was central in the dispute between the developer and the town of Mount Pleasant that resulted in a lawsuit and recent settlement. Wade Spees/Staff 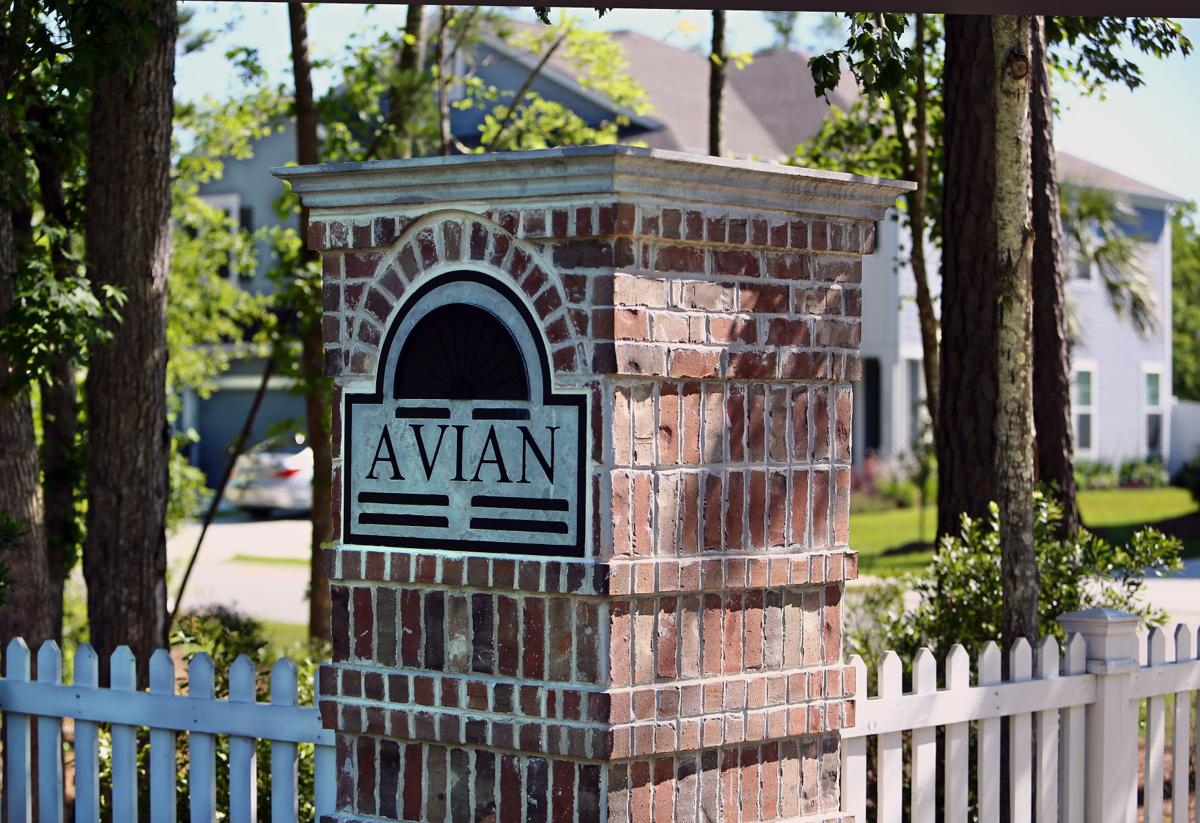 Avian at Park West, a 44-unit townhouse development in northern Mount Pleasant, was central in the dispute between the developer and the town that resulted in a lawsuit and recent settlement. Wade Spees/Staff 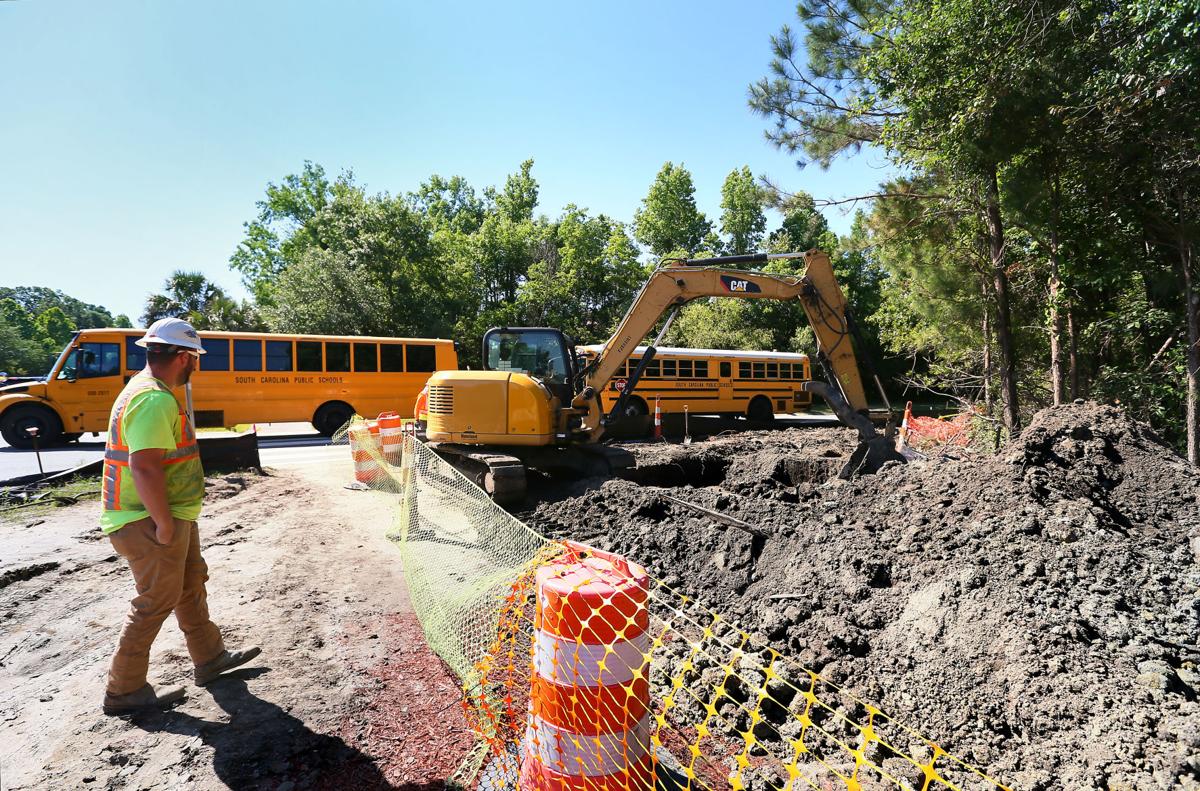 Increasing the capacity of the sewer system is proceeding along Park West Boulevard at Thomas Cario Boulevard in northern Mount Pleasant. The construction site is near three schools in the area where a Park West developer recently donated land that the town intends to transform into a roundabout to help with traffic flow in the area. Wade Spees/Staff 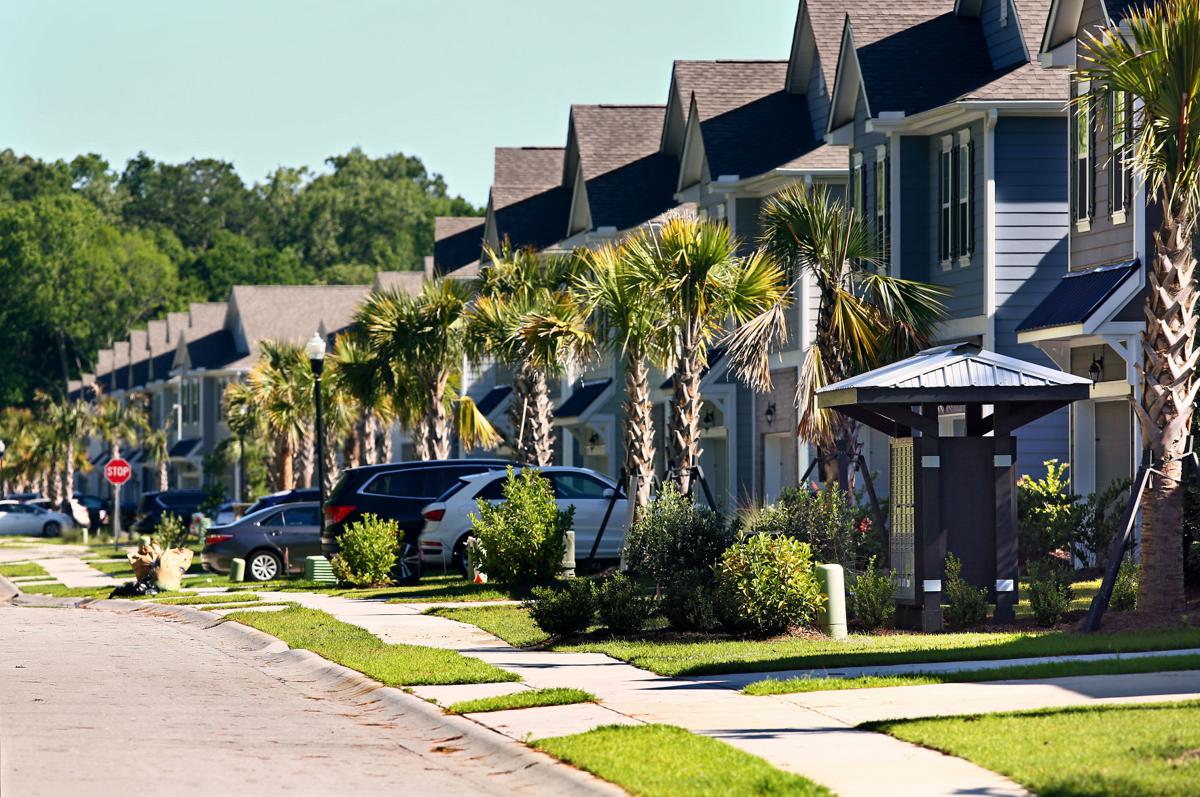 Avian at Park West consists of 44 townhouses and was central in a long-running dispute between the developer and the town of Mount Pleasant. Wade Spees/Staff 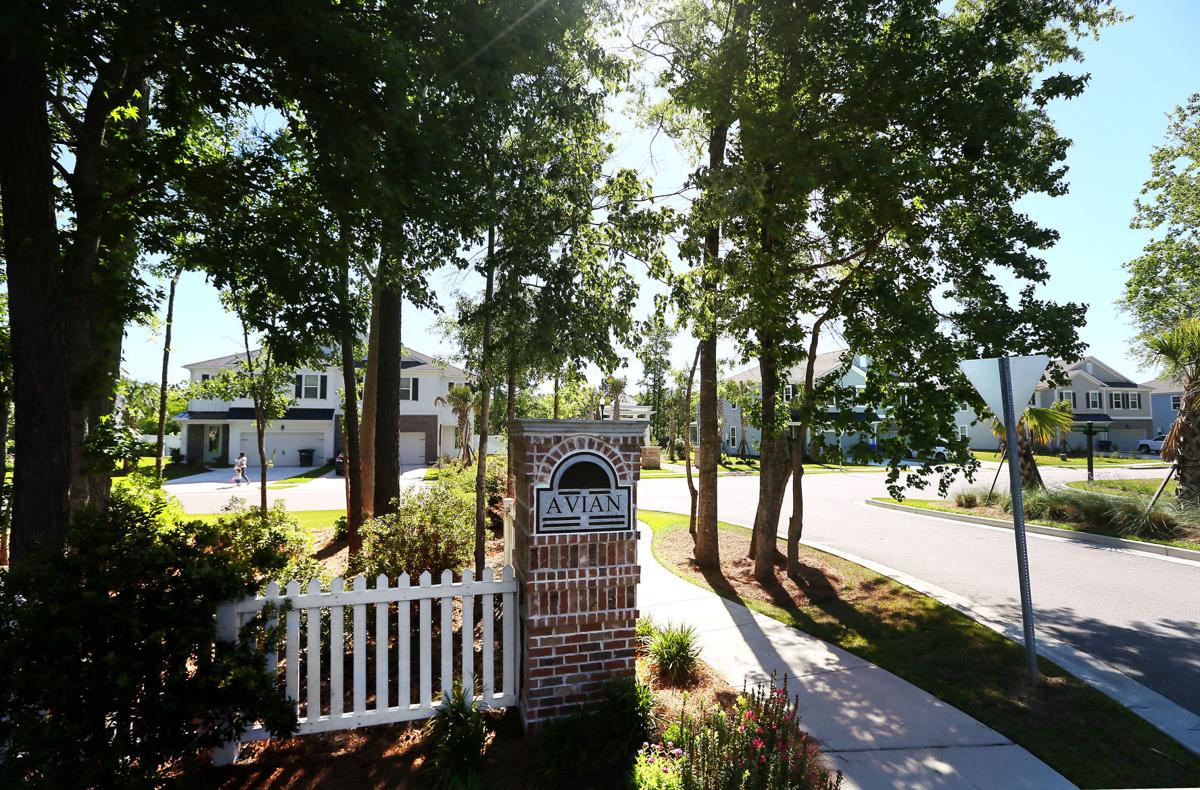 Townhouse development Avian at Park West consists of 44 units built as duplexes near the edge of Mount Pleasant Regional Airport. The complex was central to a lawsuit and recent settlement between the developer and the town. Wade Spees/Staff

The townhouse development of Avian at Park West was central in the dispute between the developer and the town of Mount Pleasant that resulted in a lawsuit and recent settlement. Wade Spees/Staff

Townhouse development Avian at Park West consists of 44 units built as duplexes near the edge of Mount Pleasant Regional Airport. The complex was central to a lawsuit and recent settlement between the developer and the town. Wade Spees/Staff

The bustling Charleston suburb of Mount Pleasant will see more than 2,000 fewer homes under a $2.6 million payout and land donation agreement worked out from a long-brewing development dispute.

Many of the lots could not have been built anyway since there wasn't enough developable land left in the Park West subdivision.

The town will pay $2.6 million to Columbia developer Park West Development and townhouse project Avian at Park West in exchange for the developer agreeing to slash the number of housing units planned for the master-planned community by 2,030, donating 350 acres for open space and giving the town two small parcels for traffic improvement.

"It took several years to resolve, and we finally worked out something that was acceptable to us and to them," said Kevin Steelman, president of Park West Development. "We were able to resolve the matter so both parties could move on."

Park West is a 1,250-acre tract carved out of the greater Dunes West development in 1996.

It was approved for 5,281 residential units based on its part of the original 1990 development agreement for Dunes West, but a disagreement ensued between the town and developers in late 2014. The dispute was over a proposed townhouse project on nine acres within the development and who had control over where the 49 units could be built.

Park West Development maintained that under the 1990 planned development agreement it could shift projects around on the large tract as long as it did not exceed the allocated number of housing units.

Mount Pleasant countered that the agreement never gave the developer a blank slate to do as it pleased, saying  changes to a planned development district must be made by ordinance through Town Council.

When the project was proposed for land beside Mount Pleasant Regional Airport, concerns were raised over traffic safety, proximity to the airport and density problems in the area. The town denied the request in early 2015.

An impasse developed and the dispute wound up in court later that year, when the developer and Avian sued the town for damages related to financial losses incurred from not being able to develop the property as they thought they could.

Under an agreement worked out earlier this year between the town and the developer, the original 5,281 residential units have been slashed to 3,251 houses. The developer has used 3,136 of the units, leaving 115 on the table. Park West Development no longer owns any of the land, having sold it off over the years, Steelman said.

Also part of the settlement, the company is donating 350 vacant acres to the Park West Master Association to be preserved as open space while also handing over two parcels totaling 19 acres to the town for public access and traffic improvements near Laurel Hill County Park and a cluster of elementary schools off Park West Boulevard.

DeMoura said the reduction in housing units became part of the settlement because the developer "couldn't reach those numbers anyway," since some of the donated 350 acres is wetlands. Steelman called some of the property "buffers" as well, but said there were still parts that could be developed.

Where three schools are just south of the townhouse project — Laurel Hill Primary, Pinckney Elementary and Cario Middle — about 13 acres inside a loop road to the schools and across the street are being given to the town. DeMoura said a roundabout is planned to help with traffic flow near the three busy schools.

Steelman said the donated land near the schools was not part of the litigation, but the town was talking about widening Park West Boulevard and maybe installing a roundabout, so they donated the property to help with traffic congestion and made it part of the settlement agreement.

The other six-acre donation is next to Laurel Hill County Park off Bessemer Road on the northwest side of the park parcel.

Avian now consists of 44 townhouses next to the airport. Steelman said they were allowed to be developed as 22 duplex buildings under zoning regulations while litigation was underway instead of different buildings with 49 townhomes that were originally proposed.

"We went forward with the development of an alternative plan to mitigate our damages," Steelman said. "The town allowed the duplexes because they were permissible under ... zoning. We just went forward with what they would allow."

The town has already signed off on the deal, but since it involves a change in the development agreement from nearly 30 years ago, the town has to approve it by ordinance, according to DeMoura.

Steelman said the ordinance change cleans up any conflicts that could arise down the road in Park West.

The measure will make its way to the town Planning Commission May 22 for a public hearing and a vote. From there, it will go the Planning Committee and then onto Town Council for two votes.