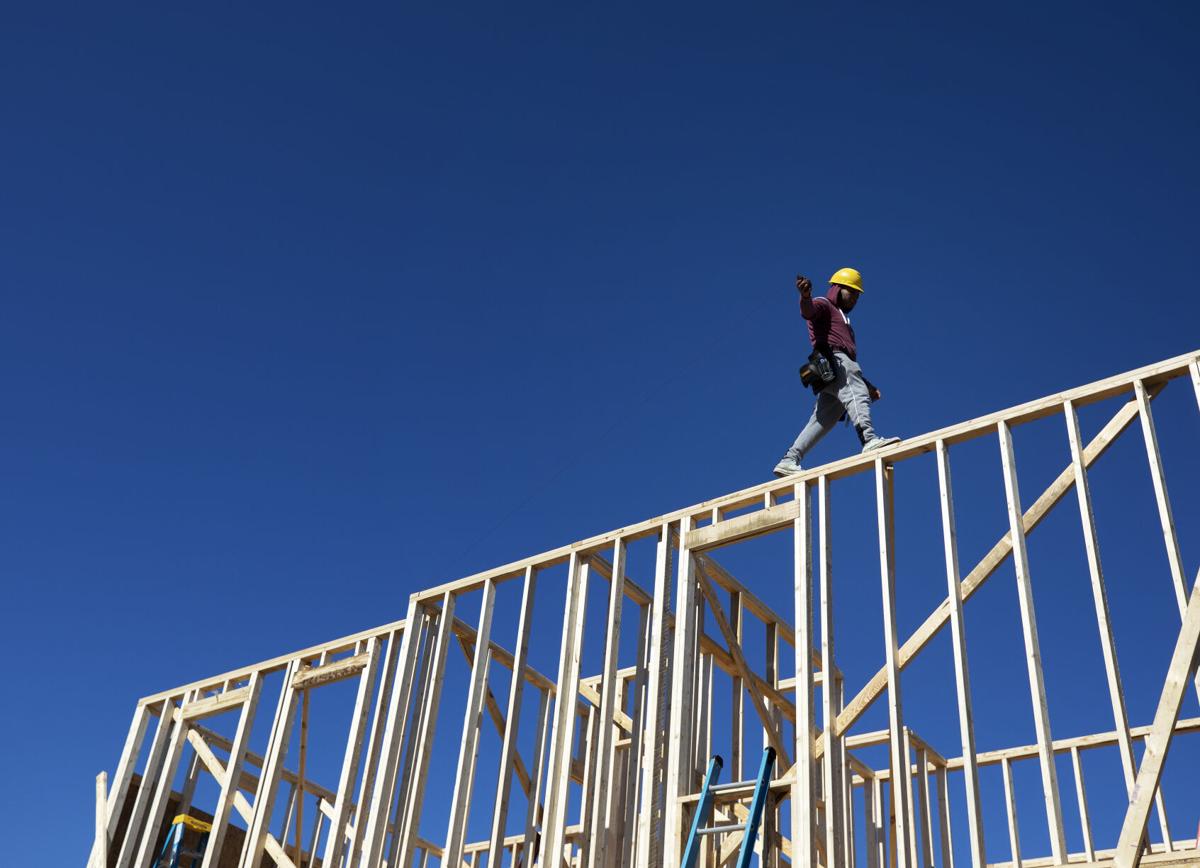 Construction crews frame new homes with lumber in Nexton’s Brighton Park Village neighborhood on Feb. 2, 2021. The cost of lumber has gone up amid the pandemic, resulting in higher home prices. Grace Beahm Alford/Staff 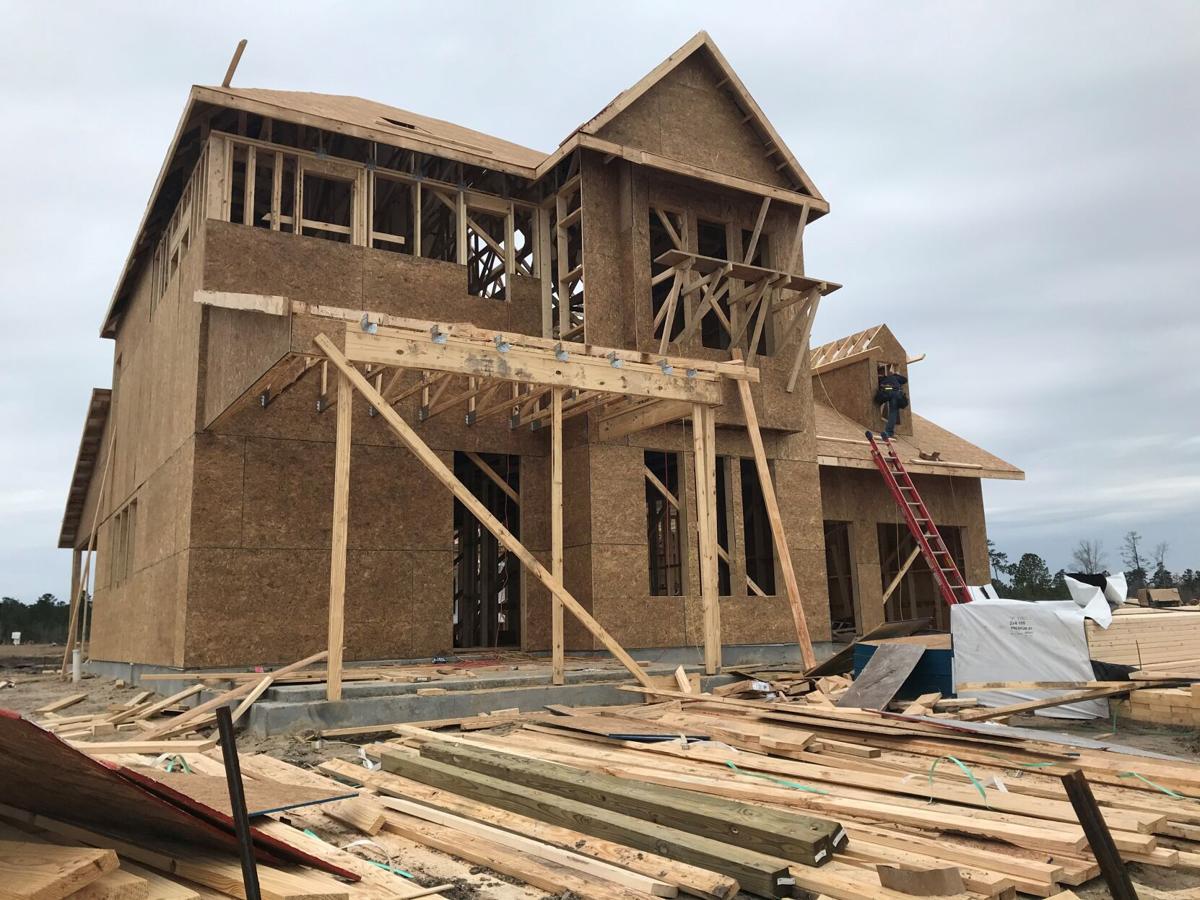 Workers construct a new home in the Carnes Crossroads neighborhood of Goose Creek. Lumber prices have more than doubled since the start of the pandemic, driving up the price of a typical home by an additional $16,000. Warren L. Wise/Staff 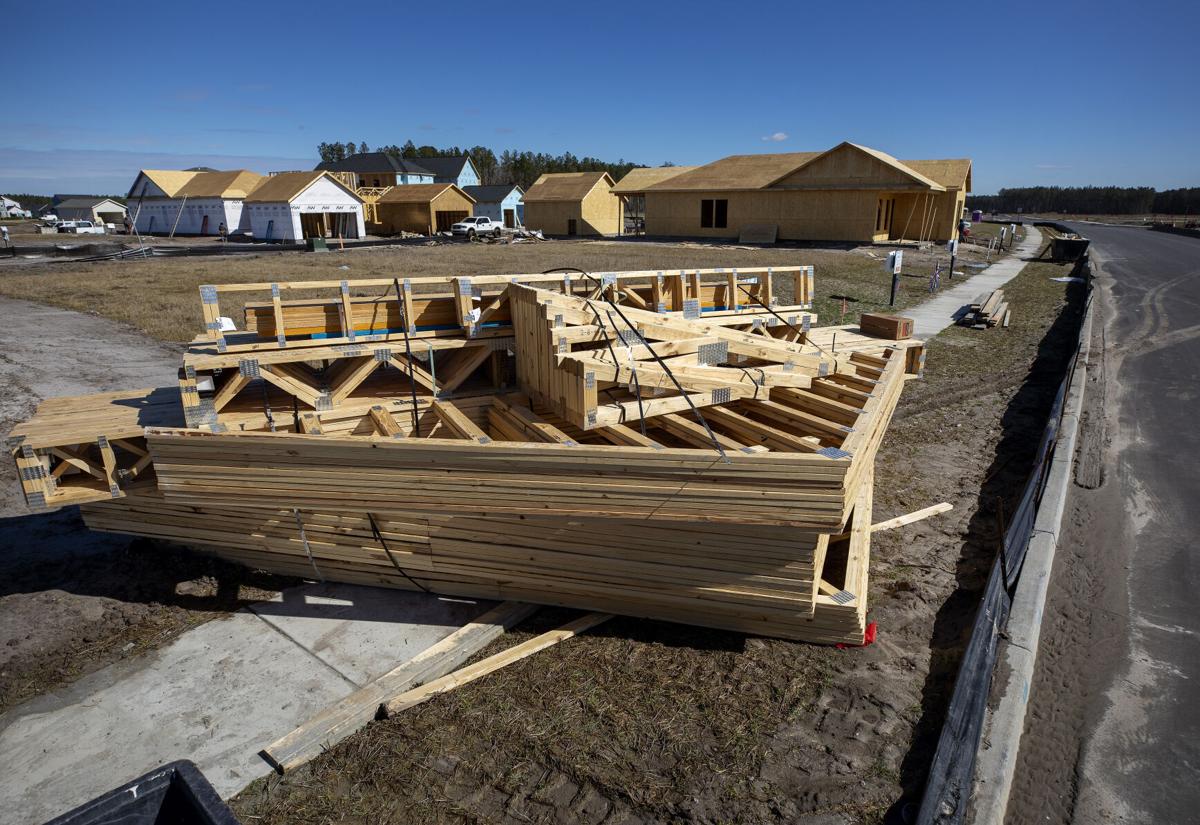 The lumber to frame a new home is stacked on Blueway Avenue in the Nexton community near Summerville. Grace Beahm Alford/Staff 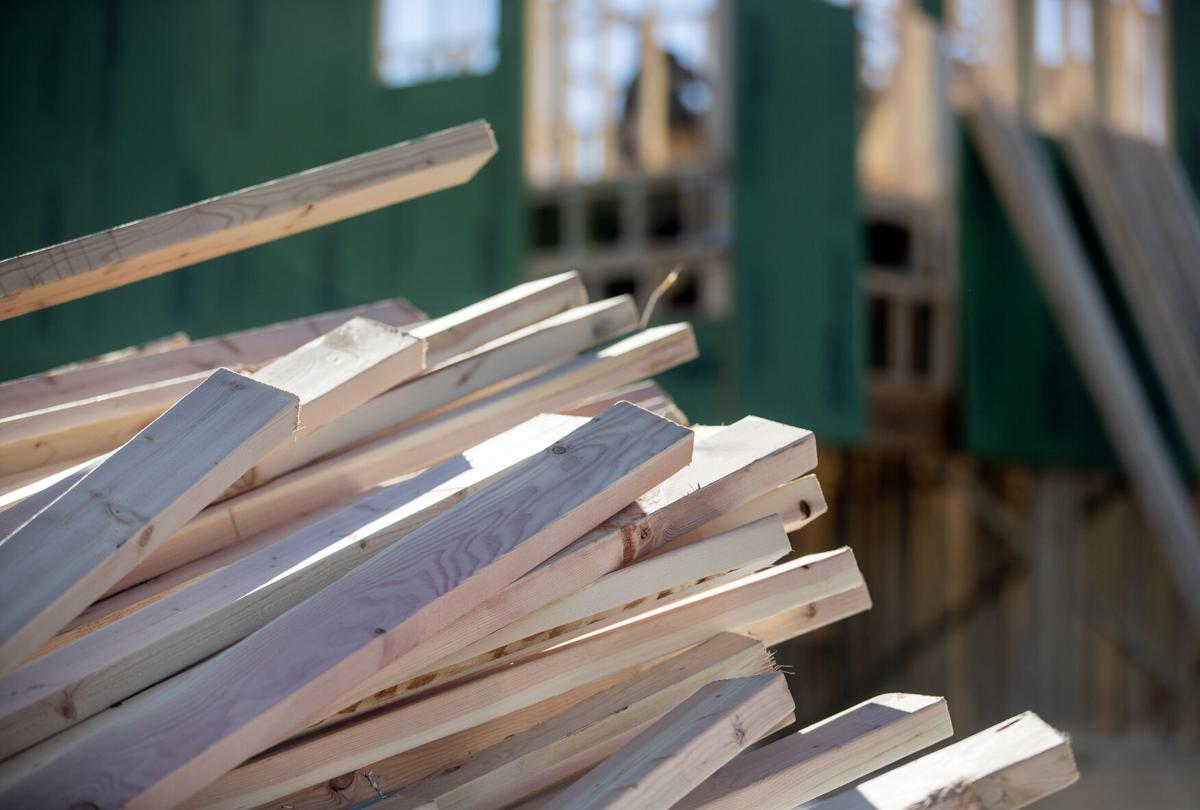 A pile of lumber will soon become the framework for a home in the Brighton Park Village neighborhood of the Nexton community near Summerville. Grace Beahm Alford/Staff

The price of a new home was already escalating before the COVID-19 pandemic, but some side effects from the virus are tacking several thousand more dollars onto the tab.

It started with the government-ordered shutdown of many businesses last spring, including lumber mills. Then, do-it-yourselfers fueled an unexpected surge in home-improvement projects. Finally, demand for new housing shot up, particularly in the latter half of 2020.

It all coalesced in short order, driving the price of wood through the roof.

The average cost for 1,000 board feet of lumber in January 2020, before the pandemic, was around $400, according to tradingeconomics.com. During the height of the lockdown in April, when demand nearly evaporated, the price dipped well below $300.

Home projects started eating into sales-floor stocks in the spring and summer, when travel and other entertainment restrictions were still in place.

"A lot of people started building a fence or a deck and that further cut into the supply that was available," said Eddie Buck, owner of Buck Lumber Co. in Charleston.

The pickup in the housing market accelerated as lockdowns were gradually lifted by late spring, fueled in part by rock-bottom mortgage interest rates.

The National Association of Home Builders has estimated that a typical wood-framed single-family house uses nearly 16,000 board feet. That translates into a nearly $16,000 increase for a 2,000-square-foot dwelling, the group said.

Michael Broadhead can attest to the volatility. Last spring, he and fiancée Heather Swan locked in on the nearly $485,000 price for a new home being built in the Nexton master-planned community on the edge of Summerville.

Fortunately, their budget wasn't affected, even as lumber prices jumped later in 2020.

"We didn't have an escalation clause in our contract," Broadhead said. "If we did, I was told we would have paid an additional $15,000."

It used to be that builders mostly absorbed the expense risk for lumber. Not any more.

"Now many of them have an escalation clause for materials," said Patrick Arnold, executive director of the Charleston Home Builders Association. "For instance, if the price goes up on lumber, you (the buyer) could be paying more since you will be on the hook for it."

The latest housing data bears out the higher housing costs.

For all of 2020, the median price of a home jumped to $334,000 in the U.S., about $14,000 more than the year before, according to estimates from the Federal Reserve Bank of St. Louis based on information from the U.S. Census Bureau and the Department of Housing and Urban Development.

Some of the gains can be attributed to rising demand from buyers taking advantage of record-low borrowing costs. Broadhead and Swan were among that group.

"We are paying about the same amount now that I was on a 2,600-square-foot home I owned ... when my interest rate was 5 percent," said Broadhead, who previously lived in Goose Creek.

Growing demand for brand-new homes also is trickling down to the lumberyard.

A recent report from the National Association of Home Builders shows that during the final three months of 2020, 41 percent of prospective buyers were looking for a newly constructed house, more than twice the number from a year earlier. At the same time, the share of purchasers interested in an existing residence fell to 30 percent from 40 percent.

Some of that decline can be attributed to the low number of properties on the market, either because of the sales jump or a hesitation among some sellers to open their homes to strangers during a pandemic.

In South Carolina, residential inventory levels plummeted nearly 37 percent last year to less than 17,000 homes. Five years ago, nearly twice as many were listed for sale.

In the Charleston area the decline has been even more severe. Less than 2,500 homes were available at the end of last year, down nearly 56 percent from the same period of 2019.

"Demand has not gone down," said Arnold of the Charleston homebuilders' group. "That's for sure."

Some relief appears to be on the way in terms of lumber prices. They're projected to dip slightly by late March and fall to around $730 per 1,000 board feet by early 2022, according to Trading Economics.

One reason for the anticipated decline is that mills should be producing more as the pandemic eases and vaccines are made more available. At the same time, owners of existing homes are likely to feel more comfortable about selling, which would lower demand for new construction.

"It will take several months for production to ramp back up," Arnold said. "I am expecting good relief in prices in the third quarter."

He added that the Charleston region will continue to see high interest for housing. The exception could be for starter homes, because the virus has hurt buyers in that segment of the market more than others, he said.

In the near term, demand for lumber and other wood products will probably remain elevated, said Bryan Smalley, president of the Southeastern Lumber Manufacturers Association, a Georgia-based trade group representing about 80 companies with nearly 100 sawmills from Maryland to Texas.

"There are no new mills coming online, and we won't see much of an increase in production," he said.

Smalley said it's also not an ideal time to add more work shifts because of the coronavirus.

But he, too, thinks the price of lumber will ease as 2021 goes on, as vaccination efforts expand and as mills shift production into a higher gear.

Buck, the Charleston lumber company owner, said any relief will be limited.

"Unfortunately, I see prices staying up until we have a real economic slowdown," he said.

Buck said the price volatility is creating cash-flow pressures throughout the lumber supply chain, requiring businesses like his to be selective about their purchasing decisions.

Buck said the price of other materials, such as windows, is expected to rise, too, as stocks for those products remain low.

The National Association of Home Builders believes federal action is required to alleviate the lumber shortage and deescalate prices.

John Fowke, the trade group's chairman, sent a letter to President Joe Biden in late January urging him to prod domestic mills to ramp up production, work with Canada on a new softwood lumber agreement and end tariffs on Canadian imports.

"Sharp increases are unsustainable, particularly in light of a continued housing affordability crisis," Fowke said of prices. "Housing’s potential to lead the economy forward is limited as long as lumber remains expensive and scarce."