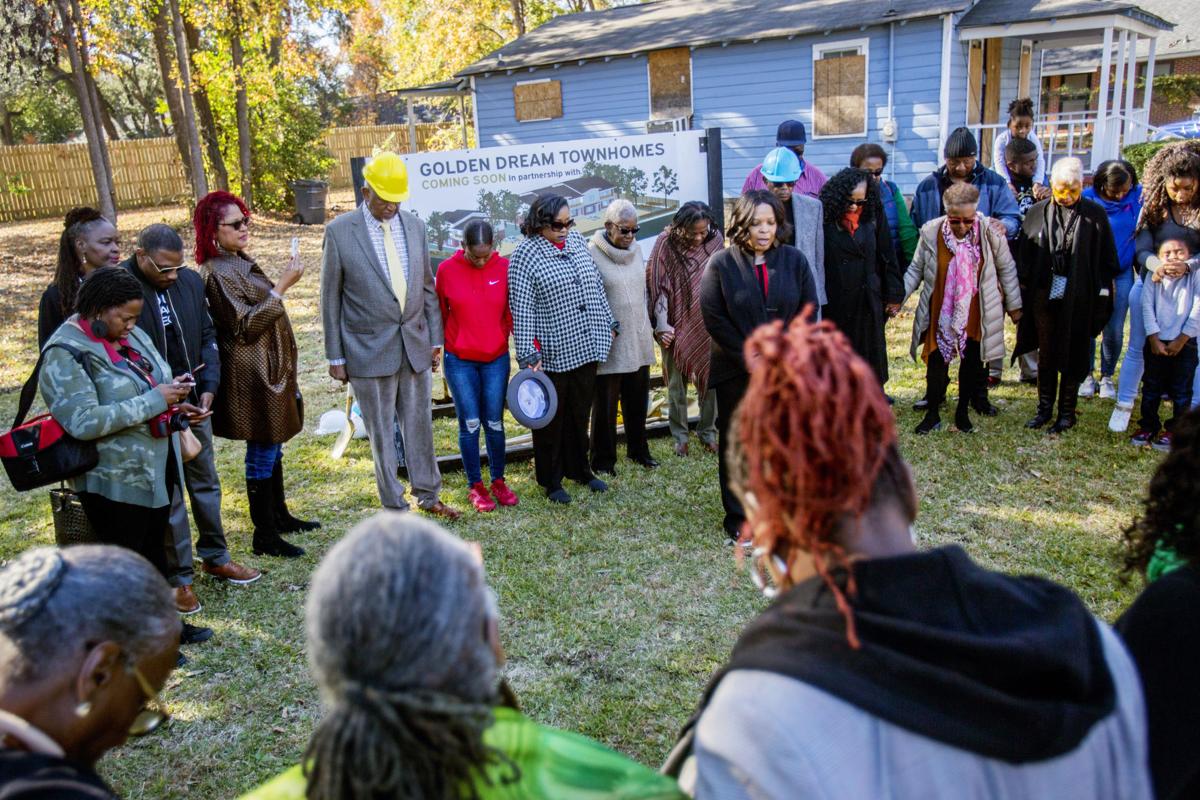 A crowd stands in a circle, including members of the Lecque family, for a prayer after the groundbreaking of the Golden Dream Townhomes project in North Charleston's Liberty Hill neighborhood on Friday, Nov. 29, 2019. The Lecque family leased the land to Metanoia to build affordable housing in the area. Gavin McIntyre/Staff 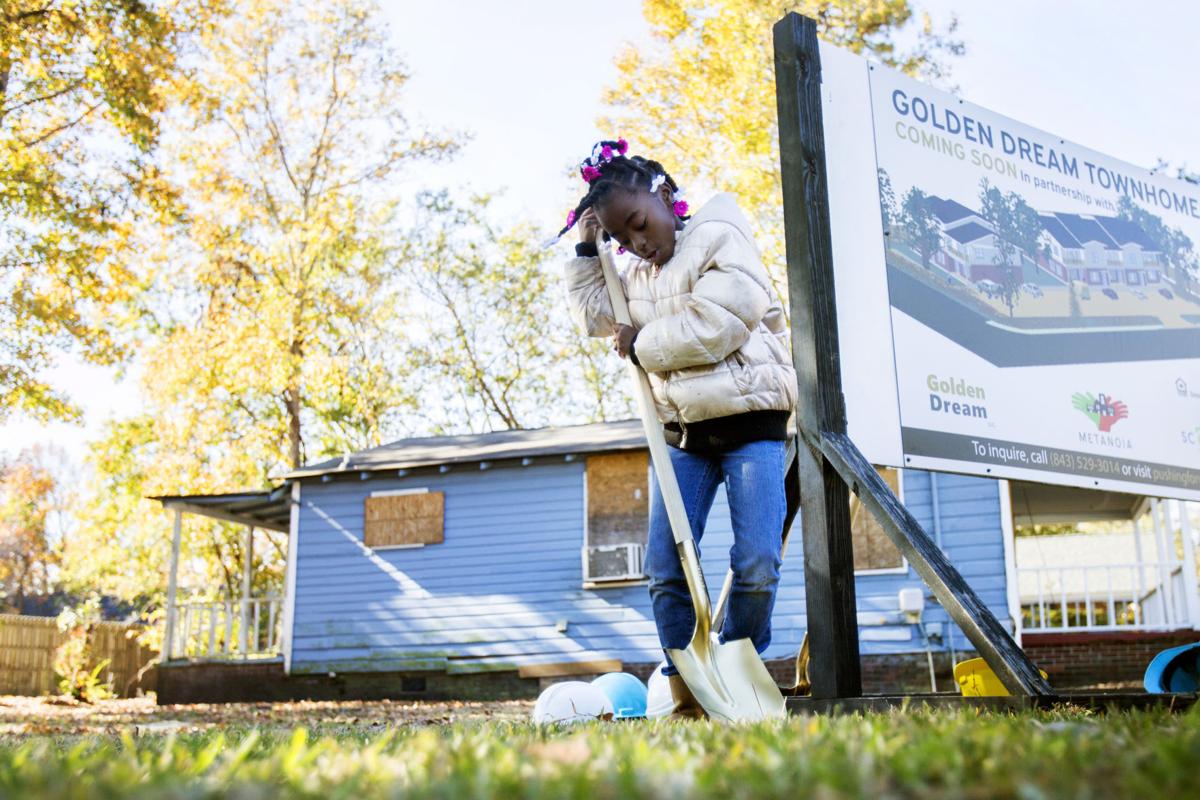 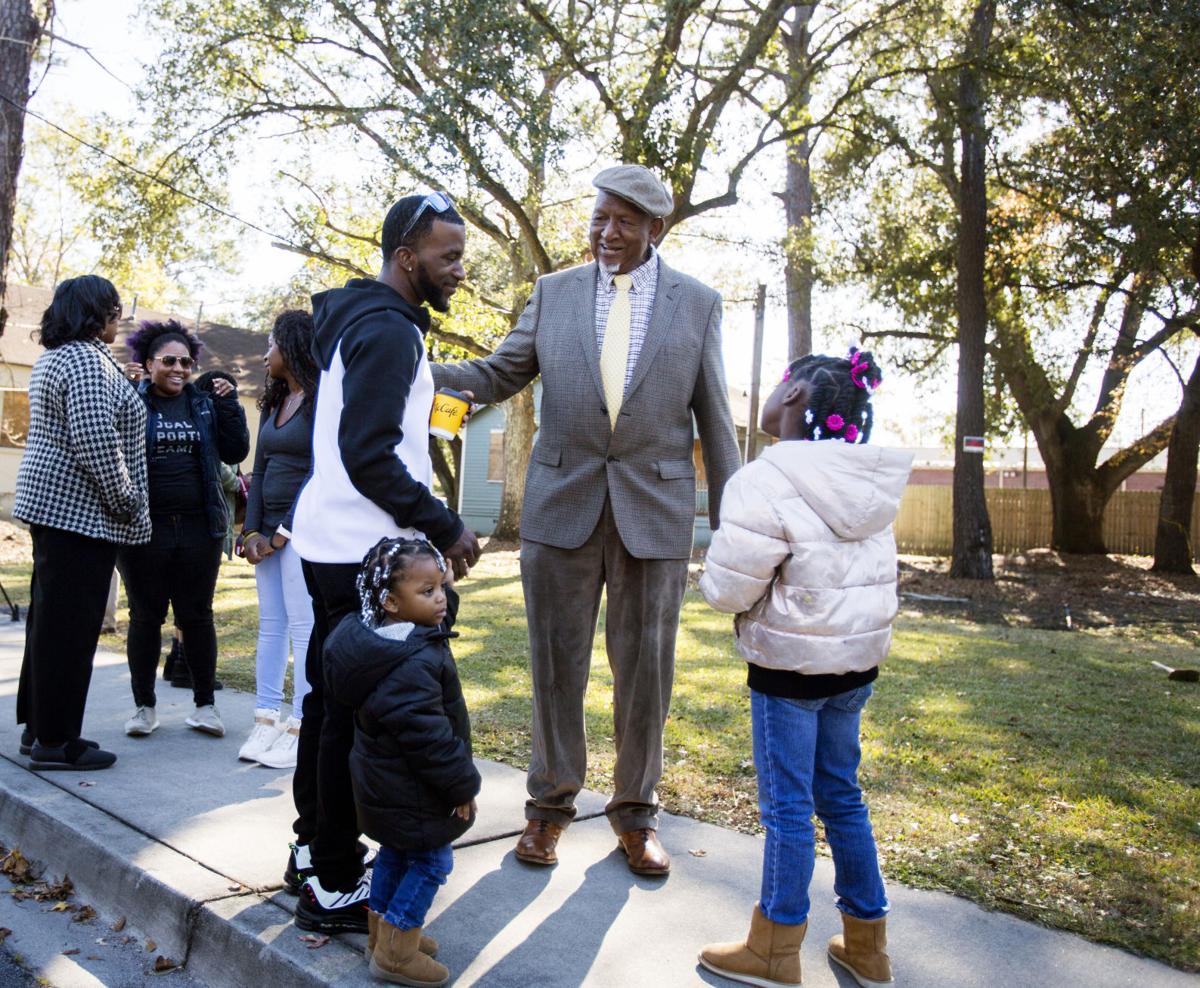 Generations after this piece of North Charleston land was purchased by African Americans recently freed from slavery, it will become new affordable housing, serving generations to come.

Dozens of residents and community leaders assembled Friday to break ground on the Golden Dream Townhomes, a new affordable housing project in Liberty Hill, one of the city's most historic communities.

Carolyn and James Lecque are descendants of the two freedmen who originally owned the land in 1871. At Friday's ceremony, they said the new townhomes will continue the legacy of their ancestors, William and Plenty Lecque, who served as bricklayers.

"They built a lot of housing in the city of Charleston for people who didn't look like me," Carolyn Lecque said. "How fitting we're building housing now for people who look like us on property they owned."

The eight-unit affordable housing complex is the result of a partnership between Metanoia, a North Charleston community development organization, and the Lecque family.

What makes the project unique is that while the housing will be managed by the nonprofit, ownership of the one-half acre lot at 1613 Lester St. will remain with the family.

Metanoia worked with Lecques to establish a 50-year ground lease, enabling the nonprofit to build affordable housing units as the family earns revenue and has a long-term asset.

People buy the homes, but the trust keeps the land so that residents are not displaced due to gentrification.

This project is slightly different since the family owned the property on the front end.

"It's a win-win," said the Rev. Bill Stanfield, CEO of Metanoia.

The $1.6 million project will contain a range of one-, two- and three-bedroom units, which will all be affordable to low- to moderate-income renters. It is scheduled to begin construction in early March and be completed by next fall.

While the project is made possible through recent funding from the South Carolina Housing Finance and Development Authority, the family has been trying for years to use its land to create affordable housing in Liberty Hill.

Family members who served on the city's Planning Commission pushed to have the Lester Street lot zoned in 1994 to accommodate multi-family housing.

Even as the Lecque family sold other property in the neighborhood, such as the adjacent land containing a Family Dollar, its members always had a desire to keep some property that could be used to help those in need.

"That's been our vision for years," said Carolyn Lecque.

The family hopes to create more affordable places to live in the neighborhood. Across the street is a lot that used to contain a nursing home for black men, and the Lecques want to see the site become a place for senior housing.

On Friday, faith and community leaders applauded the effort that they see as a solution to the area's affordability crisis, one where a growing number of workers in the Charleston region can no longer afford to live near their jobs.

The Rev. Nelson B. Rivers III, who pastors Charity Missionary Baptist Church in Liberty Hill, noted that the new housing helps address the displacement that threatens many of the region's historically black communities.

The concern is especially prevalent in Liberty Hill, where property values are already rising because of its proximity to Park Circle, a rapidly-growing neighborhood that has welcomed many new apartments and businesses in recent years.

"This is where gentrification stops," Rivers said. "And this is where transformation begins."

The Golden Dream project may inspire families, churches and organizations who own property and want to give people affordable places to live. Stanfield said that Metanoia would consider replicating the concept, but it is only one of the organization's several strategies to giving people a place where they can life at reasonable costs.