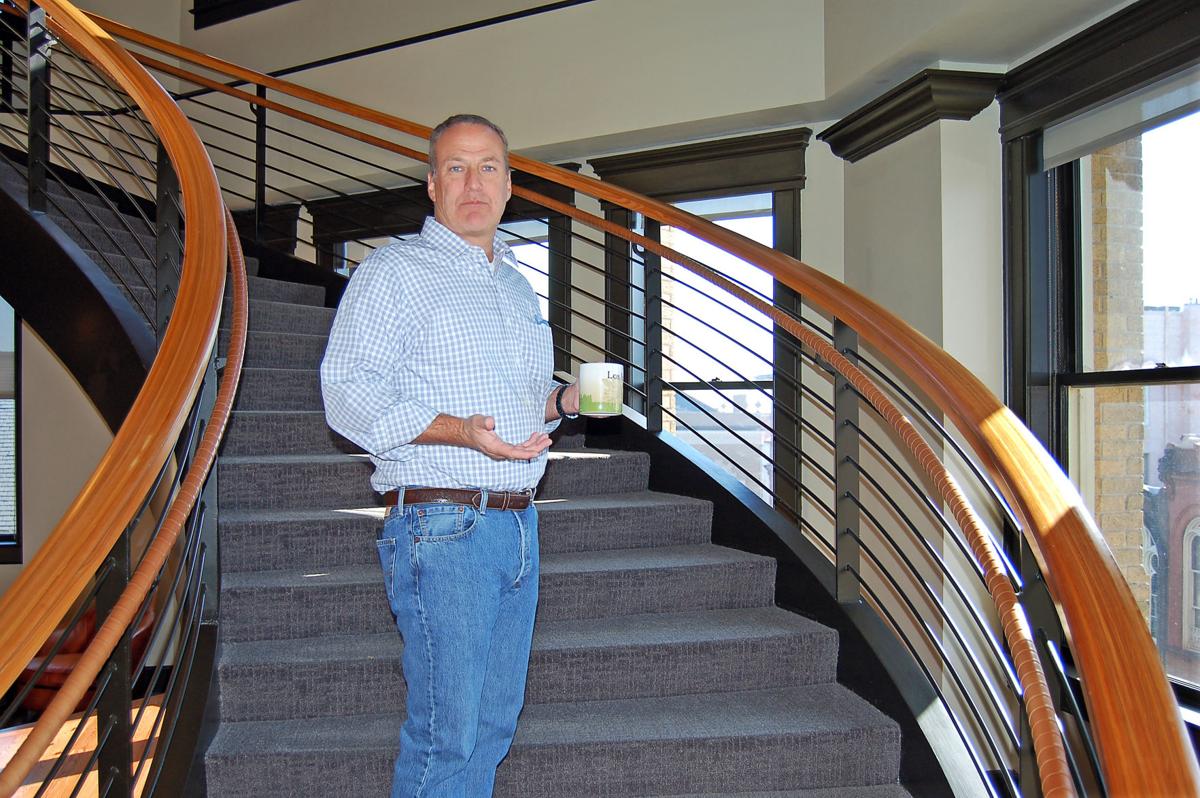 Bob Faith, chief executive and chairman of Greystar Real Estate Partners, heads up the stairs of the two-story headquarters office in the People's Building. 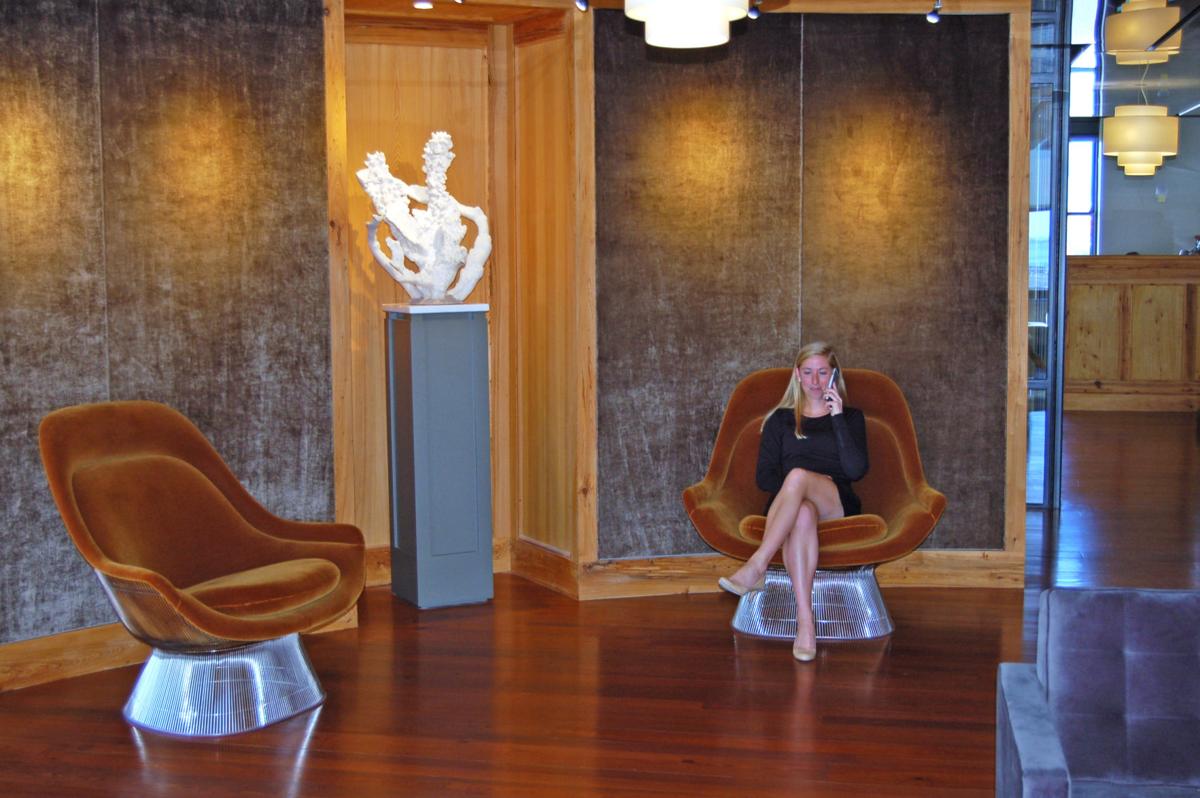 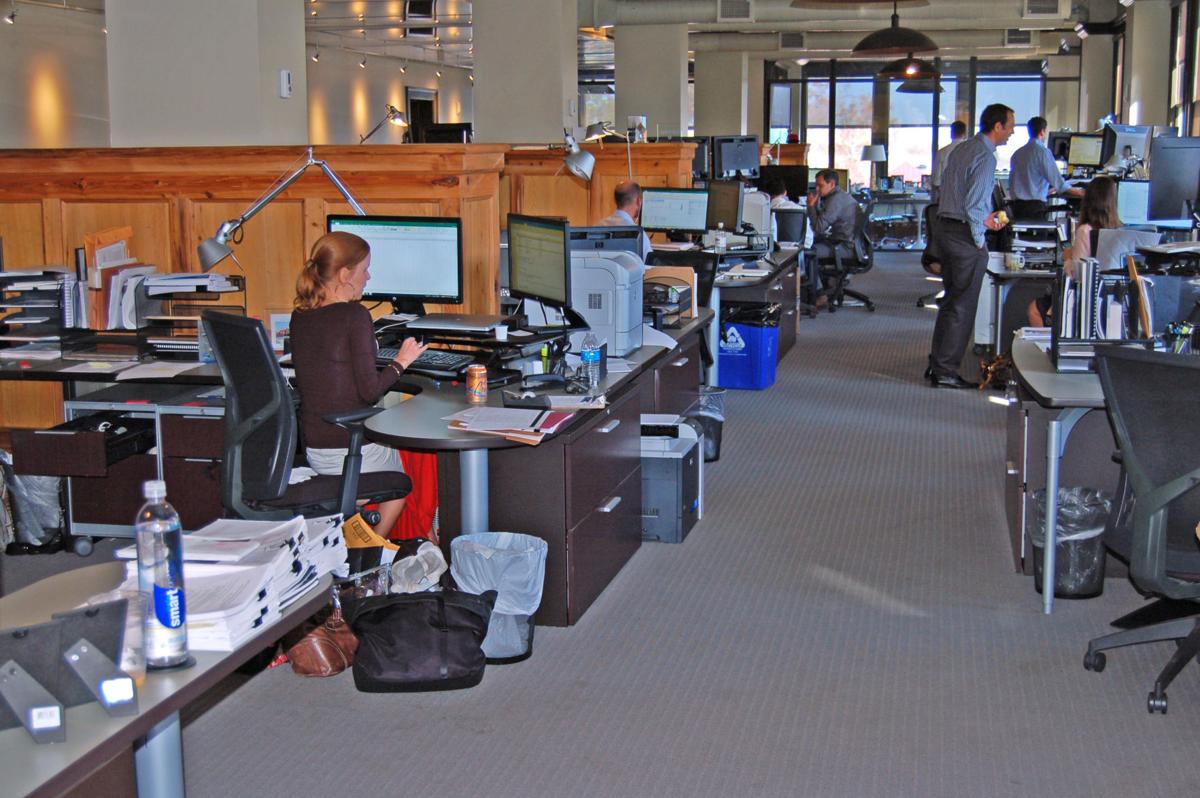 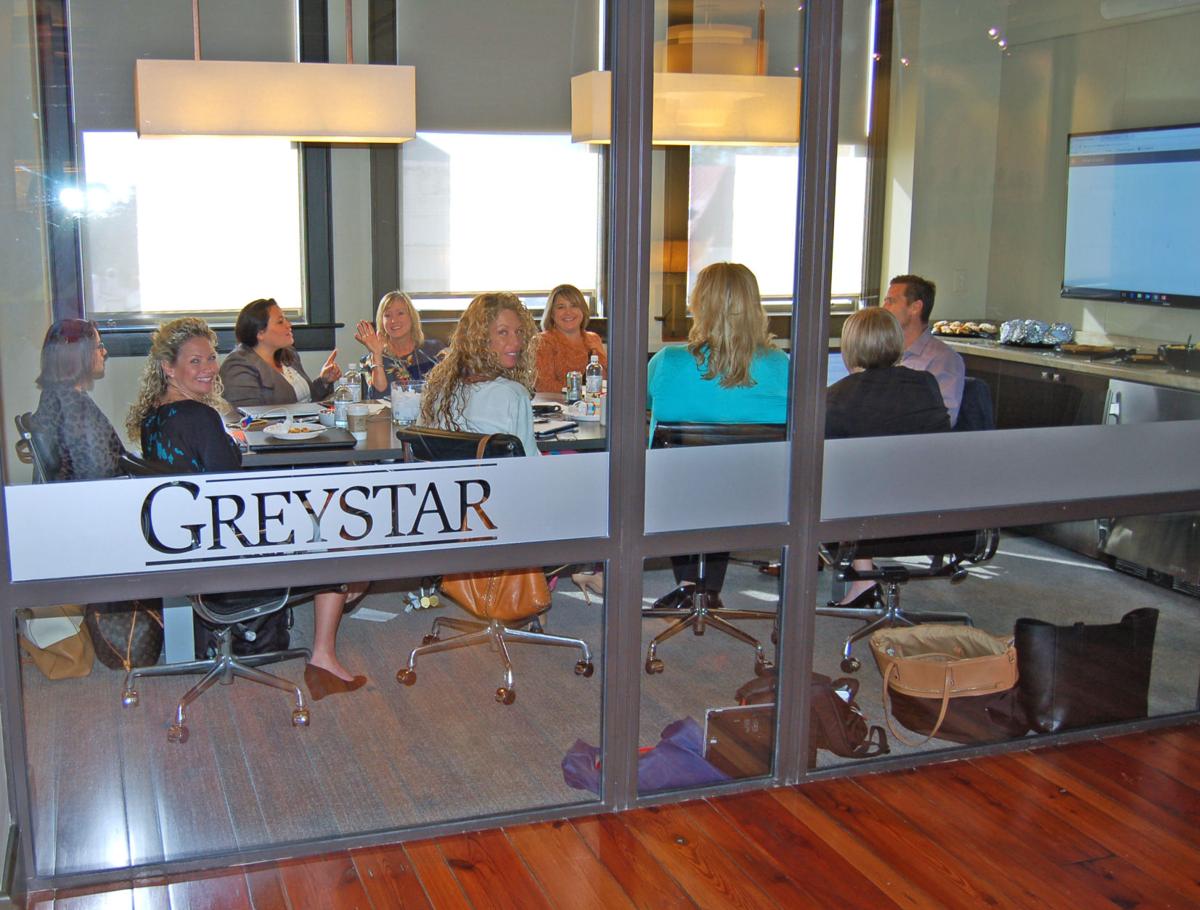 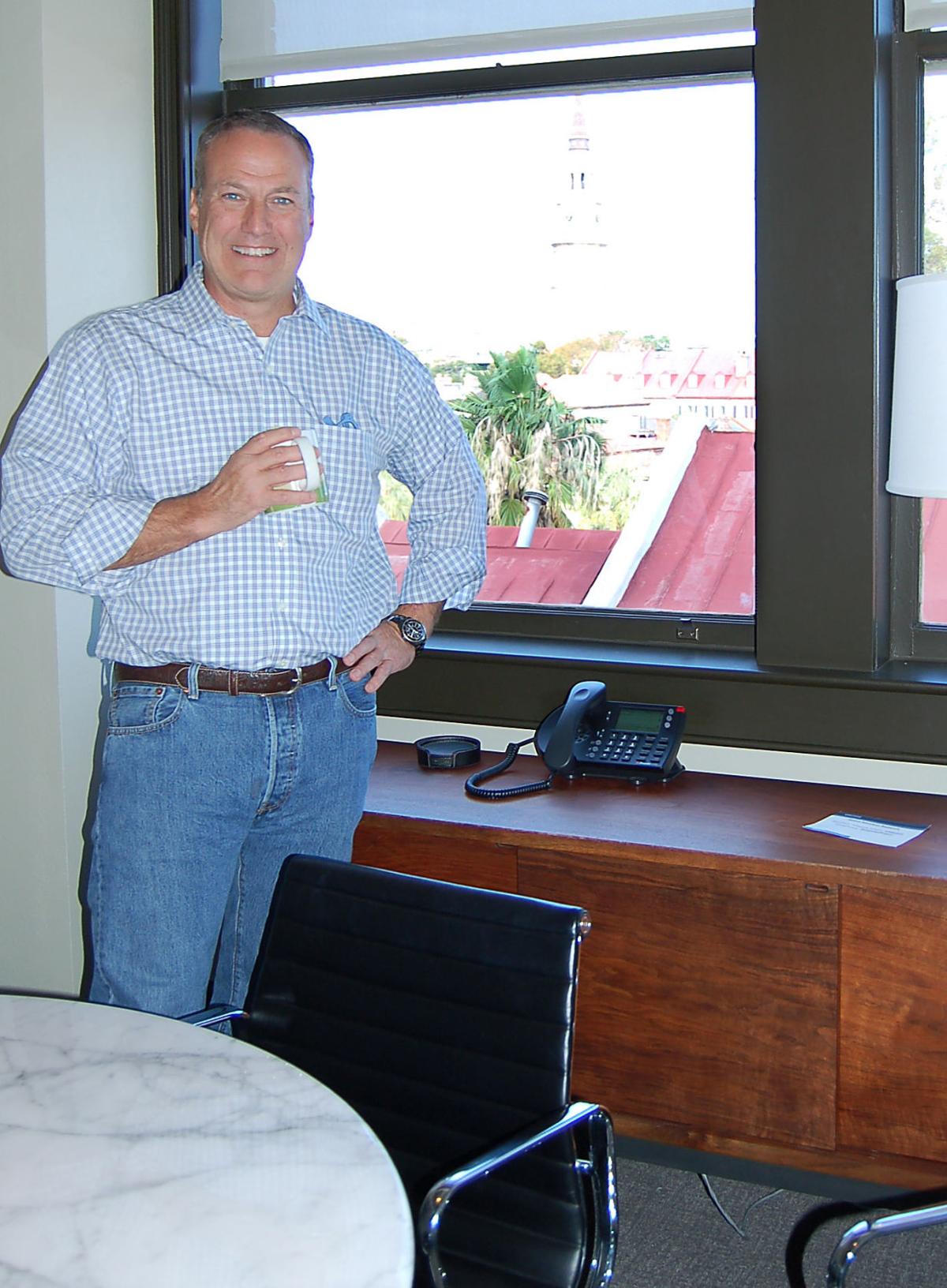 Bob Faith, chief executive and chairman of Greystar Real Estate Partners, heads up the stairs of the two-story headquarters office in the People's Building.

Dressed work casual, Bob Faith walks into a corner office of the finely-toned Greystar headquarters on two floors of the People's Building with his yellow lab Koda in tow. "She's pretty spoiled," he said, half-joking. It's Wednesday morning, Nov. 2 and Faith holds a coffee cup in one hand. He offers a guest a tour around the center, which houses the largest apartment management company in the United States.

Working in an environment with few walls, broad cubicles and a glass-sided conference room, the 150 employees go about their business with a relaxed countenance. Sometimes, the job may cut to impromptu breaks. An old football rests on top of papers scattered on a shelf, hurling the pigskin across an elongated main floor for a few minutes is a time-honored pastime.

Faith, who went to college at the University of Oklahoma and spent years with Texas-based developer Trammell Crow Cos., migrated to the South Carolina Lowcountry two decades ago. Seeing the need for a national company to build top-notch apartment homes, he launched Greystar Real Estate Partners in 1993 and is the company's chairman and chief executive officer.

According to its website at www.greystar.com, the company counts more than 400,000 "managed residences," oversees $14 billion in investments worldwide and lists 100 multifamily developments in the U.S. totaling 30,000 units and valued at $7 billion.

In a recent interview, Faith says he didn't set out to be the biggest but from the beginning sought to be an important player in the field.

Greystar started in business at 17 State St., a much smaller red metal-roofed building that's visible below the corner office he now uses for meetings with close staff or one-on-ones. Today, the company boasts sprawling quarters at 18 Broad St. but is outgrowing these digs as well. Greystar is a developer of Evening Post Industries' Courier Square project on Columbus Street. Once complete, Greystar will be property manager. The company penciled in a new three-tier headquarters at the development with "room for 252 folks," Faith says.

Along with the Lowcountry workforce growth, the company in 23 years quietly grew to 12,000 employees around the globe, from Great Britain to Asia and across the U.S.

This year, Faith has gained exposure for his visionary, yet under-the-radar, approach. Multifamily Executive publication named Faith its Executive of the Year. "Clearly, that was really flattering to get an award like that. Being recognized is reflective of the whole team, as CEO you get the accolades," he says.

Meanwhile, Faith joined such luminaries as Mark Zuckerberg of Facebook, Jeff Weiner of LinkedIn, Sundar Pichai of Google and Tim Cook of Apple in Glassdoor's Employees' Choice Awards. Faith was the only real estate executive named.

"That was more rewarding to me," he said. The firm's employees voted on the award, and Faith was the sole real estate chief, "not just apartment company (executive)."

"I think it's a reflection of the focus of the company on people," said Faith, who served as Gov. Mark Sanford's economic development director. Greystar follows what it calls the "six pillars of excellence" in measuring its strengths, he says. "People are the top pillar." If the company's successful, it's because there are workers who care for the job.

"We are very inclusive, hopefully the culture is driven from the top," the CEO says. Faith preaches "approach-ability, openness. Particularly today's millennials, a large part of the workforce, demand (such an) environment," he says.

The CEO acknowledges that growth "really has been a part of our strategy. Balanced business worked," Faith says. "We do know real estate is a cyclical business," he says. "Up one day, (you) know it will be down one day, then up (again)." Yet with Greystar, there's been positive growth every year since the company began in 1993. In starting Greystar, there was room for a company to own and manage apartments nationwide.

While apartment occupancy and growth rates have stayed relatively steady, there's been shifts in the past decade in the public's proclivity toward rental properties. "I think there are some sociological changes which have lead to more people wanting to rent, or rent longer," Faith said. "When I was coming up, you work at the same job for 40 years, buy a house." Today, people move in their jobs five or six times. "Renting allows flexibility of lifestyle," he says. According to demographics, 60-65 percent of 20-34 year olds have a propensity to rent, he notes. Another change that's lead to a more transient lifestyle: "People do things late (like) have kids."

Greystar in recent years discovered expanding apartment markets overseas. The company entered the U.K. and the Netherlands, and is going into Germany next year. The company's Latin American headquarters is in Mexico City and the business just expanded into Santiago, Chile. Two weeks ago, the company formed Greystar Asia with plans to enter Japan, China and in a joint venture in Australia.

"It's a lot to say grace over in Charleston," he acknowledges. "Technology and how we run our business allows us to work in Charleston," Faith said. Greystar makes capital allocations from South Carolina, but the international ventures ultimately are local. Charleston can supply concepts to the Mexico office, but it's a Mexican business.

Even with Greystar's surging growth, the headquarters will remain in the Lowcountry, "as long as I can get on a flight for Charleston," Faith says.

Faith says the analysts he talks with "love coming to Charleston."

Greystar reaches out to tenants on the local level and relies on residential satisfaction third party surveys to make sure renters are pleased with their digs. "What's critical are on-site managers, who meet with residents. Sinks are going to break, fobs not work." But everything's fine "if we have competent people."