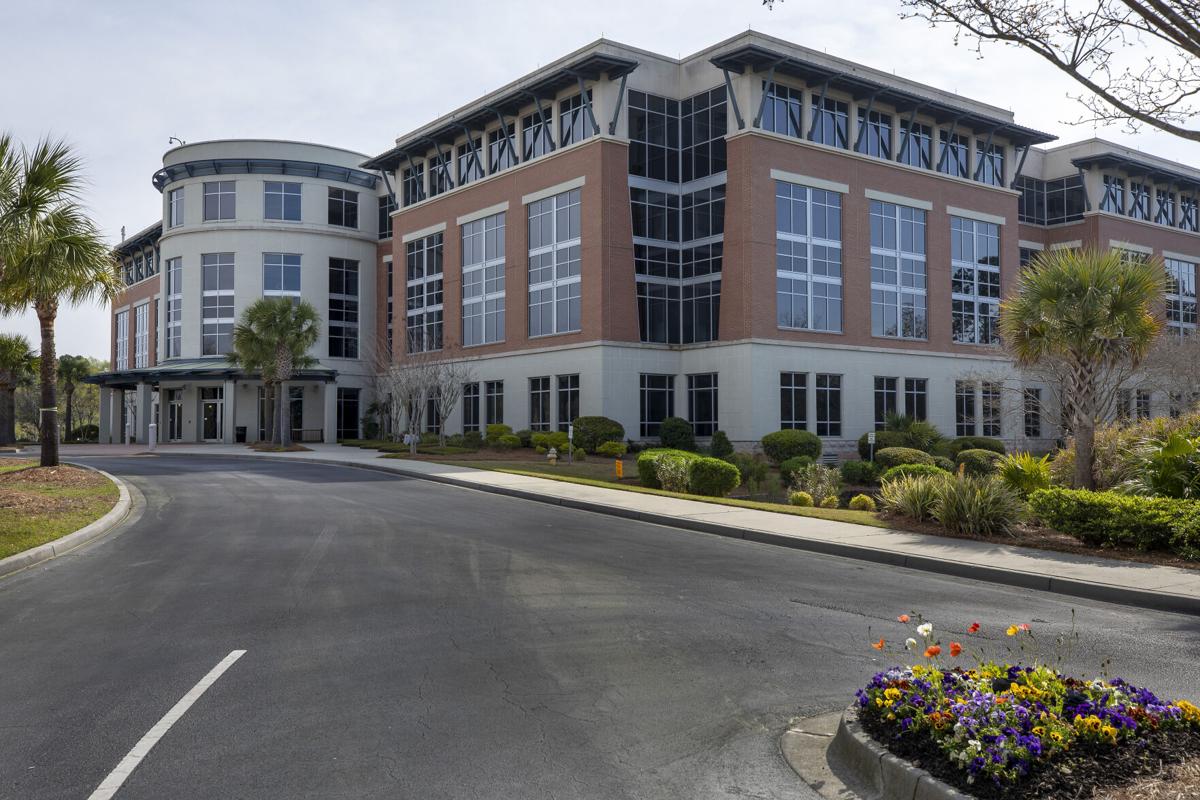 The building that formerly housed employees of Blackbaud sits empty on Daniel Island. Plans are in the works to redesign the interior for multiple office tenants. Grace Beahm Alford/Staff 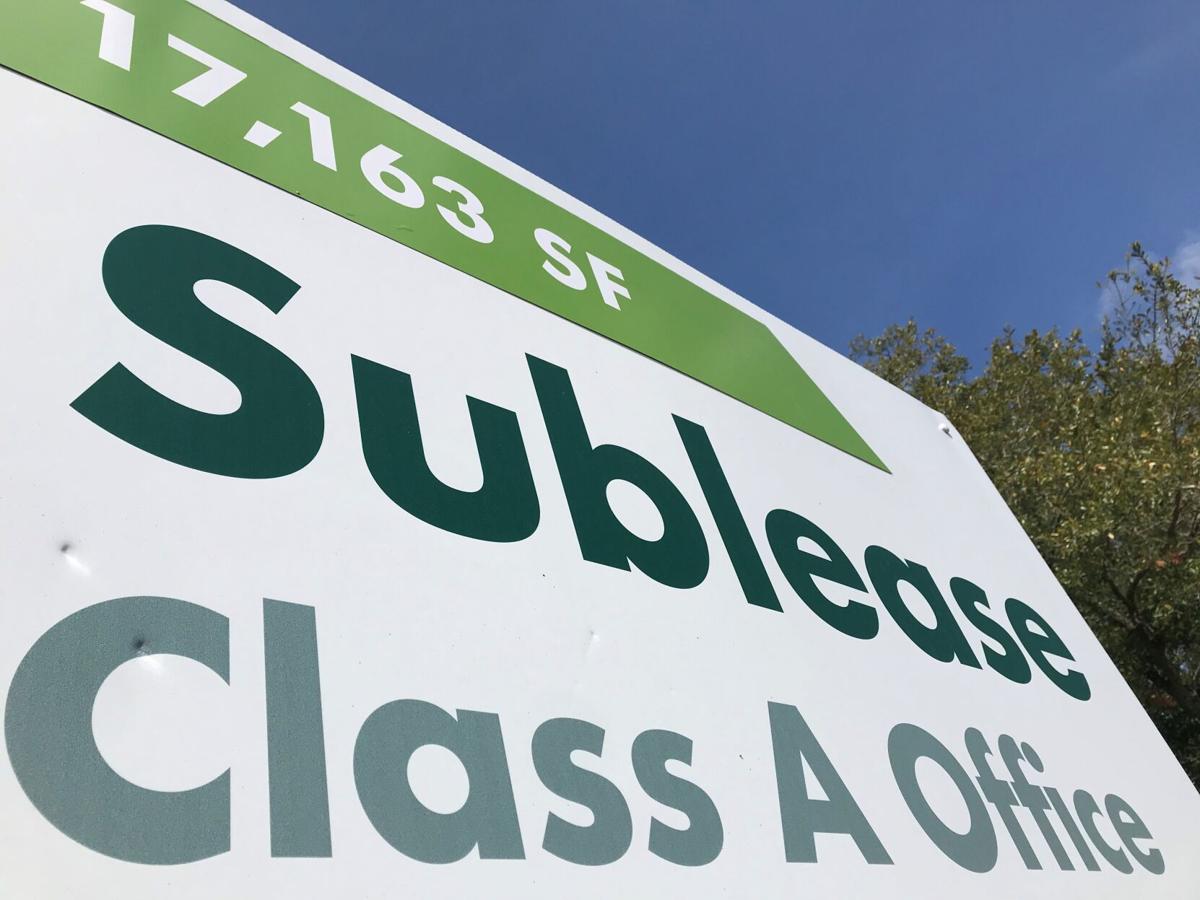 The pandemic has resulted in loads of office space now available around Charleston and across the nation. Warren L. Wise/Staff 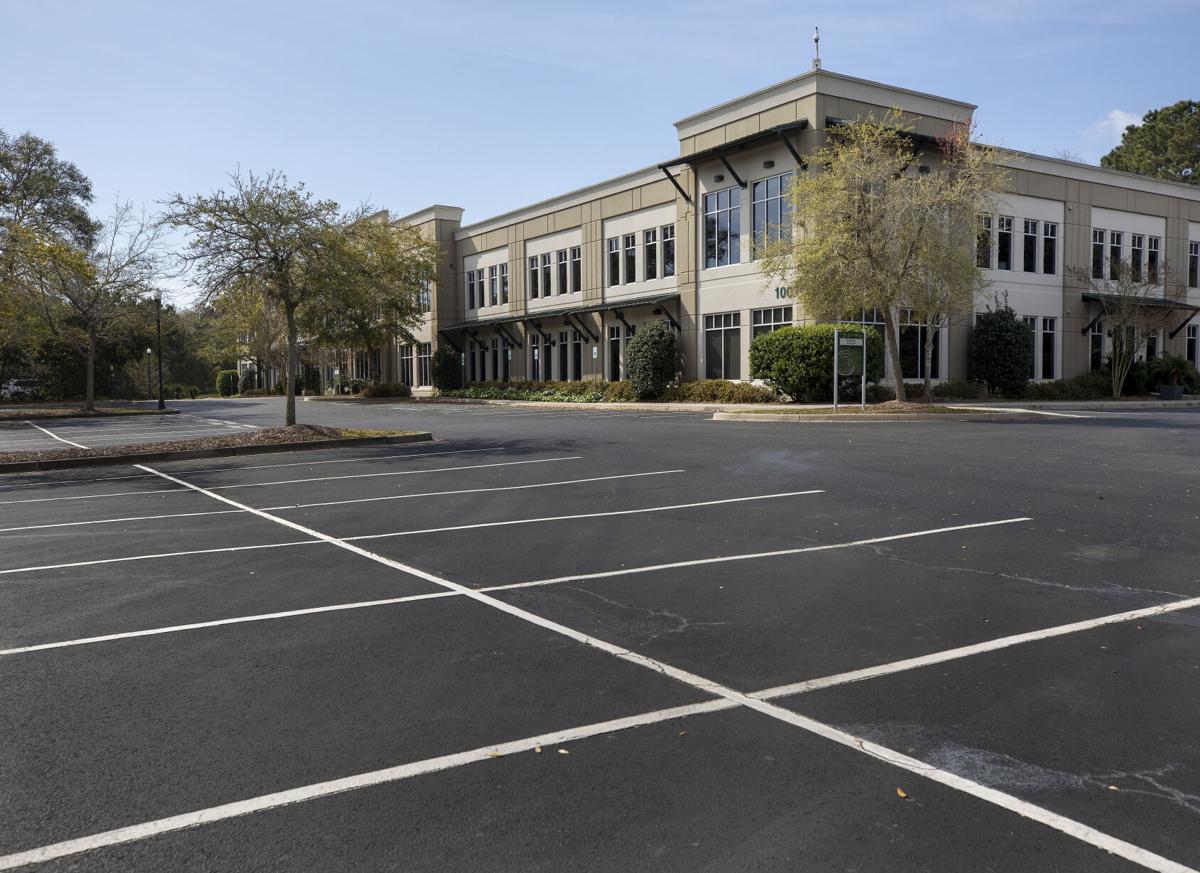 The parking lot sits empty on March 26 at the building that formerly housed employees of Benefitfocus on Daniel Island. A few have since returned, but the majority continue to work remotely. Grace Beahm Alford/Staff 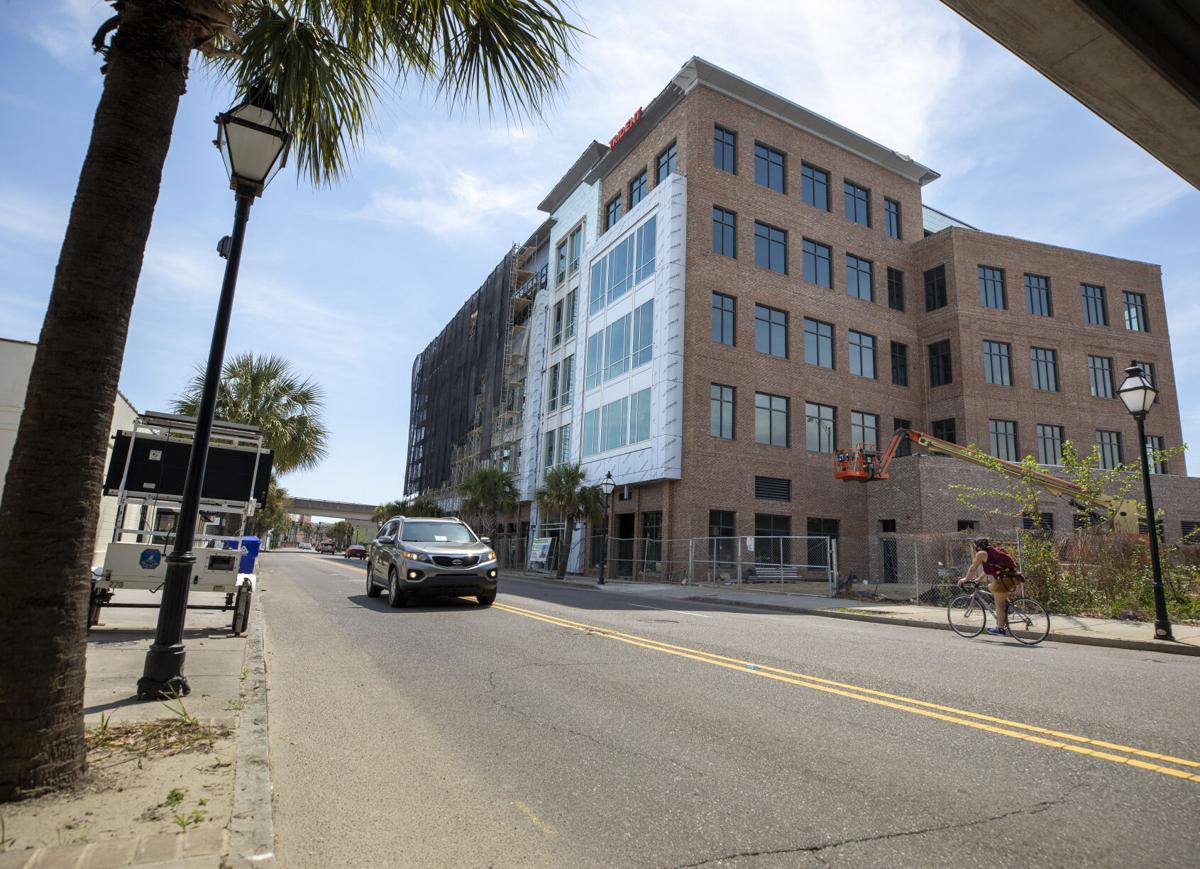 Construction continues March 26 on a five-story office building at 677 King St. on the Charleston peninsula. It's expected to open in June, adding more office space to the high volume already on the market because of the pandemic. Grace Beahm Alford/Staff

The building that formerly housed employees of Blackbaud sits empty on Daniel Island. Plans are in the works to redesign the interior for multiple office tenants. Grace Beahm Alford/Staff

Construction continues March 26 on a five-story office building at 677 King St. on the Charleston peninsula. It's expected to open in June, adding more office space to the high volume already on the market because of the pandemic. Grace Beahm Alford/Staff

One year ago, the pandemic moved in and office workers moved out.

All the while, the real estate reshuffling didn't stop many projects in the pipeline from being built.

Now, a glut of cubicles sits empty in Charleston and across the nation.

Across the U.S., 70 million additional square feet of office space became available on the sublease market last year after the start of the pandemic, according to a recent report from the commercial real estate firm Lee & Associates.

A variety of factors came into play: economic uncertainty, job cuts and proliferation of remote work.

Charleston was not immune to the rapid spread of office flight.

Across the Lowcountry, the amount of vacant sublease offices — empty space that in most cases tenants are trying to backfill with new renters — mushroomed four-fold to more than 865,000 square feet by the first three months of 2021 from the end of 2019.

Two buildings alone  — both on Daniel Island — account for nearly two-thirds of the inventory.

About 230,000 square feet sit idle in a four-story building previously occupied by software firm Blackbaud Inc. Because of the virus, another 289,000 square feet are operating at minimal capacity at a neighboring technology company, Benefitfocus Inc.

One of major culprits is the shift to remote working, Lee & Associates said.

A few workers are back on site in Benefitfocus's three buildings, while the 225,000-square-foot former Blackbaud headquarters — the global company relocated most of its local workforce in 2018 to a newly built corporate campus not far away — is set for an interior overhaul so it can be marketed to multiple tenants.

"The building was designed for single-tenant use, and we want to do a full redesign for multitenant use," said Billy Cooke, vice president of Atlanta-based Holder Properties, which paid $35.5 million for 2000 Daniel Island Drive in 2019. "We hope to get it redesigned and permitted and have construction started later this year."

At Benefitfocus, the software company “is shifting to a flexible philosophy of 'wherever you are the most productive, is where we want you to be,'" chief human resources officer Robin Kirby said. "For some, that will be in the office either full time or in a hybrid model a few days a week. For others, that may be fully from their home office."

On the peninsula, the amount of empty office space jumped to almost 72,000 square feet by the first quarter of this year from about 3,500 square feet at the end of 2019, right before COVID-19 hit the U.S.

While occupancy has plunged, landlords have tried to keep rents constant by offering concessions such as free rent, flexible terms, higher buildout allowances and furnished spaces.

Still, overall leasing rates in the Charleston area fell more than $3 to roughly $24 per square foot for office space at the end of 2020 from a year earlier, according to the commercial real estate firm Colliers International.

Because of the amount of available space, overall rental rates are expected to drop further, at least in the short term, until leasing activity returns to a more normal pattern and a good chunk of the vacant inventory is absorbed.

That's not expected anytime soon, tipping the scales in a tenant's favor.

Business owner Pam Hartley, for one, is hoping to tap into the more favorable leasing terms.

Like thousands of other workers across the Lowcountry, her staffers at Momentum Marketing left their offices behind a year or so ago and started working from the safety of their homes.

After six months of going into an empty office day after day, Hartley left her 4,500 square feet on Daniel Island and moved into a small co-working space in North Charleston.

With vaccinations now ramping up, the 16-year marketing firm owner is looking now to have something lined up for when she calls her staff of less than a dozen back into the office by the fall.

"Nothing takes the place of person-to-person contact," she said.

She's also wondering how her workers will acclimate to an office environment after having the freedom and flexibility of doing their jobs from home.

"I don't know if it will go back to the way it was," Hartley said.

Hardly anyone believes it will. As the Lee & Associates' report noted, "The pandemic ... has shifted the office landscape irrevocably."

Most businesses realized productivity hasn't suffered with staff working from home, and some owners, like Hartley, won't be needing as much space when they do return to an office environment.

"There's a divergent view on how this will pan out," said Chris Fraser of commercial real estate firm Avison Young.

He pointed to a law firm leasing a space for full occupancy, as one side of the coin. The other is an accounting firm that is reducing its footprint by half since workers can plug in numbers on a computer from anywhere with a decent internet connection.

For Barry Schneiderman of BKS Tax Service, he won't be going back to the 850-square-foot office he held for the past 31 years in Mount Pleasant.

"I probably won't ever have a brick-and-mortar office again," he said. "I've grown accustomed to working from home."

That's potentially a trouble spot for landlords and commercial agents trying to fill empty offices in existing and new buildings.

On the peninsula, four new office developments springing up will add nearly 350,000 square feet to the mix.

Among them is a high-profile, five-story structure on King Street that's set to open in June between the Crosstown overpasses. Developer Mitch Norville of Greenville-based Atlantic South Development doesn't have a tenant lined up yet for the 63,000-square-foot project, but he is optimistic a recent pickup in interest will convert to leases.

"I'm hoping COVID has created a bit of pent-up demand," he said. "If you have been in the same office for the past 20 years, it's likely either too big or too small now ... and you need a different space."

While Norville believes it will take 18 months to two years to lease his entire building, mainly because he works with smaller tenants, he's confident office workers will return, even if not in the same way.

Some of the new space is finding takers. The recently completed 93,000-square-foot Charleston Tech Center on Morrison Drive on the peninsula is about two-thirds of the way leased up, as is the 20,000-square-foot, two-story Home Telecom building in Nexton near Summerville.

The 135,000-square-foot Morrison Yard office building that's now getting underway is 20 percent leased while a couple of other buildings under 30,000 square feet in Mount Pleasant and on Daniel Island also have some leases in hand, according to agents.

Awaiting rental activity for the most part on the upper peninsula are the 110,000-square-foot Quin, the 115,000-square-foot Morris and the nearly 30,000-square-foot structure at 741 Meeting. Two more under construction on the former Navy Base in North Charleston and another at the base of the Ravenel Bridge in Mount Pleasant also are looking for tenants.

For agents who specialize in lining up office tenants, the absorption of empty space will happen — how long it will take is the main question.

Kristie Roe of Colliers International said a booming housing market gives her a reason to be optimistic.

About 30 new residents arrive in the Lowcountry each day, according to the latest data from the Charleston Regional Development Alliance. Some move to Charleston for job opportunities while others are fleeing larger, densely crowded metropolitan areas because of the pandemic.

Fraser of Avison Young agreed that population growth "will temper the loss of (office) downsizing to some degree. There are some things you can't do from home."

For instance, Fraser said, residential growth means the region will need more offices to house a wide assortment of everyday service-industry businesses, from insurance companies to dentists to veterinary practices.

And with new housing developments sprouting on the fringes of the region and homes selling at a brisk pace, there is cause to be hopeful of a turnaround, said Reid Davis of Lee & Associates.

"Leasing activity has picked up in suburban areas, and some of the short-term tenants are now looking at longer-term contracts," he said.

Davis pointed out, too, the overall office sublease vacancy rate of nearly 10 percent, as calculated by his firm, is still less than it was after the Great Recession more than a decade ago, though different firms have different estimates. Avison Young said the rate was 14 percent at the end of last year; Colliers pegged it even higher, at 17 percent.

Davis isn't sure how the vaccination rate and the sense of normalcy will translate into office leasing by year's end, but Fraser doesn't see a quick recovery.

"People will go back to their offices in the fall, but because of inventory and people downsizing, it will take two or three years for the market to absorb it all and get back to healthy vacancy levels," he said.