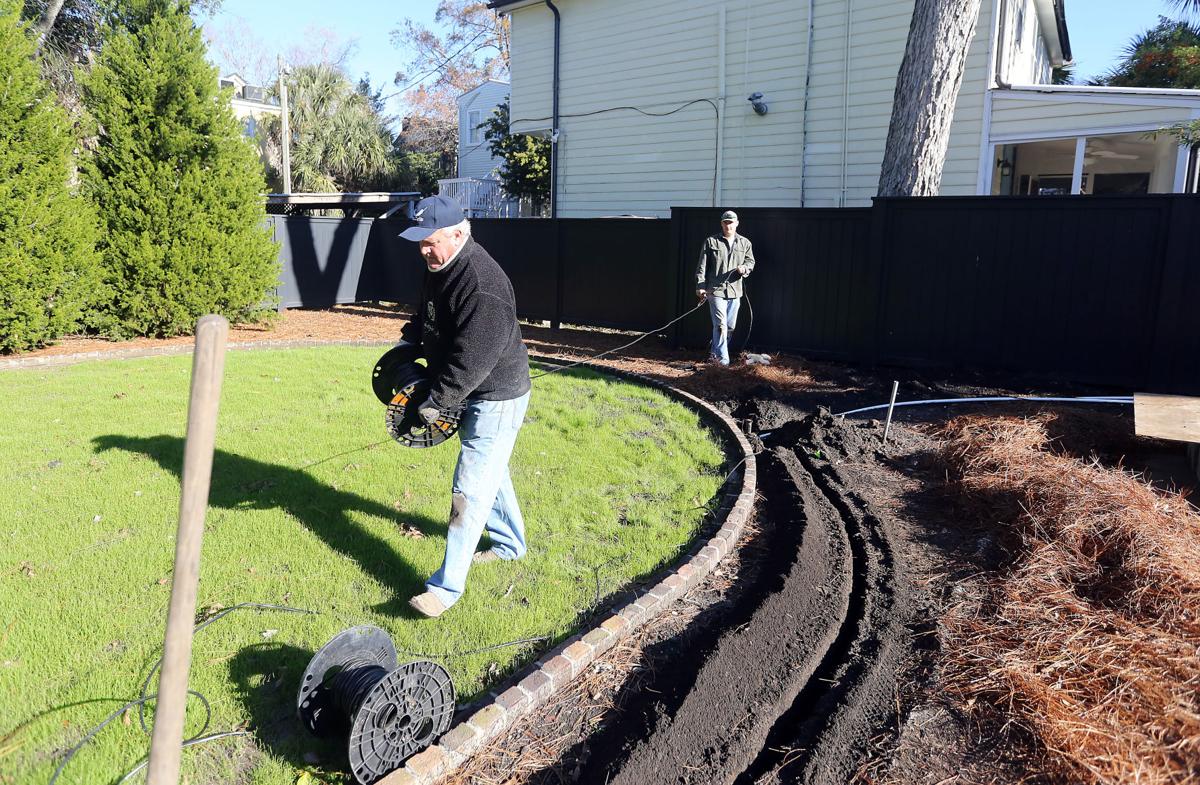 Kevin Sneed (front) and Lance Jenkinson prepare to place wiring in the trenches for an irrigation system at a downtown Charleston home Wednesday, Dec. 18, 2019. Brad Nettles/Staff 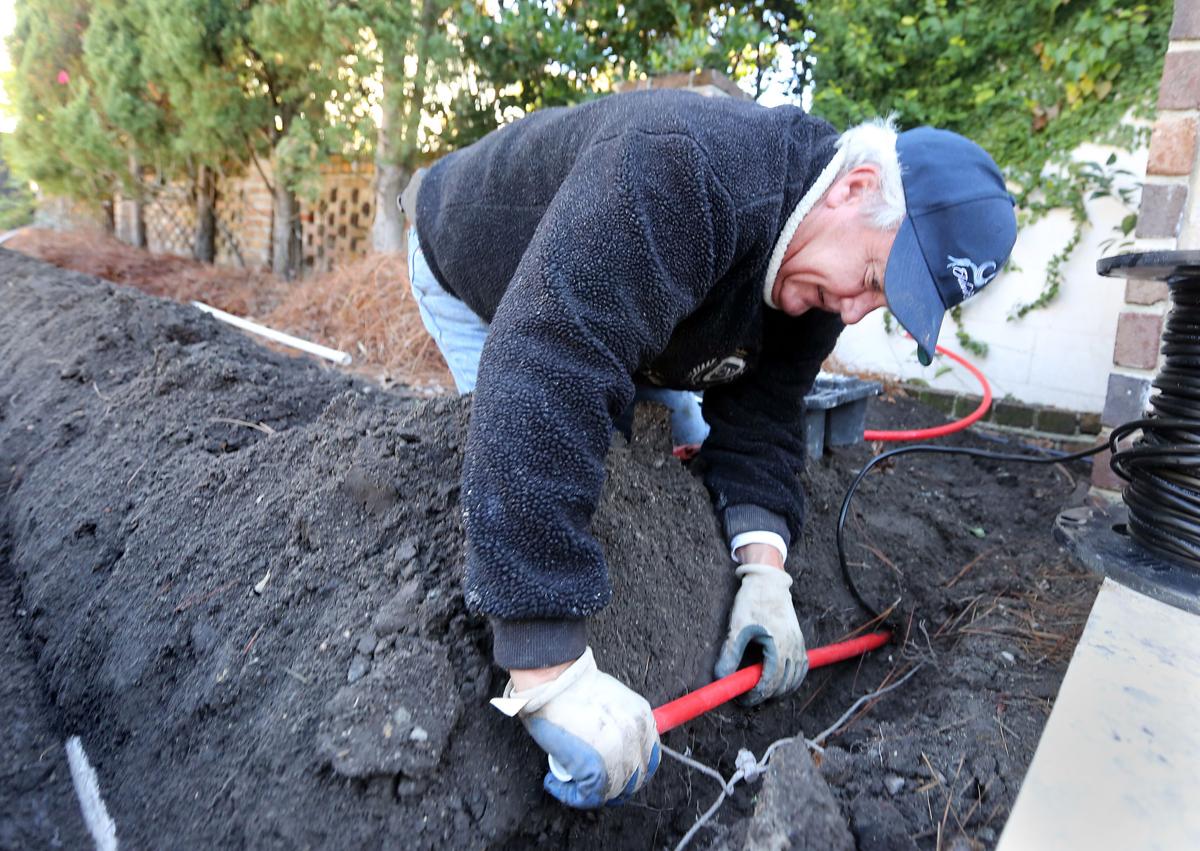 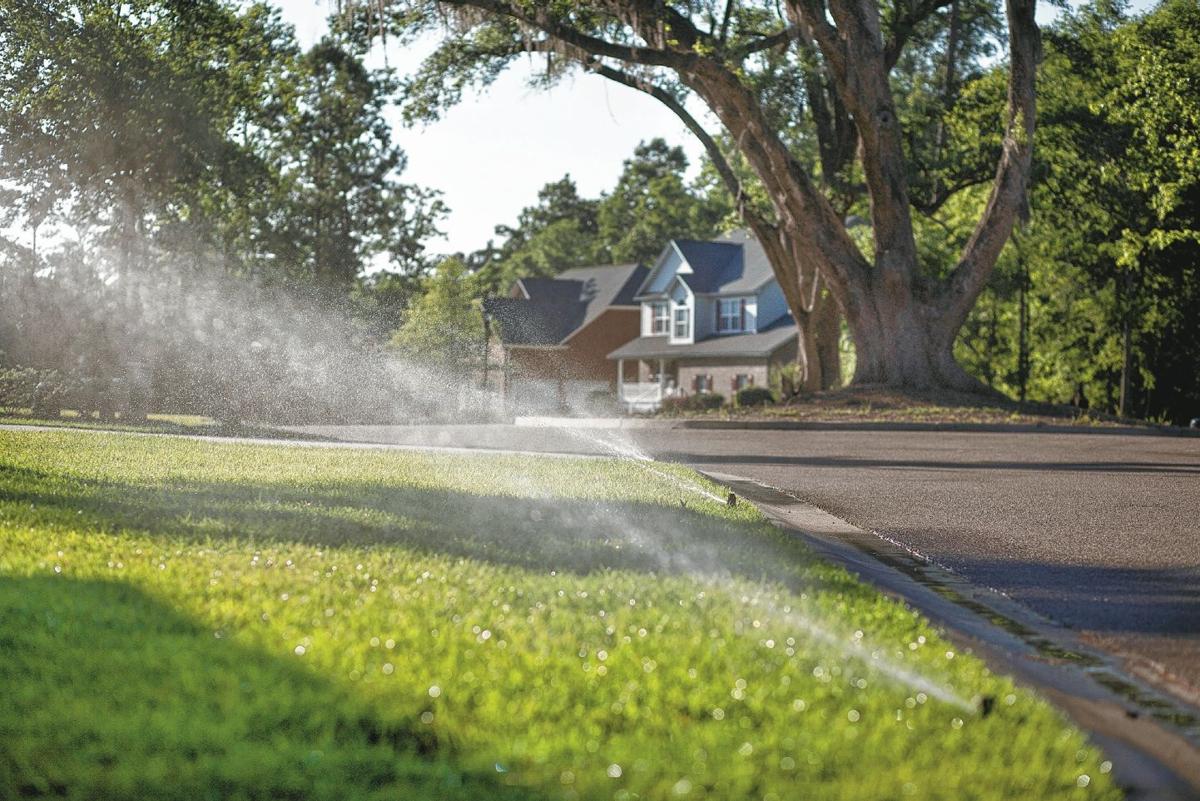 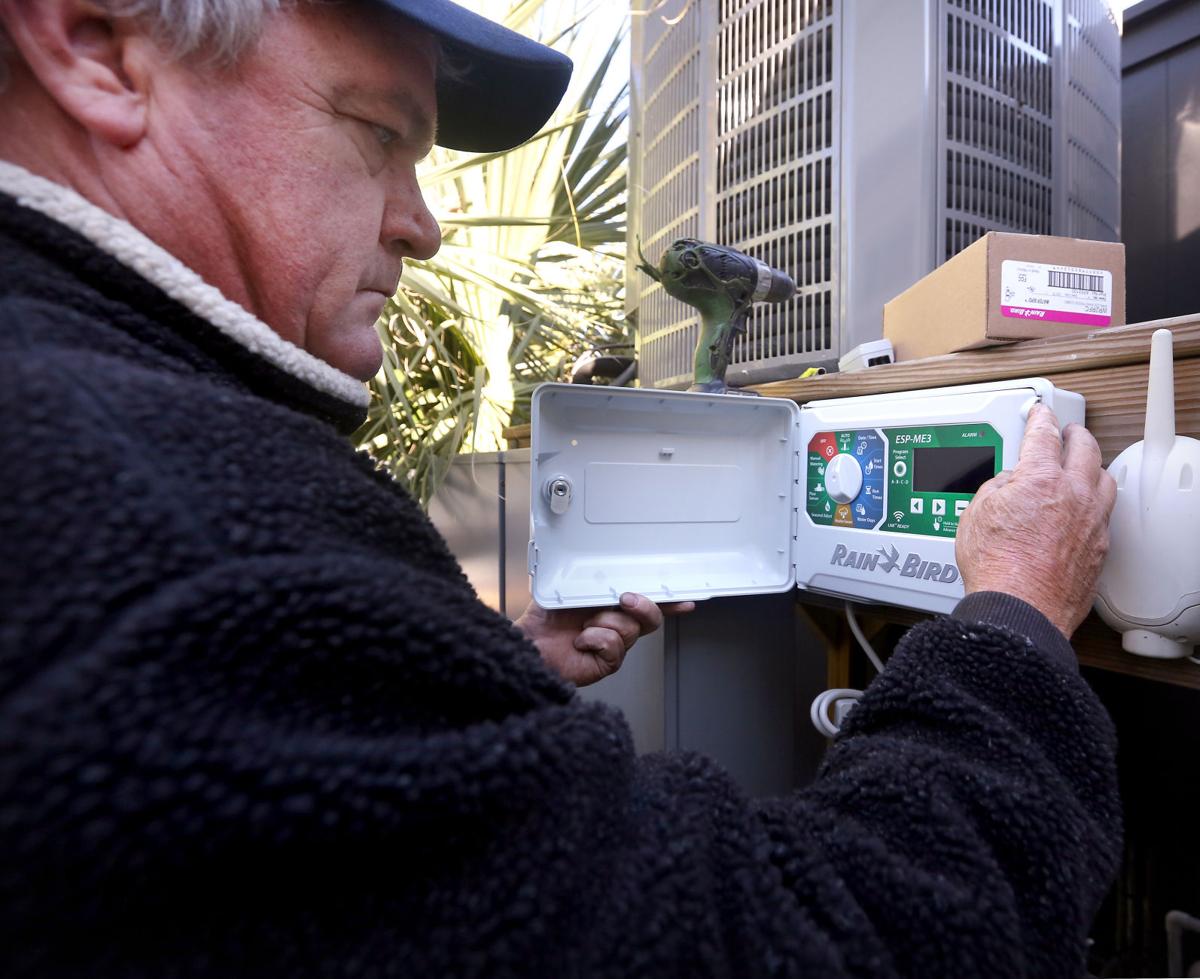 Kevin Sneed installs the control panel for an irrigation system his company was installing at a downtown Charleston home Wednesday, Dec. 18, 2019. Brad Nettles/Staff 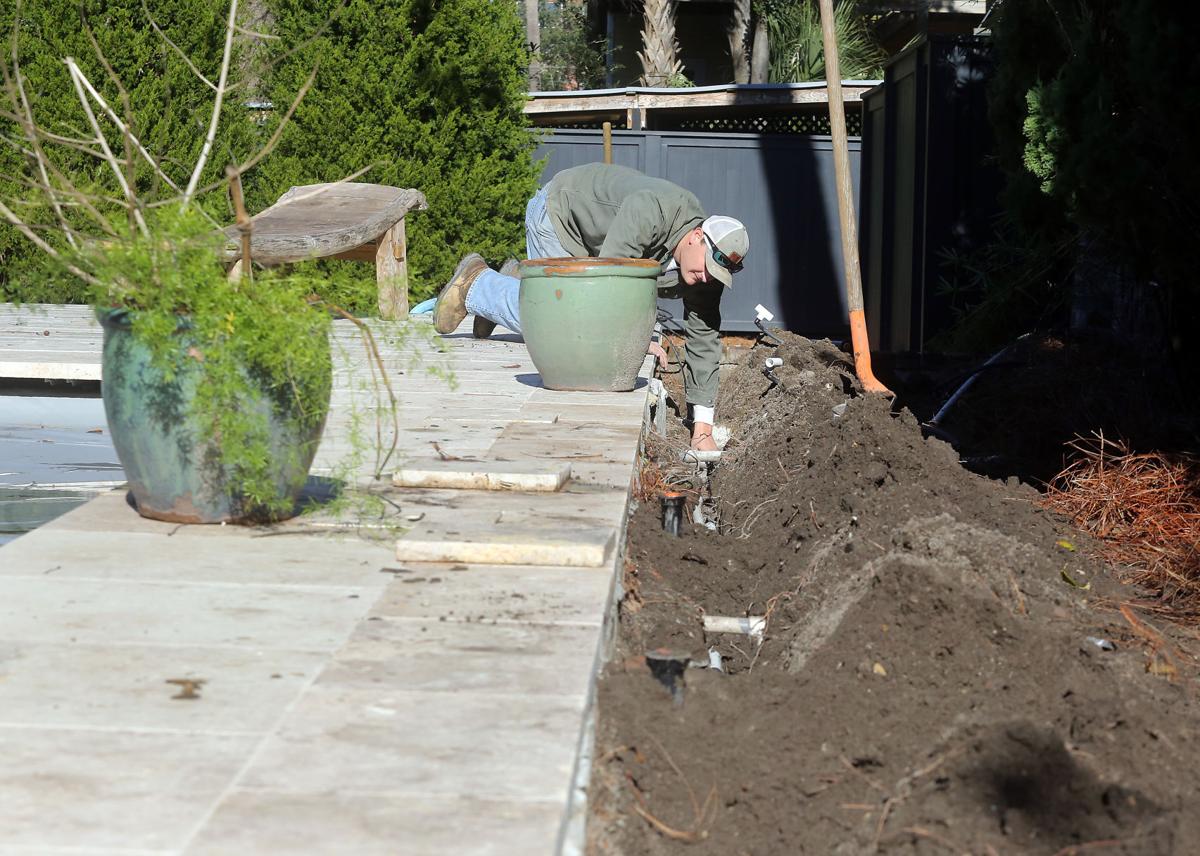 Kevin Sneed (front) and Lance Jenkinson prepare to place wiring in the trenches for an irrigation system at a downtown Charleston home Wednesday, Dec. 18, 2019. Brad Nettles/Staff

Sky-high residential water bills in the East Cooper area raised questions about Mount Pleasant Waterworks' meters in the summer of 2019, and highlighted the costs that can be associated with lawn irrigation.

While the utility has insisted its meters and bills are correct — that's the subject of an ongoing lawsuit — there are plenty of options for homeowners who want green lawns and lush gardens but don't want water bills that rival mortgage payments.

There are two key issues to consider: how water is being used, and where the water's coming from.

“People definitely over-water their lawns," said Jackie Jordan, a Clemson Horticulture Extension Agent with a college degree in turfgrass science. “I think a lot of people just set their sprinkler system and forget it."

Over-watering doesn't just waste water and money, she said. It harms lawns by making them more disease-prone, more attractive to pests — including grubs that attract moles — and less drought-tolerant.

“When you water every day or every other day, the roots stay shallow," Jordan said. Warm-season turf grasses "really require, at most, an inch a week."

One inch of water may not sound like a lot, but putting one inch of water on a quarter-acre of land requires nearly 6,800 gallons. And that's more water than the average home uses in a month.

Luckily, the one inch guideline includes rain, with irrigation only needed to make up any shortfall.

Gardening: When it comes to taking care of your Charleston lawn, less is more

He said using a smart irrigation meter that waters depending on weather conditions or soil moisture can improve lawn health and save water. Irrigation systems that simply water on a timed schedule can turn on the sprinklers when no water is needed, or even when it's raining.

Bertauski said adding a $20 rain sensor to an irrigation system is the least complicated, least expensive way to reduce over-watering. At Trident, he uses a more advanced Hunter irrigation controller that makes adjustments based on weather conditions and can be adjusted from his smartphone.

“The nice thing about smart controllers is, they automatically do all the adjustments," said Bertauski, who writes a gardening column for The Post and Courier. "That’s fantastic for the homeowner."

Gardening: In celebration of Arbor Day, let's talk about what trees need to succeed

While watering appropriately can improve lawn and garden health and reduce water use, homeowners can still see large bills. That's partly because most water systems in the Charleston area apply both water and sewer charges to every gallon that goes through a residential water meter.

Homeowners with extensive irrigation needs might consider installing an irrigation meter, or an irrigation well. Both come with substantial up-front costs, but result in long-term savings.

“In Mount Pleasant and Isle of Palms we do a lot of wells for irrigation, because it doesn’t take long for a well to pay for itself," he said. “Generally, for under $3,000 you can get a well, a pump, a tank, a permit and an electrical hookup."

That's a substantial amount of money, but some people without wells spend hundreds of dollars each month watering their lawns.

“Doing a well, I say it will pay for itself in about two years," said Kevin Sneed, who said he's been drilling wells for 40 years. “You’re making about a $3,000 investment for free water for life."

One potential complication, he said, is that some newer subdivisions in Mount Pleasant prohibit wells because the water can be iron-rich, which can stain concrete.

Also, not every property is suitable for an irrigation well.

“You need to find sand, because water travels through sand," said Westendorff. "After many years of doing it, we pretty much know the good places."

“Most places, you can get a surface well," he said. "Some places, like Dunes West, it’s just clay, clay, and clay until you hit limestone."

Having an irrigation well doesn't mean having a stone structure with a roof and a bucket, like a wishing well. Instead, it's a small tank structure, a foot or two above ground, with hose connections.

Painting your dormant grass is another option to maintaining the appearance of green color in winter. It’s much less expensive, doesn’t require mowing, irrigation or fertilizer.