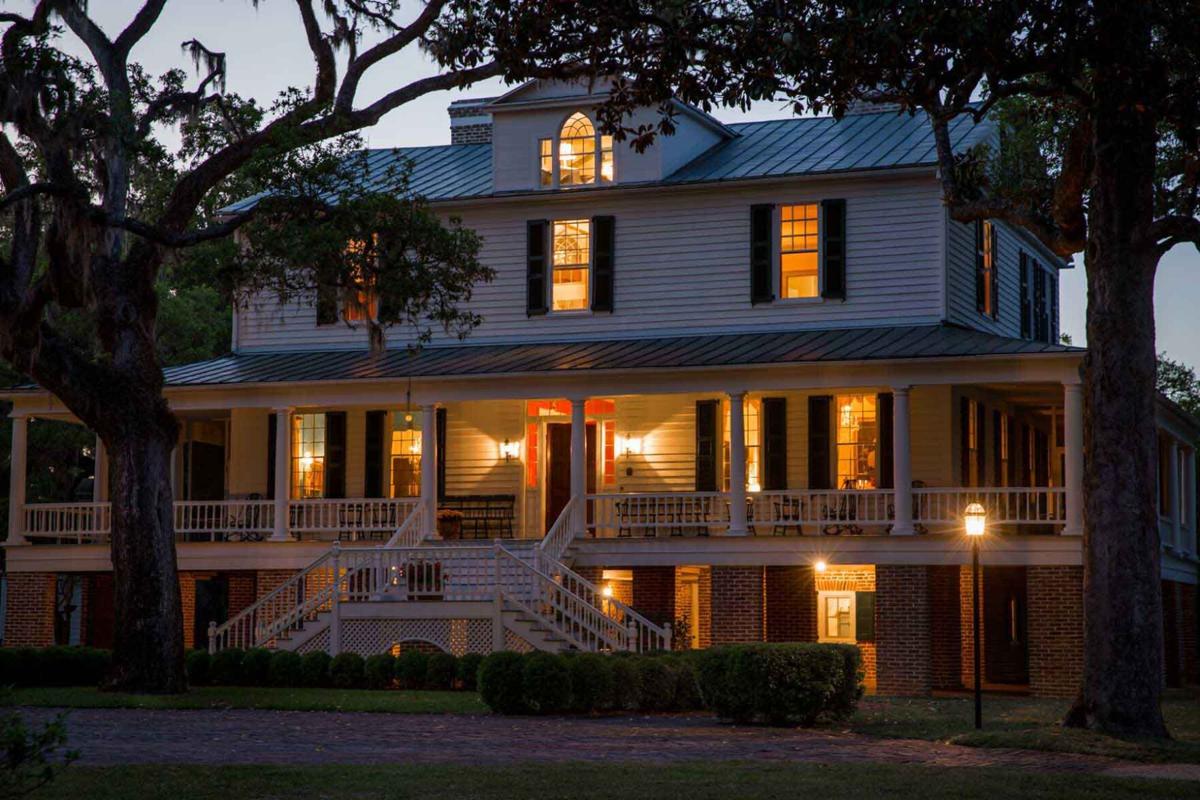 The Chicora Wood house dates back to the 1700s and was once home to a South Carolina governor. Hall and Hall/Provided 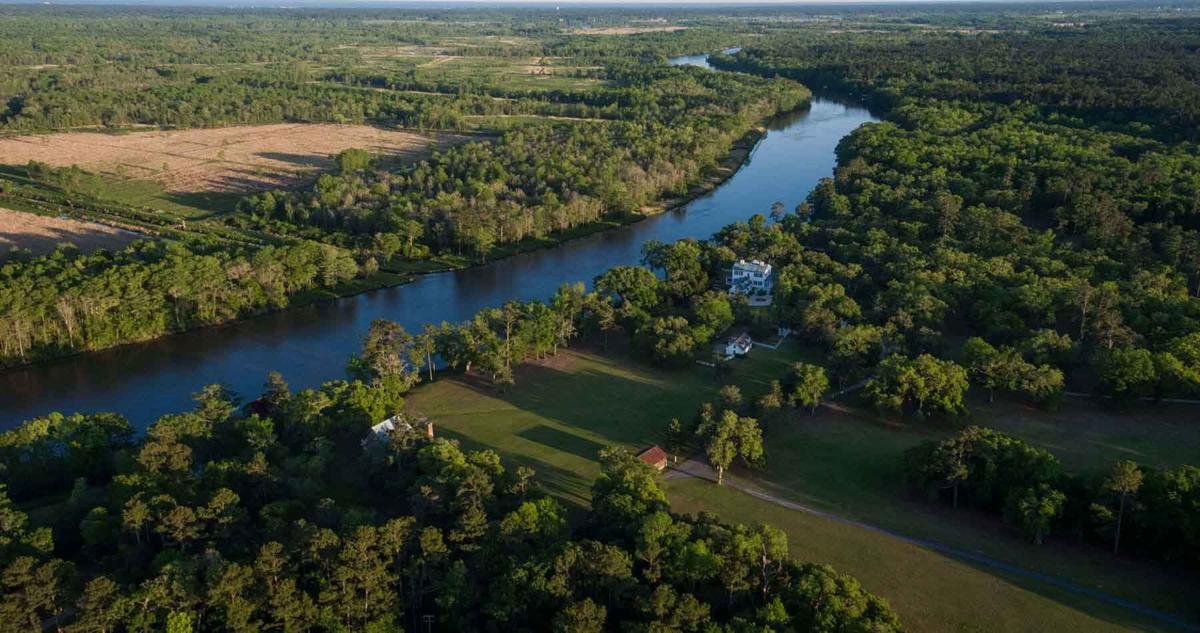 The main house at Chicora Wood, which dates back to the 1730s, sits next to the Pee Dee River in Georgetown County. The nearly 1,000-acre property, which straddles the river, recently sold for almost $9 million. Hall and Hall/Provided 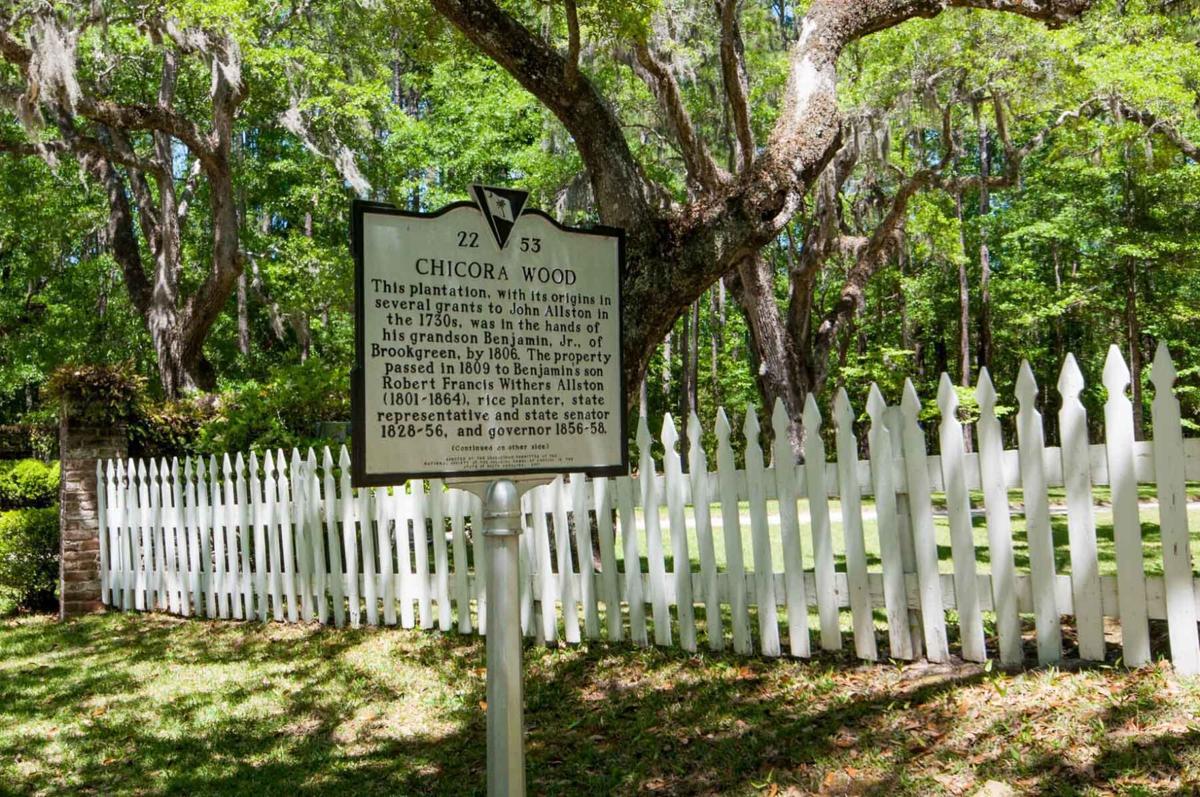 A marker tells some of the history for Chicora Wood, a rice farm that dates back to the 1730s in Georgetown County. Hall and Hall/Provided 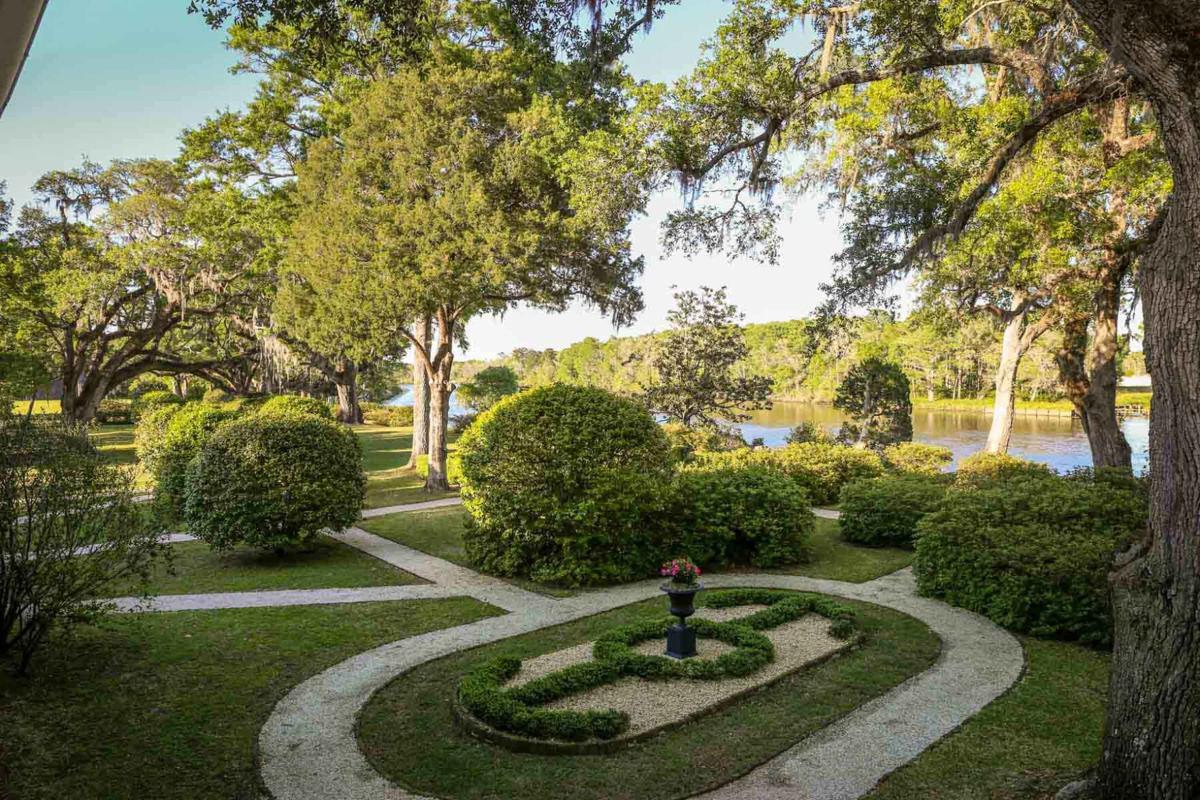 The garden at Chicora Wood in Georgetown County overlooks the Pee Dee River. Hall and Hall/Provided 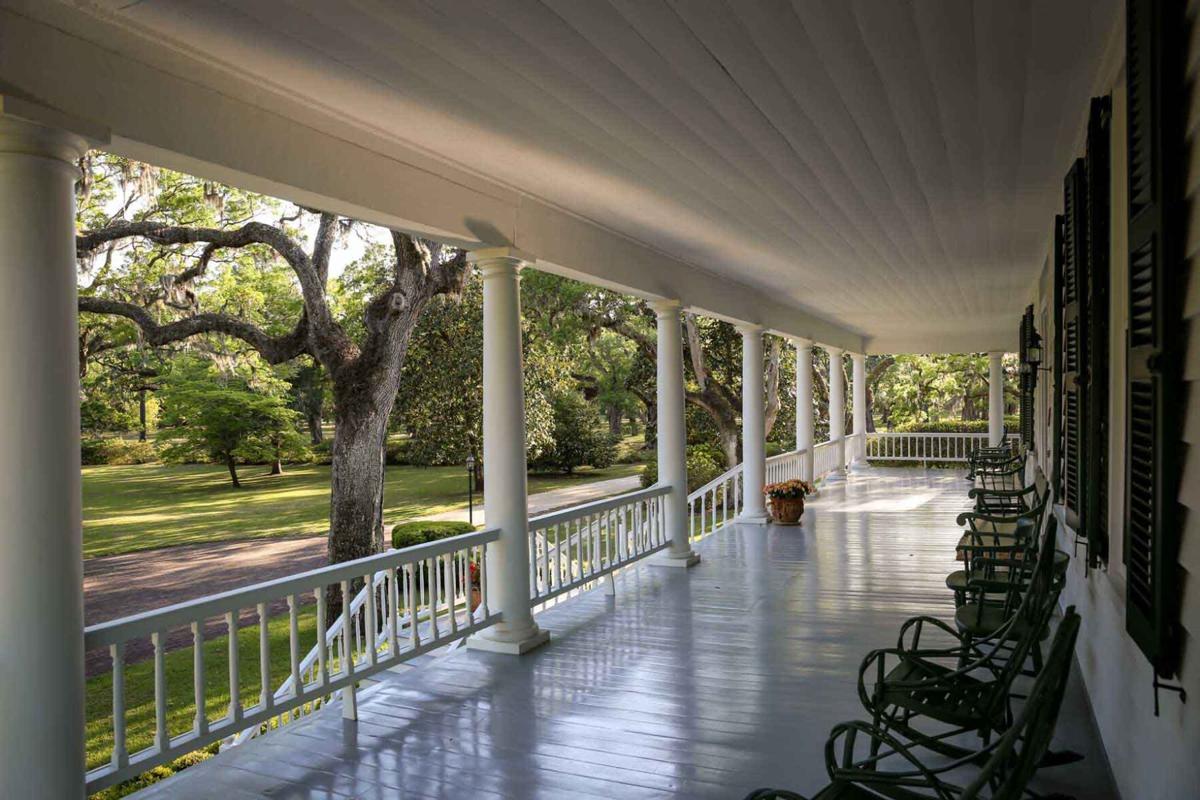 The porch at Chicora Wood offers sweeping views of the manicured grounds at the former rice farm in Georgetown County. Hall and Hall/Provided 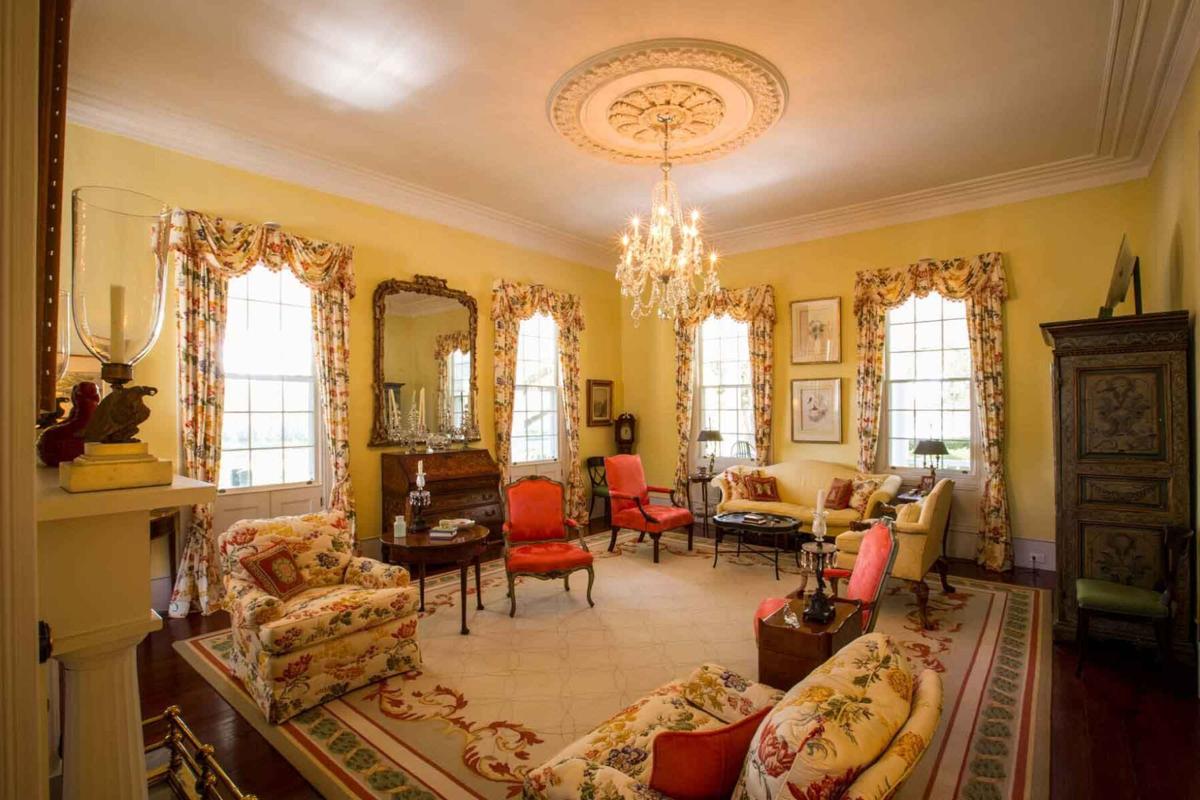 Chicora Wood, which dates back to the 1730s in Georgetown County, was fully restored by its previous owners in the 1980s. It recently sold for $8.9 million. Hall and Hall/Provided 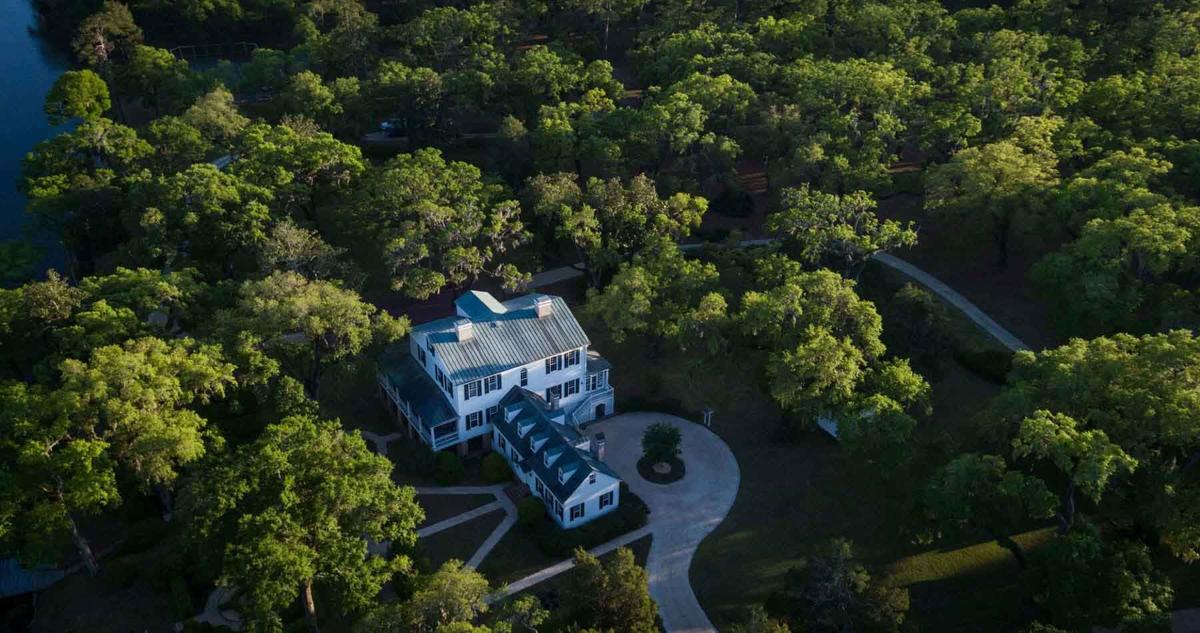 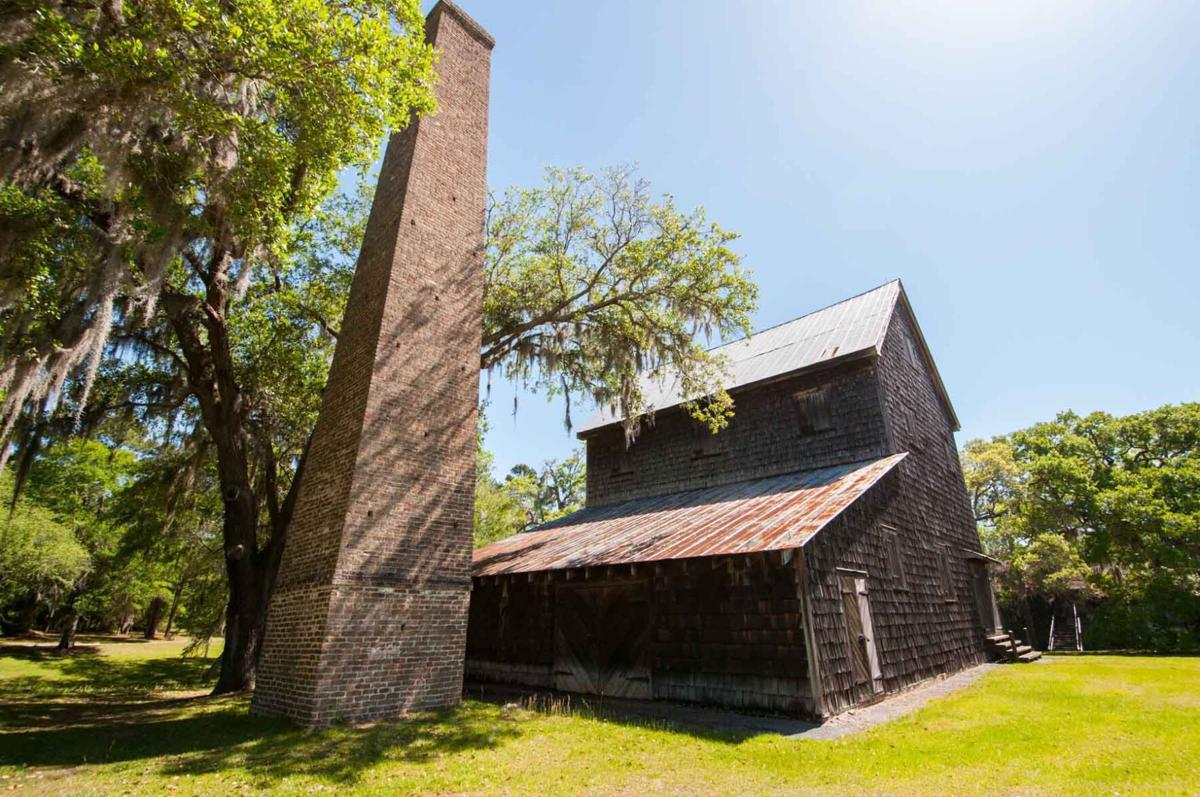 A chimney for the former rice mill stands next to a barn at Chicora Wood in Georgetown County. Hall and Hall/Provided

The Chicora Wood house dates back to the 1700s and was once home to a South Carolina governor. Hall and Hall/Provided

A marker tells some of the history for Chicora Wood, a rice farm that dates back to the 1730s in Georgetown County. Hall and Hall/Provided

The porch at Chicora Wood offers sweeping views of the manicured grounds at the former rice farm in Georgetown County. Hall and Hall/Provided

Granted by a king, once owned by a governor and farmed for its riches from rice, a former 1,000-acre farmstead in South Carolina's Pee Dee region is now in new hands.

A group of seven families from South Carolina and North Carolina came together and recently paid $8.9 million for the expansive Chicora Wood property, including a 10-bedroom house dating back to the 1700s.

The house overlooks the Pee Dee River, with property on both sides of the waterway that cuts through Georgetown County and carries boaters to Georgetown in about 20 minutes.

The previous owners, Jamie and Marcia Constance, bought the property for $1.38 million in 1984, when they embarked on 2½-year restoration of the 10,000-square-foot house and its 8½ bathrooms.

In 2013, they put it on the market for $15 million before cutting the price to $9.5 million shortly before the recent sale.

"They totally restored the property over the past 35 years, including its physical assets and conservation of the land," said Spartanburg resident Justin Converse, one of the new owners who is a descendant of the founder of Converse College and now heads up a coal ash and gypsum recycling firm called Converse & Co.

Converse, who also is the chairman of renewable fuel producer Repower South, said he and one of the other new owners, Mikee Johnson, president of Carolina Brick Co. in Columbia, were looking for an outdoor retreat when Johnson mentioned the Chicora Wood property.

Johnson had met the Constances when the former owners hosted a Nature Conservancy event at the Plantersville Road property in 2016.

"We knew the property had gotten a lot of attention from the Constances hosting events there," Johnson said.

Realizing there might be other suitors, Converse and Johnson initiated talks in February about acquiring the expansive tract.

"They were looking for the right buyer rather than the highest bidder," Johnson said. "We put in a number that was reasonable. It wasn't an adverse or difficult negotiation. They were excited to have somebody to continue their conservation work."

The other families in the purchase are silent partners, but each is an equal partner, Converse said.

With the property in hand, the goal now is wildlife enhancement, he said.

They also are pursuing protection of about 500 adjacent acres owned by Red Mountain Timber Co. through Birmingham, Ala.-based Resource Management Service. They hope to have the conservation easement completed by the end of the year.

The Chicora Wood tract, with a mile of frontage on both sides of the river, is located near other former large farms such as Rosebank, Exchange, Hasty Point and Weymouth, all under conservation easements to protect them from further development.

Chicora Wood also features a 2-acre lake and 2 miles of frontage on both sides of Chapel Creek.

Formal gardens were designed in the 1930s by Loutrel Briggs, a landscape architect responsible for developing Charleston’s distinctive garden style.

First called Matanza after a place in Cuba for more than 100 years, the property got its start through a land grant of 420 acres from King George II to John Allston in the 1730s.

Allston added more acreage over time, and the land was passed down through several family members in the ensuing years. The latest transaction is only the fourth outside of family in the property's nearly 300-year history.

In 1782, near the end of the Revolutionary War, the newly formed United States deemed owner Alexander Rose loyal to Great Britain and confiscated all of his property. He got it back only after petitioning that he was not a Tory and paying a fine of 12 percent on the land.

After Rose died in 1801, his estate's executors conveyed what had become the 922-acre site called Matanza to Benjamin Allston, grandson of the original owner.

Six years later, Benjamin Allston died and the rice farm was left to his young sons.

In 1832, one of the sons, Robert Francis Withers Allston, purchased his brother Joseph's ownership and became sole owner.

Six years later, he enlarged and remodeled the house, and in 1853 changed the property's name to Chicora Wood, a nod to the native Indians of the area.

A West Point graduate, Allston went on to serve in the South Carolina House and Senate before rising to governor in the late 1850s.

From the wealth of growing rice harvested with the help of enslaved labor, Allston amassed seven large farms and 13,500 acres, but Chicora Wood was his favorite and the one he chose as his residence.

When he died in 1864, his property went to his wife, Adele, but the devastation of the Civil War and the inability to pay hefty taxes on the holdings led to only one property remaining with Allston's wife. It was Chicora Wood.

When she and her daughter, Elizabeth, returned to Chicora Wood after the war, they found the house in shambles and its contents looted.

Only through the help of her daughter and a cousin in New York was Adele Allston able to repair the house and purchase supplies to begin planting again in 1869.

She died in 1896, and the farm had to be sold to settle debts of her estate. Her daughter, Elizabeth Pringle, bought it, but after her death in 1921, it passed first to her younger sister, Jane Hill, and nephew Elias Vanderhorst before they sold it to Duncan Cameron Waddell in 1926.

It remained with the Waddells and heirs until 1984, when the Constances bought it and restored it.

Before its sale, a broker with Hall and Hall real estate firm, which handled the sale for the sellers, called it "one of the most well-kept, historical properties on the Eastern Seaboard."

"We come across really interesting and historical properties regularly, but rarely, if ever, do we come across a historical home that is as inviting as Chicora Wood, which beckons to be used for family gatherings and entertaining friends," said Elliott Davenport, a Southeast affiliate of Hall and Hall in Chattanooga, Tenn.

Perry Peace of Peace/Sotheby's International Realty handled the sale for the buyers.

Of the former owners, Converse said, "We have big shoes to fill. They were good stewards of the property."