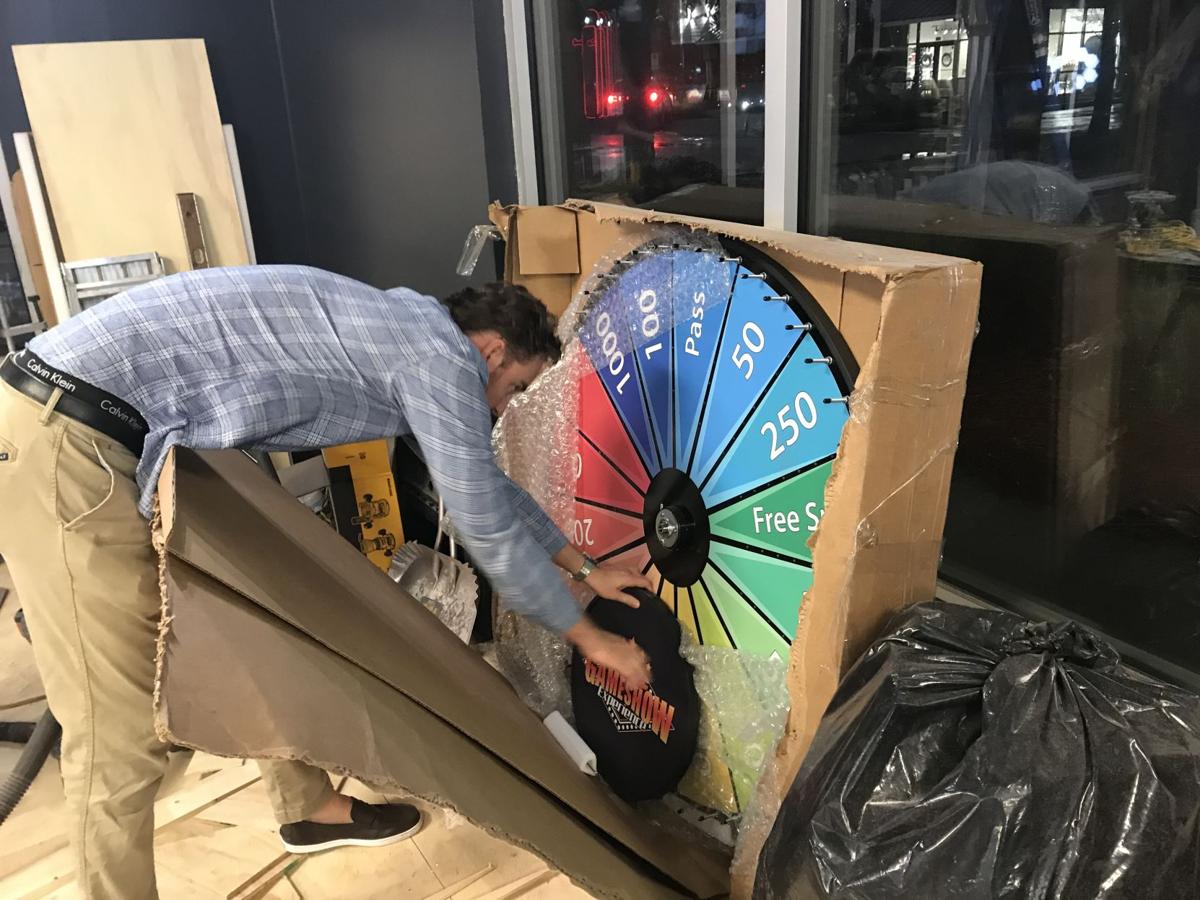 Jason Pap, owner and founder of a new entertainment venue called Game Show, looks over a prize wheel that will be installed in the new shop at 1200 Queensborough Blvd. in Mount Pleasant. Warren L. Wise/Staff 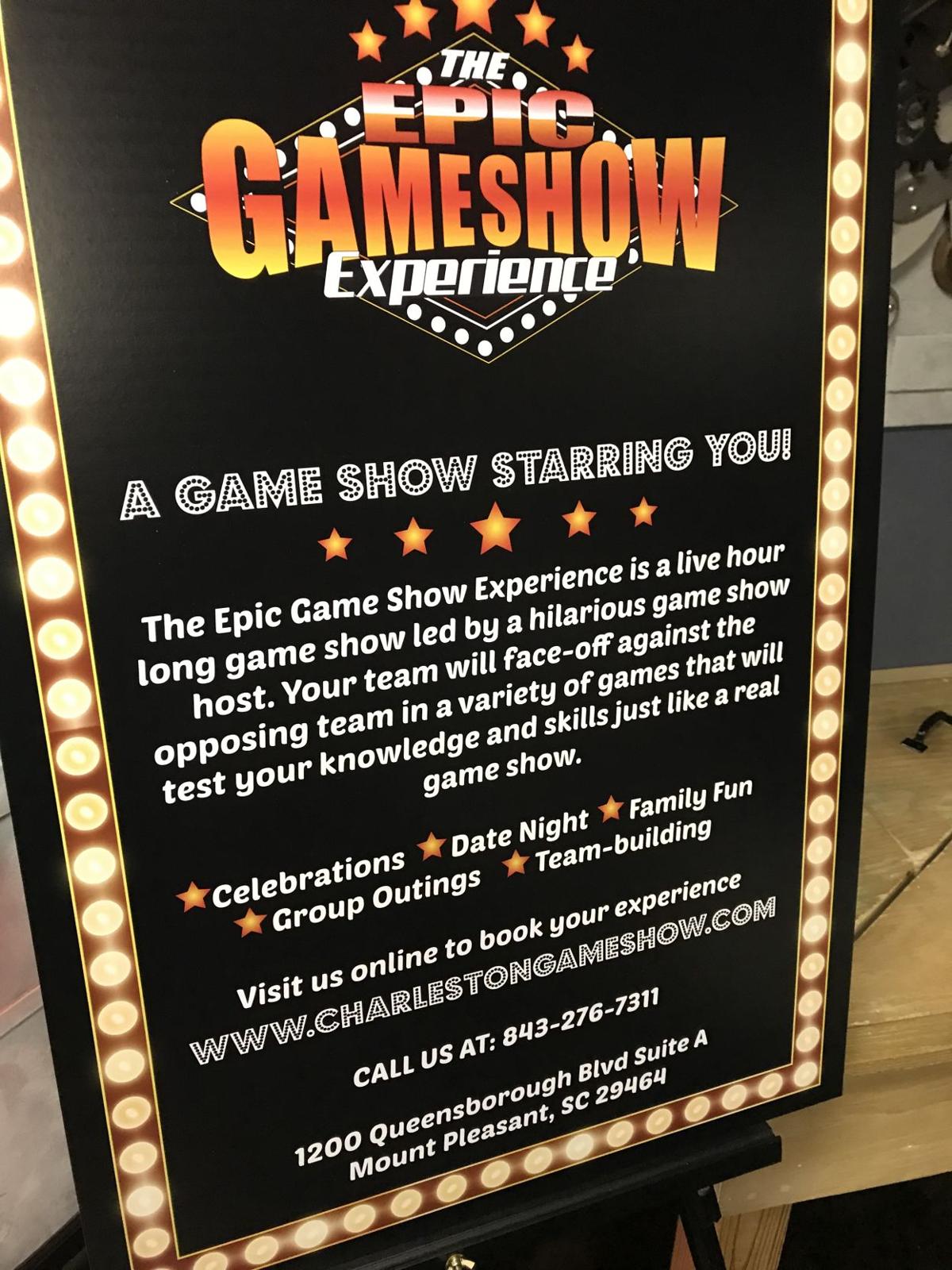 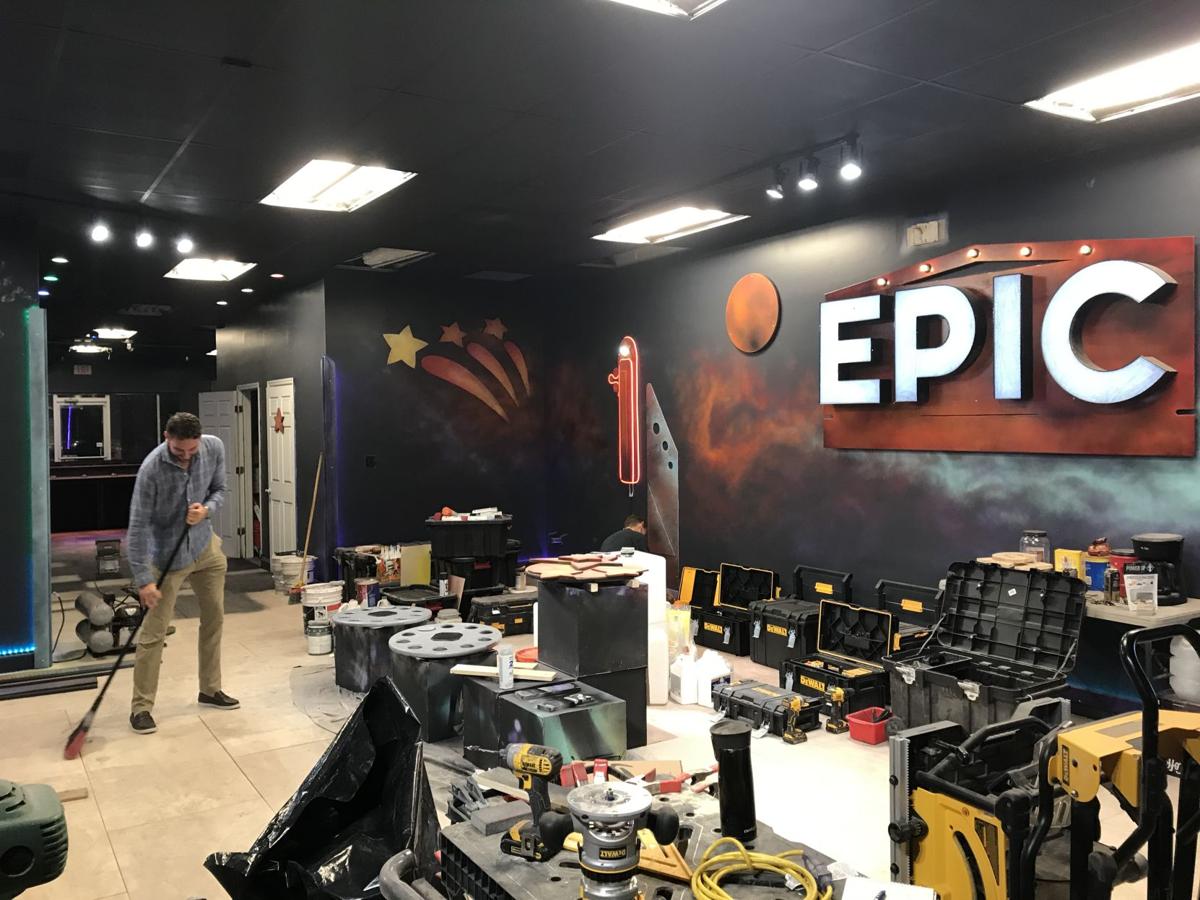 Game Show owner and creator Jason Pap tidies up part of the work area in the new entertainment venue under construction in Mount Pleasant. He hopes to be open by early January if not before. Warren L. Wise/Staff 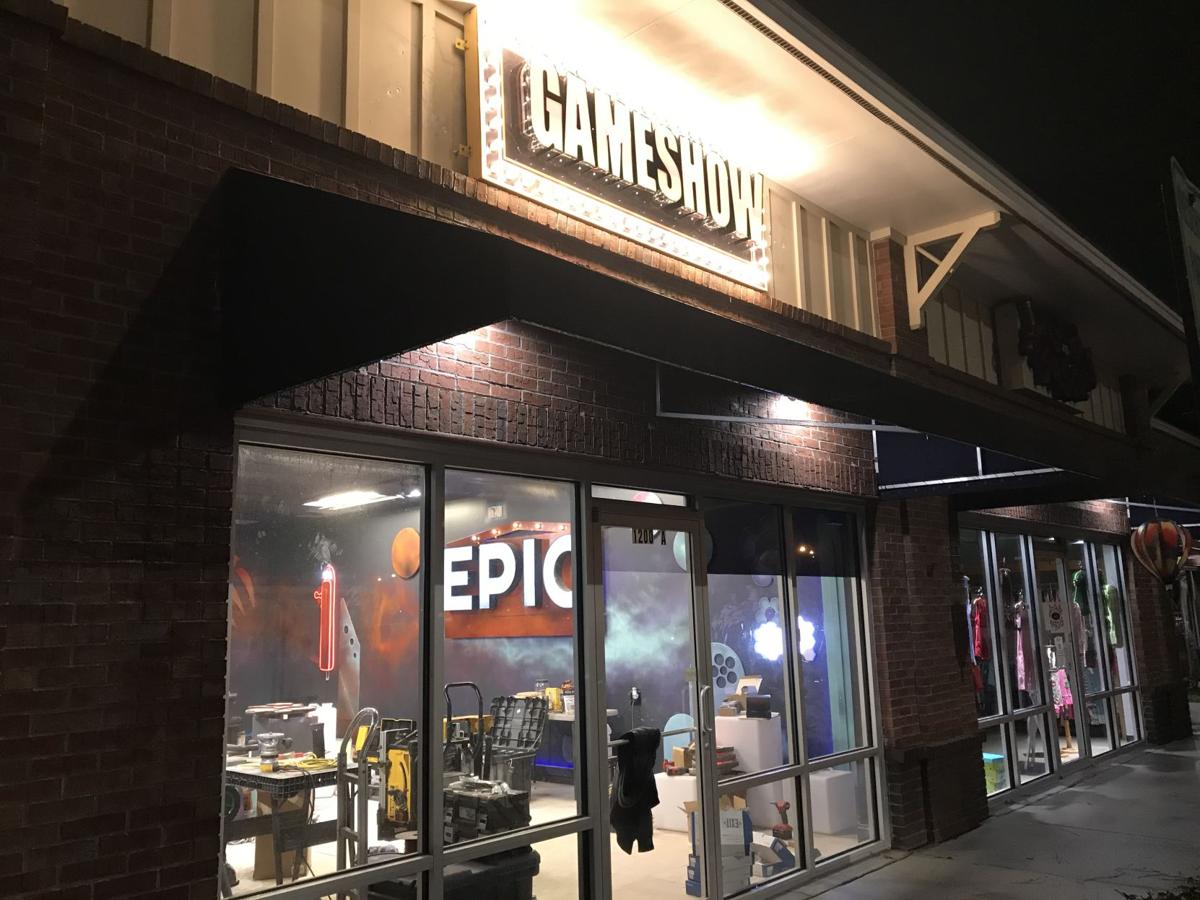 Game Show, a new entertainment venue based loosely on TV game shows, plans to open by early January, if not before, in Mount Pleasant. Warren L. Wise/Staff 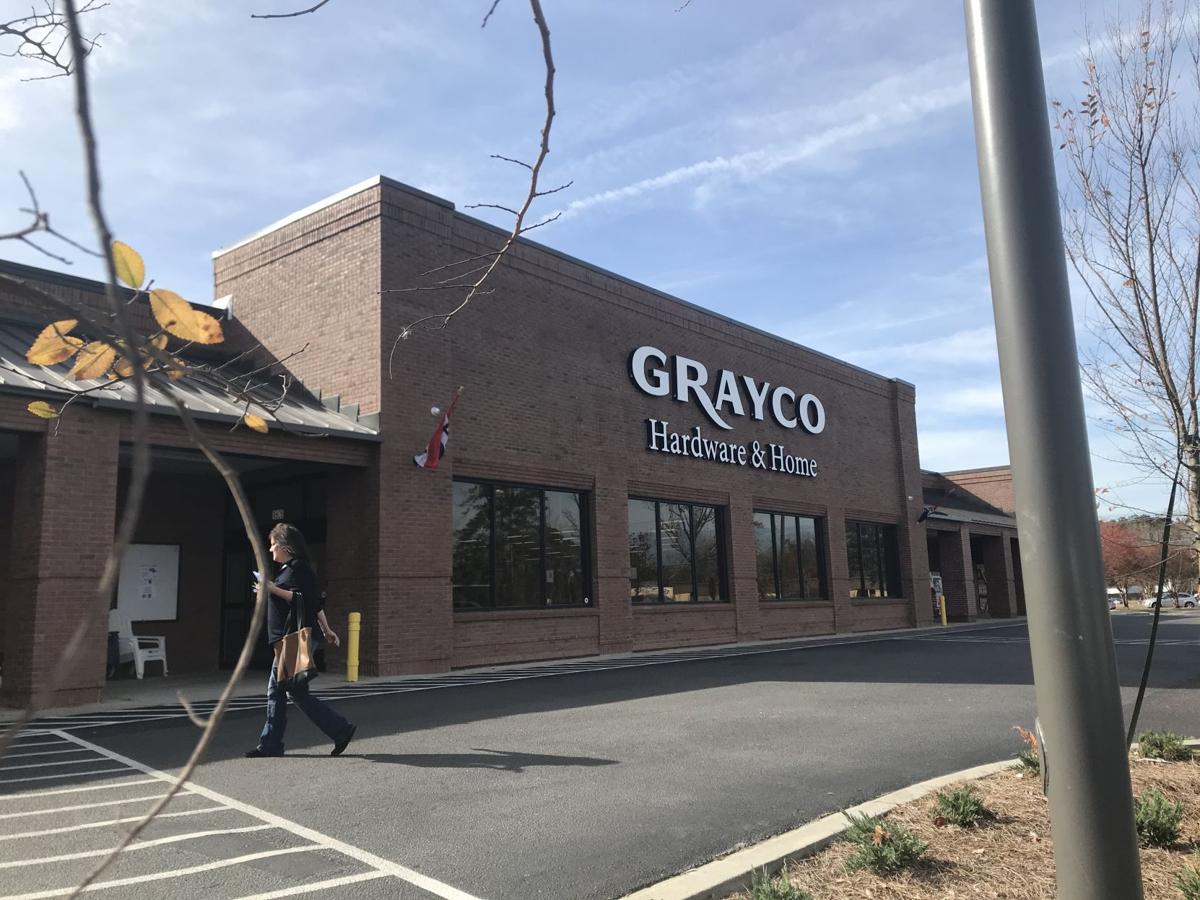 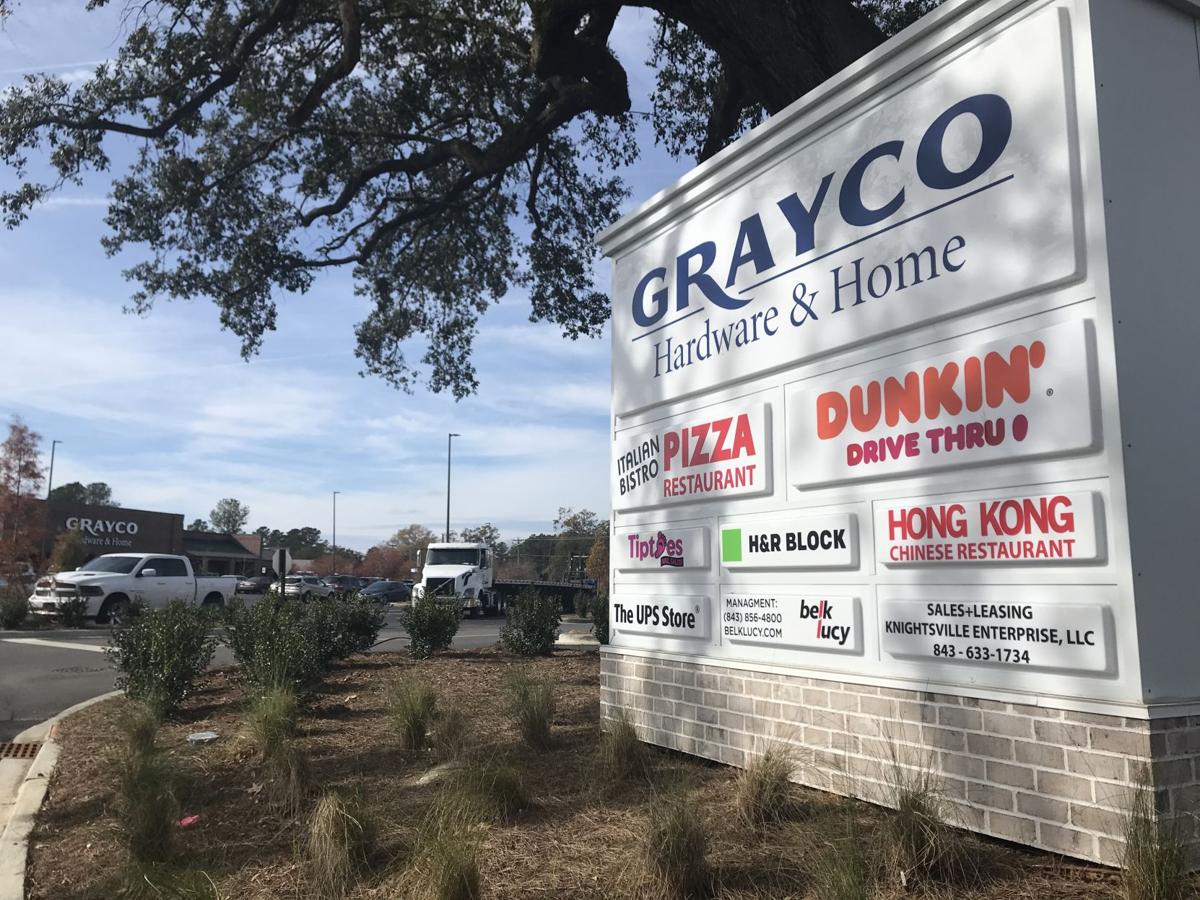 What is the name of a new entertainment venue in Mount Pleasant that incorporates elements of different TV game shows such as "The Price is Right," "Family Feud," "Jeopardy" and "Wheel of Fortune" in one setting?

The correct answer is Game Show.

The new 1,650-square-foot, one-of-a-kind business is the brainchild of Jason Pap, who founded Escape Games in Charleston, Mount Pleasant and Myrtle Beach and Chucktown Axe Throwing.

The 31-year-old entrepreneur called it a spinoff of the popular TV game shows, but with a twist.

"Family Feud" becomes "Friendly Feud." Instead of  "The Price Is Right," it's now "Is The Price Right?" "Wheel of Fortune" will be called "Spin the Thing."

The venue will have wheels to spin and buttons to press for answering questions, and the prizes will range from free admission to Pap's other venues to free drinks at a brewery, along with lots of giveaways.

Contestants, who must book in advance for admission for one-hour slots, will hear the joyous "beep beep beep" for a correct answer and the dismal "wonk wonk" for a wrong answer, similar to the sounds on TV game shows.

Pap said there's no limit to the games he can come up with.

"I want it to be fun and exciting," Pap said. "It can be a team-building experience, and it's designed to go head-to-head, too."

He said it's not so much about the prizes as the experience of people enjoying themselves in a lighthearted atmosphere.

To put a stamp on how much fun he believes the venue will be, he placed large lettering on one wall. It reads: "EPIC." It's not one of the games. It's just meant to display the "epic" experience people can have.

Another stage will be added near the "EPIC" sign, and other games could be coming as well, possibly something resembling the Plinko game on "The Price Is Right."

The cost of admission will be $30 per person for one hour, when two to four different games can be played. As many as 24 people can be playing at the same time. Alcohol is not offered in the venue, but Pap says it's something that could be considered in the future after he sees how the new project turns out.

On Christmas Eve, he and workers were still upfitting the corner space in the Publix-anchored Queensborough Shopping Center off Johnnie Dodds and Anna Knapp boulevards. He hopes to be open by Saturday, and, if not, at least by the new year.

The venue will be open noon to 10 p.m. seven days a week once it's completed.

Neighborhood Tap House is now open in Festival Centre Shopping Center beside Ocean City Chinese Restaurant at Ashley Phosphate and Dorchester Road in North Charleston. It's the second location for the bar and restaurant. The other is at 2110 Greenridge Road off Rivers Avenue.

A new auto parts store could be coming to the Ladson area of North Charleston.

Memphis, Tenn.-based AutoZone has applied to state environmental regulators for permits to add a 7,381-square-foot shop next to an existing Spinx gas station and convenience store at 3665 Ladson Road.

The corner site is on Palmetto Commerce Parkway across from Bojangles' chicken restaurant.

A former grocery-anchored shopping center in Summerville has now been completely transformed with a new anchor and outparcel tenant where none existed before.

Mr. K's Piggly Wiggly at 1605 Central Ave. was the dominant business in Knightsville Crossing Shopping Center until it pulled out in 2017, citing competition from a newly opened Walmart Neighborhood Market store across the street and a nearby Publix supermarket.

Recently, Beaufort-based Grayco Hardware opened in the former 28,000-square-foot former grocery store space, anchoring the strip of other service-related businesses and restaurants in the retail center. A Dunkin' donuts shop was added on one end as part of the redevelopment.

“We have been expanding our footprint on hardware and home stores, and the Summerville store met our demographic,” Grayco CEO Herb Gray said of the company's decision to locate in the Charleston region.

The new store is the ninth location for the hardware company. It now has three hardware and home stores, three lumber stores, two window shops and a millwork facility. Almost all of the locations are around Beaufort, Hilton Head and Savannah.

On an undeveloped outparcel, Savannah-based Parker's Kitchen built its first of 10 new stores coming to the Charleston region, bringing low-priced gasoline, hot food offerings, an outside cabana for dining and vine-supporting trellises next to its gas pumps.

Look for the new shop at 1708 Towne Centre Way, beside Men's Wearhouse and up the street from Barnes & Noble Booksellers in Mount Pleasant Towne Centre.

Charleston Custom Carts recently opened its second shop and service center in a renovated 9,000-square-foot building at 1161 S.C. Highway 41 in northern Mount Pleasant, near the juncture of U.S. Highway 17.

Its other location is at 2300 Clements Ferry Road, which opened in February, north of Daniel Island.

The business is an authorized Yamaha and Epic Cart dealership and provides new, used and refurbished golf carts and street-legal, low-speed vehicles.

The new art school will become The Blair Center for the Arts. Creative Arts of Mount Pleasant owner Kathleen Fox said the new owner will take over classes Jan. 1.

Blair plans to expand the school’s offering to include airbrushing, digital arts and weekend workshops with international artists.

As for Fox, she is buying a Sprinter van and plans to tour the U.S. next year.

Upon returning, she wants to travel to the most rural school districts in South Carolina and offer no-cost art residencies and classes to elementary and middle schools.