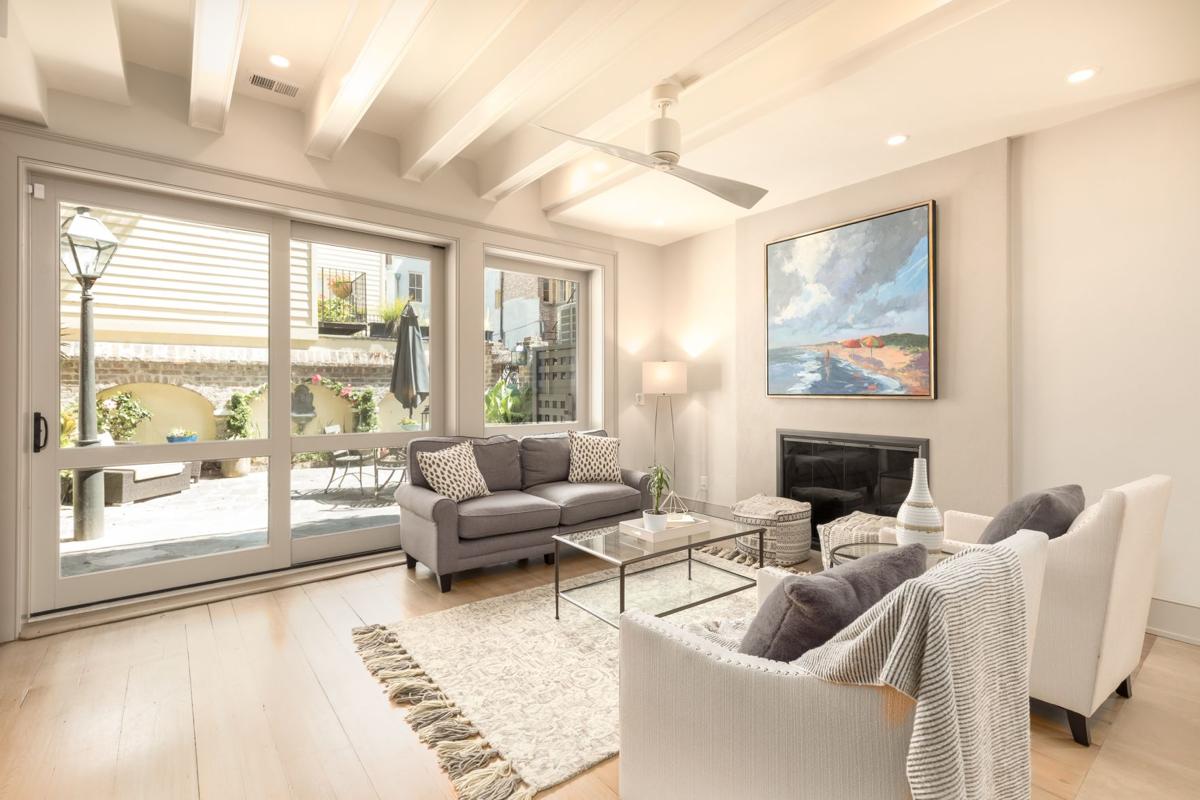 The main level is ideal for entertaining, as the living, dining and kitchen spaces lead directly to a spacious outdoor courtyard. Photo/William Means. 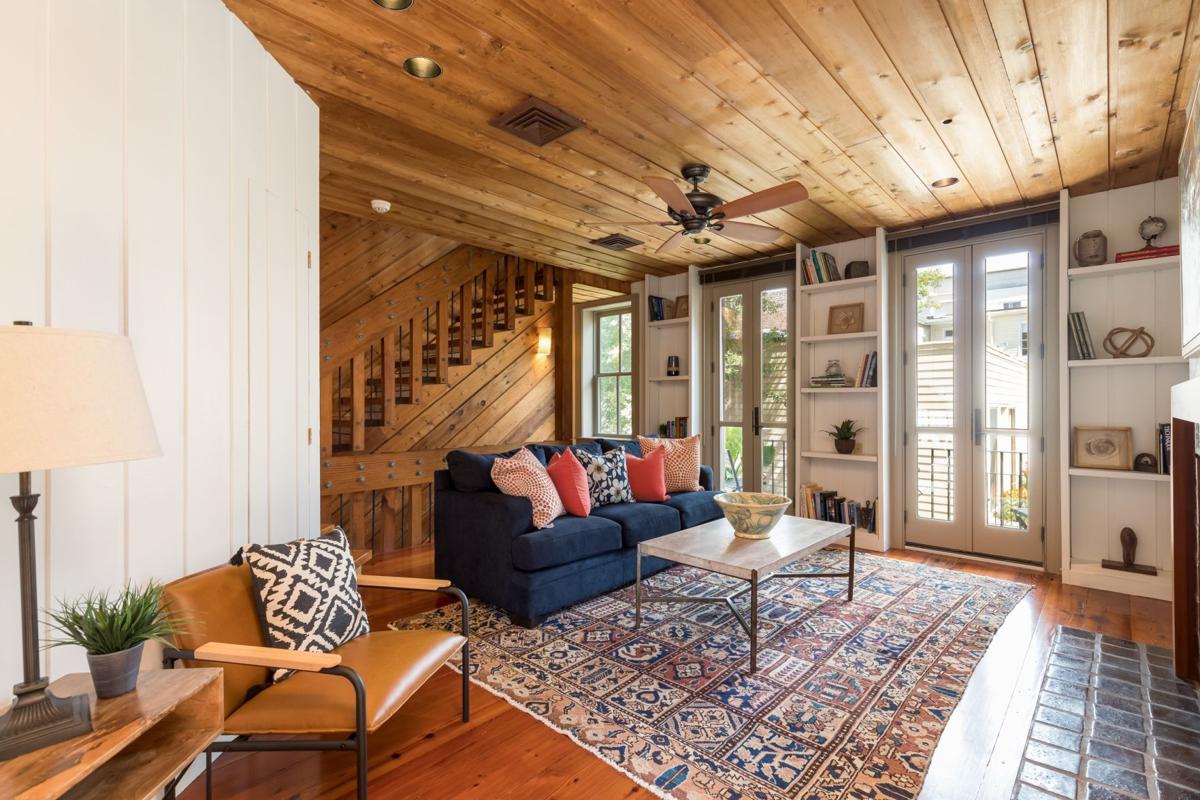 The second level has plenty of windows and an intimate outdoor porch that overlooks the courtyard. Two fireplaces are on this level. Photo/William Means. 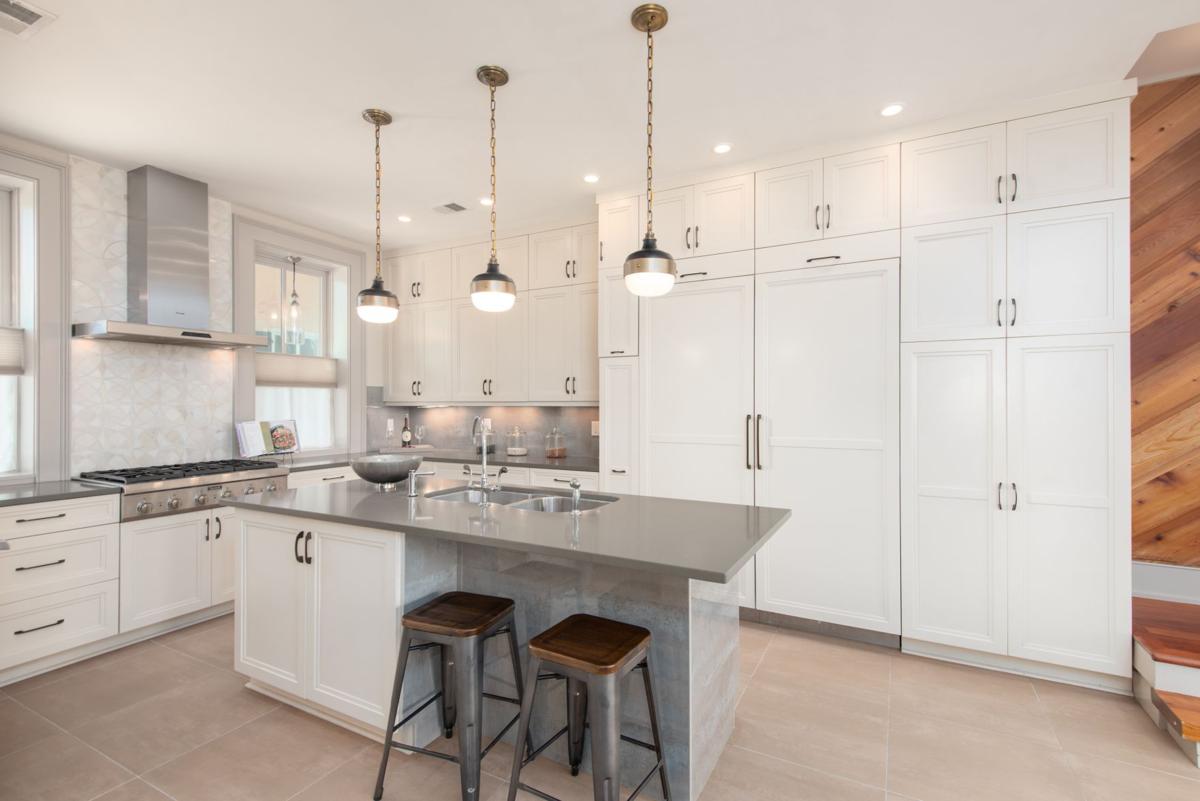 The sleek and modern kitchen is all white with grey quartz countertops. The warm tones of the suspended staircase and wall constructed of cypress planks balances the design's palette. Photo/William Means. 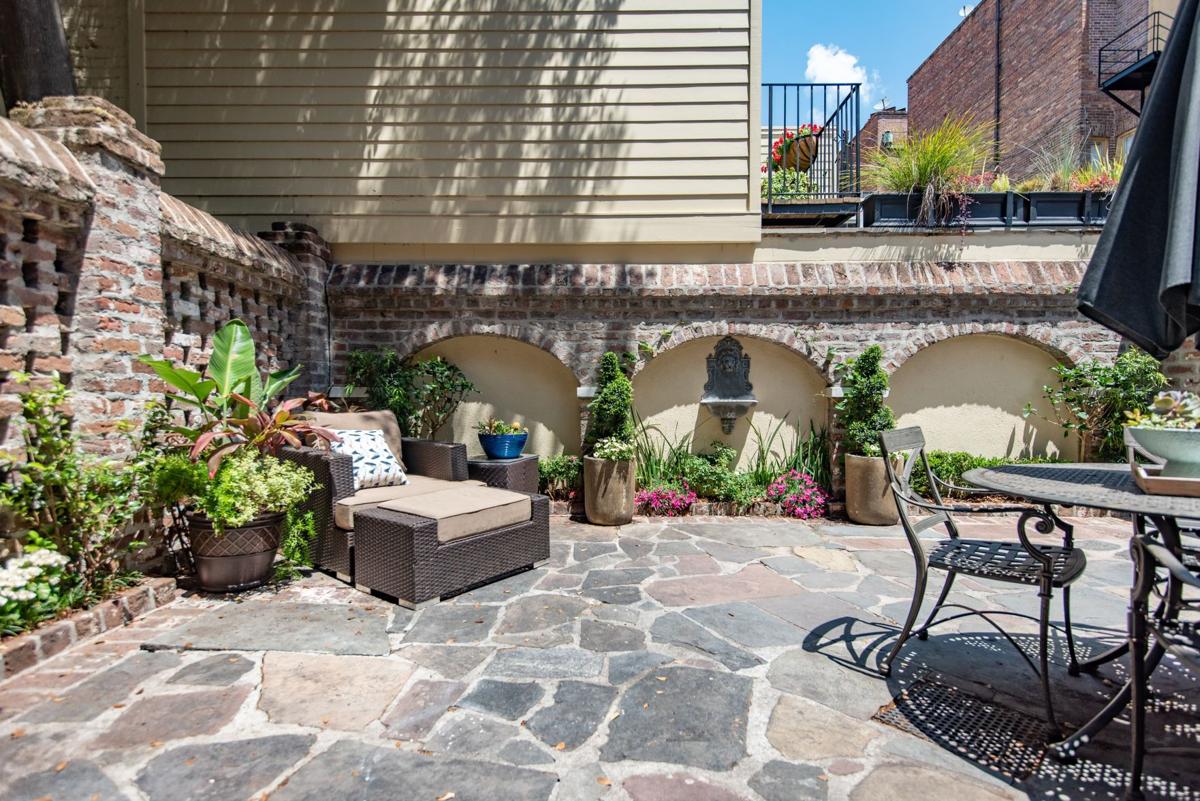 The townhome has the absolute must-have for Charleston living -- an lovely outdoor area for entertaining. Photo/William Means. 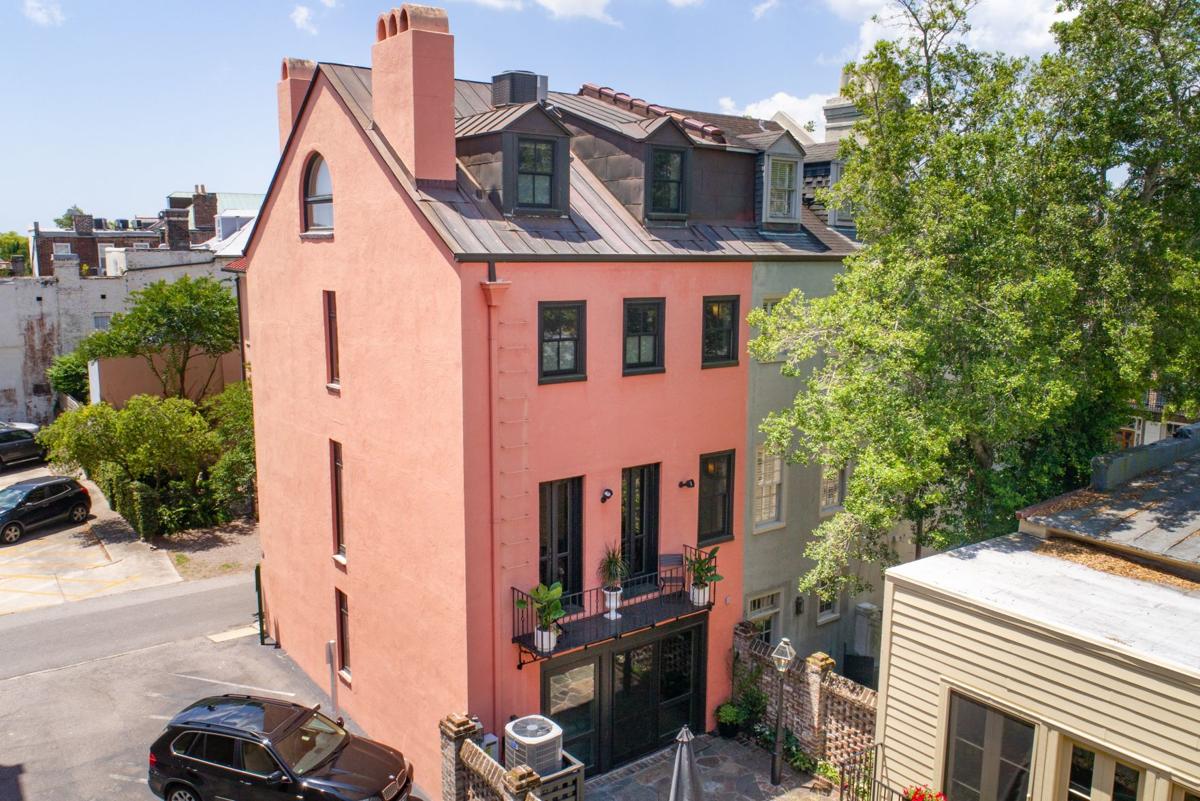 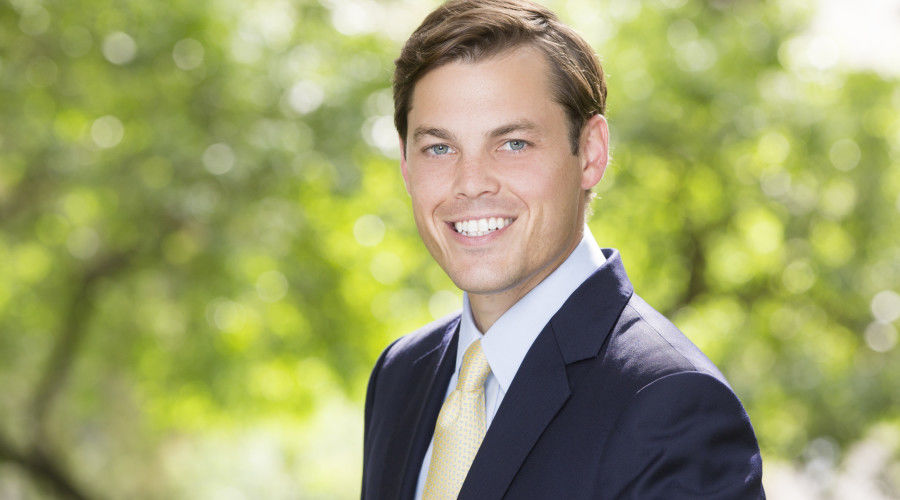 The main level is ideal for entertaining, as the living, dining and kitchen spaces lead directly to a spacious outdoor courtyard. Photo/William Means.

The second level has plenty of windows and an intimate outdoor porch that overlooks the courtyard. Two fireplaces are on this level. Photo/William Means.

The sleek and modern kitchen is all white with grey quartz countertops. The warm tones of the suspended staircase and wall constructed of cypress planks balances the design's palette. Photo/William Means.

The townhome has the absolute must-have for Charleston living -- an lovely outdoor area for entertaining. Photo/William Means.

Downtown Charleston is world-renowned for its beautiful homes, culinary choices and friendly people. Our fair city has become accustomed to being the star of South and sometimes, its residents and the places in which they live become Hollywood famous.

If you watch “Southern Charm,” a television reality show broadcast on Bravo, you’ve undoubtedly seen the pink house at 36 Elliott Street. One of the characters of the show, Kathryn Dennis, rented the home during the current season.

Now on the market for sale, the 2,862 square foot townhome located on a small quiet street is just one block south of Broad Street, one of the city’s premier locations.

“The location is a walker’s paradise,” said Lyles Geer of William Means Real Estate. “Elliott Street is more of an alley than a street, keeping it quiet and traffic light. Within a block, you can find a café and bakery, an upscale wine and cheese shop, fine dining establishments, several banks, fine art galleries and museums and a few boutiques.”

Though the home melds magnificently with Charleston-inspired architecture, the lot was purchased from the Historic Charleston Foundation in 1976 for $45,000 by Douglas Parham, Jr.

“The home was built by Parham in the 1970s,” Geer said. “He designed the exterior to be congruous with the appearance of a home that may have been built some 200 years earlier when this part of town was within the Colonial-era fortifications, or the Old Walled City. The English row house was popular during that time in Charleston’s history because European settlers were familiar with the style. With a shared wall, it was also cheaper to build and it was a creative response to the increasing scarcity of space within the confines of the fortifications.”

The shared wall in the townhome is constructed of concrete cinder block which makes it noise resistant and is just one aspect of its thoughtful design. Curved walls and a gorgeous suspended staircase of cypress planking are unique elements of the home’s interior. The staircase, an architectural and engineering marvel, ties all four levels together from the top floor. Staircases are typically built off the ground floor.

Industrial grade metal trusses span the entire length of the home to support each floor. “Metal trusses are a much stronger support system than standard wooden construction and allows for a greater span across the property,” Geer noted. “This is how the open floorplan on the ground floor was possible, which is great for entertaining.”

The home underwent recent renovations by local contractor Evan Diament which included employing LEED guidelines. Flooring is low emission, carpets are 100 percent wool, paint is zero VOC and kitchen cabinets and doors are formaldehyde free. Not only is the home a healthy one, but with its high-SEER HVAC installed on first and second floors, LED lights and top-of-the-line total house water filtration system, it is an energy-efficient one as well.

“There are actually five levels to the home if you included the basement,” Geer explained. “The basement level’s ceilings are too low to be livable space, but it is partially finished with a half bath – which doesn’t have low ceilings — at the bottom of the stairs. There’s a children’s play area and nook, along with two storage rooms. This space would also make a great wine cellar.”

Open and opulent, the ground level comprises a gourmet chef’s kitchen of custom white cabinets, a large island, grey quartz-topped countertops and Thermador appliances which open to the dining and living space. Tall windows on three sides of this space let in tons of light. A wood-burning fireplace makes a subdued and modern statement in the living area and large sliding glass doors lead to a 400 plus square foot private and irrigated courtyard. A separate entrance through a wrought-iron gate allows guests to enter into this private, brick-walled area. This is Charleston indoor and outdoor living at its best.

The second level is a cozy sitting area with fireplace, bookcases and access to a small porch that overlooks the courtyard. Cypress planking, used in the suspended staircase, adorn the ceilings of this space. Around a curved wall is a light-filled space, with fireplace that is the perfect spot for a home office.

“Since the trusses are metal, walls can be removed should a homeowner want to open some of the levels up even more, such as making one a very large master suite of its own,” Geer stated.

Each level has windows everywhere in order to take advantage of the light and the Charleston city views, especially the top level. The large bedroom has bamboo flooring and windows line three walls. Charleston’s varied rooftops and rainbow colors are the view in this top-floor oasis.

“Nearby parks include White Point Gardens, Washington Park and East Bay Playground that has a dog park and tennis courts,” Geer said. “This neighborhood is the oldest and truly one of the most beautiful parts of the city.”

If you’re going to live in downtown Charleston, it doesn’t get much better than this. Charlestonians pride themselves on their neighborhoods, stunning architecture and of course, Southern charm.