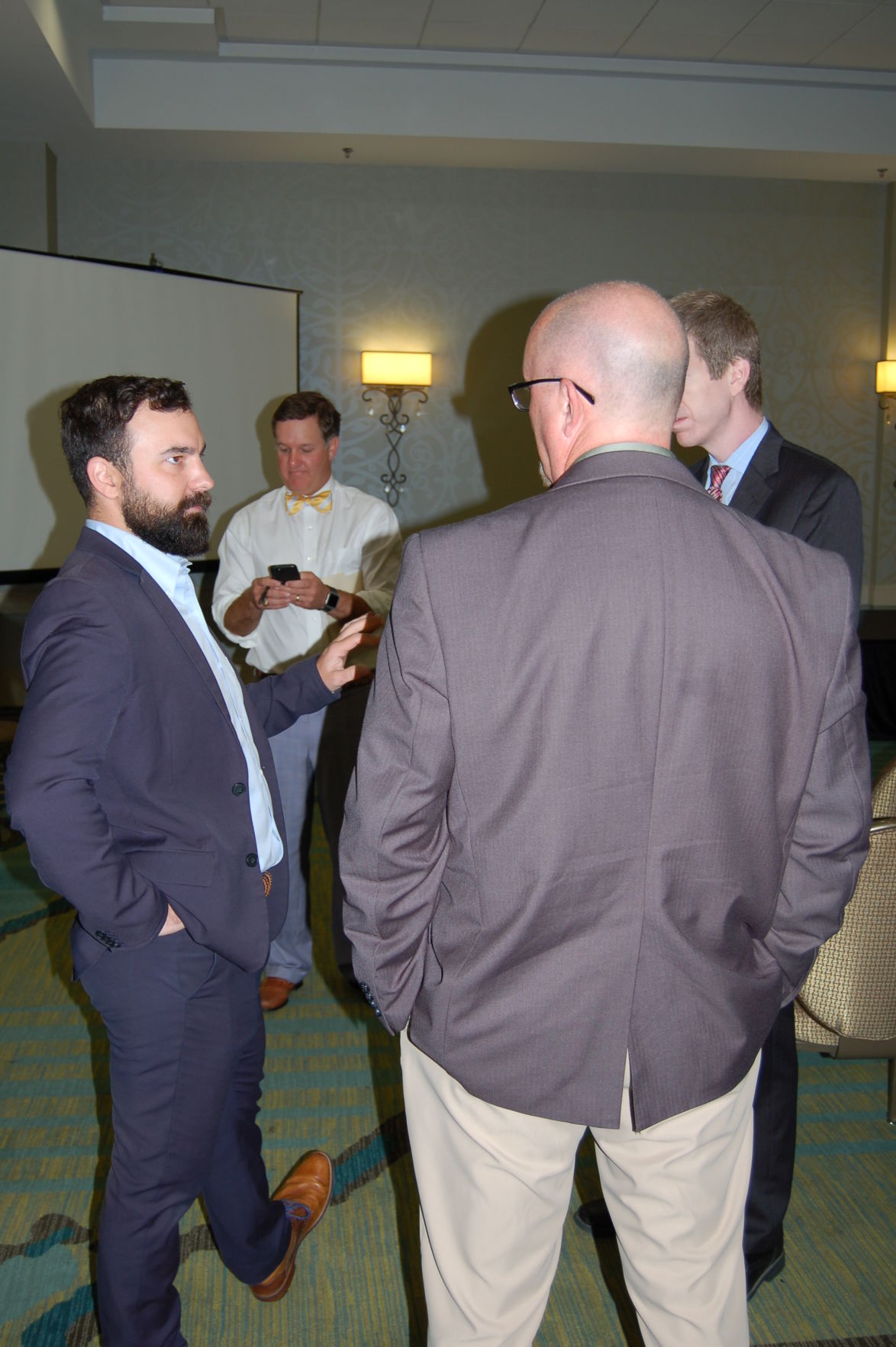 Patrick Arnold (left), executive director of the Charleston Home Builders Association, talks after a breakfast updating industry specialists on the local new homes market. In the background is Will Jenkinson, broker-in-charge of Carolina One New Homes and at right is USC research economist Joseph Von Nessen. 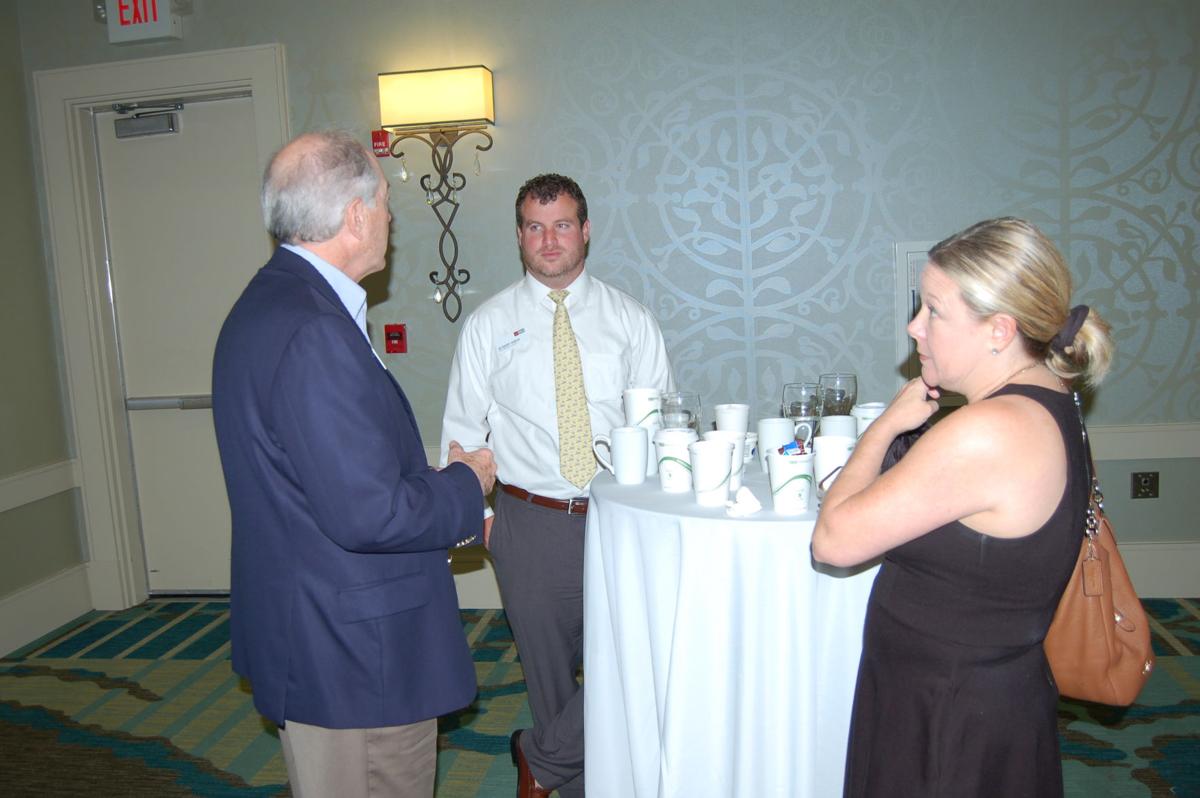 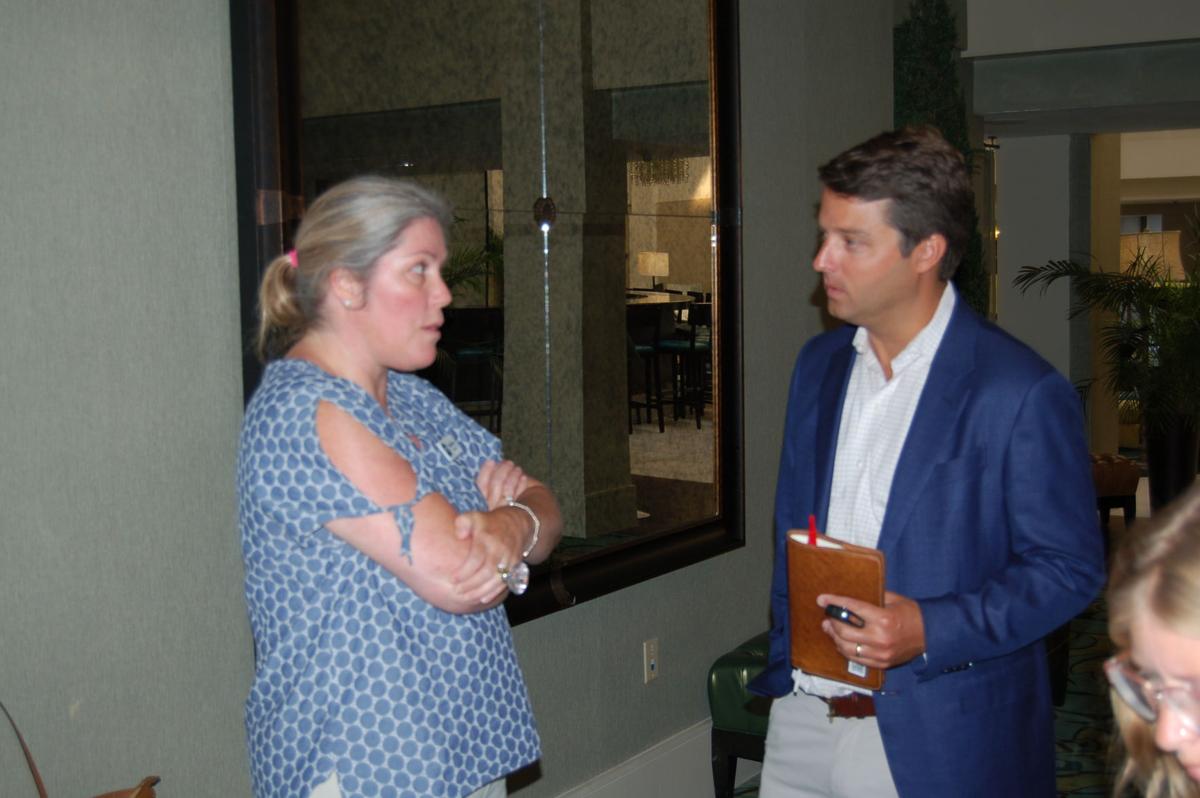 Will Herring (right), of Hunter Quinn Homes and president of the Charleston Home Builders Association, was among the members at the new homes market report.

Patrick Arnold (left), executive director of the Charleston Home Builders Association, talks after a breakfast updating industry specialists on the local new homes market. In the background is Will Jenkinson, broker-in-charge of Carolina One New Homes and at right is USC research economist Joseph Von Nessen.

Will Herring (right), of Hunter Quinn Homes and president of the Charleston Home Builders Association, was among the members at the new homes market report.

It's a peek at the past decade, snapshot of the present and vision of the months ahead — as fashioned by a state think-tank economist and local real estate broker.

Known as the Charleston New Homes Market Update, the event July 31 at the Crown Plaza Hotel in North Charleston unveiled 20-20 outlooks on the national, state and metro Charleston economy; and forecasts of housing market strengths and weaknesses through 2018.

"We are tracking right where these guys are saying," says Harry Smith, mortgage manager with Well Fargo in the Lowcountry. Home loan originations are plentiful in 2018; "refinances are fading away" now that interest rates are on the rise, he says. "We are following the purchase business. We're right there with the 40 percent new construction."

Smith was among dozens of housing-related managers, contractors and financiers who graced the midweek breakfast, which included the Charleston Home Builders Association as host and The Post and Courier among sponsors. Jenkinson and Von Nessen — who also works for Resh Marketing in Columbia — zeroed in on residential real estate trends, including how they interact with employment and jobless totals. Jenkinson's graphics stem from Charleston-based Real Estate Information Service, which pulled together reports for a New Homes Review.

The USC economist pointed out that the national economy has grown steadily since June 2009, marking the second longest expansion since World War II. Only the March 1991-2001 decade bests the current boom, according to the U.S Bureau of Economic Analysis. At the same time, the Dow Jones Industrial Average surged to 12,500 in 2012 and doubled in the past six years to 25,000-plus. Gross domestic product growth jumped 4.1 percent in the second quarter, the third highest level since 2010.

Population drivers, according to Von Nessen, are made up of job seekers' searching for work, people hunting for more affordable housing and baby boomers seeking a mild climate and lower cost of living. Based on Census Bureau in-migration figures 2011-15, the Charleston area's population growth outstrips statewide totals in every category from age 30 to 85-plus. The most sizable increase was 8 percent for ages 70-74.

Statewide employment by job sector sees construction topping out in 2016-17 with a 5 percent surge in numbers yet dropping 3.5 percent for 2017-18, according to the U.S. Bureau of Labor Statistics. Taking its place for leading job gainer for last year and this was leisure and hospitality up 4.4 percent. It rose just 2.1 percent two years earlier.

The Federal Housing Finance Agency Price Index, which tracks home costs in cities nationwide, rose 9.3 percent in the Charleston area in first quarter 2018, not far below the peak 11.8 increase since 2010 in first quarter of last year.

A couple of factors have put pressure on home building. Tariffs on Canadian lumber pushed up a "framing lumber composite index" by 58 percent from January 2017. Also rising builder costs are an opposing economic force to increasing employment and wage growth, Von Nessen says. This year's employment-to-home building permits ratio increased 1.4 percent, well clear of the 0.35 percent decline in 2011 but trailing the 3.1 percent boost in 2012.

Employment growth looks to trend downward nationwide in the fourth quarter to 1.6 percent, from a 2.7 percent high in first quarter 2016, the Moore School of Business division of research notes. Bureau of Labor Statistics figures show average hourly earnings growth in South Carolina shot up 4.9 percent in May, but the economist's graphic has a question mark on where paycheck amounts will go from here.

In the new homes review, Jenkinson notes that 77 percent of residential transactions in the Charleston area are resales, with the highest new home share in Berkeley County at 35 percent. Sale closings hit the highest monthly total so far this year in June at 404, which trails the 425 deals a year earlier. On a "heat map" showing residential sales concentrations, Johns Island proves the most active now.

James and Johns islands report the most neighborhoods "in the pipeline" at 23 followed by 20 in Mount Pleasant, 16 apiece in North Charleston-Daniel Island and Berkeley-Dorchester counties and nine in West Ashley-North Charleston, according to Jenkinson. The hottest markets as of 2017 are north of Wassamassaw in western Berkeley County near Interstate 26.

Why are so many hotels rising in Charleston? We found 12 reasons.

Charleston is seeing the greatest hotel boom in its history, and there are at least 11 reasons why.