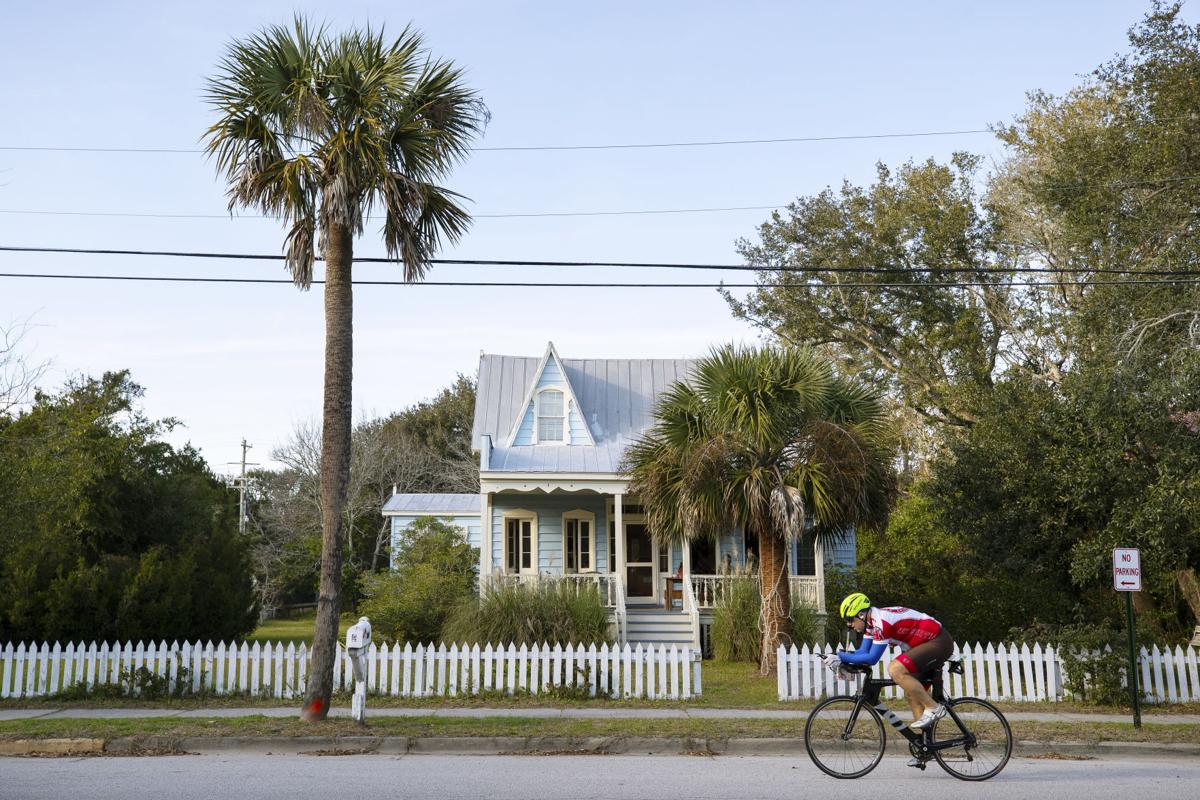 A bicyclist rides past a palmetto tree marked for removal by Dominion Energy on Wednesday, Jan. 15, 2020. Dominion is planning to cut down nearly 250 palmettos on the island. Lauren Petracca/Staff 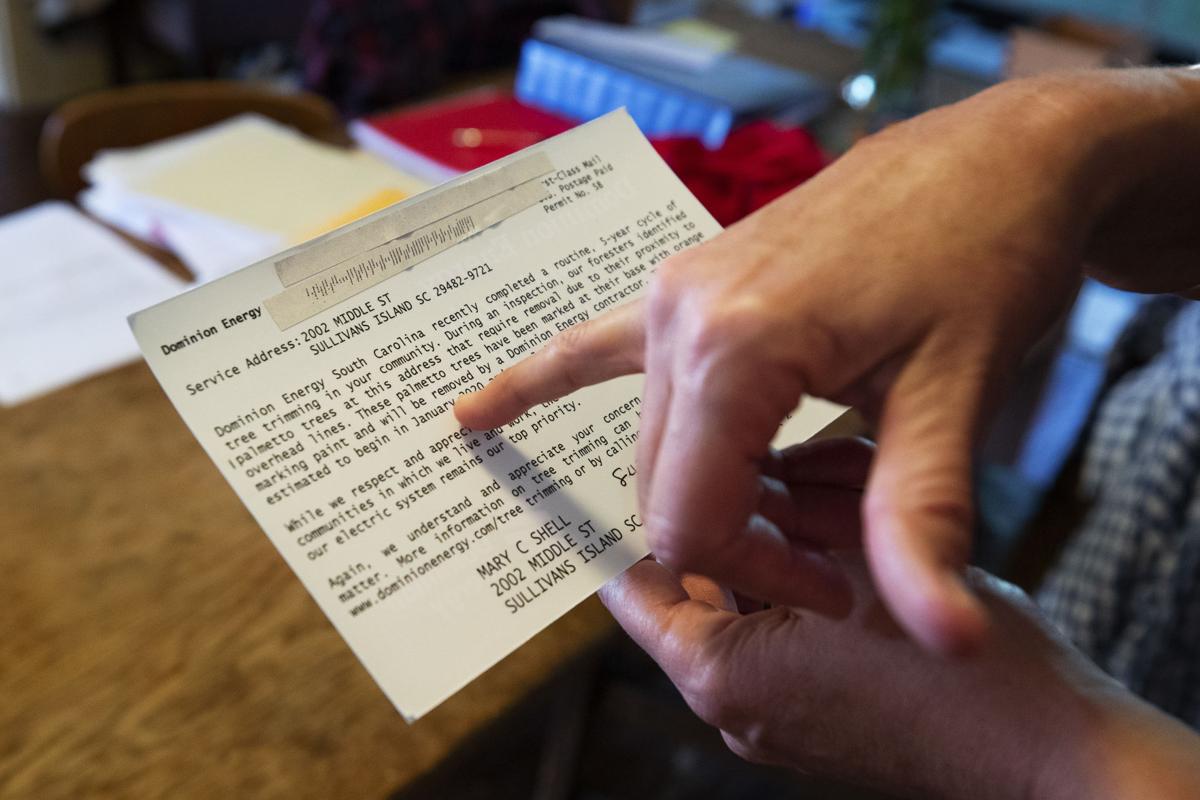 Callie Shell holds a letter from Dominion Energy notifying her that they will be taking down a palmetto tree in front of her home on Sullivan's Island on Wednesday, Jan. 15, 2020. Lauren Petracca/Staff 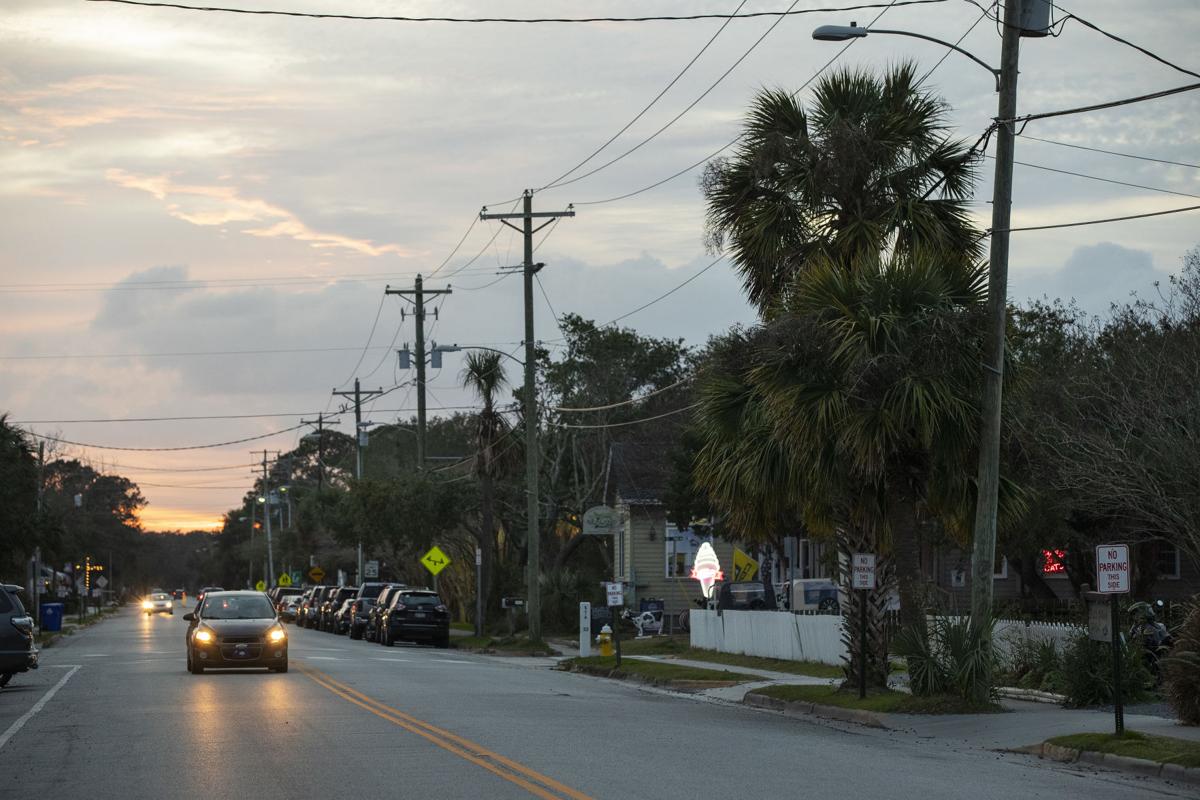 Palmetto trees line Middle Street on Tuesday, Jan. 14, 2020. Dominion Energy is planning to cut around 250 of the trees that pose a risk to power lines. Lauren Petracca/Staff 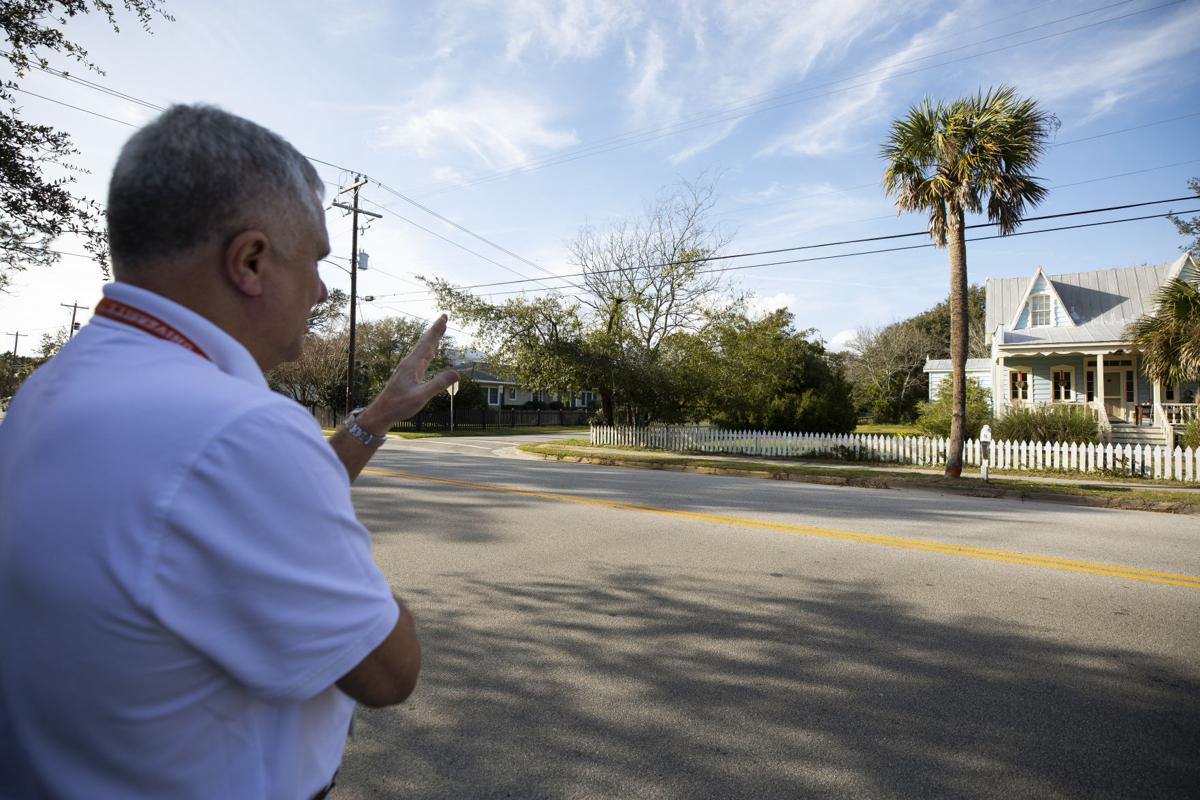 Sullivan's Island Town Administrator Andy Benke points out a palmetto tree that will be cut down by Dominion Energy, on Tuesday, Jan. 14, 2020. Lauren Petracca/Staff 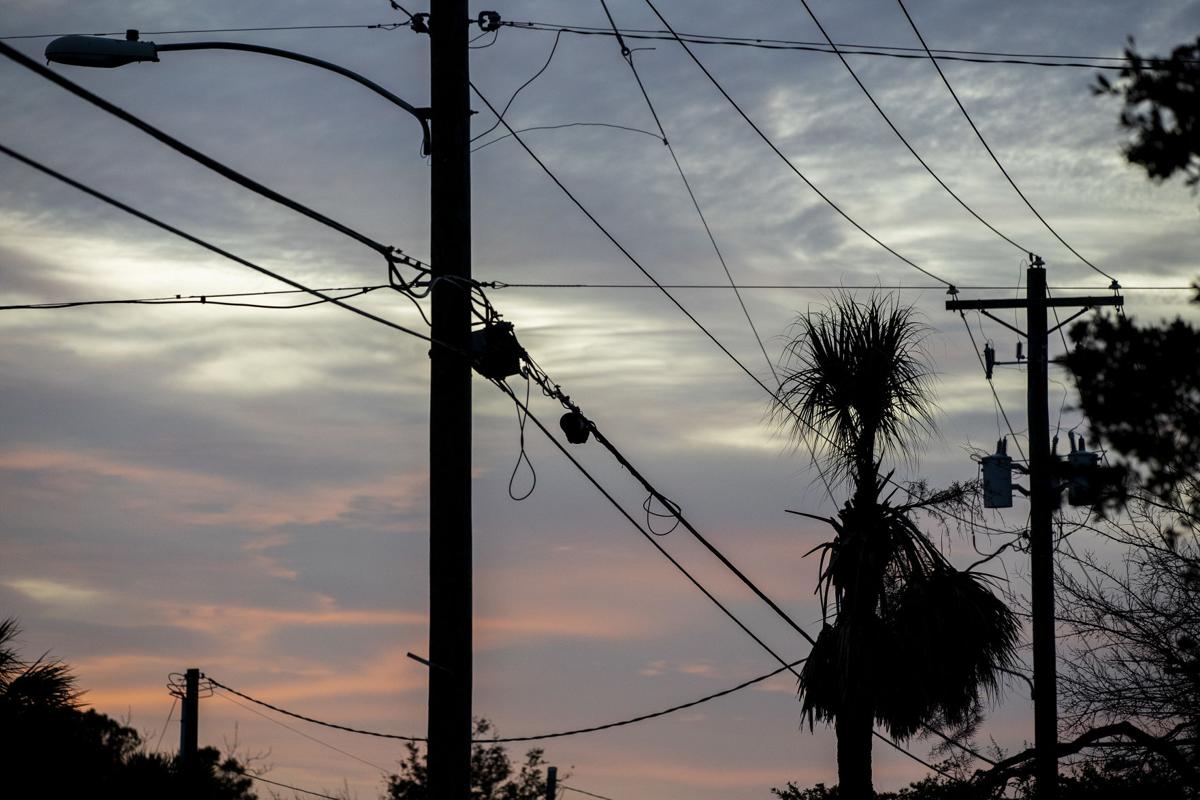 A bicyclist rides past a palmetto tree marked for removal by Dominion Energy on Wednesday, Jan. 15, 2020. Dominion is planning to cut down nearly 250 palmettos on the island. Lauren Petracca/Staff

SULLIVAN'S ISLAND — Palmetto logs famously helped Fort Moultrie absorb a pounding from British cannonballs in 1776, and many palmettos there survived Hurricane Hugo in 1989.

But the iconic trees are no match for the coming buzz of Dominion Energy's chainsaws.

The utility plans to cut down nearly 250 palmettos on the island where some residents are still smarting from the extensive tree-trimming Dominion conducted there last year.

"They've already butchered things here and in Mount Pleasant and West Ashley and James Island," said William Fuller, who has lived on the island since before Hugo.

"Dominion, 'schmominion' — I don't know what they are doing."

Utility tree-trimming is often controversial, but it's particularly fraught when palmetto trees are involved. That's because those trees can't be trimmed shorter, so it means removing them entirely.

“It’s very disturbing to a lot of residents," said Sullivan's Island Administrator Andy Benke. “I actually have three near my yard that are coming out."

“They are just such wonderful trees to have, and I’m sad to see them go," he said. "I don’t know that there’s anything the town can do."

Trees in the right of way at 122 properties will be removed by Dominion starting this month. The town posted a list of addresses and the number of trees to be removed in each location on its website sullivansisland.sc.gov.

The right of way is typically the edge of otherwise private property along roads, and often includes landscaping.

"Trees within close proximity to energized lines are both a fire hazard and an issue of public safety," Dominion spokesman Paul Fischer said. "Trees and tree limbs continue to be the No. 1 reason for power outages across our system, and the safety and reliability of our system remains our primary focus."

Island resident Dorinda Borroughs said that unlike the utility company, residents need a town permit to cut down a tree and must plant a new tree if they remove one. She doesn't have any palmettos threatened by the latest round of work but is upset about the way trees were trimmed last year by a Dominion contractor.

"I know that Dominion has a job to do and they have to have the lines clear," she said. "It just seems there could have been a more artful way to do it."

Most of the palmettos were likely planted decades ago and eventually grew to be as tall as overhead electric wires. Benke said many of the trees were planted locally, rather than being imported from Florida.

Dominion did reach out to its customers, explaining its intentions.

"While we respect and appreciate the natural beauty of the landscape surrounding communities in which we live and work, the safety, reliability and resiliency of our electric system remains our top priority," the company said in a letter to property owners.

Trees on power lines represent a significant trouble spot during the state's annual hurricane season from June to November. About 270,000 homes and businesses statewide lost power during Hurricane Dorian in 2019.

Fischer said crews are out trimming trees "practically every day" in some part of Dominion's service area in an effort to prevent future outages. The utility says trees with a maximum height above 15 feet should not be planted along rights of way near overhead lines.

Sullivan's resident Karen Biko said she understands the need to protect against power outages but said the planned removal of palmetto trees seems like overreach.

"Is it really possible that 247 palmetto trees suddenly grew into their power lines and need to be removed?" she said. "These are protected trees (by local ordinance), our state tree, and they are just going to pluck them out of the ground."

"They should be required to replant them somewhere," Biko said. "But no, they are not."

Fischer said that "it is virtually impossible to safely relocate" trees that require removal.

"We will dispose of the trees scheduled for removal," he said. "There are no plans to plant replacement trees."

Across Breach Inlet the next barrier island, Isle of Palms, expects to be next. Mayor Jimmy Carroll said he doesn't yet know how many palmetto and palm trees will be targeted for removal.

Carroll said he would like to see more power lines moved underground, to remove the need for tree-trimming and help keep the power on during storms. That's a costly endeavor, but Carroll said he thinks most residents would be willing to bear some of the cost.

More than 270,000 power outages reported across SC as Dorian travels up coast