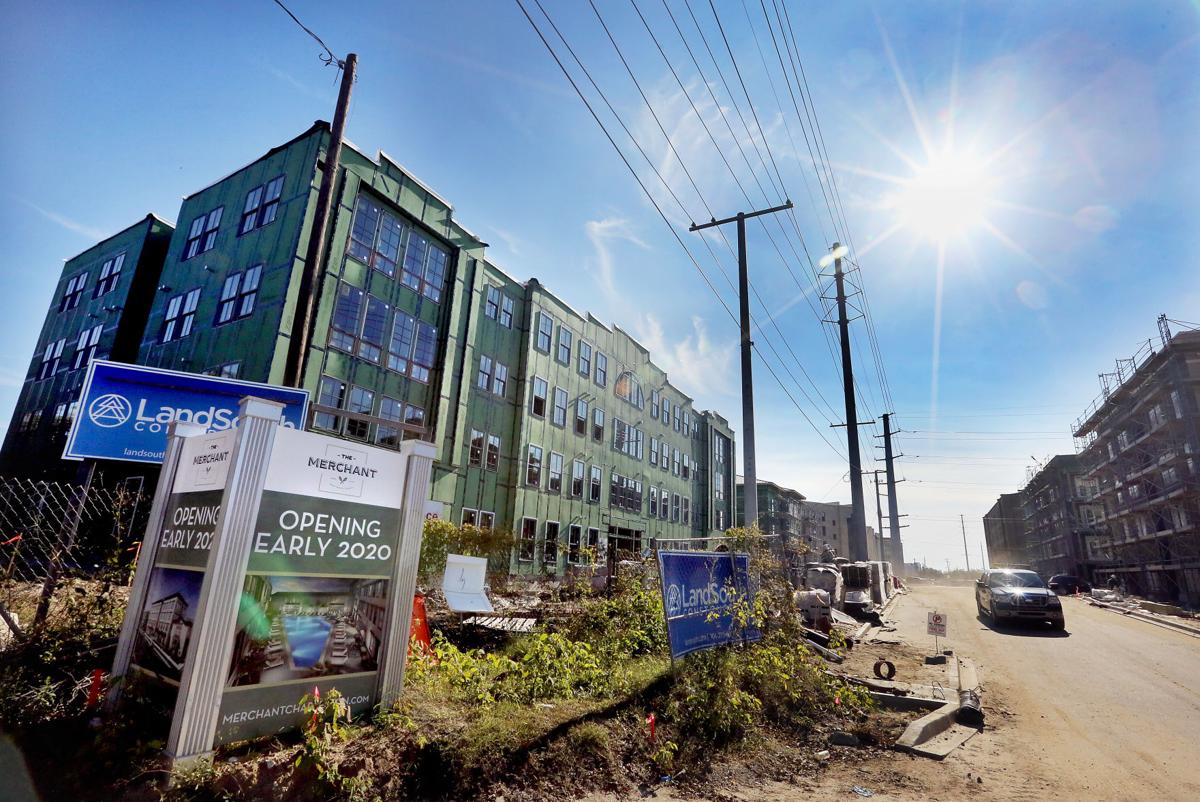 Construction continues Wednesday, Nov. 27, 2019, on The Merchant apartment complex on Brigade Street in Charleston. The Merchant is an Opportunity Zone project that could be completed in early 2020. Brad Nettles/Staff 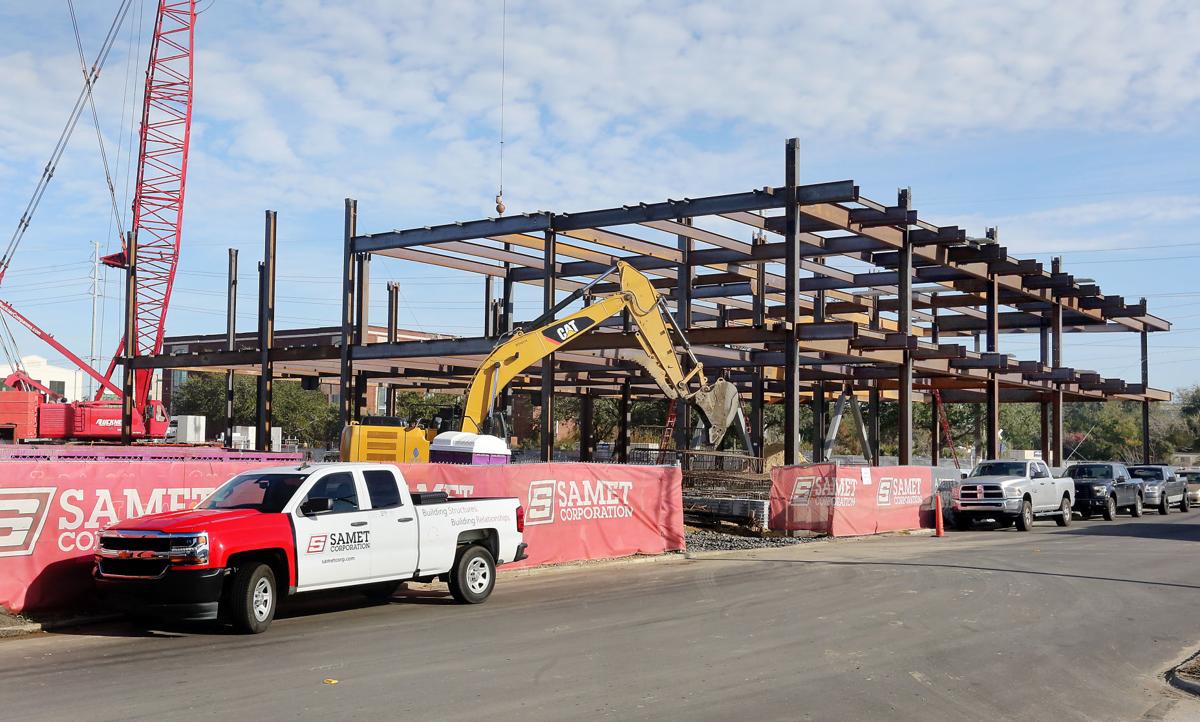 Construction continues Tuesday, November 26, 2019, on the Charleston Tech Center going up at 999 Morrison Drive. The project will benefit from federal tax incentives because the property is in an Opportunity Zone. Brad Nettles/Staff 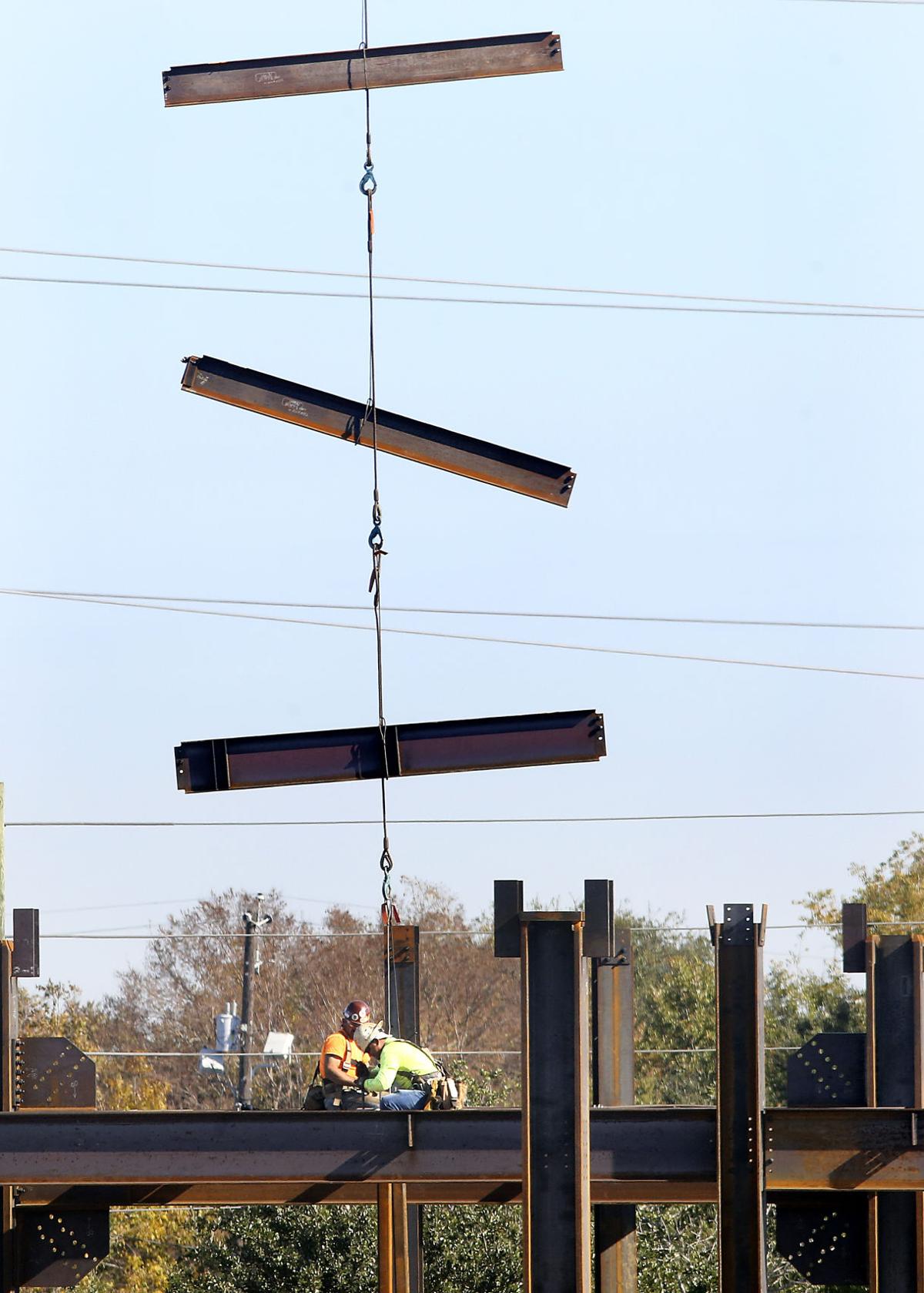 Construction on the Charleston Tech Center going up at 999 Morrison Drive continues Wednesday, November 27, 2019.The center is in an Opportunity Zone. Brad Nettles/Staff 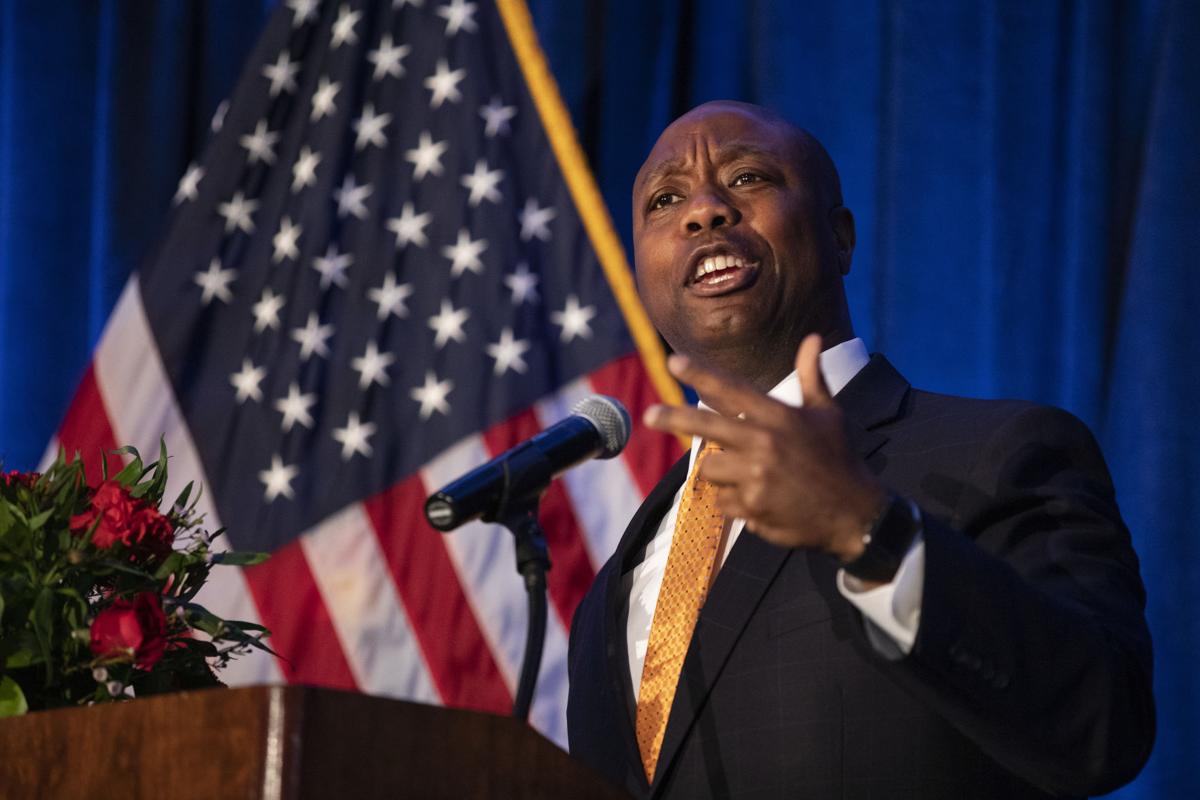 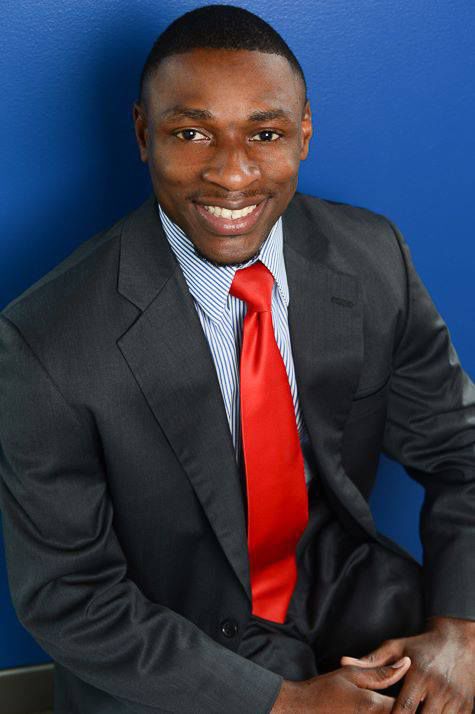 Construction continues Wednesday, Nov. 27, 2019, on The Merchant apartment complex on Brigade Street in Charleston. The Merchant is an Opportunity Zone project that could be completed in early 2020. Brad Nettles/Staff

Construction on the Charleston Tech Center going up at 999 Morrison Drive continues Wednesday, November 27, 2019.The center is in an Opportunity Zone. Brad Nettles/Staff

A movie theater at a Columbia mall and a long-planned technology center on the Charleston peninsula are among early South Carolina beneficiaries of new federal Opportunity Zone tax breaks meant to spur development in impoverished neighborhoods.

A $37 million gated luxury apartment complex on the Charleston peninsula called The Merchant, downtown redevelopment in Rock Hill, office buildings in Charleston, and redevelopment projects on the former Charleston Naval Base in North Charleston are also tapping those tax breaks.

Developers and investors can reduce taxes owed on existing capital gains — profits from selling real estate or stocks, for example — and can entirely avoid capital gains taxes on Opportunity Zone investments after 10 years.

Middle Street Partners is developing Atlantic 55, a 260-unit apartment complex in the Morrison Drive area of the Charleston Peninsula that some call NoMo. Founding Middle Street partner Adam Monroe said the Opportunity Zone incentives were "really needed to get it over the goal line."

"I do think you’re going to see a lot of development pushing into areas that need more investment," Monroe said. "It’s not going to happen right away, but in stages."

The south end of North Charleston better fits Scott's vision. That's the city where Scott grew up, and it's also a large Opportunity Zone.

There, plans to renovate the former Charleston Naval Hospital and several buildings on the former Navy Base would benefit from the tax incentive, according to William Cogswell Jr.

His company, WECCO, has plans to redevelop the Power House and storehouses 8 and 9 on the former base, and it's also negotiating with Charleston County to purchase the former hospital and the large property it sits upon at Rivers and McMillan avenues.

"What I like about (the Opportunity Zone tax incentive) is, it really does incentivize long-term investments," said Cogswell, who is also a state lawmaker. "The only flaw with it is how the maps were drawn."

Across the nation and in U.S. territories, 8,764 census tracts with above-average poverty have become Opportunity Zones. In South Carolina, 538 census tracts met the criteria, but only 135 could be chosen, because states could designate only 25 percent of qualifying areas.

The fact that much of the Charleston peninsula qualified, from Calhoun Street north, is partly because so many college students with little taxable income live there. The Charleston Tech Center, planned since Joe Riley was mayor, recently broke ground off Morrison Drive and will benefit from the tax incentives.

The downtown Charleston peninsula Opportunity Zone, which includes thriving King Street north of Calhoun Street, “stands out to me as the most obvious misalignment of that policy," said John Lettieri, a co-founder of the Economic Innovation Group, a Washington, D.C., think-tank that championed the bipartisan tax incentives approved in 2017.

“The outliers are bad, and they are obvious," he said. "It’s not just that they provide additional support to places that don’t need it. It’s also a zero-sum exercise, so another community that needed that designation didn’t get it."

Governors ultimately picked the Opportunity Zones in each state. In South Carolina, cities and towns sent their recommendations and priorities to the Governor's Office. The city of Charleston, for example, got its top choices approved as Opportunity Zones.

“Employment areas and housing in the upper Morrison (Drive) corridor are exactly what our plans call for," said Jacob Lindsey, the city's top planning official. "From the city’s standpoint, if we’re getting new employment on sites that were formerly unused industrial sites, that’s meeting our goals."

In other states, news reports have pointed out questionable tax incentive zones that appear to benefit particular developments, such as a marina for enormous yachts in Florida. In some states, developers pushed for certain areas to be designated.

Scott said no legislation is perfect, and he noted that governors decided which high-poverty areas would be chosen as Opportunity Zones. He said some parts of South Carolina, such as Rock Hill, have huge redevelopment plans in place that include affordable housing, and the tax incentive zones are spurring those projects.

The federal government isn't tracking or reporting Opportunity Zone investments and tax breaks, making it hard to tell who is benefiting.

“There are a couple dozen projects around the state that we are getting information on," said Scott.

Scott and Booker have introduced legislation that would require the Treasury Department to collect data on investments and report back to Congress.

“We aren’t even aware of what developers are or are not taking advantage of Opportunity Zones, unless they tell us or we read about it in the paper," Lindsey said.

Lettieri and other supporters of the incentives say the Opportunity Zones are helping to create jobs and housing — some of which are directly helping the low-income communities  the incentives were intended for.

“This is getting investors to look in places where they have not traditionally looked," Lettieri said. “The point here is to bend the curve, so that it’s easier and less expensive to do investment in high-need areas."

South Carolina's state and federal lawmakers are wrestling with questions about how to better focus the tax incentives on areas that need help the most.

"There really isn’t any accountability to make sure that investments reach those areas," said Pendarvis. "The goal of my legislation is to enhance the 135 Opportunity Zones that we have in South Carolina and make sure that they do what they were intended to do."

“As the law currently stands, investment is not going where it needs to go," Pendarvis said. “We can address affordable housing … and the food desert problem."

Scott opposes efforts to redirect investment by imposing federal restrictions, but he welcomes efforts to steer investment with additional state or local incentives. He often cites the struggling community where he grew up in North Charleston as an example of the places the tax incentives are meant to help.

“Opportunity Zones are my first shot at destroying the myth that opportunities are not for people like me," he said. “Anything that we can do to have the states and municipalities create more incentives to direct capital to the neediest areas is a good thing.”

The Urban Institute has urged states to take action.

"If done right, states can use the Opportunity Zone incentive to leverage small amounts of public investment and use state regulatory authority to unlock private capital for public good," a recent Urban Institute study concluded. "If done wrong, states will spend scarce resources subsidizing investments that would have occurred anyway and provide little or no community benefit — or even undermine it."

Capital gains are the profits from selling property or investments, and avoidance of capital gains tax is the incentive behind Opportunity Zones.

Here's how that works:

Qualified Opportunity Funds are created to invest in Opportunity Zone projects and tap the tax breaks.

Delayed taxation — capital gains reinvested in Opportunity Zone projects aren't taxed until the earlier of 2026 or the date when the OZ investment is sold.

Reduced taxation — capital gains reinvested in Opportunity Zones get lower tax bills when those gains are eventually taxed. That's because 10 percent of the reinvested amounts are exempt from capital gains tax after 5 years and an additional 5 percent is exempt if the OZ investment is held for 7 years.