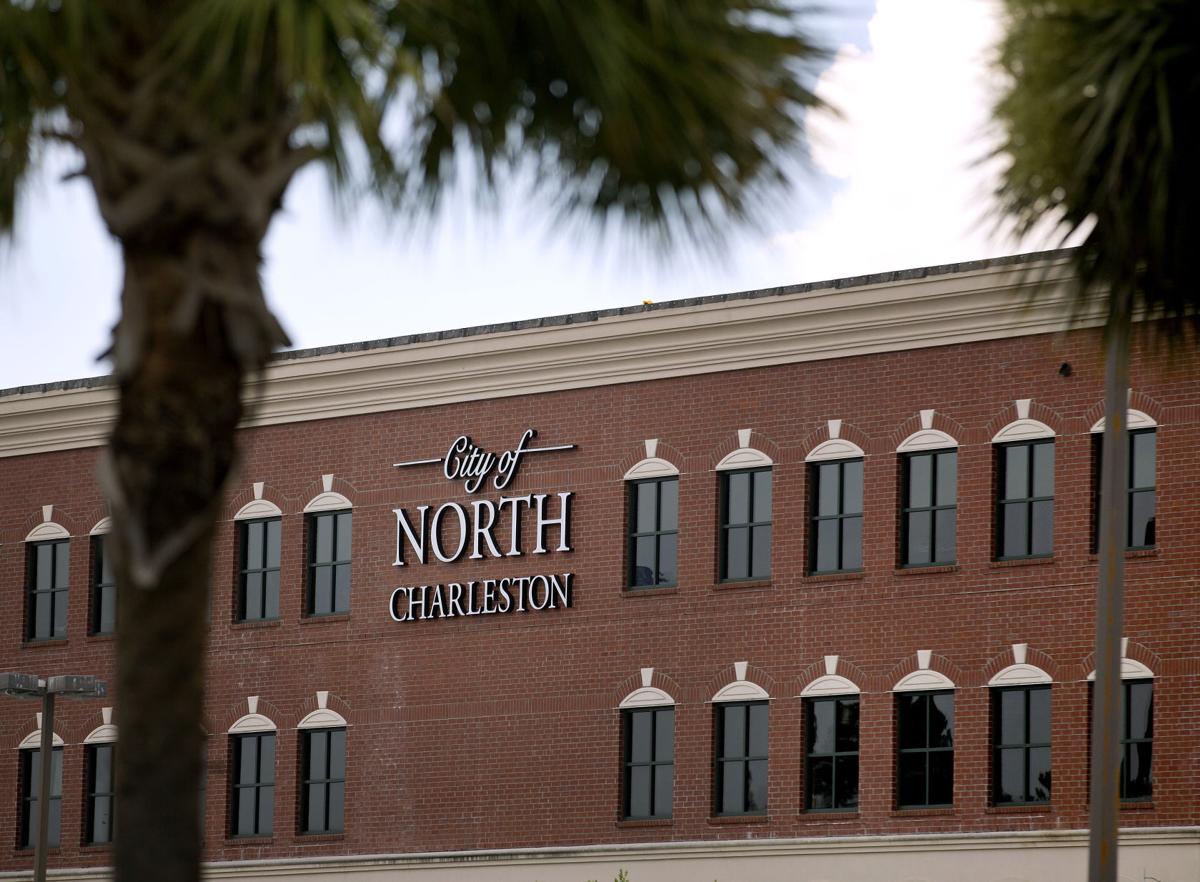 North Charleston City Hall. Approval to fill in 28.22 acres of wetlands off International Boulevard came four years after the application was submitted by property owner Uptown LLC and the city of North Charleston. File/Grace Beahm Alford/Staff 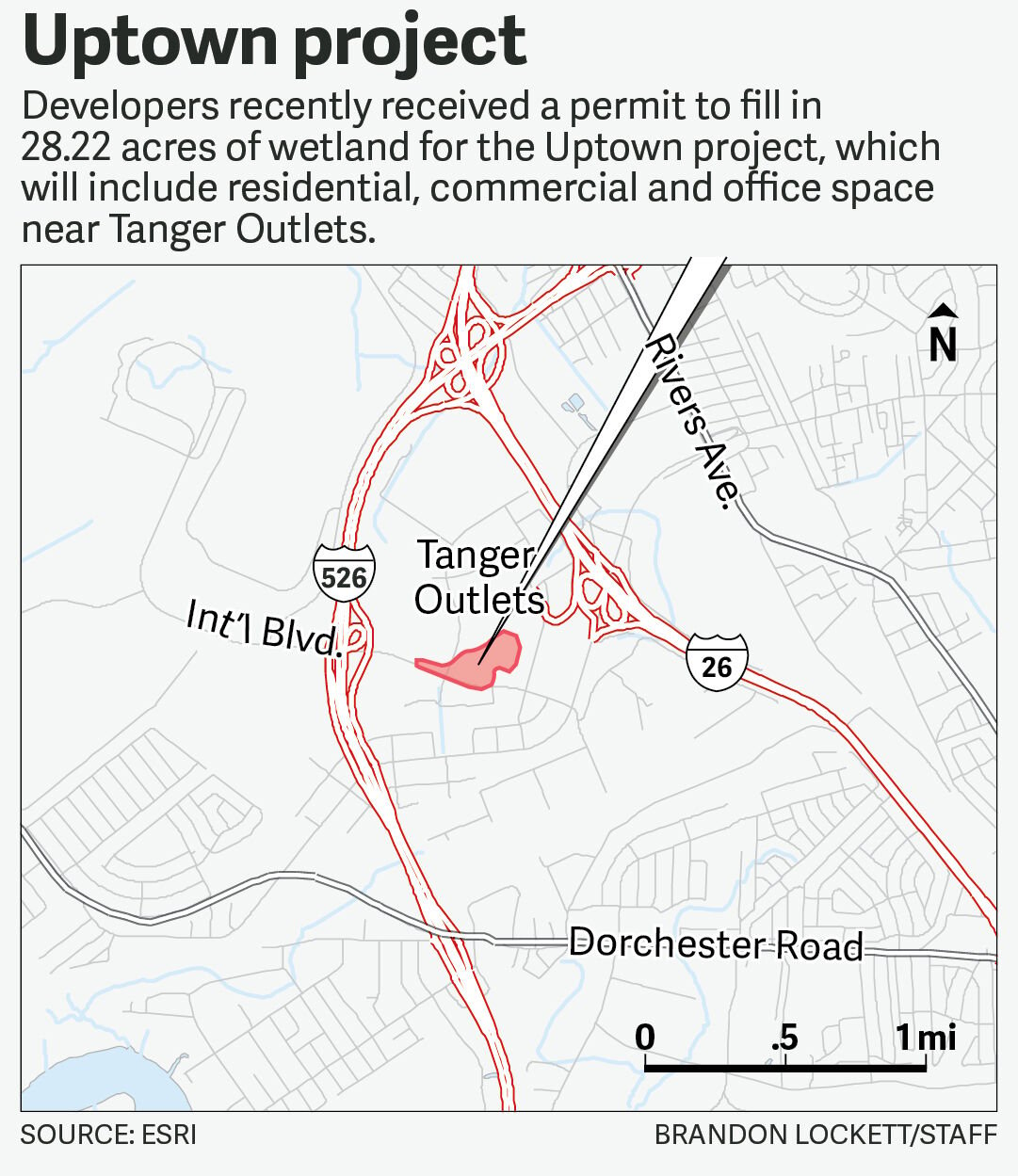 NORTH CHARLESTON — Plans to fill in roughly 30 acres of wetlands to create a multi-use development has raised environmental concerns.

The Uptown project, which calls for residential, retail and office space near Tanger Outlets, was approved last year for its wetlands permit from the Army Corps of Engineers.

Approval to fill in 28.22 acres of wetlands off International Boulevard came four years after the application was submitted by property owner Uptown LLC and the city of North Charleston.

North Charleston residents are concerned about the environmental impacts of the project. The development would be located near the headwaters of Filbin Creek, which roughly flows in the direction of Interstate 526 into the Cooper River.

The project could increase the amount of water being flushed downstream, said Jason Crowley, the communities and transportation program director with the Coastal Conservation League.

"I think there's a lot at risk," Crowley said.

The league endorsed the plan in 2016, before Crowley joined the organization.

But a lot has changed in the Lowcountry since then, Crowley said. The region has seen a number of storms and flooding events, including the state's massive 2015 flood. There has also been increased attention to the importance of drainage in recent years, he said.

There would have likely been a lot of pushback against the proposal to fill in dozens of acres of wetlands if it would have initially been proposed in 2020, he said.

The city's decision to create a special finance district to help fund the project is also something that should raise concerns among residents, Crowley said. He questioned the public benefit of using public funds toward a project that could have a negative impact on the stormwater in the surrounding communities.

“If the public is concerned about the use of their tax dollars going toward this, that’s an opportunity they have to be reaching out to their council member to raise these concerns," Crowley said.

Uptown LLC will adhere to environmental mitigations, which has included the owner acquiring 780 acres in Berkeley and Dorchester counties near the Ridgeville area to help offset the wetlands purchase.

Conservation easements will be placed on the properties to help protect them.

The permit application to the Army Corps noted the development won't have any impact on endangered species fish habits.

The city offered a response to residents' environmental concerns.

As with all projects in North Charleston, stormwater management is required prior to construction, said city spokesman Ryan Johnson.

In short, any project more than 5,000 square feet of land disturbance requires that all stormwater displaced must be accounted for within the project boundaries, leaving a net zero stormwater discharge, Johnson said.

No plans have been submitted to the city for construction for the Uptown development, Johnson said. Additionally, the city is relying upon the engineers and findings of the permit granted by the Army Corps of Engineers regulate the fill of the wetlands, Johnson said.

Neighborhoods near the creek have experienced heavy flooding in the past, particularly before a missing flap gate at Filbin was replaced between the creek and the Cooper River to help mitigate water overflow.

The 2015 flood brought 18 inches of water to the Cameron Terrace neighborhood, which includes several homes and a school near the creek, said neighborhood president Elizabeth Mason.

Mason recalls seeing neighbors wait for firefighters to help get people out of their homes because the water was so high.

Things have been better since the S.C. Department of Transportation replaced the flooding flap gate, but the intentions to fill in wetlands will absolutely increase flooding potential, Mason said.

It upsets her to know the project is being mapped out even though city officials have witnessed the impacts of Filbin Creek flooding on North Charleston communities, Mason said.

"It is discouraging to me that the city continues to pursue that type of activity," she said.

The Uptown proposition is troubling because of other developments shaping up around the creek. This includes the state's plans to widen I-526, which will also likely bring high waters, said resident and former City Council candidate William Parker, who has long worked to bring attention to environmental issues concerning the creek.

There are some who are excited about new development that could shape up.

Mayor Keith Summey said the Uptown initiative presents an opportunity for growth in nearby Liberty Hill, a historic Black community in North Charleston.

On a small scale, the city has partnered with Charity Missionary Baptist Church to create affordable housing in the neighborhood, which is just outside the more expensive Park Circle community.

Residents, like Nick Allison, want to see more local businesses in the area.

Allison, who moved to Liberty Hill almost two years ago, said residential units at around $1,000 a month would be a much-needed asset to the community.