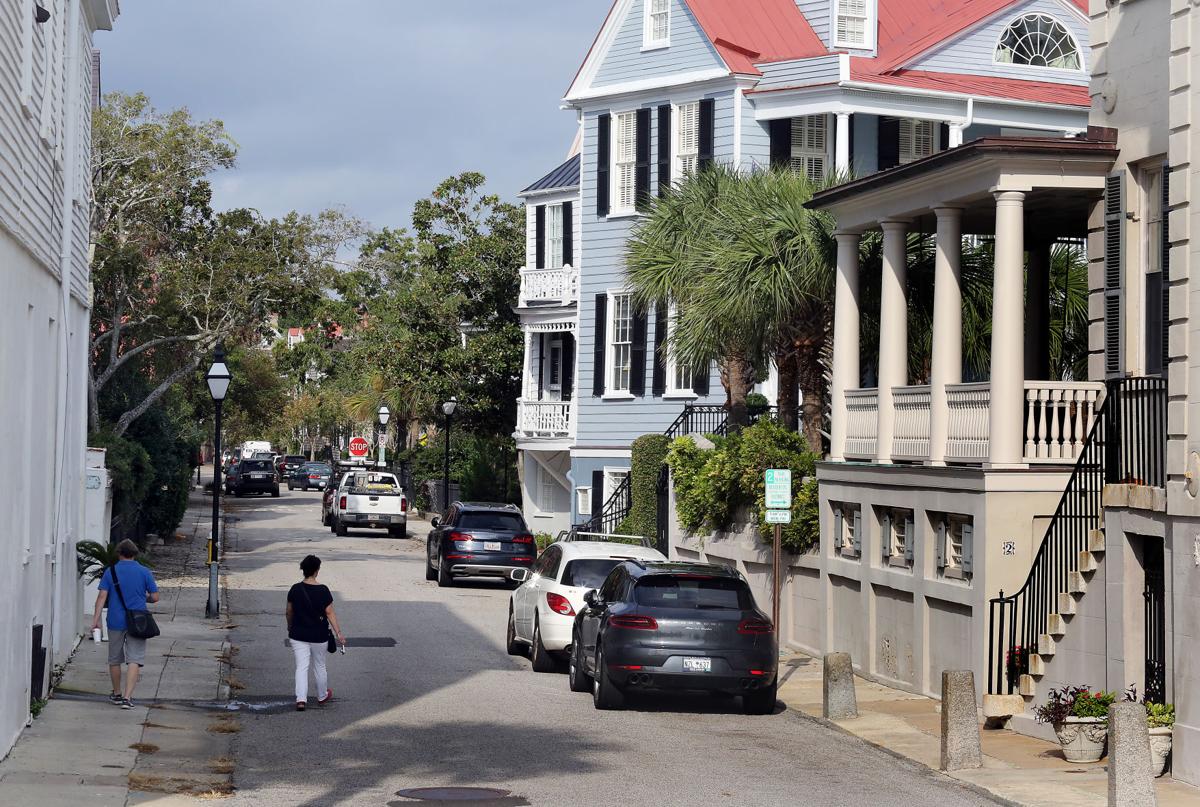 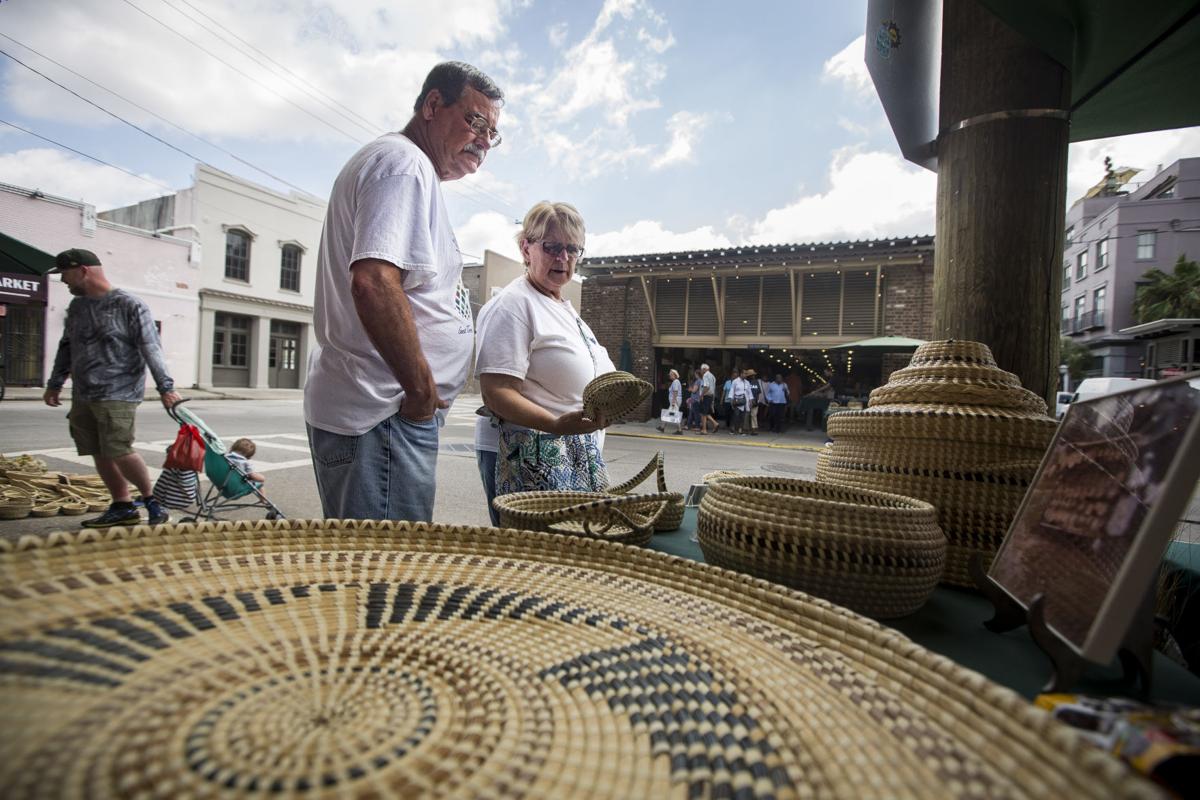 Steve and Bobbie Smith of Myrtle Beach look at sweetgrass baskets on June 20, 2019, in Charleston. File/Staff

Charleston is just one year shy of a decade-long sweep.

For the ninth year in a row, the city has been named a No. 1 destination by readers of Condé Nast Traveler. This year, Charleston also received the highest score of any destination, earning it the distinction of the top city in the world.

After a $200 million renovation and expansion, Conde Nast Traveler enthusiasts placed Charleston International Airport at No. 7 among all terminals in America.

The Holy City has also secured multiple No. 1 rankings at Travel + Leisure, Southern Living and Afar magazines. The Conde Nast reader survey is the longest-running in the travel industry, and it's also the publication where Charleston has its lengthiest streak.

The city's success with Travel + Leisure readers isn't far behind at seven years with Charleston in the top spot.

Conde Nast Editor-in-Chief Melinda Stevens said Charleston has "a bit of a glow around it" in the travel world, and particularly in the U.K., with a reputation for holding true to itself.

"No one seems to have just one layer in Charleston," said Stevens, who has spent time exploring the city. "People have their fingers in many different pies, as we say, and it gives a richness to it. There's a sophisticated ease."

Summer officially came to a close last week with the first day of fall. Americans are starting to enjoy the season’s most beloved activities l…

In August 2018, Stevens became the magazine's global editor when the publication combined its editorial teams for the U.S. and U.K. editions.

Top Cities Outside the U.K.

British travelers have long been the Holy City's top demographic among visitors from overseas, but the relationship was heightened in the last year with the launch of nonstop British Airways service from Charleston to London's Heathrow Airport.

The inaugural flight took off in April, and the airline's initial commitment ends Oct. 24. But British Airways announced last week that the service would return again in the spring.

This year, responses from readers of both the U.S. and the U.K. editions were merged into one compilation of preferred destinations, lodgings and other travel features, giving Charleston the new distinction of earning the top spot among global destinations not in the United Kingdom.

Though that honor, and the distinction of being named the best small city in the U.S., was released Monday morning, Charleston tourism leaders were surprised to also receive an award for being the top city in the world at an official ceremony that evening.

Charleston had the highest cumulative score of any city featured, earning 94.73 on a 100-point scale. Merida, the capital of the Mexican state of Yucatán, had the next highest score at 94.54.

Charleston has been appearing in Condé Nast Traveler's top 20 U.S. destinations since the early 1990s and has been climbing since then.

When Charleston took the top slot from the Golden City for the first time in 2011, comedian Stephen Colbert gave the acceptance speech at a banquet in New York. The Charleston native and now CBS "Late Show with Stephen Colbert" host spoke about the 4 million visitors who came to the area — a number that has since swelled to more than 7 million — and additional travelers the new ranking was likely to attract.

That growth in visitation has prompted concern from locals as the city continues to stay in the spotlight each year. The idea of "overtourism," or the strain that a high concentration of visitors in one destination can have on the community, has come to the forefront as the number of total travelers worldwide has swelled.

"I think this will become more and more pertinent. We need to be mindful that cities are not victims of their own success," said Stevens. "I think it's the responsibility of the tourists, too, to be respectful and contribute to the local economy in a meaningful way."

In Charleston, as visitor numbers have grown, so has the economic contribution from the industry. It's estimated that tourism pumped more than $8 billion into the region's economy last year.

Explore Charleston CEO Helen Hill credits hotel development downtown with getting the city into Condé Nast's top 10 —  a range of options that includes boutique and luxury properties is necessary to gain acclaim from "discerning travelers," she said — but attributes the nine-year streak to the city's scores for friendliness and service.

Has tourism in Charleston reached a tipping point? Local experts weigh in.

It's no accident, either, that those scores usually make the difference for Charleston every year. Right around the same time the city started popping up on travel publications' lists, Explore Charleston was starting to train the city's hospitality staff.

The practice, which consolidates training for hospitality staff and allows opportunities for workers to see some of the attractions tourists will likely be asking them about for free, is more common across visitors' bureaus now but was rare at the time.

Condé Nast's rankings are based off each destination's cumulative score, which is calculated from hundreds of thousands of online survey responses. The top rankings are often separated by just tenths of a point. Hill said the scores will often reflect major events or openings that year.

When Sean Brock, the founding chef of the Husk restaurants, first won a James Beard Award, for example, the city's point total for food and dining got a boost.

Top Small Cities in the U.S.

The West and the Southeast dominated readers' rankings of the best small cities in the U.S. for 2019. South Carolina took two slots with Greenville in the Upstate at No. 9. Nearby Savannah came in fourth, just behind Alexandria, Va.

Chicago, Minneapolis and Boston rounded out the top three, in order, for large U.S. cities. None of the chosen large U.S. cities list made the cut for the top 20 cities outside of the U.K., but two small cities in addition to Charleston — Santa Fe and Alexandria, ranked second and third, respectively, on the U.S. list — cracked that list's top 10.

This year's awards also included a ranking of the top 10 hotels in Charleston. The French Quarter Inn led the list, followed by the HarbourView Inn, then Belmond Charleston Place.

Charleston International made the magazine's list of the best airports in the U.S., coming in at No. 7.