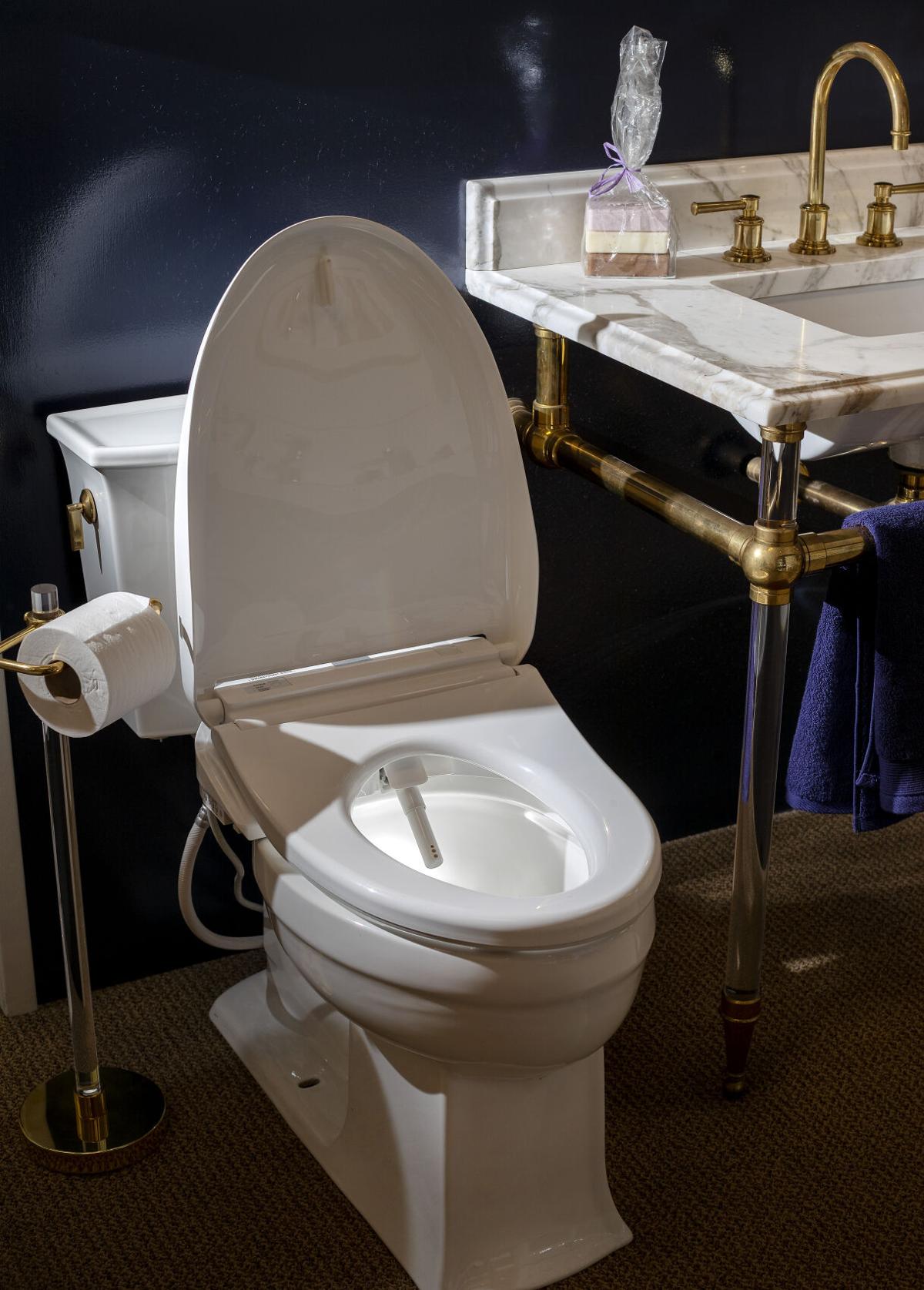 A toilet seat with a built-in bidet device at Moluf’s Supply, Tuesday, Dec. 1, 2020 in Charleston. Interest in bidet devices soared this year, coinciding with toilet paper shortages. They provide clean rinsing water from a wand-like sprayer that extends from the underside of a toilet seat. Grace Beahm Alford/Staff 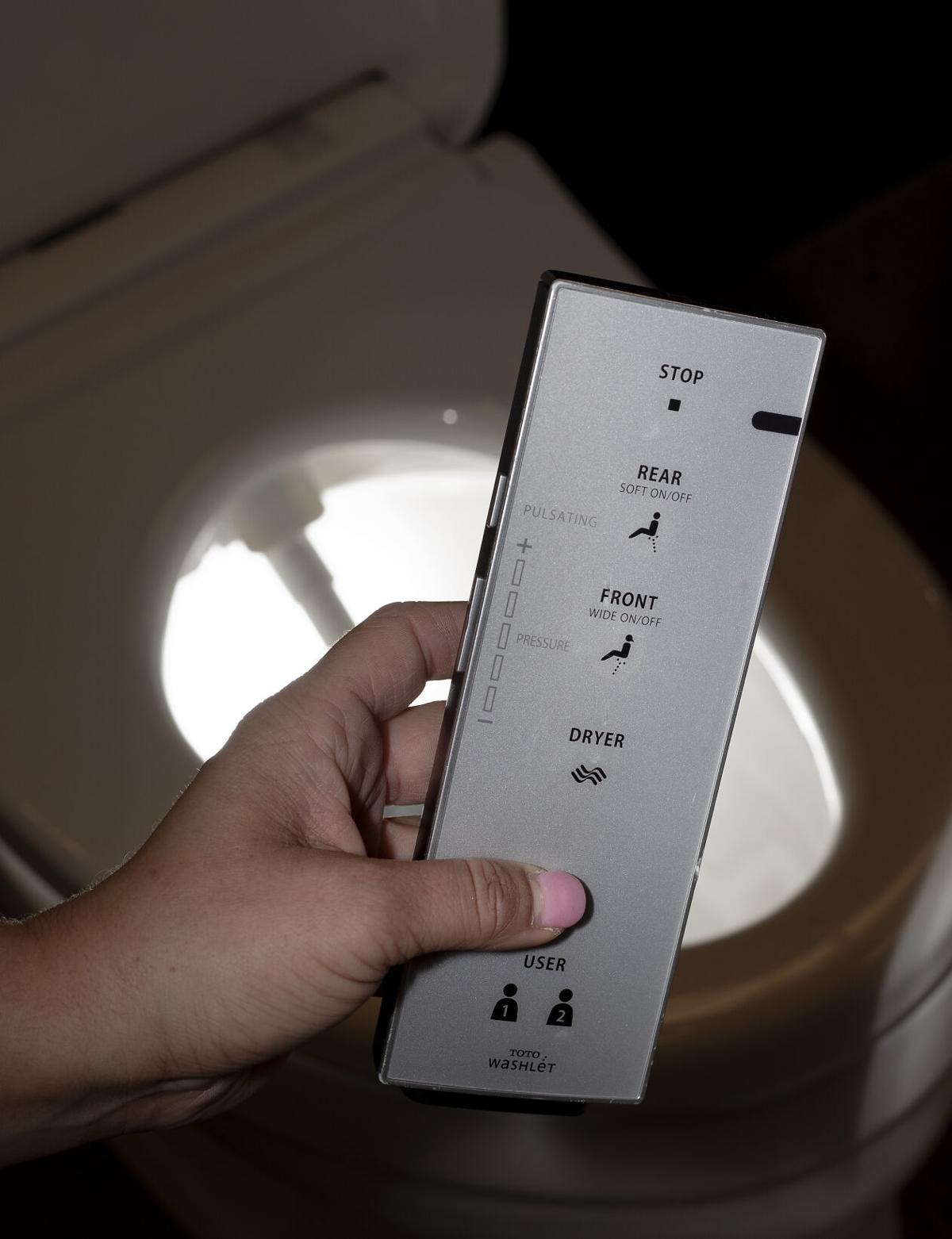 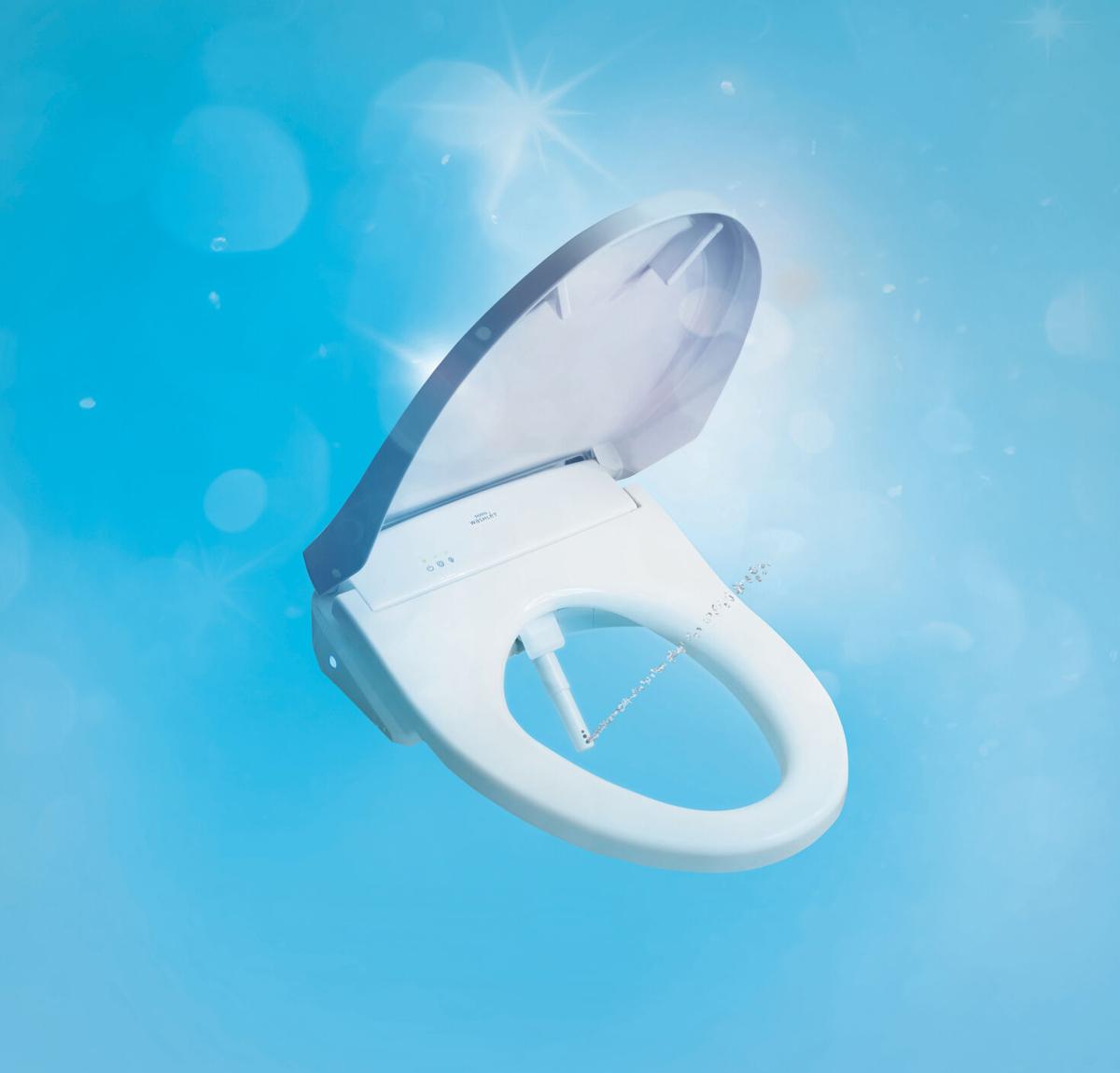 A Toto Washlet S550e, a toilet seat with built-in bidet, costs about $1,100. The more affordable 100 and 200 series are well-rated and cost much less. Provided 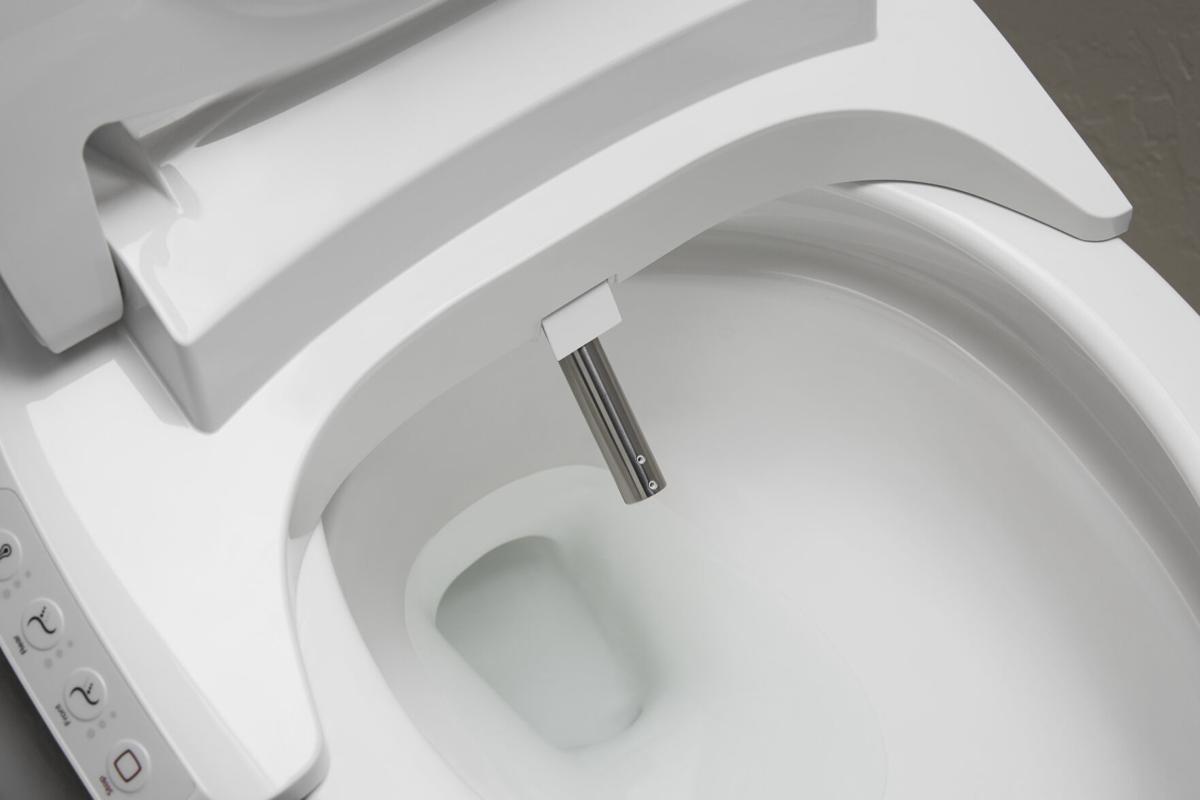 Bidet toilet seats typically have nozzles that project from the underside of the back of the seat when activated, such as on this Kohler model. Provided 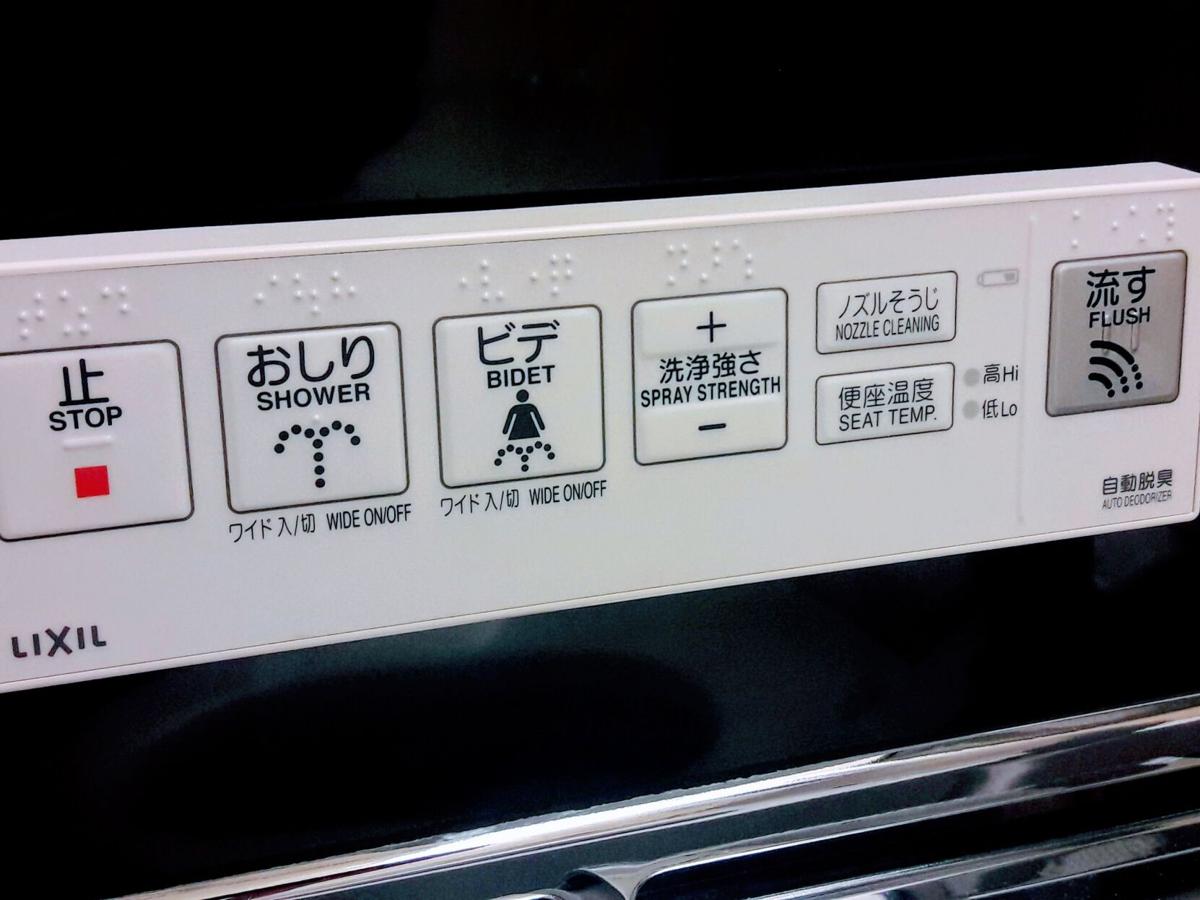 The control panel for a bidet toilet at a hotel in Japan in 2019. David Slade/Staff 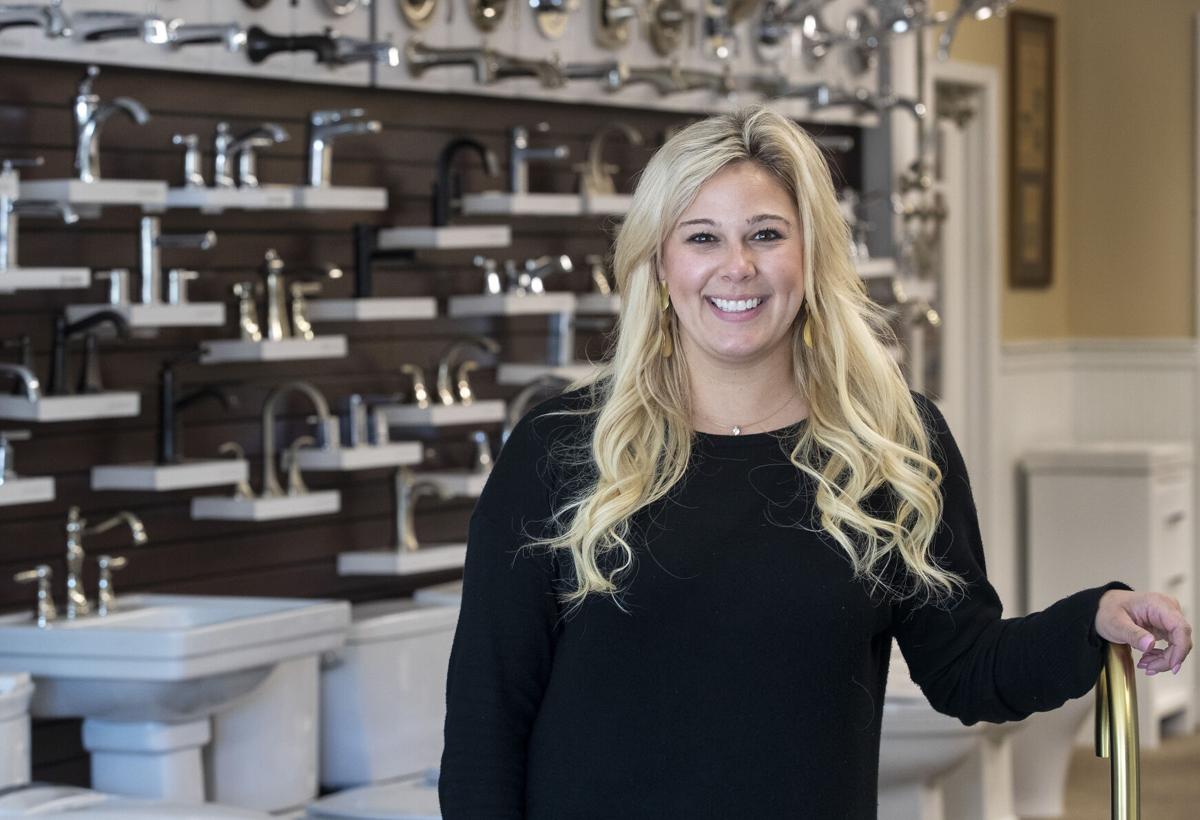 What many people want as a holiday gift or a home improvement this year is a bidet, which appears to be no coincidence in a year when toilet paper shortages have been an issue.

“We saw just explosive growth occur during what we call the toilet paper panic of March 2020," said Bill Strang, president of corporate strategy, e-commerce and customer experience for Georgia-based Toto USA. "We sold out in two and a half weeks — tens of thousands of products, just gone."

And the word "bidet" became the 20th most-searched term on Amazon at that time, he said.

A bidet sprays clean water on one's privates. They can be standalone fixtures or — much more commonly now — built into toilets or toilet seats. A 2019 USA Today story described the latter as "butt-spritzing toilet gizmos."

Snickering seems unavoidable, because a discussion of bidets could include many staples of middle-school humor: toilets, butts, poop and genitals.

“It’s like a shower … for your butt,” says manufacturer Tushy.

The Post and Courier contacted several people who have privately expressed admiration for their recently-purchased bidet devices. None agreed to be interviewed for this article.

“I always hear that once you use one, you have to have one," said Sarah Moluf, showroom consultant at Moluf's Supply in Charleston. “Especially now, with the holidays, I’ve been selling lots of them."

"In Japan they are in every bathroom," said Moluf. "We actually have them in the restrooms here."

Modern bidets often take the form of a toilet seat with a built-in bidet device which provides clean rinsing water from a wandlike sprayer that extends from the underside of the toilet seat.

The toilet seat bidet is actually an American invention, pioneered by Arnold Cohen in the 1960s. It was slow to catch on in the U.S. and he sold the invention to Toto, which went on to sell more than 50 million Washlet toilet seat bidets since 1980.

“A bidet was always considered a French or Italian porcelain thing," said Strang. "To be able to take that functionality and put it in a toilet seat changed everything."

There's a dizzying array of options for the bidet-curious. They range from under-$50 attachments that use tap-temperature water to all-in-one toilets that seem to do everything but your laundry and cost thousands of dollars.

For buyers of toilet add-ons, key questions include whether to get one that is integrated into a toilet seat, or one that attaches to the existing seat or toilet, and whether warmed water is a must-have. All bidets use fresh water (an odd point, but one that many manufacturers feel the need to mention), and self-cleaning nozzles are standard features.

Here's a general overview of what to expect at different price points:

From the least to the most expensive, these devices are the latest developments in ways to meet a basic human need, and they've come a long way. The first indoor toilets were basically buckets, and the first bidets were bowls of water.

In 2014 The Post and Courier published an Associated Press story about bidets that said, among other things: “A new generation of toilets may one day make toilet paper, and the need to put one’s hands anywhere near the unspeakable, seem like chamber pots and outhouses: outdated and somewhat messy throwbacks reserved for camping trips.”

Wiped out of toilet paper? Here's why

Apparently the year of toilet paper shortages and hoarding gave that trend a big boost.

“Folks began to buy them, then they started talking about them on social media," said Strang.

The flush toilet was invented 424 years ago, though they weren't in widespread use until the 1850s according to Smithsonian Magazine. Bidets with pumped water date to 18th-century France according to manufacturer Brondell.

"This invention meant that bidet enthusiasts could simply spray a fountain of water onto their behinds," Brondell's website explains. "They no longer needed to scoop up water with their hands to wash."

The invention of modern bidets built into toilets or toilet seats allowed for widespread use that didn't require extra bathroom space or hot-water plumbing.