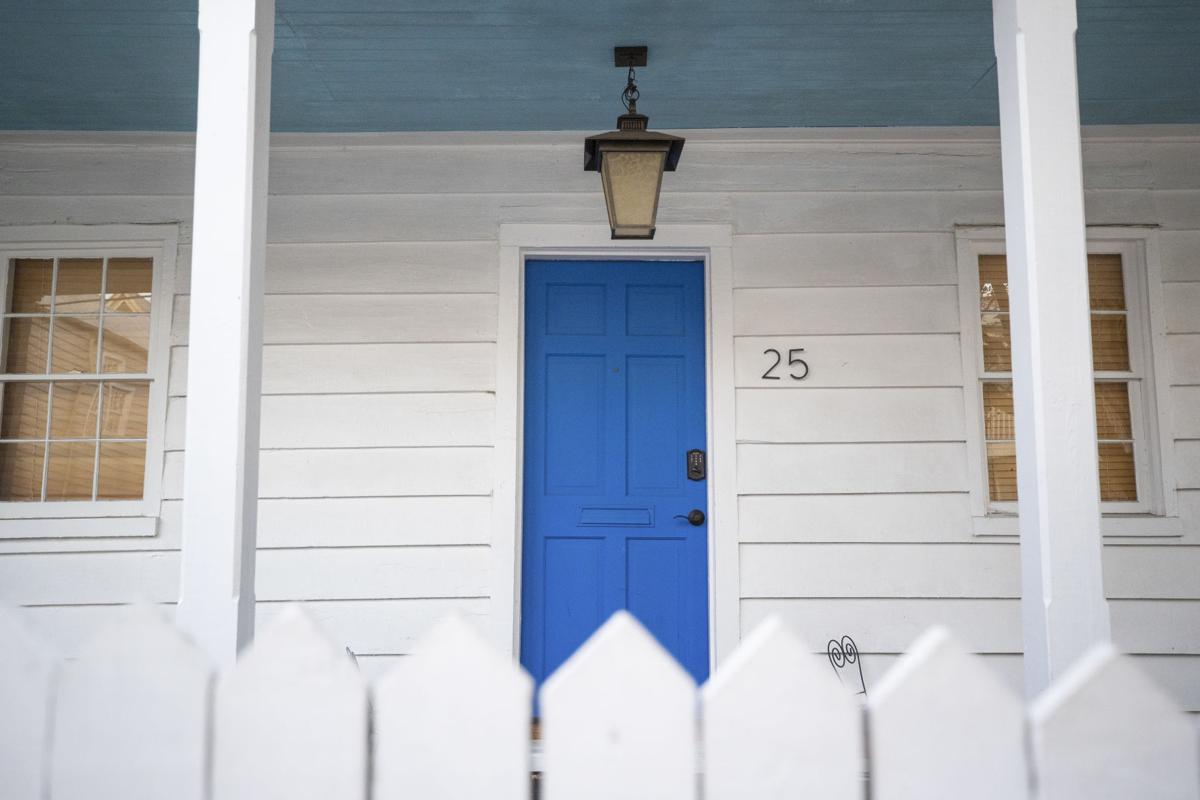 A house on Sires Street features a blue door with a haint blue porch ceiling on Nov. 19, 2019. Lauren Petracca/Staff 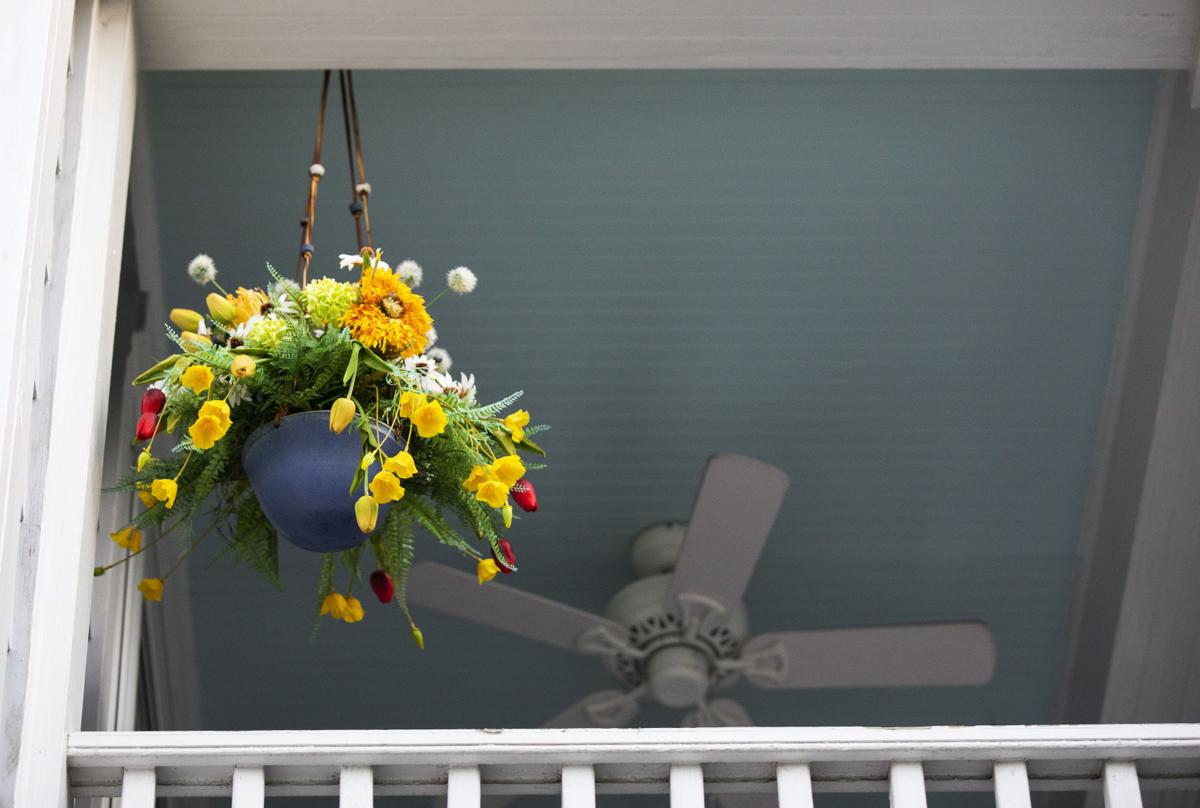 A flower arrangement hangs below a haint blue painted ceiling in Charleston on Nov. 19, 2019. Lauren Petracca/Staff 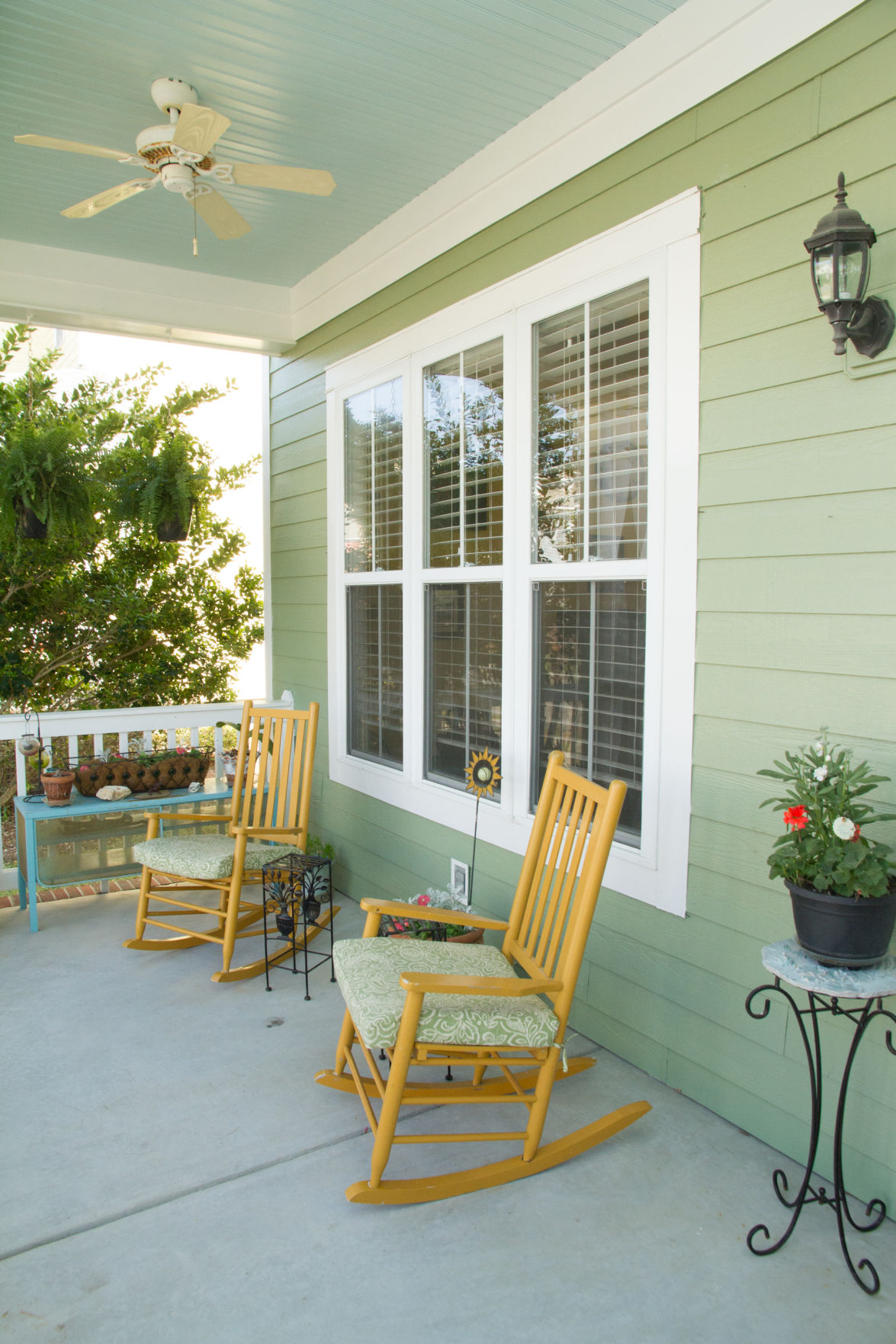 Rocking chairs mark the front porch of this home on Foxglove Avenue in the Knightsville area near Summerville. File/Marie Rodriguez/Special to The Post and Courier 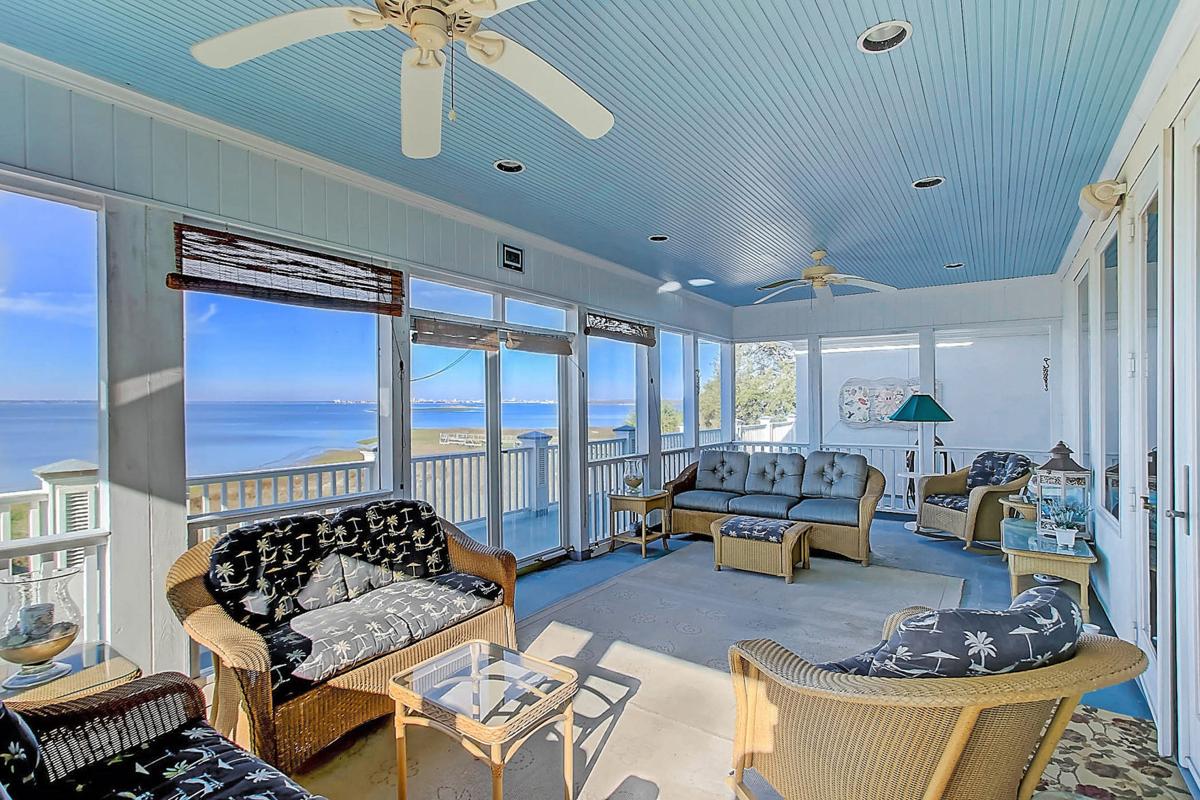 The panoramic sights at 5 Pierates Cruz in Mount Pleasant are visible from the wide screened-in back porch. File/Provided

A house on Sires Street features a blue door with a haint blue porch ceiling on Nov. 19, 2019. Lauren Petracca/Staff

A flower arrangement hangs below a haint blue painted ceiling in Charleston on Nov. 19, 2019. Lauren Petracca/Staff

Rocking chairs mark the front porch of this home on Foxglove Avenue in the Knightsville area near Summerville. File/Marie Rodriguez/Special to The Post and Courier

The panoramic sights at 5 Pierates Cruz in Mount Pleasant are visible from the wide screened-in back porch. File/Provided

Tour guide Alphonso Brown knows one of Charleston's most common design trends well, because he grew up with it in his childhood home in Rantowles.

"We painted the (porch) ceiling blue and the trim around the windows blue, because that wards off evil spirits," Brown said.

The protective nature ascribed to the color blue is an important part of West African and Gullah cultures. And it's evident all around Charleston. Look up on any street in the city's historic district, and it's likely a light-blue porch ceiling is nearby.

There are a few theories as to why the coverings to so many porches — more commonly known as "piazzas" in Charleston — sport a turquoise or robin's-egg hue. Some say the color wards off nesting insects, or simply imitates a slice of clear sky overhead.

But by far the most common explanation is that it's "haint blue," a custom derived from Gullah culture, which was used to keep malevolent spirits away. There's not one specific shade of the color, because any light blue on a porch overhang qualifies.

The concept has become popular among Charleston tour guides, sticking in the minds of the city's visitors. But puzzling out its full history can prove challenging.

"Of all of the history questions that we field at (Historic Charleston Foundation), I'd say haint blue is a large portion," said Lauren Northrup of HCF.

While an internet search today shows many hues that could be used as "haint blue," there's little easily accessible information tracking the color's history. Those that do are sometimes written by paint companies.

The color isn't directly mentioned in Charleston's official handbook for tour guides, said Leigh Handel, who recently helped overhaul the tome. There is, however, a chapter that details malevolent spirits in Gullah culture.

Christina Butler, an architectural historian and professor at the American College of the Building Arts, is often looking for older documents to track design trends and traditions. The earliest mention she's found in a newspaper describing blue porch ceilings as "haint blue" dates to just 1985.

Butler wondered if, like many design trends described to tourists, the concept was embellished as the city pushed to market itself as a destination in the middle of the last century.

Northrop added that if slaves and Gullah descendants really used indigo for early shades of haint blue, as is often said, the colors would have faded quickly. Natural dyes like indigo are not colorfast in exterior house paints, and would have been even lighter in the lye-based washes used in early Charleston.

"The 20th-century sort of romanticization of Charleston traditions, I think, created the perfect environment for haint blue to really become larger than life," Northrup said.

But it's no surprise that mainstream press was slow to catch on to the concept, said Damon Fordham, a professor at The Citadel who's studied Gullah folklore.

The Gullah culture developed on the Sea Islands of the Southeast, as African slaves working in remote areas formed a common culture and language, which mixes European and African influences with English.

For a long time, Gullah culture was looked down upon, especially for blacks trying to climb in social class, Fordham said. Between the generations, some traditions were lost or became fuzzy, and it's unlikely that the media of decades past would take cultural traditions seriously.

He recalled some mentions of haint blue in oral histories conducted with Gullah people in the 1930s and '40s, however.

"You’re just not going to find this type of stuff in newspapers, at least not where it was taken seriously," Fordham said.

But in families like Brown's, the traditions endure, describing not just the protection afforded by the blue, but the spirits that might arrive without it.

Among those spirits are hags, fearsome creatures that walk among people but also shed their skin to become invisible, and smother unaware sleepers in their beds.

"People don't believe, they don’t get into it," Brown said. "Meanwhile, the hag is having a field day on people."

A local organization supporting a 15th century art form was established in 2015 to bring more awareness to an old and often overlooked medium.