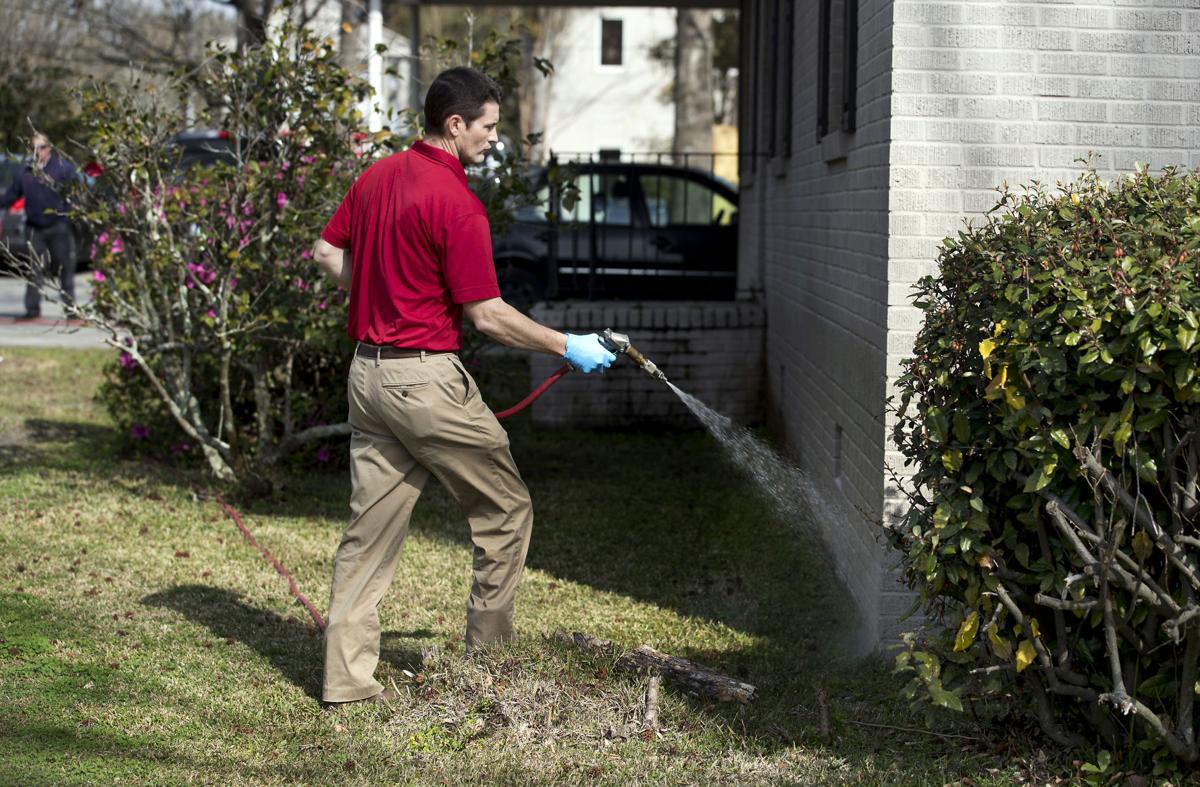 "All the bugs come from the outside in, so we try to create a barrier that they have to cross" said Nick Cummings with Palmetto Exterminators, who treated a house Wednesday, Feb. 12, 2020. in West Ashley. Grace Beahm Alford/Staff 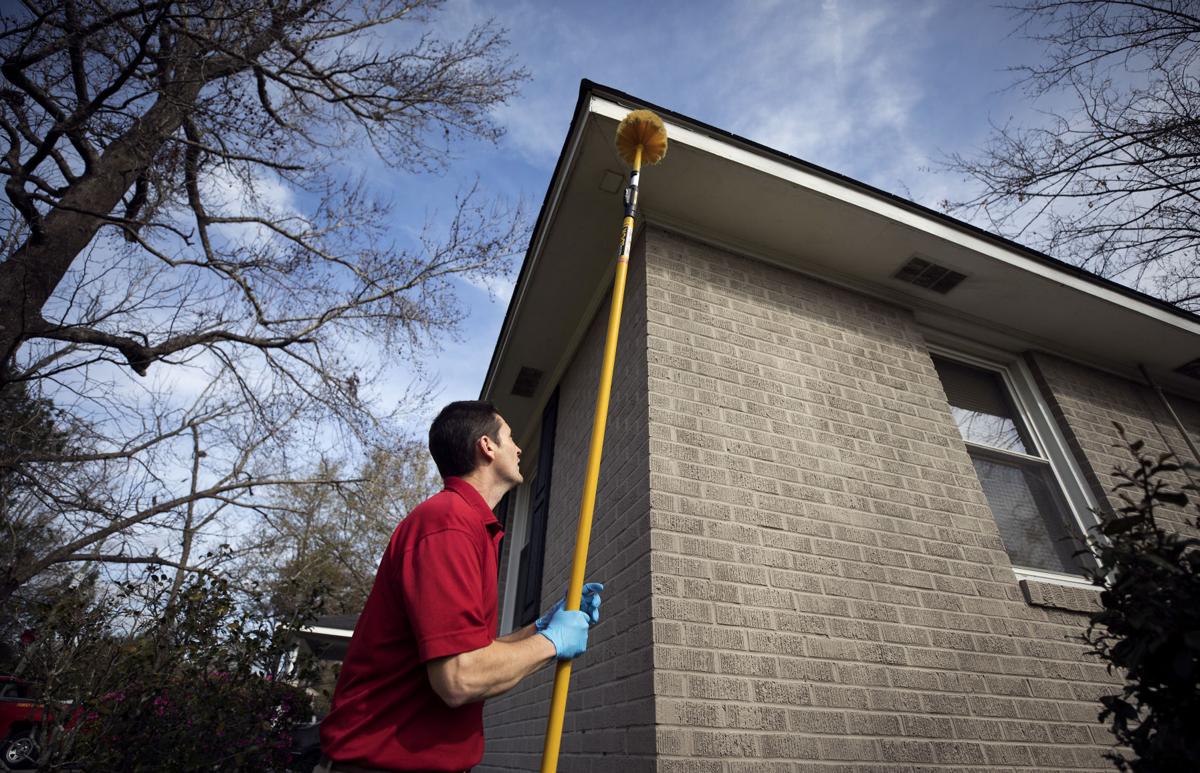 Nick Cummings with Palmetto Exterminators uses a long brush to clear out cobwebs from the windows and eaves of a home Wednesday, Feb. 12, 2020, in West Ashley. Grace Beahm Alford/Staff

The winter months aren't typically a time when pest control is at the forefront of people's minds in the Charleston area.

Local exterminators have found that homeowners usually reach out to them when they notice problems like recurring rodents in their home or obvious damage. But rodents aren't the only thing they should be thinking about this season.

Spring and summer months serve as the introduction of pests such as termites, earwigs, palmetto bugs and mosquitoes. And there are simple things experts believe homeowners can do to make their jobs easier and sometimes unnecessary.

They also believe that this is one of the best times to prepare for those challenging pests that arrive during warmer months.

“A lot of people don’t think you need to do pest control in the winter," said Bert Snyder, an entomologist and owner of Palmetto Exterminators. “That couldn’t be further from the truth.”

One of the easiest things homeowners can monitor is the area surrounding the outside of the home. Exterminators say that a common and easily avoidable mistake homeowners make is overlooking items such as hedges, bushes and tree limbs in relation to pest control this time of the year.

Charleston ranks 14th in US in home price appreciation

Something as simple as a bush or a tree branch gently touching the outside of a house can be the difference between whether certain pests invade a person's home. Snyder said that pests like palmetto bugs, spiders and even rodents can use a tree or bush limb as a bridge to a home or attic.

The same goes for chopped wood outside the house.

“Make sure there is nothing against the foundation around the house," said Karl Kuester, owner of Anchor Pest Management.

Drew Leilich, owner of Carolina Exterminating, said some pests also get in through mulch. He said some homeowners have a habit of tossing out piles of new mulch without getting rid of the old mulch.

For pests such as earwigs, that old mulch is usually an ideal location for them to lay their eggs in the winter, Leilich said. So when someone places additional mulch on top of that area, they are making things worse with those pests.

"They start coming out when the spring hits," Leilich said.

Homeowners should also routinely clean out their gutters at this time. Those spaces, if not maintained, are ideal for pests such as termites and mosquitoes.

"That is where a lot of them are going to habitat. ... One of the biggest pests we have is the mosquito," Leilich said.

Kuester has found that bird feeders are often an unnoticed source of pest problems in the winter, especially if they sit too close to the home. They can attract rodents that will try to shake out the food, he said.

“Keep it farther away on the tree somewhere," he said. “I have two customers that had that problem now.”

He said one of those customers told him she noticed that rodents were climbing on the railing to reach their bird feeder. They eventually made their way into her house.

Residents also should monitor outdoor objects that hold and retain water. Those items can attract additional pests. Kuester said small toys outside should be turned over so they don't collect water.

Residents who have birdbaths are advised to clean them routinely because insects, including mosquitoes, like to lay their eggs in them. This is especially important if the birdbath doesn't have a stream or fountain feature.

Some specialists have found that insects don't like to lay eggs in spaces with running water.

Exterminators advise residents to routinely inspect their homes for issues such as damaged wood or leaks. Right now is one of the best times to do that since heavy termite and mosquito invasions haven't yet appeared, experts say.

Homeowners should inspect and poke old wood in and around the house to check for wood rot. They should also open and close windows to see if everything is in order.

"There are windows around people's houses that haven’t been open in years," Snyder said. “You've got to walk around and inspect your house.”

Editorial: Charleston seeing the light on solar panels in the historic district

If a window is constantly fogging up and is wet, that could be a sign that the window isn't sealed properly. Kuester said this could lead to moisture intrusion and attract termites.

"They search for moisture," Leilich said.

Experts believe it is in a homeowner's best interest to inspect and monitor their homes this time of year. A small wood repair could make the difference between a couple hundred dollars in repairs and thousands in termite damage.

And if homeowners don't want to do the job themselves, some local exterminators offer a free inspection.

“By doing a preventive measure you can avoid most of the problems," Kuester said, adding most people don’t really want to have a bug in their house.