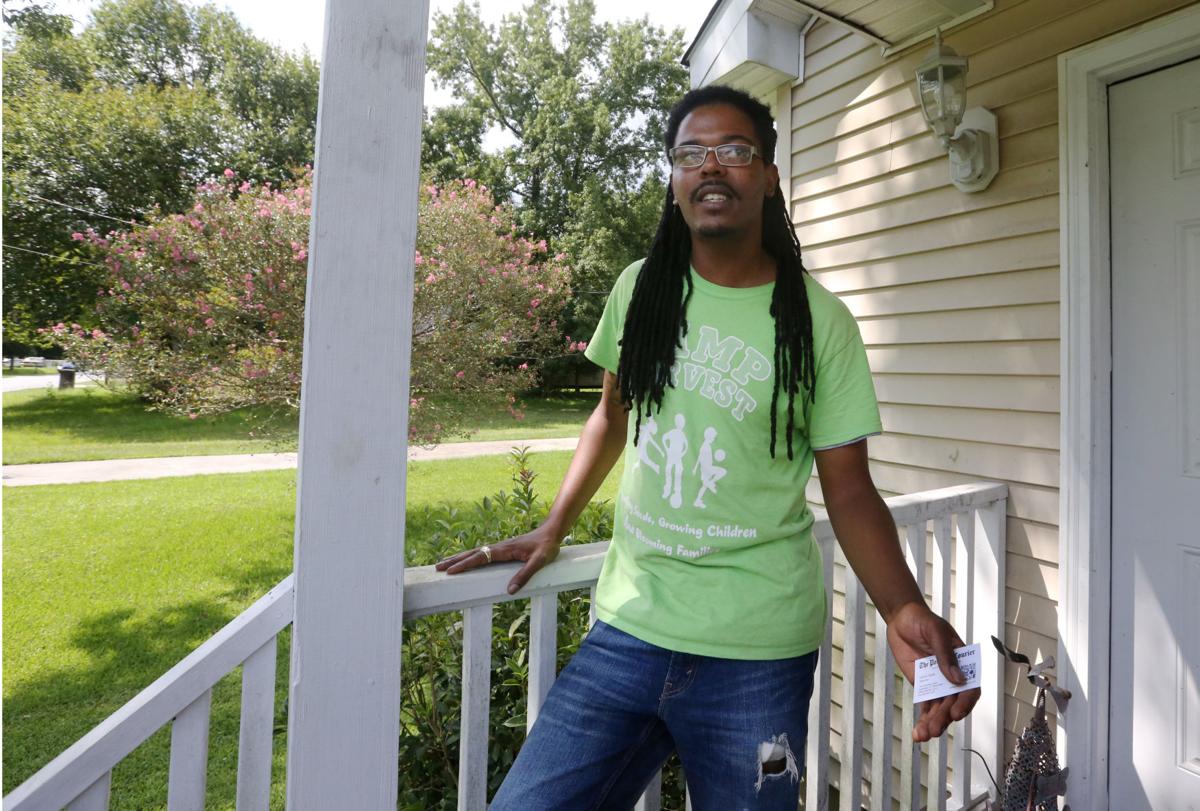 Highland Terrace resident DeAndre Gadsden talks about the planned $1.1 billion realignment of the I-26/I-526 interchange, the widening of I-526, and the impacts on the community and possibly his own home. Brad Nettles/Staff 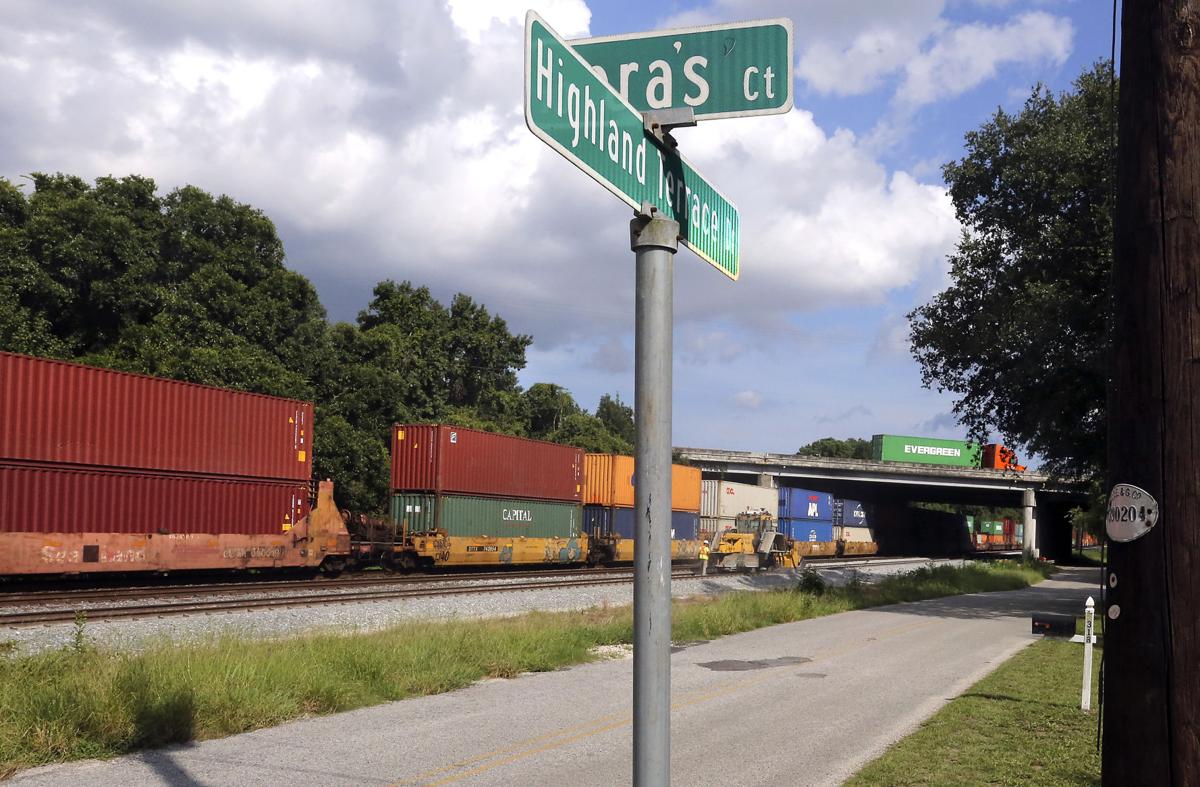 The residents of Highland Terrace in North Charleston are surrounded by the interchange of Interstates 26 and 526, a freight rail line, and Charleston International Airport. Brad Nettles/Staff 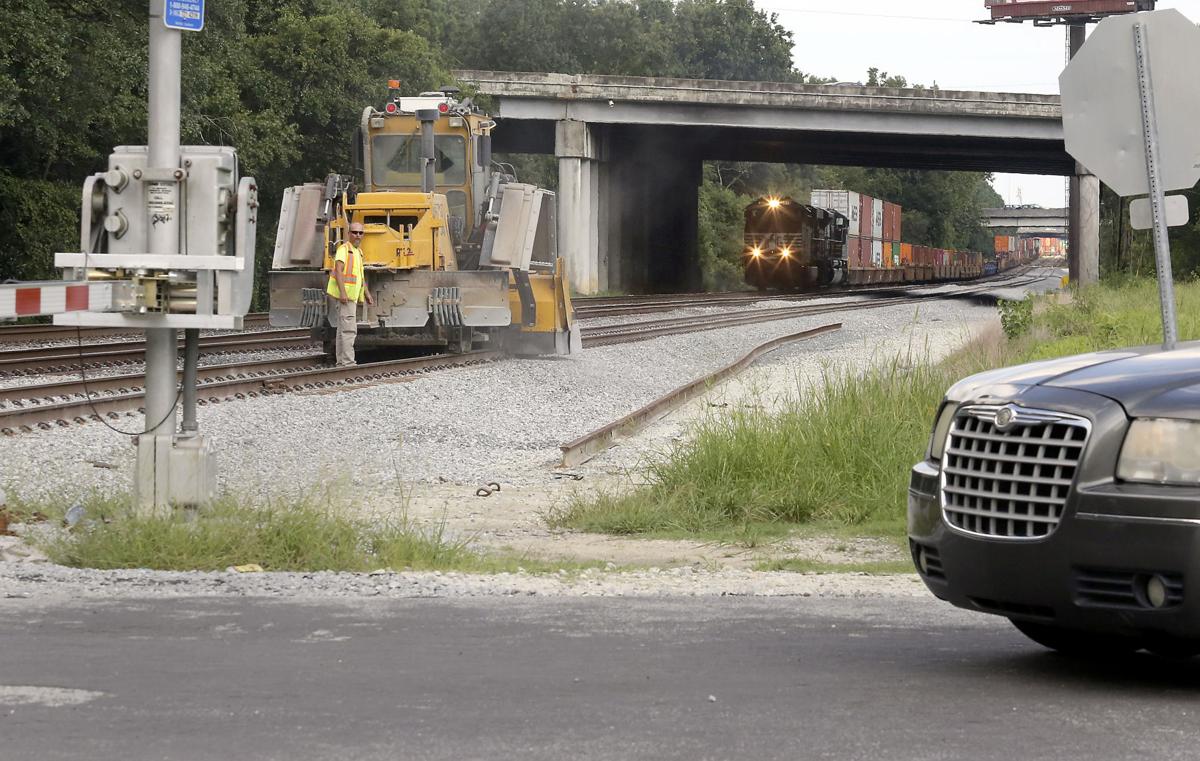 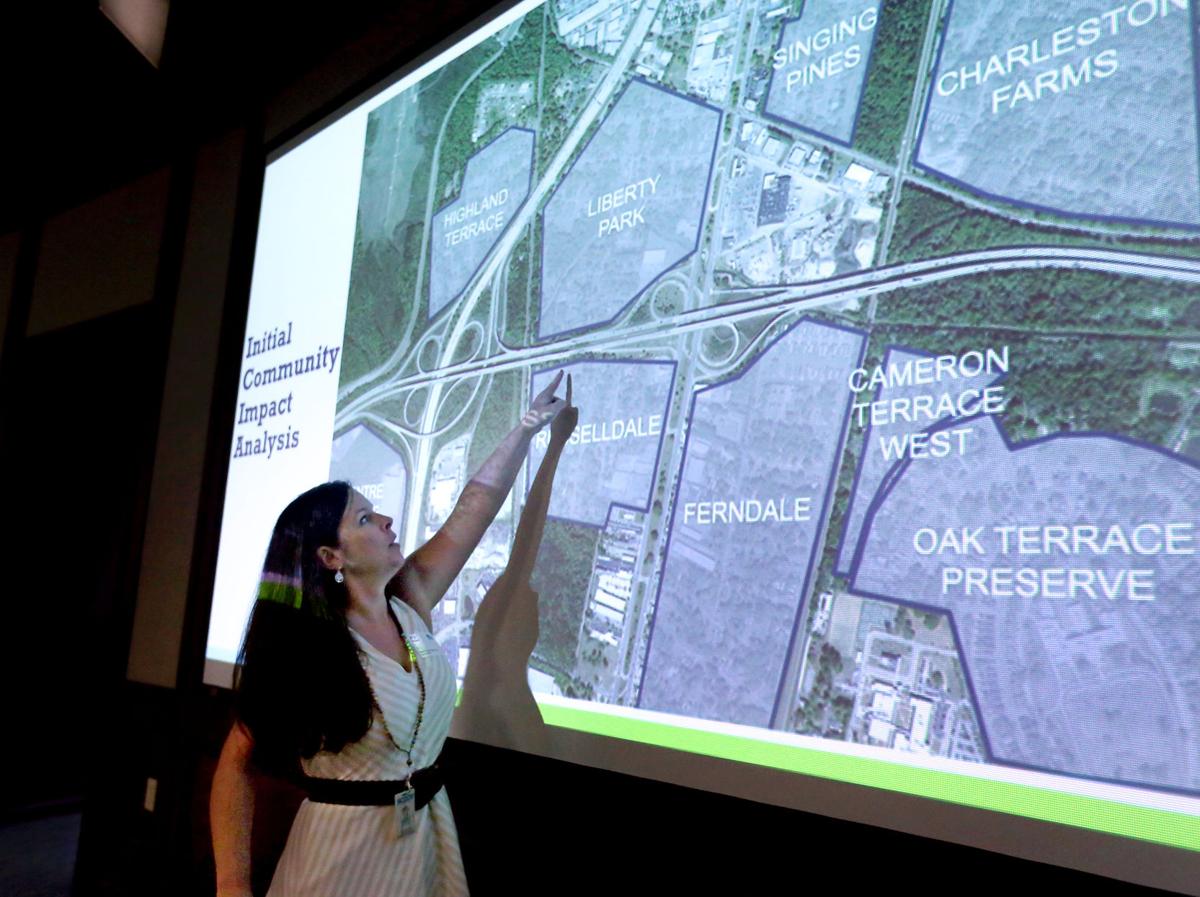 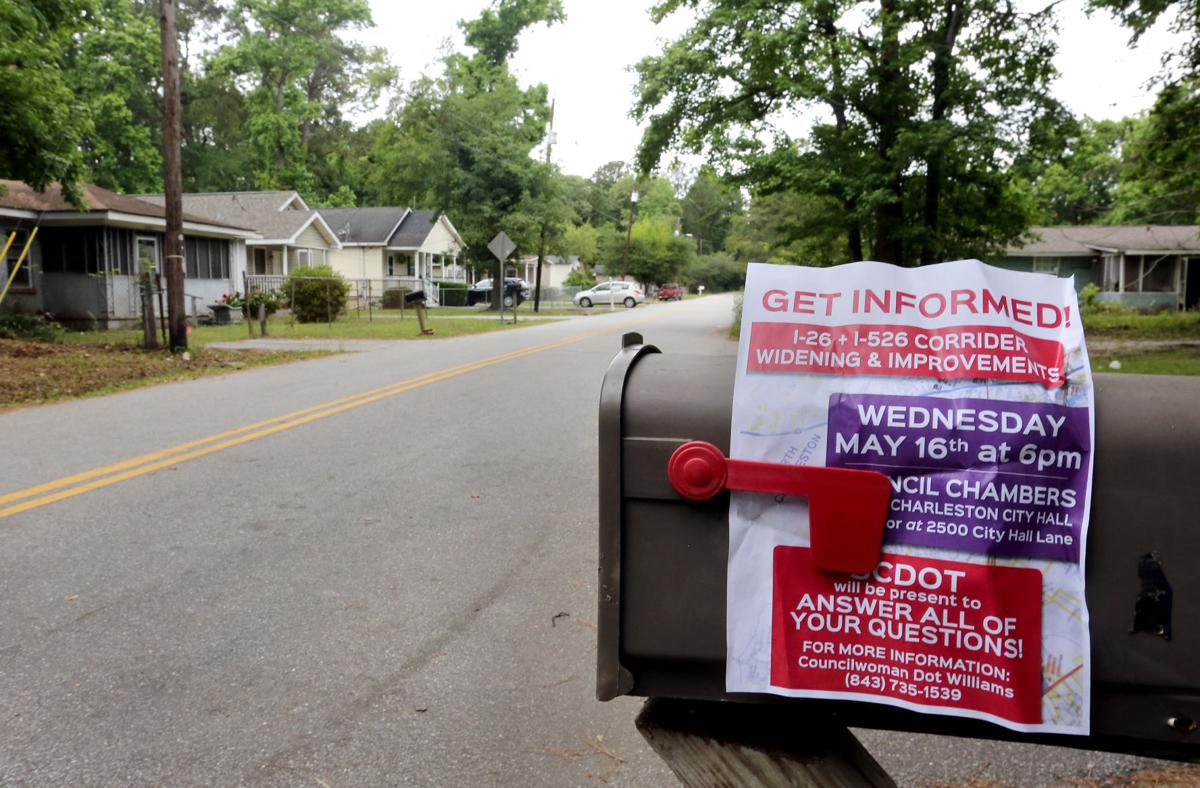 North Charleston council member Dot Williams placed flyers on mail boxes in the Highland Terrace neighborhood in advance of a 2018 meeting about the I-526 and I-26 road project. Brad Nettles/Staff

Highland Terrace resident DeAndre Gadsden talks about the planned $1.1 billion realignment of the I-26/I-526 interchange, the widening of I-526, and the impacts on the community and possibly his own home. Brad Nettles/Staff

DeAndre Gadsden bought a starter home in December 2016, but while he was still celebrating becoming a first-time homeowner, he learned his house could be in the path of a massive highway widening project.

"In January, I got a note about the highway being widened," he said. "I was so upset."

The interchange where interstates 26 and 526 connect sits just beyond the trees at the end of Good Street, where Gadsden lives in Highland Terrace. He and hundreds of residents in several North Charleston communities are nervously awaiting details about a $1.1 billion plan to redesign the interchange and widen I-526.

It's a road plan that will reshape the commute for countless Charleston area residents, by widening I-526 to eight lanes and reconfiguring the interchange where rush-hour traffic typically slows to a crawl. The cost is enormous, the work will take years, and many details that will directly impact residents' homes and properties are yet to be revealed.

Gadsden stopped making improvements to his home last year. He doesn't know if the state will buy and demolish his house, but why build a new fence if they might, he figured.

Gadsden's representative on North Charleston City Council, Dorothy Williams, also lives in Highland Terrace. She's so certain the S.C. Department of Transportation will take the home she owns, where she was raised, that she broke down in tears during an interview. But she doesn't really know for sure.

The "I-526 Lowcountry Corridor West" project is the first in a pair of road plans aimed at expanding I-526 from its western end near Citadel Mall in West Ashley to its eastern end in Mount Pleasant. The "West" project will go as far as Virginia Avenue in North Charleston, just before the Don Holt Bridge.

“A lot of high-level traffic studies have been going on," said Joy Riley, project manager for the DOT. "There are three or four residential communities in North Charleston that are in the study area."

Like many road projects prompted by the Charleston area's rapid population growth — and the traffic that comes with it — the interstate work will require the taking of many homes and other nearby property.

"People are nervous," Williams said. "People are calling me constantly."

People across SC must move so road can be widened. 'It's devastating when it's you.'

Riley said some properties in Ferndale, Highland Terrace, Liberty Park and Russelldale are as close as 30 feet to one of the interstates.

“For early right-of-way acquisition we’re looking at approximately 87 lots," Riley said. “We just know that adding two lanes on each side will be 'X' feet, and then we want to have a 75-foot buffer.”

Making up for the past

In Highland Terrace, some residents are old enough to remember when I-26 was built, right through their lower-income and predominantly black community.

"I do know that we need wider roads, but give us a break," said Williams, who was a high school student when I-26 was built through her neighborhood. Later, I-526 was built along the south end of the community, and Charleston International Airport grew along the western side.

"Every time they want to make any improvement, they move the black people out," Williams said. "It's always been us, not just in Charleston and North Charleston. My sister lives in Atlanta, and she had to move so they could build a stadium."

In the 1960s, I-26, the Crosstown Expressway and the Silas Pearman Bridge each sliced through lower-income and predominantly black communities. In later years, I-526, Hungryneck Boulevard in Mount Pleasant, the Global Gateway port project on Daniel Island, and the Port Access Road did more of the same.

Road improvements can mean loss of property for some

If there's good news for North Charleston residents fearing the government will take their homes for the Lowcountry Corridor project, it's that federal "environmental justice" rules currently require the state to consider the impacts not only of the current road project but also of previous ones.

"They were there before the original interstate," Riley said. “In the past, maybe that’s where the cheapest land was, but unfortunately that meant the minority, low-income communities were carrying a disproportionate share of the impacts."

“There will be a huge mitigation process," she said. “With this project, we may even look at constructing some new homes."

The high cost of housing in the Charleston area, and the relatively low property values in the communities near the I-26/I-526 interchange, mean that the state may take unusual steps to compensate homeowners.

Federal rules allow for added compensation in such a case. The goal is to make residents whole, with comparable homes in the same communities — not just giving them a check and leaving it up to them to find a new home.

“We are most likely going to have to create replacement housing," Riley said. "That may be the only way we can keep people in their communities so that they will benefit from the mitigation."

Highland Park resident Annie Hammond, 82, said she hopes she'll be able to stay in the Langston Street house where she's lived for 31 years.

"I hope they could do something else, besides move people here," she said, while sweeping her front walk Monday.

In Russelldale, a community on the southwest corner of Rivers Avenue and I-526, neighborhood president Tony Grasso said there's no point in speculating about what will happen. A resident since 1983, he owns a home and two vacant lots there.

“You’re not going to stop progress," he said. "My house might get taken, for all I know, but it’s not time to worry until you know your property is in that (path)."

He said residents are concerned about being fairly compensated, if they lose property or their homes.

“What is fair value to an 80-year-old person who has a house that’s paid off?" Grasso said.

Though short on details, DOT has held informational meetings and created a project website that includes videos about the process of acquiring private land and compensating owners. What's been missing are specifics about the project's footprint and which properties may be affected.

Riley said highway planners have been developing options — alternatives that must be evaluated as road plans go through the federal approval process, in order to get federal funding.

In November, DOT plans to hold meetings that will, for the first time, show the potential impacts on properties needed for right of way. The agency has identified residents in Russelldale, Ferndale, Liberty Park and Highland Terrace to serve as liaisons on an advisory council, and the agency plans to hold community-specific meetings.

“We’re just at the beginning of that process where we try to engage the community," Riley said.

For commuters awaiting traffic relief, dreading construction-related delays, or both, it will be years before any road work begins. DOT's schedule projects a federal decision on the eventual road plan around the end of 2021.

Once the plan is approved, construction is projected to take between three and four years.

In the communities where residents have spent more than a year waiting and wondering if they will lose their homes, details can't come soon enough.

'We got nightmares': North Charleston residents who may be displaced by I-526 meet with SCDOT

More Information on the I-526 West project

On Facebook the project's page is "I-526 Lowcountry Corridor."

Mail should be sent to: