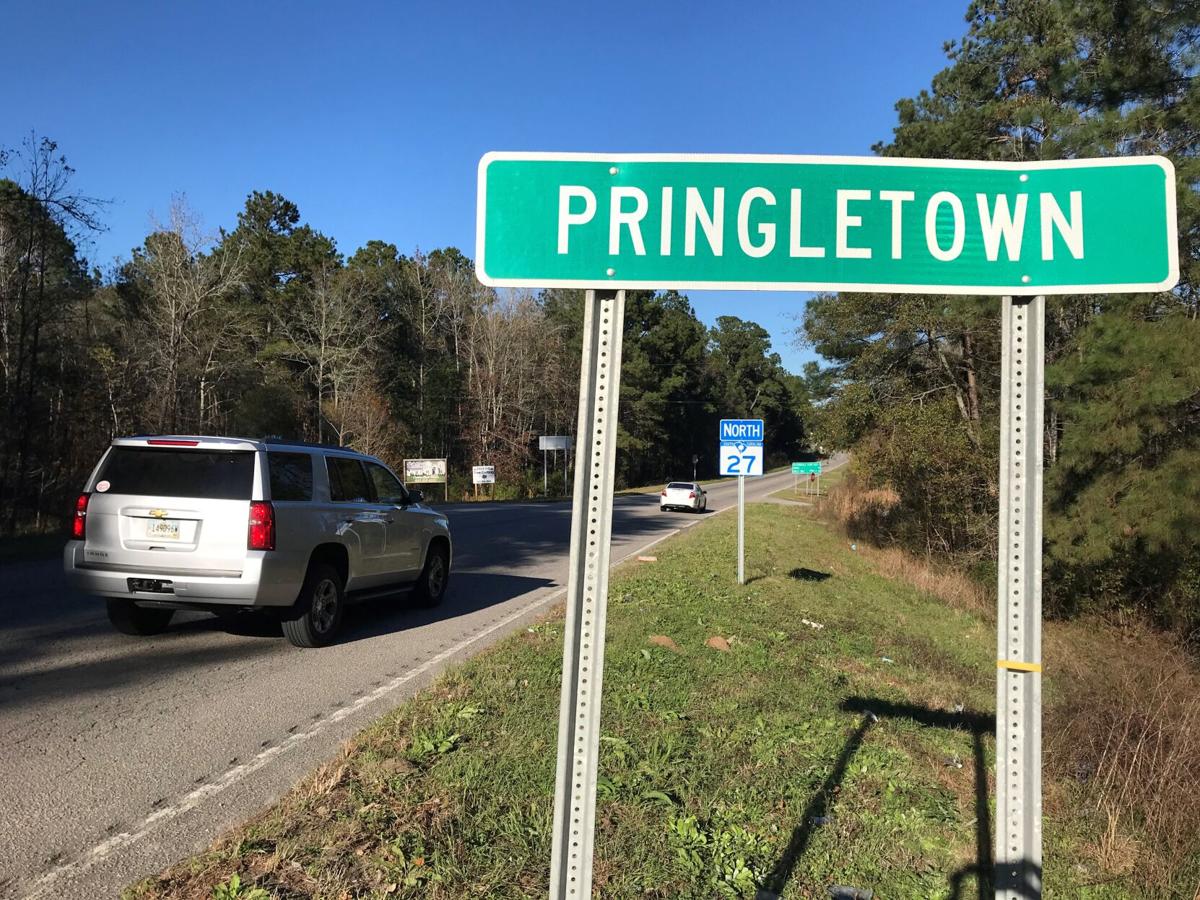 Pringletown is a rural, unincorporated community off Interstate 26 on the western edge of Berkeley County. A new apartment community planned on a wooded tract just past this sign will bring new development to the area on S.C. Highway 27. Warren L. Wise/Staff 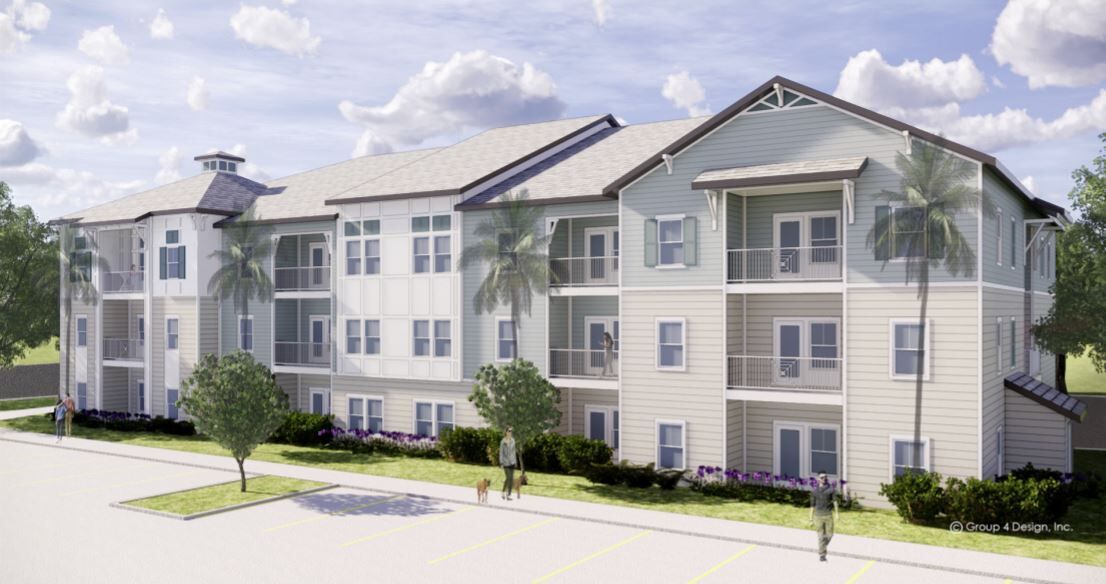 A 240-unit, workforce housing apartment community called The Preserve at Ridgeville will break ground by the spring in Pringletown at Interstate 26 and S.C. Highway 27 in Berkeley County. Group 4 Design/Provided

PRINGLETOWN — Dana Washington recently signed a lease to open a new country-cooking restaurant after the new year beside a convenience store and gas station on rural S.C. Highway 27 just off Interstate 26 on the edge of Berkeley County.

She didn't know a 240-unit apartment development is planned adjacent to the community's lone gas station.

"That's exciting," she said. "That's going to bring business and jobs to this area."

Fueled by the nearby $220 million Walmart distribution center that broke ground last week 1 mile south of Pringletown and the nearby Volvo Cars manufacturing plant, growth of the rural enclave of modest homes, churches and a scattering of businesses at Exit 187 is about to take off.

A 240-unit, workforce apartment development is proposed at 1050 Old Gilliard Road just north of Exit 187 at S.C. Highway 27 and Interstate 26. The site is one mile north of the new Walmart distribution center on U.S. Highway 78 and just west of Volvo Cars manufacturing plant. It's the farthest westward push of large-scale apartment development so far from metro Charleston.

The I-26 intersection sits on the border of Four Holes Swamp, and the proposed workforce apartment project represents the farthest westward push of new development along one of the Charleston region's major traffic arteries.

Thirty-five miles from downtown Charleston, the $37 million apartment community is proposed on about half of a 27-acre wooded tract at 1050 Old Gilliard Road, also called S.C. Highway 27.

The Georgia firm is partnering with Ecstatic Properties of Columbia and Material Capital Partners of Mount Pleasant to build the apartments.

An environmental assessment of the site found no significant impacts from the planned construction project, according to the Rural Housing Service. The developer has applied for funding through the federal agency for the project, called The Preserve at Ridgeville.

"The ethos for the project is to provide nice and affordable workforce housing," said Eric Conkright, vice president of finance for Piedmont Private Equity. "That's a big need for that location."

Conkright didn't want to speculate on what the price per unit will be in two years when construction is completed, but he said apartments will most likely be priced about $200 less than the market rate for the area.

"They will meet the affordability requirements," he said.

Land clearing is expected to begin by the spring after the necessary permits are in hand, with apartment construction over the following 18-20 months.

"The first units are expected to be delivered in the fall of 2022," Conkright said.

How much is apartment rent in each Charleston-area city? Check it out here.

"We will get more people coming in the area now," said Washington as he waited for customers on a slow Saturday afternoon at the Daily Mart Shop, a small grocery store in a mostly vacant strip retail center just north of the proposed multifamily development.

"I think Pringletown will become a little Summerville," said Washington, a cousin of Dana, the restaurant entrepreneur.

But not everyone is enamored with the approaching changes.

Pringletown resident Tyreek Tucker likes the fact that new development will bring more jobs and better opportunities, but he sees a downside as well.

"I don't like it that they are cutting down all the trees," the hunter said.

On the apartment site where less than half the acreage will be disturbed, Conkright emphasized nature trails will be included and part of the parcel is wetlands where construction won't occur.

"We will save a lot of the trees on the property," he said. "The buildings will be spaced so we can keep as many as possible."

While the proposed apartment community is the farthest to the west in metro Charleston, it's not the first to express interest along I-26 as the suburbs push past Summerville.

Seven miles to the east of Pringletown, Fred W. St. Laurent Jr. with AgentOwned Realty of Charleston and John Popelka with JSP Realty of Mount Pleasant, through their business partnership JPFS LLC, applied for permits from state environmental regulators earlier this fall to develop nearly 16 acres off of Drop Off Drive near Jedburg Road and I-26.

The application calls for no impacts to wetlands, but the property abuts a small creek called Dawson Branch. The site also is next to Charleston Logistics Center, a new industrial park.

Development begins on first of 2,500 new homes in Nexton's Midtown near Summerville

After working through the entitlement process, St. Laurent said he and Popelka plan to sell the property to an undisclosed regional builder who plans to put about 180 apartment units on the site.

The two bought the land in 2018 for $1.45 million with the intent for it to be used as flex space near the big-box warehouses and distribution centers that have sprung up along I-26. But St. Laurent said he pivoted after learning of the need for attainable housing for the workers in those buildings.

“It won’t be low-income, but they are trying to make it as affordable as they can,” he said of the prospective builder.

As for Pringletown, Dana Washington is ready for the change.

She now operates a small nail salon called Wind Down & Get Nailed next to the small grocery store her cousin operates.

"This plaza was sitting empty for a long time,"  Washington said. "It's good to see that some new development is finally coming this way."

As for her new restaurant venture, called Granny Red's, she now realizes her decision to open was fortuitous.

"It looks like I will be opening at just the right time," Washington said.