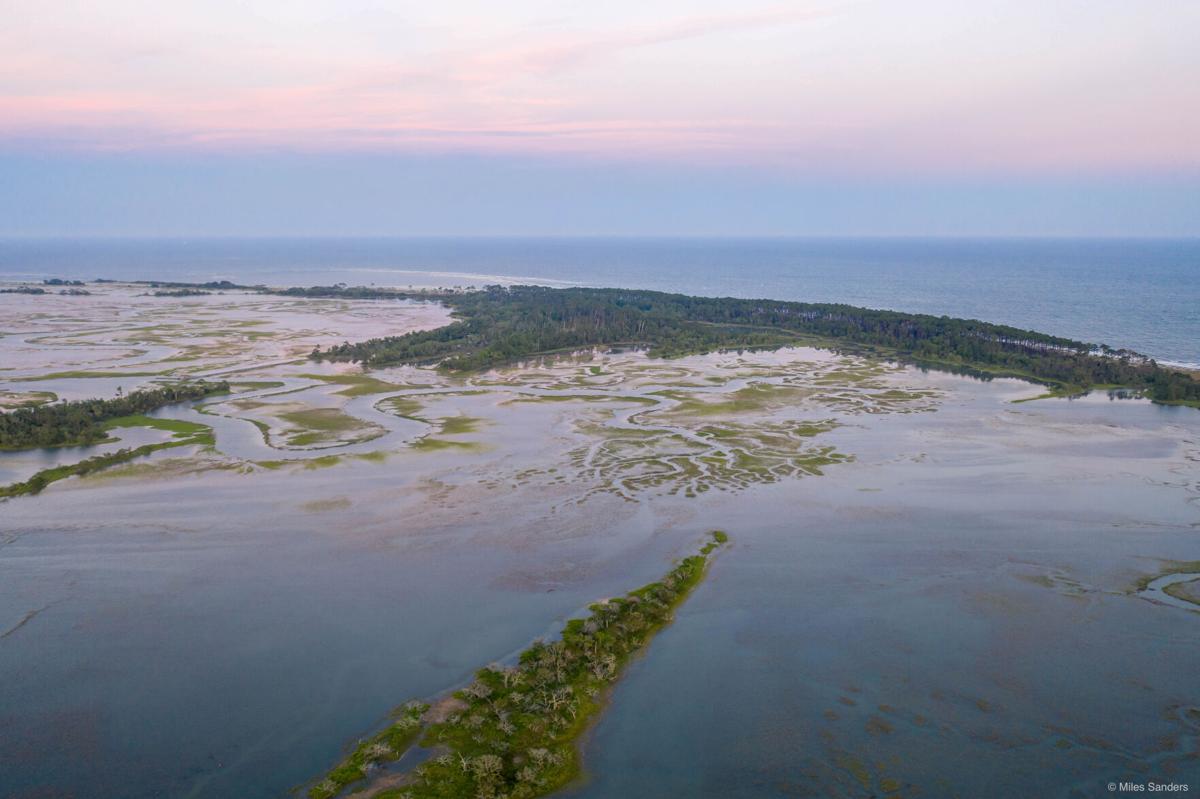 Bay Point Island in Beaufort County is pictured during high tide on May 5, 2020. The island's owners hope to build a high-end, 50-unit resort there, but there has been strong opposition to the plans from some local groups and South Carolina politicians. Miles Sanders/Provided 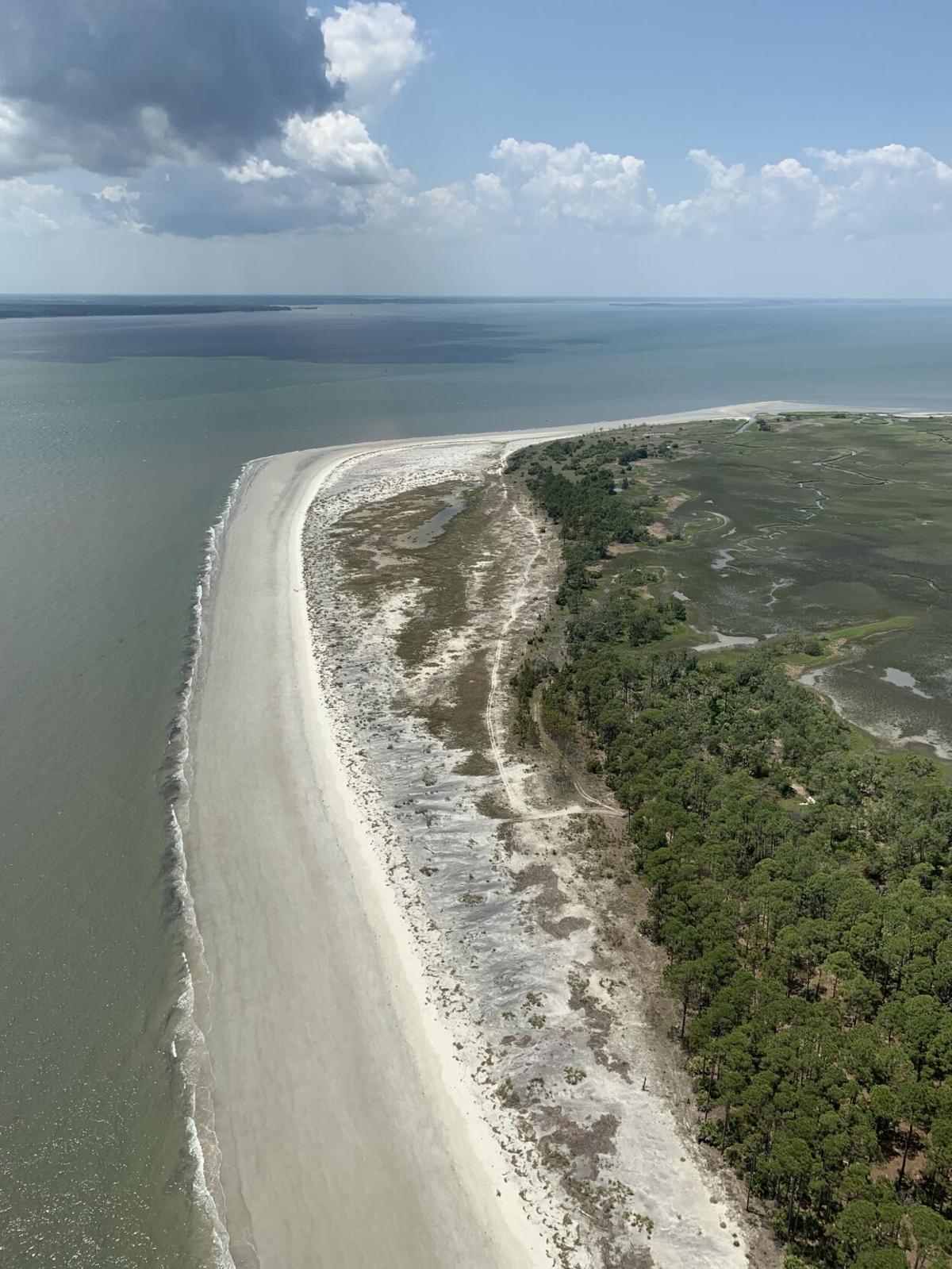 Another South Carolina politician is calling for a high-end "ecoresort" project for an undeveloped Lowcountry barrier island to be turned down, days before the plan is scheduled to be up for a vote.

The proposal, which calls for 50 villas along with spas, dining venues and other amenities on Bay Point Island in Beaufort County has attracted opposition for months, and a key decision on the project may be close: A county zoning board is supposed to review it next week.

U.S. Rep. Joe Cunningham, D-S.C., wrote to the zoning board Monday, urging members to reject the development's request to be considered "ecotourism." He described Bay Point in his letter as "an increasingly rare and invaluable natural resource" that serves as a refuge for wildlife and a buffer from intense storms.

A "large-scale resort" would "compromise each of the valuable benefits the island naturally provides," wrote Cunningham, whose district includes Bay Point Island. The Democratic congressman is running against Republican challenger state Rep. Nancy Mace for the 1st Congressional District seat.

Last month, Gov. Henry McMaster sent a letter to the zoning board calling on it to reject the resort as an ecotourism use. Cunningham's letter raised some of the same points that the Republican governor had addressed.

Both politicians shared concerns about the development's effects on native shorebirds and sea turtles, strain that infrastructure needs could put on Beaufort County resources and the risks of placing new buildings on an erosion-prone barrier island. They also questioned whether the plans were true "ecotourism."

The ecotourism definition used by Beaufort County describes it as “responsible travel to natural areas that conserves the environment, sustains the well-being of the local people, and involves interpretation and education.”

Ecotourism should, "at a minimum," Cunningham wrote, "amplify the history and culture of our community and protect and preserve our natural resources."

"As proposed, the current project does not seem to meet that standard," the letter states.

Since Bay Point is zoned as a natural preserve, the project has to be ecotourism in order for any accommodations use to be located there.

Tom Taylor, a Hilton Head Island-based attorney who represents the owners of the island, said Monday they still believe their plans "meet or exceed" all terms to be considered ecotourism in Beaufort County.

In a response to the governor last week, Taylor wrote that there are people who "object to any development of the privately owned island" and argued this was a development solution that is environmentally conscious.

"There will be no paved roads, no parking lots and no golf courses," Taylor said.

He pointed to the size of the proposed development — it would sit on a 50-acre parcel on the 400-acre island — and how they plan to construct it. The buildings would be made off-site and then barged to the island to minimize impact.

One of the concerns raised in Cunningham's letter was the possibility that use of a helicopter at Bay Point could interfere with military operations at nearby Parris Island or the Marine Corps Air Station. Developers have said a helipad would be installed for emergency situations at the resort.

Neither entity has weighed in on the project, and Taylor said the county hasn't flagged it as a potential issue.

But many of the other points raised in the letter are the same as those that have been echoed by environmental groups like the South Carolina Environmental Law Project and the Coastal Conservation League since late last year.

At least a half-dozen other Lowcountry organizations, like the Port Royal Sound Foundation, Beaufort County Open Land Trust and the Hilton Head Island Land Trust, have issued public statements against the resort plans.

S.C. Audubon has said it is "unconvinced the proposal is compatible with protecting the bird species that rely on" Bay Point, which is a designated Important Bird Area.

One of the most vocal opponents has been Marquetta Goodwine, who goes by Queen Quet as chieftess of the Gullah/Geechee Nation. Both Cunningham and McMaster mentioned the Gullah-Geechee community in their letters and stressed the importance of preserving their culture in the area, which has included using the waters around Bay Point as a fishing ground.

Taylor said the developers  — who include island owner Philippe Cahen, Bluffton landscape architect Josh K. Tiller and Tim Pitcher and Art Krebs of Louisville, Ky.-based Luckett and Farley Development LLC — have never "expressed any claim over the fishing waters" and have no plans to restrict anyone's access to them.

Members of the community have argued that, even if access to the waters don't change, the presence of a new development on an island that has no businesses or major structures now would disrupt the area's ecology.

As of Monday, an online petition started late last year by the Gullah/Geechee Sea Island Coalition had collected more than 27,800 names, several thousand more than it had a month ago. An update posted on the petition last week showed new T-shirts that signers could buy saying "Save Bay Point."

If the plans go through, about 75 guests would be on the island at any given time, by developers' estimates, and they would likely be paying top dollar if the project's intended partner, Six Senses, signs on to run what would be the Thailand-based company's first U.S. resort.

Stays at existing Six Senses properties, which are mostly in Asia or on islands in the Pacific, can start around $1,000 a night.

Initially, Beaufort County staff had told developers that their plans couldn't be considered ecotourism, pointing to an emphasis on accommodations.

But the county later came back and reversed that decision after a proposal was resubmitted with more detail and the support of Jon Bruno, executive director of the International Ecotourism Society, which is cited in the county's code as the source of its ecotourism definition.

Bruno said he was paid his expenses and a daily rate to help the development team write their revised proposal early this year.

The county staff's OK allowed the plans to advance to the zoning board for a vote on the special-use permit needed for an ecotourism project. Meetings in July and August that had Bay Point on the agenda were postponed.

Bay Point is the last item on the agenda for a zoning board meeting set for next Thursday, Sept. 24, at the Burton Wells Recreation Center in Beaufort.

Juliana Smith, south coast project manager for the Coastal Conservation League, said the county has "taken great lengths" to ensure citizens concerned about the project can come to an in-person meeting in a venue that has enough space to practice social distancing.

They're still working out a possible solution for people to participate virtually, Smith said.