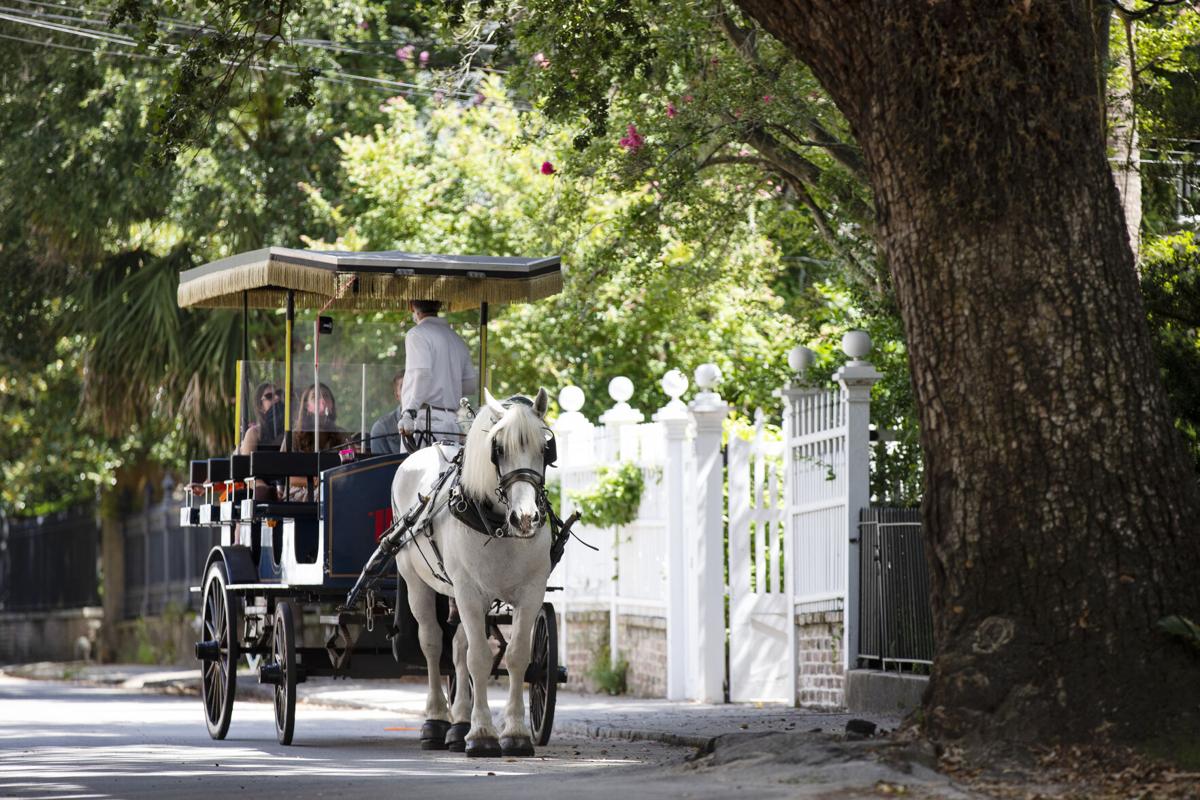 A horse-drawn carriage takes tourists through the South of Broad neighborhood in July. Charleston is the No. 1 small city in America once again among readers of Condé Nast Traveler, the magazine announced Tuesday. File/Lauren Petracca/Staff 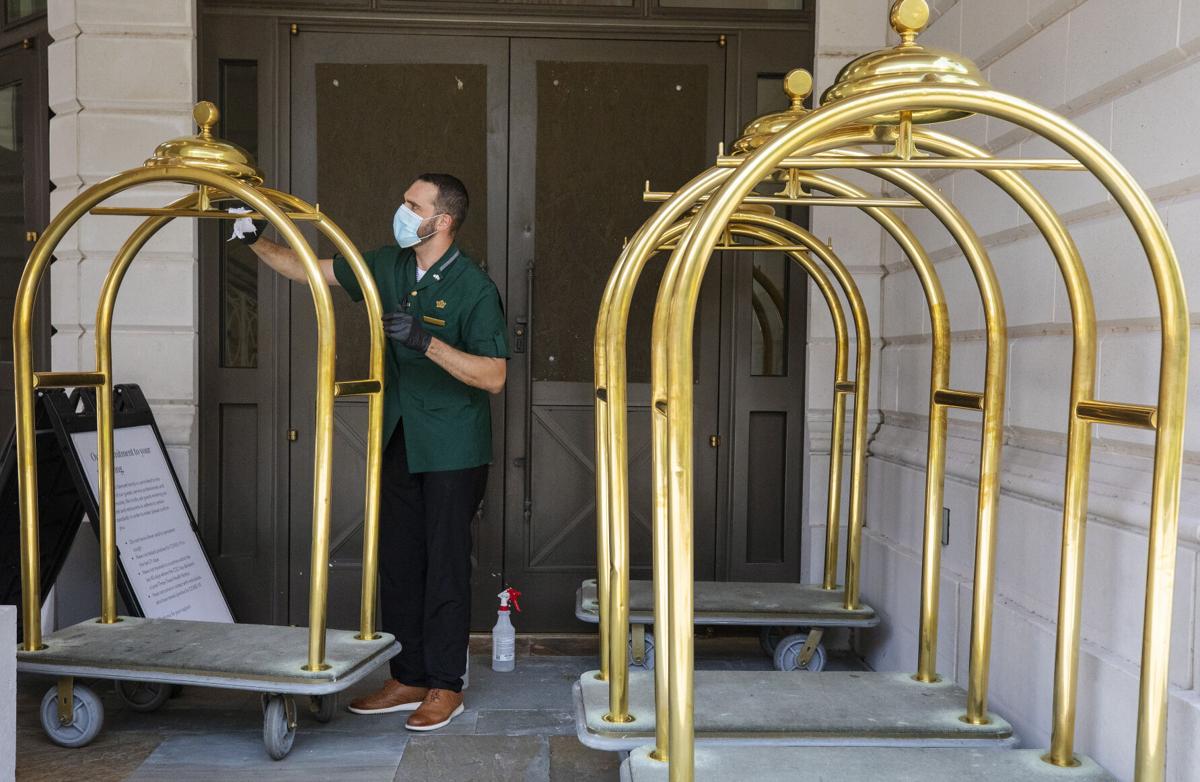 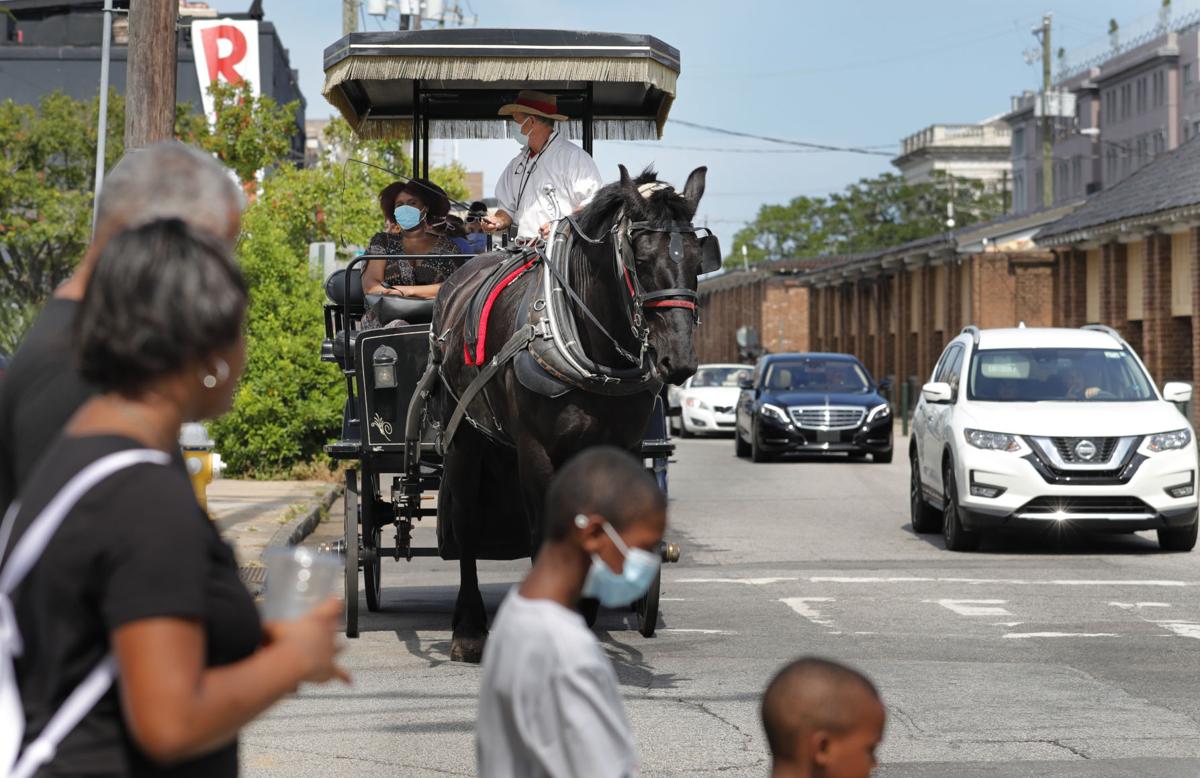 Charleston has been named the No. 1 small city in the U.S. for travel for 10 consecutive years. File/Grace Beahm Alford/Staff

Charleston is the No. 1 small city in America once again among readers of Condé Nast Traveler, the magazine announced Tuesday.

That won't come as a surprise to the Holy City's residents: This year's ranking marks a decade-long streak that Charleston has held that title.

While the region's tourism boosters hope every year to see Charleston in the top spot again, that was especially true this month as travel remains depressed by the coronavirus pandemic. The industry has only gotten more competitive as the pool of potential travelers shrank.

"The whole word is trying to get their visitors back," said Helen Hill, top tourism official for the region and CEO at Explore Charleston.

This year's rankings were calculated based on the survey responses of more than 700,000 readers, the highest number of participants ever in the contest's 33-year run, Condé Nast says. Submissions were solicited online in the spring, when most Americans were quarantined in their homes, so results are reflective of last year's tourism season — Charleston's best on record — and other years past.

The sector had grown to about $9.7 billion, and 7.4 million travelers came to the region in 2019, according to an annual report from the Office of Tourism Analysis at the College of Charleston.

In recent years, the annual growth of those metrics and a steady stream of top rankings have been consistent. Earlier this year, Charleston secured an eight-year run as Travel + Leisure's top U.S. city and four consecutive years as Southern Living's best city. Meanwhile, the run of year-over-year growth for Charleston's travel sector was broken by the pandemic.

Streaks are not new for Condé Nast's survey. When Charleston claimed the No. 1 ranking for the first time in 2011, it unseated San Francisco, which had held the spot for 18 years. Santa Fe has been at the Holy City's heels now for three years in the runner-up spot. All but one city in this year's top 10 was on the list at least once in the last four years, and seven of them made the ranking in 2019.

Since this year's reader surveys were submitted while the world was on lockdown, the picks are "enduring gems that can withstand the test of time and the vicissitudes of circumstances," the magazine wrote in its introduction. Travelers "want to turn their attention to the classics" post-pandemic, it says.

After two years in the top four, Savannah dropped to No. 8. Greenville in South Carolina's Upstate moved up from ninth to sixth and is described on the list as being "on the cusp of stardom."

The magazine's blurb for Charleston was similar to those in years' past, calling it a small city that "punches well above its weight" with a robust food scene and an appealing aesthetic. It tells travelers to "try to resist the urge to up and move here," a statement that rings true especially with updated estimates last week that an average of 30 people are moving to the region a day.

Over the last few years, the accolade has been accompanied by grumblings that Charleston is being burdened by "overtourism" and doesn't need the extra exposure. But this year, with tourist traffic greatly reduced during the pandemic, talk about there being too many out-of-towners has faded, at least for now.

Charleston's visitor sector has faced a number of headwinds in 2020, but having too many tourists isn't one.

Statewide, tourism director Duane Parrish has predicted the sector would be halved this year because of the pandemic. More recently, he said it might be slightly better than that, a reduction of about 45 percent.

During the last full week of September, Charleston-area hotels were half full — their highest occupancy level since the end of June.

Hospitality workers have lost their jobs in higher numbers than any other sector. At the most severe point of the shutdown in mid-April, about two-thirds of those who had tourism-related jobs in the Charleston area were out of work.

When the industry started to reopen, early success over Memorial Day weekend stoked hopes of a summer recovery. But as those metrics rose, so did cases of COVID-19 until South Carolina emerged as a hotspot for the virus. Tourists were urged, and later required by local ordinance, to wear masks.

And, at the same time, protests that swept the country after the death of George Floyd in May put new scrutiny on how cities like Charleston present their history, particularly the history of slavery, to visitors. In June, the statue of John C. Calhoun was removed from its high perch in Marion Square, a part of the city that's surrounded by hotels and restaurants.

In August, nonprofit museums, arts organizations and local municipalities found out that thousands of dollars in funding they typically received from the county wasn't coming. Not enough people had been staying in Charleston-area hotels to pay for the accommodations tax grants that were planned.

And the Charleston Wine + Food Festival, one of the biggest tourism draws of the year, canceled its next festival, a preview of the effects of the pandemic that will continue into 2021.

Now about a month from when travel to the Charleston area typically slows, the priority is to "get everyone to the spring," Hill of Explore Charleston said.

While some restaurants have permanently closed during the pandemic, Michael Tall, the tourism marketing group's board chair, said he isn't aware of any hotel properties in the region that are at risk of closing their doors.

He pointed out that, though the region has been trying to grow its market for business travel and add more meeting space in recent years, the fact that most visitor activity in the region comes from leisure travel is beneficial right now as corporate travel and conventions are likely to lag the longest.

Weddings are the group business that is "closest to normal" this fall, he said.

In addition to reaching the decade mark with Condé Nast, there have been a couple of other recent pieces of positive news for the visitor industry, Hill noted, including the announcement that JetBlue would launch a new nonstop flight from Charleston to Los Angeles and Boeing Co.'s decision last week to consolidate production for its 787 Dreamliner jet in North Charleston.

Tuesday's awards included a ranking of Charleston's 10 best hotels, which, in a repeat of 2019's version, was led by the French Quarter Inn. The Spectator, Wentworth Mansion and The Dewberry rounded out the top four.

Five South Carolina resorts were ranked in the south's top 20, including the Sanctuary Hotel on Kiawah Island and The Beach Club in Mount Pleasant.

Charleston International made the cut for the magazine's list of the best airports in the U.S. again, but it moved down from No. 7 last year to ninth.

Of the top 10 islands named by Condé Nast readers, three are in South Carolina. Hilton Head took the top spot in that category. Kiawah and the Isle of Palms finished at No. 5 and No. 7, respectively.